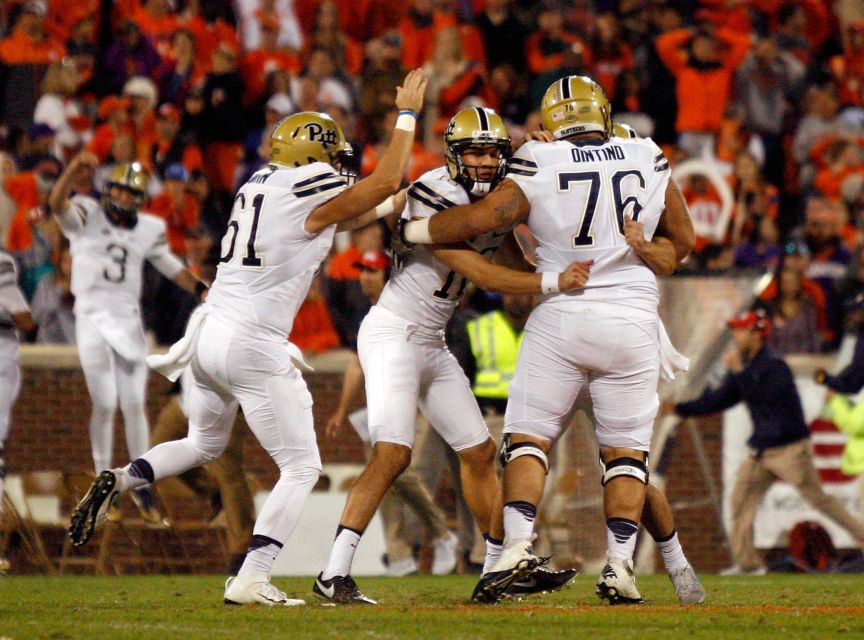 Well, this past weekend of college football was…interesting wasn’t it? For the first time since October 19, 1985, the AP ranked #2, #3 and #4 all lost on the same day. As usual, the Crimson Tide are the last undefeated standing. So we know where they will stand in the College Football Playoff, but with all these losses, where does everybody else stand? Let’s dive into this week’s Hot Takes, courtesy of myself and college sports hoss Logan Crosland:

Clemson couldn’t dodge this bullet: The Clemson Tigers have spent most of this season escaping one win after another against opponents hungry to knock them off. Well, somebody finally did. Chris Blewitt’s 48 yard field goal with six seconds left gave Pittsburgh a 43-42 win over the Tigers to knock them from the unbeatens. DeShaun Watson threw for an ACC record 580 yards but for the first time this season the Tigers defense was not at its best, getting beat consistently for long pass plays and three giveaways didn’t help either. Will they get lucky and only move down a slot or two, or get bumped all together?

What Auburn could have had: With all these upsets Saturday, the Auburn Tigers were in a great position to be among those fighting for one of the four spots, but Saturday they instead put out one of the most putrid offensive performances in team history in a 13-7 loss to Georgia between the Hedges. Auburn had seven straight three and out possessions and 32 yards of total offense in the second half as Georgia kicked two field goals and pretty much clamped down on defense to get the win. Freshman Jacob Eason had 208 yards passing and Georgia scored a touchdown on defense.

Buckeyes rise from the ashes: After that gut-wrenching loss on 10/21 to Penn State, and the almost loss to Northwestern, Urban Meyer has not called the dogs off in Ohio State’s last two games, outscoring Nebraska and Maryland 124-6. Waiting in the weeds has paid off for the Buckeyes as with three unbeatens losing, they are right back in the race for the playoff. A road game this week with Michigan State is a prelude to the war in Columbus in two weeks with Michigan, perhaps the biggest game in the history of the rivalry. Wisconsin and Penn State are still in the mix, so the Big Ten is really making things sticky in the national scheme of things.

Where has this ND team been: Scott’s been here on the Hot Takes crushing his Fighting Irish for their lackluster play. They finally showed the talent they should have been showing off all year on Saturday in a 44-6 win over Army in the Shamrock Series game at the Alamodome. DeShon Kizer had three TD’s and the Irish had 476 yards of total offense as ND runs its record to 4-6. With Virginia Tech and USC left, a bowl bid is probably not in the cards. Honestly they don’t deserve one, they would get waxed by anybody.

Academies Update: Army’s loss to ND drops them to 5-5 after a 3-0 start. A win this week over Morgan State will give them a bowl bid. Navy will look for their eighth win this week against East Carolina, a bowl bid already secured. As for Air Force, they’ve locked up the Commander in Chief’s trophy and have won three straight after a three game losing streak. They have San Jose State this week before a big game next week with #20 Boise State. An Army win will make all three service academies bowl eligible for the first time in quite a while.

Michigan Upset By Iowa: Michigan all season had looked like the most dominant team in the country, other than Alabama of course. They have only had to game that ended up within 10 points, those being Michigan State and Wisconsin. Other than that they have been dominant and have blown out the rest of their competition. On Saturday they traveled to play the Iowa Hawkeyes in Iowa City, which is always a tough place to play. Despite this, most people assumed that Michigan would win big. The Iowa defense came to play though, and the Hawkeyes were able to score a big upset 14-13 on a last second field goal.

USC Spoils Washington’s Perfect Season: Washington’s offense has been a marvel to watch all season. They came into Saturday’s game against the USC Trojans averaging 48 points per game. Needless to say, this game was expected to be a shootout. USC’s defense was able to stop Jake Browning and the Huskies offense to not only 13 points, but only 1 touchdown. Washington will more than likely need to win out and have a couple of people in front of them lose, to make the College Football Playoff.

Pac-12 Race Getting Tight: Colorado and Washington State now sit atop each of the divisions by themselves. Ironically, they play each other in Boulder next weekend. The Buffaloes need to win out to make it to the Pac-12 Championship game, as USC and Utah sit only a game behind them. USC holds a head-to-head victory over Colorado, while Utah holds a victory over USC. The Utes play the Buffaloes in the last week of the season, and if they win that game the division belongs to Utah. Washington State on the other hand can lose next weekend to the Buffaloes and still win their division. Either way they need to defeat Washington in the final game of the season, a game dubbed the Apple Cup. It will definitely be a fun race to watch.

LSU Runs All Over Arkansas: LSU was coming off of a game, where they only rushed for 33 yards against Alabama. Well, apparently that pissed them off really badly. The Tigers traveled to Fayetteville to play the Razorbacks and unleashed a running attack that couldn’t be stopped. The Tigers were able gain 390 yards on the ground, while scoring all 5 of their touchdowns on the ground. Fournette ended up with 3 TDs and Derrius Guice added 2 more. Arkansas has proven if you can run the ball on them and can play any semblance of defense, that you can beat them.

Now a look at what the College Football Playoff Semifinals look like as of now:

Well as you can see Ohio State has been revived and back in the mix, while teams like Louisville are feeling better about themselves too. The Big Ten will work itself out, because obviously either Ohio State or Michigan will be bumped out in two weeks when they play each other. The schedule starts to get very fun now with rivalry games popping up, and a few impact what you see above. Here’s the biggest games of the week (All games Saturday unless otherwise noted):

#5 Louisville at Houston, Thursday at 8pm: This game would have been really huge about six weeks ago. Still, Louisville can’t look past the Cougars.

#2 Ohio State at Michigan State, Noon: Is this an ambush game for Urban Meyer? Absolutely not. The Spartans will hang around early, but the Buckeyes want Michigan when it matters.

#22 Washington State at #10 Colorado, 3:30pm: With the Huskies losing, this opens the door for the Cougars to win the North. In fact this could very well be the Pac-12 Championship game in a few weeks.

#9 Oklahoma at #14 West Virginia, 8pm: Two more teams sniffing a playoff spot could eliminate the other from the mix with the win here. Big game in Morgantown.