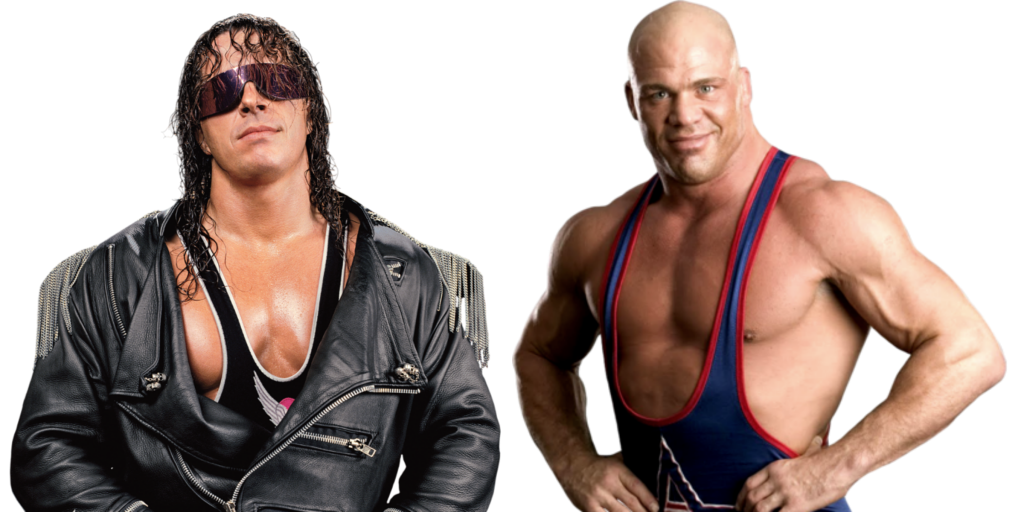 Desert Island: You can bring complete DVDs of one of these two wrestler’s matches to bring with you: Bret Hart or Kurt Angle Who do you choose and why?

Jeffrey Walker: I would choose Kurt Angle because I started watching during his era and I would see a ton of my other favorites.

Michael Ingo Gutenberger: Bret was and is overrated in my eyes, so I’ll take Kurt.

Billy McNeil: Kurt Angle. Much wider variety of matches and styles, not to mention opponents.

Greg Phillips: Bret. He’s my all time favorite wrestler, and you’ll get more variety in storytelling and opponents. No knock at all on Kurt, but Bret’s the best at catering to his opponents’ styles and creating something new and different.

Adam Wirth: Both great. Bret was better. I’ll go with The Hitman.

Neil Trama: Bret Hart. Longer period of time with more different styles…awesome 80’s tag team stuff, different main events against tons of different opponents, and my all time favorite match vs. Steve Austin. Kurt Angle dooms me to way too much TNA. Now if it was Bret or Shawn…?

Mister Ooh-La-La: Bret Hart. He had a longer run in the WWF and I enjoyed the angles surrounding Bret’s matches more than Kurt’s so I was more emotionally invested.

Paul Kilburn: Bret. Covers more eras with the Stampede stuff, get Ventura & Heenan instead of Don West and Michael Cole, prefer his big matches and I’ll have that Stampede Tag. Do like Kurt though…and Kurt is funnier.

Logan Crosland: Bret Hart for sure!

John Hickey: Bret, cause you get the Hart Foundation matches.

Taylor Keahey: I can’t imagine choosing Kurt over Bret in this scenario simply due to the breath of Bret’s work being so much broader. I oddly didn’t like Angle during his initial run. He coincided with me going to college and dropping wrestling as a major interest. I’ve since come around, of course. But man, can’t see choosing his work over Bret’s on the ‘ole desert island.

Jay Hinchey: Oh this is tough. I give a slight edge to Bret Hart. Can’t wrong with either one.
Andrew Stephen Morgan: Bret Hart. Much better in-ring storytelling.

Dustin Motley: I was gonna go with Austin but then remembered Shawn’s long run after he came back so I’d go Shawn.

Jason Sherman: I gotta go with Kurt, here. I love Bret, but a lot of his run, he has a lot of “paint by numbers” matches, which are good, but can be repetitive. Also, I think the quality of Kurt’s opponents is better.

Chris Jordan: Angle. I find I have enjoyed his matches more, from his first few matches you can see that he “got it” immediately. Then my all-time favorite matches include him, such as Mania 21 with HBK, KOTR 01 with Shane and the six-man from with Edge & Christian from Judgment Day 01.

Darren Smith: Kurt Angle. Hate to say it, but for the most part, if you saw one Bret match, you saw nearly all of them. Kurt has/had a far greater arsenal and many more quality matches. A better one would be Kurt or Shawn Michaels perhaps.

Steve McCullagh: Bret every time. Angle was a phenom but his matches always felt more like performed exhibitions to me.

@wilkysox: Kurt, because I have not seen his TNA stuff and it would be brand new to me. His WWE stuff was so good. 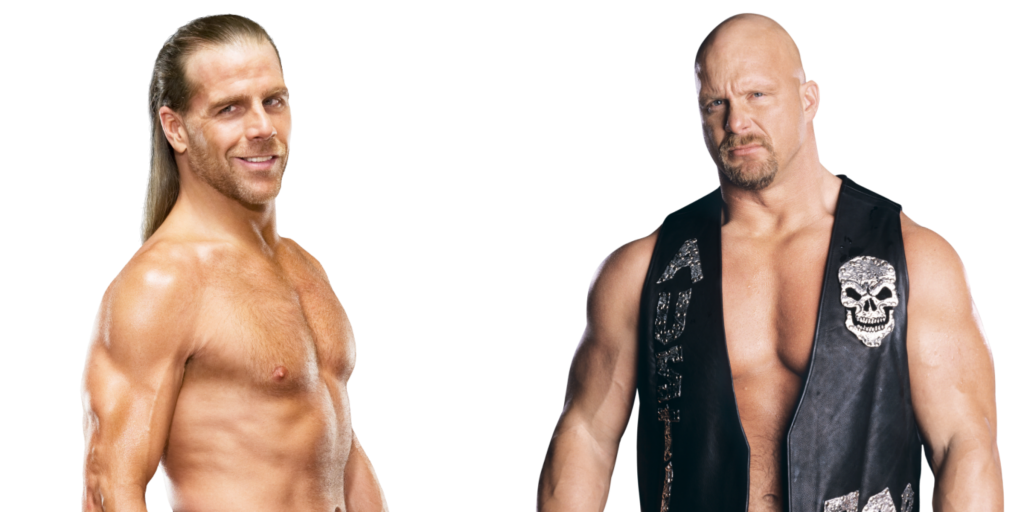 Desert Island: You can bring complete DVDs of one of these two wrestler’s matches to bring with you: Shawn Michaels or Steve Austin. Who do you choose and why?

Ben Morse: HBK all day every day. His matches are just better. Austin may have the better character and extracurricular activities, but Shawn wins matches easy.

Taylor Keahey: Steve for sure. I need to get my WCW fix in there. Think you can march around like the king of your island without that Hollywood Blondes theme song? Let’s get real.

Kevin E. Pittack: Austin. As a fan, I was always just more invested in his matches no matter what. I was never invested in Shawn’s 2 biggest runs, 1996 and the born again phase.

Logan Crosland: If it is purely for matches you have to go with Michaels. His matches are just better. If you included segments and backstage stuff I might go with Austin but if it is purely matches I’ll go Shawn!

Matthew Michalovic: HBK for the win. Unless I can some how sneak Austin’s podcast onto the isle. I would The Professor the crap out of a coconut based podcaster to include that.

Jason Sherman: Man, this is tougher than yesterday. HBK, ONLY because of The Rockers stuff, my favorite tag team ever.

Greg Phillips: Since it’s just matches, Shawn by a country mile. It’s not even close, to my eyes.

Glenn Butler: It’s got to be Shawn–I’m mostly not interested in his 90s singles run, but the Rockers era and the 2000s comeback outweigh it on either side, compared to a much shorter prime for Austin that’s also bogged down by Attitude shenanigans.

Brian Meyer: Austin for me as he is my third favorite ever.

Jay Hinchey: Another tough one. I’ll lean toward HBK.

Neil Trama: Definitely a tough call but ya gotta remember Austin didn’t have that long of a run as a top guy. And since I was always a WWF guy, I’ve gotta go with Shawn. Years and years and years of great stuff encompassing different eras.

Andy Halleen: Steve Austin, even through HBK had an amazing career revival. Austin is one of my all timers from his WWF run but I feel like his short time in WCW is even better actually.

Charles Lynch: Austin is more in line with what I like in a wrestler, but in getting Shawn’s complete catalog, I would get the chance to watch a lot more variety, so he’s my pick. Shawn has worked Central States, the AWA, Memphis, Continental, the WWF/WWE, USWA, SMW and probably more that I am forgetting, so there is tons of variety. Plus, his career spans a lot wider time period, so I would basically get to see stuff over 25 years compared to 14 years. So he’s my pick. 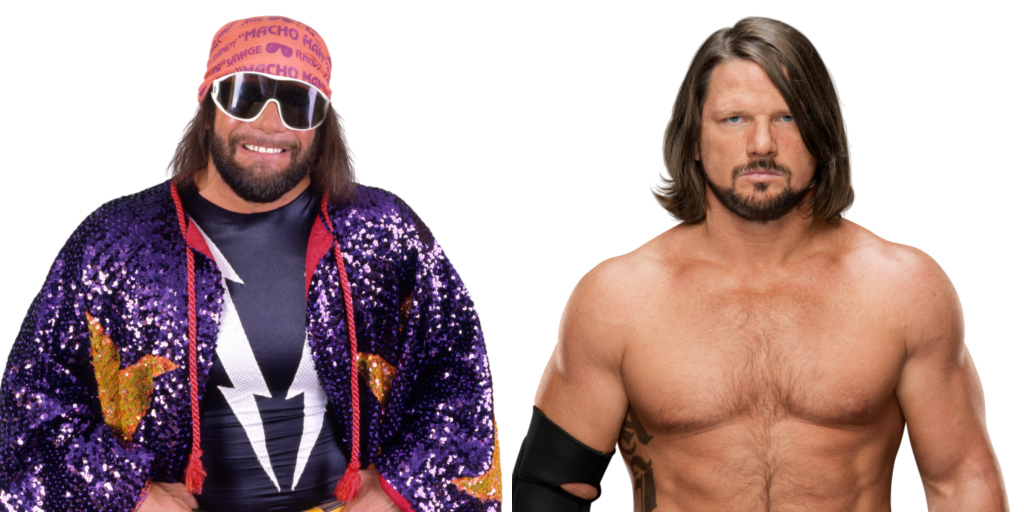 If you could bring a DVD set of one persons entire career (matches, promos, etc.) to a desert island, who would you choose: Randy Savage or AJ Styles?

Dustin Motley: AJ Styles. I can see why people would pick Savage but I believe that Styles has had the better in ring work and worked for so many promotions and faced so many great wrestlers in great matches.

Jason Greenhouse: Randy Savage, but not by much. AJ is a better in-ring worker, but Savage brings his legendary promos and intense feuds to the table.

Matt Souza: I’d go with Savage. Both Savage and Styles have had some incredible matches but the thing that ultimately made me pick Savage is his promo skill. His promos are wildly entertaining.

Logan Crosland: I’ll go AJ just based on the fact that he’s one of my all time favorites!

Matthew Drysdale: Savage, because I grew up with his career.

Adam Wirth: Macho Man because of the era he wrestled in. But both are great

Lawrence Miles: Savage, but I feel like this is an old school/new school debate. I grew up watching Macho, which definitely influences my decision, more so than AJ. If I was younger, it would probably be AJ. I’d love to see this question with other wrestlers (Flair/Funk, Misawa/Tanahashi, Bockwinkel/Bryan).

Mister Ooh-La-La: Randy Savage is my all time favorite pro wrestler, so this is an easy one.

Dennis Nunez: Savage. AJ is a great in ring performance maker and his promos are good as well. But Savage is more of a total package and is draped in charisma.

Kevin E. Pittack: Definitely Savage. AJ has great workrate, but so did Savage, plus Macho had better intangibles and, I believe, told a better story in the ring.

Michael Ingo Gutenberger: AJ Styles. He’s more of my era and let’s not forget he isn’t done yet.

Greg Phillips: There’s no wrong answer here. AJ has had more truly great matches at this point, and none of the lowpoints like 99 Macho and TNA Macho, but when you take into account the total package of promos, intangibles, etc., I have to go with Macho. Plus a lot of the ICW and Memphis stuff would be new to me.

David Mann: Savage. I love Styles but Macho is the reason I became a fan.

Brian Meyer: Randy Savage because he’s my 2nd favorite wrestler ever. Thank you PTBN for nailing my top 3 favorites in 3 days!

@toddweberguitar: Of the two listed, I’d actually choose Styles. The matches are more consistently great, while Mach’s are all over the place.

@wilkysox: I would have to say Savage. There would be A LOT of fun promos there, and he would have some superb matches as well. 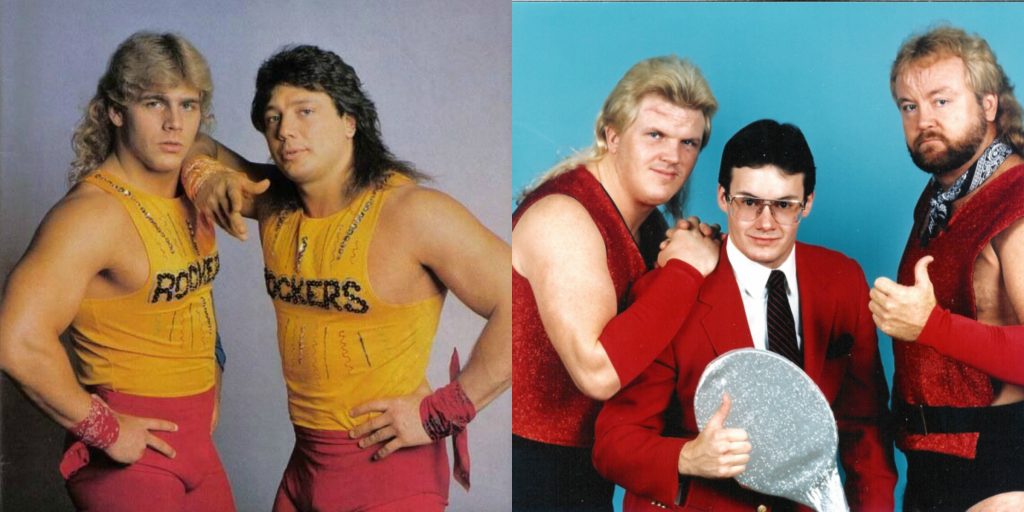 Greg Phillips: ROCKERS. I will probably be on an island here, but this is an easy choice for me as they’re my favorite tag team.

Kevin E. Pittack: I’m too young to appreciate the Midnights. It’s the Rockers by default.

Todd Weber: Eaton/Lane Midnights. Far more balanced of a team who could have watchable matches with anyone from the Mulkeys to the Road Warriors.

Jason Sherman:  The Rockers, hands down. My favorite tag team of all time. The match with the Orient Express is in my top 5. First match I put on when the network first came out. No contest for me.

Michael Schoen: The original Midnight Express of Eaton and Condrey. I have to cite PTBN’s own Good Ole’ Will when he said on a Dangerous Alliance podcast episode that the Midnights are the prototype of what a perfect tag team would be. I have to agree.

Justin Pratt: Damn, this one hurts. Could go both ways easily but right now I’d go MX. Eaton and Condrey. Both teams were awesome in the ring and the Rockers were great but Cornette puts the MX package over the top.

Chad Campbell: The Rockers are the best WWF tag team of all time. The winner here is Midnight Express

Ben Morse: Midnights. Love the Rockers but the body of work plus Cornette isn’t even close.

Andy Halleen: Rockers, by a hair, because of the WM 7 match.

Mark Boomer: Midnight Express, but only barely. I think they had more longevity than Shawn and Marty.

Greg Dufour: The Midnight Express. They were so freaking good.

Brian Meyer: Could definitely go either way but I love the Midnights.

@wilkysox: Midnight Express for sure.