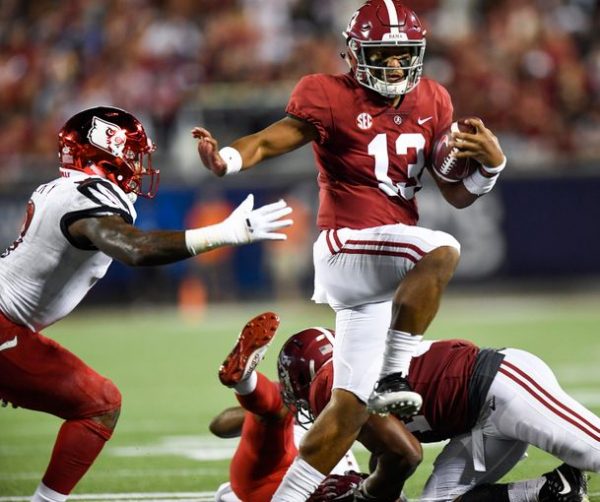 Welcome back college football fans to the first installment of the REBIRTH, of PTBN On Campus! In 2016 we went week by week during the college football season with weekly recaps and predictions. After a year hiatus, Logan Crosland and Scott Criscuolo return to give their thoughts on the 2018 college football season. We will give our thoughts on some of the highlights from every week and look ahead to the upcoming week. The guys won’t bother with rankings until early-October when the first Playoff Ranking comes out.

So, after “Week Zero” last week we had the first ACTUAL Week 1 of the season, so let’s dive right in on the guys thoughts!

1) The Irish escape: After a dominating first half on both sides of the ball, Notre Dame survived some tough Michigan defense for a 24-17 win over the Wolverines. Brandon Wimbush threw for 170 yards and a TD while the offense continued to convert third down after third down to keep Michigan’s offense off the field in the first half. The debut of Michigan’s Shea Patterson was underwhelming, throwing for 230 yards and no TDs. The Irish defense made things hold with Patterson’s fumble with 1:48 left, and Jim Harbaugh is 1-6 in his career against ND, Ohio State & Michigan State. That’s not good. Their home opener is this week against Western Michigan, while the Irish go for 2-0 with a home tilt against Ball State.

2) Did Appalachian State do it AGAIN???: Not this time, but damn close. Not to kick more dirt in Michigan’s face but remember that huge upset in 2007? Yeah well Saturday it almost happened again except this time it was in Happy Valley. Penn State has National Championship dreams, but having to go to OVERTIME to beat App State 45-38 does not instill confidence in the Nittany Lions. Sure, Trace McSorley started his Heisman chase with 230 yards and a TD through the air and Penn State had 5 rushing touchdowns but the defense was woefully bad as they couldn’t stop the Mountaineers in the 4th quarter before finally getting it done in overtime. Having lost their three top playmakers and vaunted offensive coordinator Joe Moorhead, who took over as Mississippi State’s head coach, the Nittany Lions’ offense looks like a work in progress. They play in-state rival Pitt next week.

3) Geaux Tigers: A great start for the LSU Tigers who are now 4-0 at “Jerry’s House”, AT&T Stadium in Arlington, after a 33-17 win over Miami. The Hurricanes tried to kick it old school by starting a shoving match with the LSU team 75 minutes before kickoff. The difference between this and the Jimmy Johnson/Dennis Erickson years is that… well Miami wouldn’t start a fight, and then TRAIL 27-3 AT THE HALF! Nick Brossette rushed for 125 yards and two touchdowns while Canes QB Malik Rosier completed less than 50 percent of his passes and had two interceptions. Miami will try to rebound next week at home against Savannah State, while LSU opens their home schedule against Southeastern Louisiana.

4) Service Academies, Week 1: As I did two years ago I will track how Army, Navy & Air Force will do every week. For the first time in quite a while, the Black Knights of the Hudson hold the Commander In Chief trophy. Can they keep it? Well Navy is off to an 0-1 start after losing a 59-41 track meet to Hawai’i. Cole McDonald threw for 428 yards and six touchdowns for the Rainbow Warriors. It may not get better for the Middies’ defense this season. Army is also 0-1 after dropping a 34-14 decision to Duke down on Tobacco Road. Army fumbled five times and lost two of them and the running game couldn’t get going. Air Force did win, but it was a 38-0 throwaway game to Stony Brook. Week 2 has Air Force at Florida Atlantic, Navy’s home opener against Memphis and Army’s home opener against Liberty.

5) My Alma Mater: As for the school I attended, Division II University of New Haven opened their schedule with a tough 41-31 loss to D-I Bryant. Picked to finish 4th in the Northeast-10, the Chargers will be on the road this Saturday against Pace.

1) Tua or Hurts?: This was the biggest question coming into opening weekend… who would start for defending national champion Alabama? Ultimately they went with Tua. He is the more talented of the two QBs, but with Hurts having the experience advantage you couldn’t have gone wrong either way. They have announced that Tua will start week 2, despite Nick Saban’s shooting down of any QB questions in his postgame interview.

2) Joe Moorhead Era Begins in Starkville: With a new season beginning it means one thing, new faces on the sidelines in the head coaching ranks. One such coach is Joe Moorhead, head coach of the Mississippi State Bulldogs. Fans in Starkville were excited to see what this great offensive mind could bring to a team who was already toward the top of the conference in most offensive categories. Nick Fitzgerald had to sit out the first due to suspension, but he will get his first playing time of the new season in a true road game at Kansas. His backup, Keytaon Thompson, only tied school record for total touchdowns in a game with 7, as the Bulldogs rolled to a 63-6 victory over Stephen F. Austin.

3) Auburn Pulls One Out Late: Maybe the biggest matchup of the weekend with playoff implications featured the Auburn Tigers and the Washington Huskies. Both come into the season with highly touted and experienced QBs, Jake Browning and Jarrett Stidham. The two QBs did what they could to put their teams in a position to win the game, but the story here was the play of the two defenses. Both played very well and made two very good QBs struggle. Auburn ultimately pulled this game out, scoring with just 6:15 left in the game, and the defense held it down from there.

4) Maryland 2, Texas 0: When you think of football powerhouses, Texas is probably one of the names that would come up in most circles. Maryland on the other hand, would not fit into that conversation. Amid all of the scandal Maryland has faced this offseason with the death of a player and the suspension of their head coach, you would imagine the team would be very distracted and overflowing with emotion. Despite all of the turmoil though, this Maryland team did exactly what they did last year and shocked Texas. This game wasn’t quite as decisive as last year but Maryland was definitely the better team Saturday, jumping out to an early lead and then scoring the last 10 points in the fourth quarter to pull out the win.

5) ACC Struggles on Opening Weekend: Louisville, Miami, and Florida State all had chance to make a statement against stiff competition and put the ACC as one of the top conferences in the country. Louisville and Miami faced stiff competition in two SEC West powerhouses in Alabama and LSU, while Florida State faced fellow conference foe in Virginia Tech. Louisville got overpowered by Alabama, Miami got blown out by LSU, and FSU couldn’t get anything going on offense against Virginia Tech. While Virginia Tech is in the ACC, when bright lights were on the ACC struggled as a whole.

A look at the big games this coming weekend: