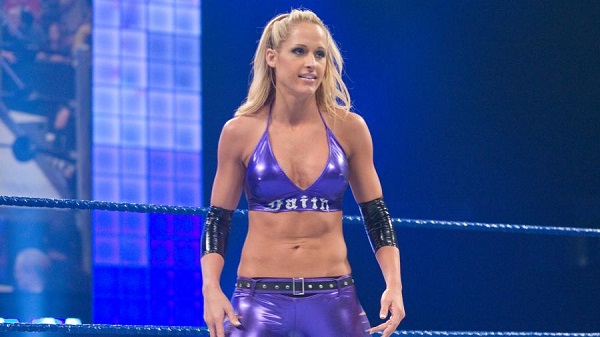 I know, Michelle McCool is a bit of a hard sell. She was one of those wrestlers who had that uncanny ability to raise the ire of the average internet wrestling fan, for any number of reasons: tick all that apply. Was it because she was overpushed? Because she married Undertaker? Because she had negative charisma? Because she stole the Styles Clash? Who knows. Frankly I think you’re all crazy, but then I suppose, being that I am the one big Michelle McCool fan that probably makes me the crazy one.

I absolutely do believe that she gets a bad rap and that she deserves real consideration, especially from people who profess to enjoying good wrestling and the workrate-y side of life more than promos or characters or whatever else. Michelle is, essentially, a workrate candidate, maybe the most unlikely workrate candidate on the list, but there you go.

Let me tell you about the work. In the first place, she was stiff as hell. At her best one of the most hard hitting female wrestlers to ever grace WWE. She would absolutely NAIL folk with her offense, like the knee drops, a tight belly-to-belly, a stiff Big Boot or that brutal running knee. That thing in particular was sick, especially when she hit it against the table or the barricade on the floor. Her flimsy one-legged dropkick was the one glaringly weak piece of offense she had, used mainly when she was a face, and sadly that’s often one that people remember. But honestly Michelle was solid as hell in the ring; as a babyface she was pretty damn athletic, and as a heel she added layers of nastiness and violence on top of that.

Not only was she snug with her signature offense, but also when she was working over a body part. Michelle went for limbwork more often then the average woman of the day, especially on PPV or Superstars where she’d get a bit more time than usual. And if she was working the leg, she would WORK the damn leg; not just sit in holds but absolutely grind them, not just throw stomps but absolutely pulverise opponents with kicks and knees, all working towards her heel hook finisher. She was relentless on top and made babyfaces earn everything they got off her.

The other thing about Michelle’s offense is that she was willing and eager to try things. Take for instance her and Melina going out at Night of Champions and deciding to try to steal the show with a balls-out spotfest that included a DDT on the barricade. Or that she was clearly watching TNA and took AJ’s Styles Clash and Daniels’ Angels Wings as big moves (she also used Bryan’s indy “I’ve got ’til five!” heel bit a lot – she was basically one of us!). Or her attempt to get an extremely non-flashy, MMA-heavy move like the heel hook over as a credible finish in WWE. She’s someone who looked outside the company, and outside the box for unique elements to bring to her matches.

The Laycool team with Layla was a definite highlight of her run. I think they made a great heel team, able to dominate as a unit and then beg and stooge in turn, as well as being completely annoying and unlikeable in every way. Michelle sort of worked as the heavy of the duo, doing more of the wrestling and dishing out most of the beatings, while Layla carried the character work and was more of a comedic stooge of a heel. They had a bunch of good matches and carried the women’s division for a solid 18 months.

Michelle’s biggest problem was her disquieting lack of real charisma. No matter her character she always came off pretty wooden, with her unfortunate promo voice and that weird negative charisma some people suffer from, that rendered her hard to connect with even when she was doing what was “objectively” (urgh) good work. She was like a blonde, leggy robot, at times. But she was MY robot! I latched onto her as far back as the Diva Search for whatever reason, so I was always paying extra close attention to her as one of my people, but I get that if you’re not me, Michelle can be a little hard to love.

Character-wise, as I say she was a perfectly fine but uninteresting babyface, so her best stuff is as a heel, particularly the Laycool run. Your mileage may vary on that stuff but they went all in on it (skits, in-ring promos, having t-shirts made to mock the faces, the works) and did succeed in coming off as completely irritating shitheads. No cool heel nWo shit going on there. As a highlight, there was that one big promo segment on Smackdown with them, Maria and Mickie at the height of the Piggie James angle that got over huge and had Michael Hayes telling them in the back that they stole the show.

Really their biggest flaw (sorry) was that babyfaces never seemed to get enough back on them in the end after all the teasing, but that’s more a booking problem than a performance one. There were sporadic moments of comeuppance, like Mickie finally squashing them at the Rumble, or Beth and Nattie putting them through tables at TLC, and at those times Laycool did bump and beg and stooge like gangbusters to sell it. Michelle had a great “Oh no…” look of fear whenever she was about to get got.

I’ve been talking a lot about the last few years of her career but Michelle had a deceptively long run. She started appearing in segments on Smackdown as soon as the Diva Search ended in 2004, and began wrestling the year after. When I went through 2005 recently I was already noting how competent she looked by her second televised match. “Amazing how un-bad this was,” is a direct quote. She was tall and athletic and picked up bumping and moving around the ring really quickly, and by the time her megapush began in 2008 with the advent of the Divas Title she was certainly backing it up in the ring, if nothing else. I mean, the kind of chain wrestling she was putting together with, like, Maryse you would not believe. Wrestling itself always came naturally to Michelle – it was the out of the ring stuff that she took longer to nail down.

Nor did she have a lot of opportunity to nail it down either, since she did little apart from the odd bikini contest or match for the first few years. The love triangle with Jamie Noble and Chuck Palumbo was the one and only significant storyline she had in those days. She did have a cup of coffee as a heel in 2006 as the schoolteacher manager of Idol Stevens and K.C. James, the former being the future Damien Sandow and the latter being the future Who The Hell Is K.C. James. But apart from that she was always a babyface, pure as the driven snow until her heel turn in late 2008.

That heel turn, by the way, is below (starting at 7:30) and the way she beats Maria down for like a thousand years is veritably Hunteresqe. You know, now that I think about it, the comparisons to Triple H abound: dominant heel champ, pushed way beyond her overness level, hated on the internet, married into the biz, luxurious facial hair…it’s uncanny. OK, now I admit, I’m being ridiculous and in no way am I actually equating Michelle McCool with Triple H.

Really my main point is that I think there’s a two year period, roughly from the start of 2009 to her retirement at Extreme Rules 2011 where Michelle was the best female match worker in the company. You may think of that period as a nadir for women in WWE but I think there were definitely worse times for the division, and more to the point, whenever good work was being done Michelle was usually involved. Laycool had a bunch of fun little matches (Time! Alas, always the problem of time!) and whenever she got any length of time – on C shows or for PPV matches with Melina, Beth, Nattie, Layla, Maryse, etc. – she generally delivered and had the best matches of the period.

In the wake of Trish being Trish WWE brought a lot of women in and trained them on the fly just like her. Of all the other women who we saw learn to wrestle on television, I think Michelle McCool improved the most and came the closest to emulating the achievement of Trish in going from 0 to 60mph as a wrestler in 90 second matches. And really, calling someone a poor man’s Trish, what higher form of praise could I possibly give?

If you only watch one match, make it…
Michelle McCool vs Melina – Women’s Title (Night of Champions 2009)