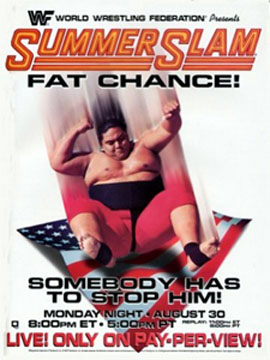 Welcome to the first installment of Place to Be Nation’s “Calendar Correlation,” where I will review a past event pertaining either to timeframe or an aspect related to the current professional wrestling product.

Pro wrestling has been a huge part of my life since the age of seven and I have a considerably extensive background covering the industry by contributing to several top wrestling media sources over the years. I have been a big fan of the PTBN family of podcasts for quite some time and it is a privilege to be associated with such a knowledgeable group of people who are just as passionate about the business as I am.

Seeing as July 4 weekend is upon us at the time of this writing, I found it proper to take a look back at the Americana-themed SummerSlam ‘93 pay-per-view, which emanated from The Palace of Auburn Hills in Auburn Hills, Michigan on August 30.

The event was centered around Lex Luger challenging WWF World Champion Yokozuna, who had won the belt from Hulk Hogan two months prior at King of the Ring. The 500-plus pound Samoan, along with his manager, Mr. Fuji, had orchestrated a July 4 bodyslam challenge on the deck of the U.S.S. Intrepid in an effort to humiliate America on the nation’s birthday. After several failed attempts by wrestlers and other professional athletes to slam Yokozuna inside a WWF ring assembled on the aircraft carrier, Luger arrived via helicopter and succeeded in bodyslamming the titleholder. The act signified the former “Narcissist’s” babyface turn and would lead to him challenging Yokozuna in the main event of (arguably) the WWF’s second most prominent card of the year. The company promoted their big title showdown throughout the summer by sending Luger on a cross-country public appearance excursion while travelling in a tour bus dubbed the “Lex Express,” where the new red, white and blue-clad hero greeted fans and encouraged them to support his petition for a SummerSlam championship match against Yokozuna.

SummerSlam ‘93 featured 11 matches in total, including one dark bout (Owen Hart going over Barry Horowitz), three title contests and a match to determine the “King” of the WWF.

The show opens with a video package detailing Lex Luger’s “Call to Action” campaign aboard the Lex Express. We are then welcomed to the arena by announcers Vince McMahon and Bobby “The Brain” Heenan.

The seeds for this bout were planted when DiBiase, along with his Money, Inc. partner Irwin R. Shyster, ridiculed Ramon for his inability to defeat the 1-2-3 Kid, who had upset “The Bad Guy” on a May episode of Monday Night Raw. A decent contest, won by Ramon with the “Razor’s Edge” to start his babyface run off strong. This match is most notable for being DiBiase’s final in-ring appearance for the WWF before a neck injury forced him into retirement a few months later. He would return to the promotion as a guest color commentator at January’s Royal Rumble.

Todd Pettengill interviews the family of Rick and Scott Steiner in the crowd. The most newsworthy item here is sister Crystal referring to Rick by his birth name, “Rob.” The awkward conversation is thankfully interrupted by Jim Cornette’s introduction of his tag team, The Heavenly Bodies.

The Bodies were a top tandem for Cornette’s Smoky Mountain Wrestling promotion. I remember what a huge deal it was at the time for the WWF to even acknowledge another wrestling company, much less have two of its stars competing on one of their pay-per-views. While the Stan Lane version of the Heavenly Bodies had represented SMW along with Cornette and the Rock ’n’ Roll Express at SuperBrawl earlier in 1993, WCW had long established its willingness to cooperate with other leagues; this was entirely new and novel ground for Vince and company. The hometown hero Steiner brothers win an action-packed bout following a “Frankensteiner” by Scott.

Backstage, Joe Fowler interviews Intercontinental Champion Shawn Michaels and his bodyguard, Diesel, who claims he is only at Michaels’ side to keep the women away from him.

This should have been an instant classic … a frontrunner for Pro Wrestling Illustrated’s Match of the Year … an in-ring masterpiece discussed for years by wrestling fans and insiders alike … one of the all-time great I-C title bouts, capped off with Perfect regaining the championship he was synonymous with a few years earlier. Instead, we were given a solid enough encounter with a lame finish that was at least five minutes too short. Perfect reverses a backslide attempt into a Perfect Plex (which would have been a tremendous finish), but is pulled to the outside by Diesel. A scuffle with the bodyguard causes Perfect to be counted out and the challenger is later laid out by the future Dudes With Attitudes after attacking the pair post-match. Pettengill confronts Michaels in the aisle about the way he retained his title, but an undeterred Heartbreak Kid claims to be the greatest Intercontinental Champion in history.

Joe Fowler interviews the 1-2-3 Kid, who addresses his upcoming match with Irwin R. Shyster. Kid cuts a generic underdog babyface promo, vowing to give one-hundred and ten percent against his larger opponent. Certainly not the Sean Waltman verbiage of later years.

Although modern fans may not realize it, the 1-2-3 Kid was considered one of North America’s premier aerial artists in 1993, performing moves considered rare and innovative at the time if you did not follow wrestling outside the WWF. I.R.S. goes over here and it was surprising to see Kid relegated to Jobber to the Stars status so soon after being started off strong in the underdog role with wins against Razor Ramon and Ted DiBiase, especially considering that there appeared to be no major plans for Shyster moving forward.

Todd Pettengill interviews Bruce and Owen Hart, who are seated in the front row. The brothers explain that their father, Stu, is not present due to having knee surgery, which they blame on Jerry Lawler’s confrontation with the Hart family patriarch on Monday Night Raw.

Jerry Lawler came through the entrance curtain on crutches and told Todd Pettengill he was unable to compete in his scheduled match against Hart due to a leg injury suffered in a car accident earlier in the day. Instead, Lawler selected his personal “court jester,” Doink, to wrestle in his place, but the Memphis monarch’s plan would backfire when he leapt into the ring and nailed Bret with one of the crutches as the “Hitman” applied the “Sharpshooter” on Doink. This prompted WWF President Jack Tunney to appear and order Lawler to wrestle Hart or face a permanent ban from the Federation.

Match #6: Jerry Lawler vs. Bret Hart (for the “Kingship” of the WWF)

A good match featuring some fun brawling and entertaining heel work by Lawler. Hart eventually secures the submission victory with the “Sharpshooter,” but refuses to release the hold despite a plethora of officials coming to Lawler’s aid. This causes the referee to reverse his decision and Lawler is announced as the new “King” of the WWF. This was a confusing outcome, although I admittedly can’t recall any matches for the crown ending in a DQ during the late-80s and early-90s, so I suppose it could be justified that the title would change hands via those means.

Jannetty receives little offense and Borga eventually wins with a “Torture Rack”-type backbreaker. Essentially a nothing match designed to get over the newcomer Borga, so I suppose it served its purpose.

Match #8: Giant Gonzalez vs. The Undertaker (Rest in Peace Match)

Gonzalez and manager Harvey Wippleman arrived in possession of ‘Taker’s urn, which was stolen during a television beatdown of the Dead Man and his second Paul Bearer several months earlier (which also involved Mr. Hughes, who had since departed the WWF). The rules of a Rest in Peace Match – no disqualification, no count-out and there must be a decisive victor – were kept secret until SummerSlam and I imagine ended up being a disappointment to many viewers. Bearer returned during the bout (absent since the aforementioned attack by Gonzalez, Wippleman and Hughes) and clotheslined Wippleman at ringside, allowing him to reclaim the urn. ‘Taker acquired the three-count following a top-rope clothesline (because there was no way in Hell he was getting Gonzalez up for a Tombstone) and an angry Gonzalez chokeslammed Wippleman after realizing he had lost the urn. This was Gonzalez’ final pay-per-view appearance for the WWF before disappearing from the company in late-1993.

Joe Fowler interviews WWF Champion Yokozuna, along with his manager Mr. Fuji and American spokesperson Jim Cornette. Cornette blames the Heavenly Bodies’ loss to the Steiners earlier in the night on a biased referee and vows that Lex Luger will fall short in his challenge of Yokozuna in the main event.

Match #9: The Smoking Gunns and Tatanka vs. Bam Bam Bigelow and The Headshrinkers

The central point of this match was the feud between Bigelow and Tatanka, which had been heated up with an attack on television where the skull-tattooed New Jersey native cut the red hair symbolizing his foe’s Lumbee heritage. Tatanka rolls up Samu to score the win for the his team in a fun six-man tag.

Joe Fowler interviews Lex Express driver Hank Carter inside the bus. Carter speaks about Lex Luger visiting the children’s hospital in Philadelphia and predicts that his boss will win the WWF Title tonight.

Back inside the arena, Todd Pettengill speaks to a fan dressed in a red, white and blue toga.

At the announce desk, Vince McMahon and Bobby Heenan discuss the nationwide support Lex Luger has received in his quest to win the WWF Championship and Heenan wonders how Luger got former U.S. President Jimmy Carter to drive his tour bus – this is the Bobby I love!

We go to the ring, where Kiotika Suzuki sings the Japanese national anthem. Howard Finkel then introduces musician Aaron Neville, who is accompanied by the “Master of Ceremonies” for the main event, Randy Savage. Neville performs “The Star-Spangled Banner.”

Two caveats were placed on this match by Yokozuna representative Jim Cornette: First, Luger was required to wear protective padding over the “metal plate” surgically implanted in his forearm. This would also be Luger’s only opportunity at the WWF Title while Yokozuna was champion.

This match was fine for what it was, but the finish was absolutely the wrong decision, both in hindsight and with summer of ’93 foresight. With the referee distracted, Luger removes the protective padding from his forearm and knocks out Yokozuna, sending the Champion to the outside where he is counted out. The Steiners, Tatanka and Randy Savage enter the ring to celebrate Luger’s victory, although Yokozuna obviously retains the title on a count-out.

This event would mark the peak of Luger’s WWF career. Clearly, the plan was to build anticipation for a rematch with Yokozuna at WrestleMania X, where Luger would finally capture the gold. However, without any compelling angles or feuds to keep him occupied until March, Luger would cool off by ‘Mania season and essentially force the company to hitch their wagon to Bret Hart instead. Placing the WWF hype machine so strongly behind Luger during the summer only to have him come up short for the title was a huge mistake that undoubtedly impeded Lex’s WWF run. The outcome also deflated the live audience, some of whom half-heartedly waved their miniature American flags while others stood silent, likely wondering what the hell Luger and four of the company’s other top babyfaces were so happy about.

The show concludes with a music video documenting the Lex Luger-Yokozuna feud.

Overall, I enjoyed this show quite a bit and feel it may actually be one of the more underappreciated WWF events of the early to mid-90s. The card offered a lot of solid to great in-ring action along with a few notable moments.

Thanks for checking out my debut column. Please feel free to send me an E-mail at AdamW@placetobenation.com or find me on Twitter under the handle @AdamWilcox_1980.