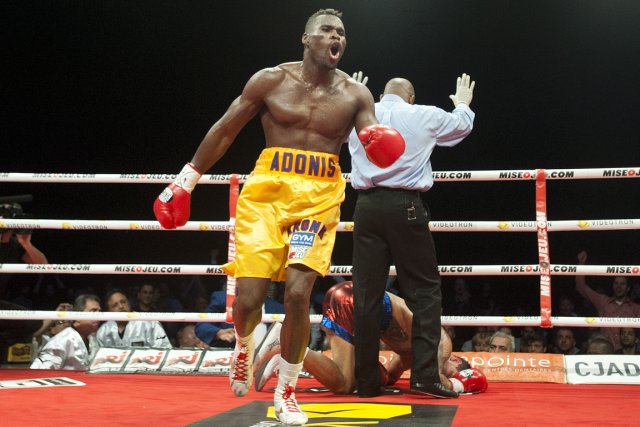 This Saturday night World Championship Boxing returns to HBO with a doubleheader. In the co-feature, Julio Cesar Chavez Jr. makes his long awaited return from a year-long layoff to face Brian Vera in a 10-rounder at a weight to be determined (more on this later). In the main event, Adonis Stevenson makes the first defense of his newly minted WBC Light Heavyweight title against former IBF belt holder Tavoris Cloud. This should be an exciting night of pugilistic pain with plenty of interesting subplots. As can be expected for all the big fights, the Cowboy has the breakdown for you.

The last time we saw Chavez was in his thrilling, yet ultimately unsuccessful, challenge to Sergio Martinez for the lineal Middleweight championship back on September 15th of last year. Martinez toyed with Chavez for the first eleven rounds of the contest and was seemingly cruising to an easy decision victory. Then the 12th round happened. Chavez finally caught the speedy Argentinian and peppered him with big shots, knocking him down and very nearly out. While he lost the official decision, he seemed to have proved his naysayers wrong by taking the great Martinez to the brink. A bit of the luster was taken off of his performance when he tested positive for marijuana after the fight. He was handed a suspension and a significant fine from the Nevada State Athletic Commission. Saturday’s bout with Vera marks his return to the ring.

Unfortunately for everyone involved, Chavez has displayed an almost unfathomable lack of professionalism in the lead up to this fight. The bout was originally contracted to take place at 163 pounds. This was eventually changed to 168 pounds to accommodate Chavez. A couple of days ago, word began to leak out of Chavez’s camp that he would not be able to make the new, higher weight. It appears now as if the fight will take place at a limit of 173 pounds and that Chavez will have to forfeit a percentage of his purse to Vera. What was already considered a lopsided fight in terms of pedigree has now become a farce. Vera, a natural middleweight, is in the unenviable position of either stepping into the ring with a man who may outweigh him by as much as 25 pounds on fight night or give up a career high payday. The show will almost certainly go on, but Chavez should be ashamed of himself. His training habits and dedication have always been questioned and this current stunt will do nothing to help him in the court of public opinion.

As for the fight itself, it seems pretty clear how this is most likely to play out. Vera is a tough as nails, straight ahead brawler. He counts on using a high work rate and solid punching power to wear down his opponents. If he was fighting someone his own size, this strategy may work for him. Against the iron chinned and much bigger Chavez, I don’t see Vera having much success. Chavez will use his vicious body attack and superior boxing skill to wear Vera down and, eventually, stop him. Chavez’s total disregard for the weight limit has turned what may have been an interesting fight into a one-sided beating. I hope I’m wrong and Vera is able to deliver the upset but I’m not seeing it here.

This one has slugfest written all over it! The last time we saw Stevenson he was dispatching of lineal Light Heavyweight Champion with an absolutely brutal first round KO. While Dawson was coming off a knockout loss to pound for pound ace Andre Ward, he was a prohibitive favorite in the fight against Stevenson. Pundits were not convinced that the heavy handed Canadian could deal with Dawson’s smooth boxing skills. Stevenson did all that and more as he put Chad’s lights out with a vicious right hand. A star was born. In Cloud, Stevenson has a fighter in front of him that he won’t have to chase. “Thunder” is a big puncher in his own right and a volume punching machine when he is at his best. In his most recent contest, he lost a clear unanimous decision to the ageless Bernard Hopkins. Cloud is certainly not the first guy B-Hop has made look bad and I expect him to come out strong and determined.

For however long this fight lasts, these two will be throwing bombs. While Cloud is an excellent offensive fighter, he is there to be hit. This could be his undoing against Stevenson. Stevenson has just enough boxing skill to thwart Cloud’s attack and when he throws back he has absolute dynamite in his fists. If Cloud can survive the first half of the fight he has a chance to wear Adonis down in the later rounds with his high volume style. I don’t think it’s going that far. I believe Stevenson is one of the great power punchers of this era, very much in the Julian Jackson mold. I think he catches Cloud early and spectacularly and announces himself, along with Gennady Golovkin, as a must see TV fighter in HBO’s stable.

Well fight fans, that’s how the Cowboy sees these matches going down. It is boxing though and, as we all know, anything can happen. I’m looking forward to recapping the action for you on Monday. See you then!