Receiving the 1st pick in a Snake style draft is a blessing and a curse. After the top pick the next one rolls around after 30 5 Star matches are scooped up so trying to craft a card with the top work rate is a lost cause. I attempted to formulate the most unique card with little repeat performers and titles. With the last pick in the entire draft,  I was also resigned to being stuck with the worst match and I knew what it would be right away and the less said about it the better. So here it is: 8 titles on the line and other priceless WrestleMania moments.

In regards to Savage vs Steamboat, this will always be my favorite match of all time and there was no way I was going to pass on it. 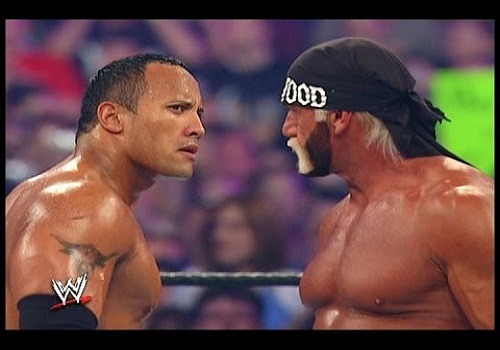 Why? Why on Earth would someone use the 2nd overall pick on THIS match? If I was basing my card on workrate or ‘perfect’ matches, I would of course have picked Taker/HBK from WM25. Mania X-8’s Hogan/Rock was still the best time I’ve ever had watching a match with friends, and that’s what wrestling really means to me. I will forever remember the stupid victory dance that my friend Kasey’s dad did after the finish, and though Jeff Freese is gone now, that memory endures. Also, this is a very historically important match and the crowd reactions are on an all-time great level. 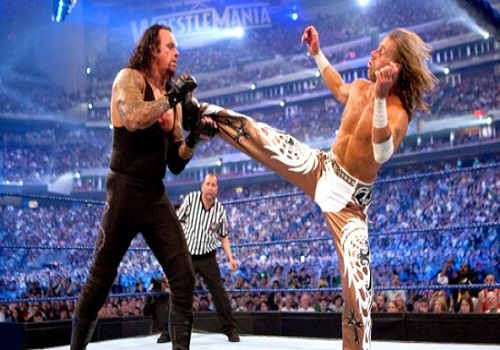 My one condition for this project was to draft the best possible Wrestlemania card without including any championship matches. Wrestlemania: Non-Title, if you will.

My top two picks are a one-two punch of the best things about WWE and WrestleMania: the big stars colliding in big match ups, and the best wrestlers on earth being given a stage to create proper magic. Two icons of the company have one of the best matches of all time and set up years worth of stories going forward. What else can I say about it? 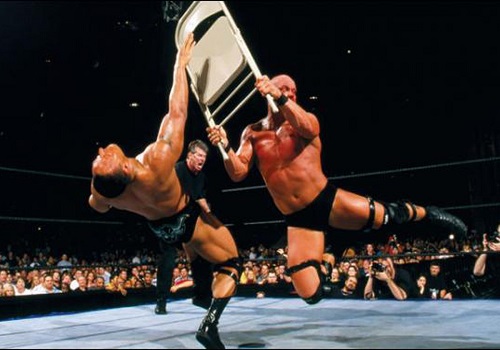 I want the biggest, best match available, and this checks both boxes. In my opinion, it’s the greatest main event in WrestleMania history and the greatest world title bout in the event’s history, plus it features the two biggest stars of the company’s biggest era at the peak of their cultural power.

This was a pretty easy selection here, as many consider it to be the best match in WrestleMania history. When it was still available at number 5, and with my personal favorite of Shawn Michaels vs The Undertaker from WM25 off the board, I jumped at the chance to take this one with my first pick. 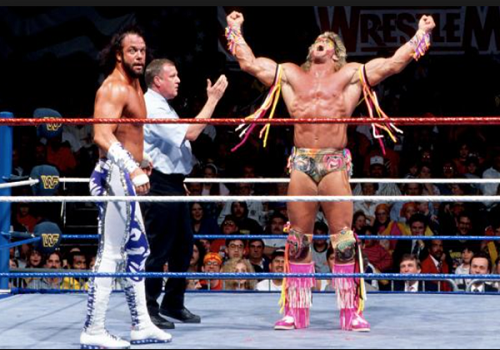 Being introduced to this “Every Wrestlemania Match Ever Draft” for PTBN alongside a menagerie of who’s-who’s of the current Nation family, I thought it would just be a fun project to take part in, an opportunity to meet some new people and a way to look back at some matches I hadn’t seen in YEARS, by getting re-invested into a company haphazardly, by choice, rather than one that has more often than not left in a state with hands thrown in the air, while cursing under my breath.

Being the nerd that I am and constantly seeking to make things more difficult for myself than than ever need to be, while the draft had little-to-no parameters other than “draft what you feel like with the idea that you will explain your picks later”, I naturally went the ol’ “Dangerous Alliance” podcast route, instituting NO repeat wrestlers and NO repeat titles, while still trying to make a compelling card. It was hard in a company that has people like Undertaker, Kane and Triple H on a billion WrestleMania shows, but when all was said and done, I managed to create my own 20-match, Big Egg Universe-esque mega WrestleMania, sequenced into one massive show of matches that I genuinely think are pretty good. It’s daunting length will make even WrestleMania 32 seem like an episode of NXT in comparison, but hell, this is fantasy booking. Here is that very card:

I would have picked this match with the first overall pick. Going into this project, it was the only match I NEEDED, because truthfully, of all the countless hours of wrestling I’ve watched in my life, it’s perhaps the only match I NEVER get tired of watching. It is the match I have seen the most in my life, features two of my favorite wrestlers of all time, has the best post-match segment of all time and is just pure, absurd pro wrestling through and through. This match, to me, is the most “WWF” match that has ever existed, perhaps only equaled by Hogan/Andre and while it didn’t even main event the show it comes from, I can’t imagine ever putting this match on a fantasy card that I create without putting it into the main event spot. The post-match is better than any major title win to close out a Mania, it’s just perfect – and even if a lot of my love for this match is what happens after the pinfall, I don’t care – it just feels pure and good and awesome. Send the crowd home happy, y’all. 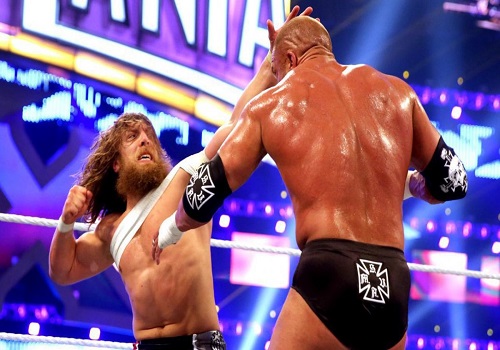 One of the two best openers in WrestleMania history and maybe the best WrestleMania match of the modern era. A lot of modern matches were getting picked early, and I wanted a premiere match to start off my list. With all the drama surrounding the match and with two amazing talents in the ring, it doesn’t get much better. 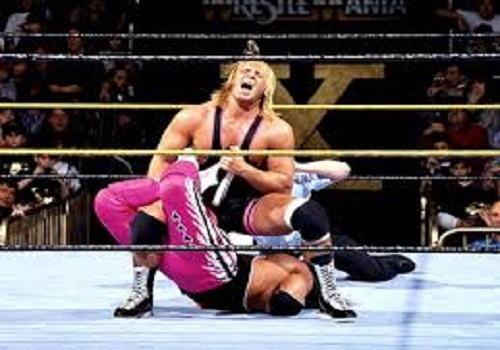 In full transparency, this would not be my first overall pick if I had gone first. But since my favorite Mania match went almost right away, I decided I should go with either the best match or most memorable match available for my first pick. This is both. An all time classic, regarded by many as the best opening match in history. Plus, Owen wins!

I’ll be honest: I picked 9th, but there’s a good chance I would have picked this one first overall had I been given the chance. Going into the draft I was looking for a few things:

So Flair/Savage is amazing. It’s crazy underrated in terms of match quality, but also packs all the emotional punch of the best Randy Savage feuds as well as the unadulterated heel scumbaggery of Ric Flair. The “SHE WAS MINE” storyline was killer and the match was a hate filled brawl with blood, an absurd amount of cheating, and Flair nearly getting pinned off a punch to the face.  On top of which you get Bobby losing his mind on commentary and some fantastic post match promos.  AND SAVAGE WINS THE DAMN TITLE! This match is a perfect beautiful brawl and I was thrilled to get it.

I went into this draft with two main goals: create a WrestleMania card that I would personally love watching and to do so without repeating wrestlers, titles, stips, etc. In other words, to create a legitimate card, albeit one that would last for roughly 14 hours (or, ½ the length of WrestleMania 32.) If I hit upon a lot of WrestleMania hallmarks (celebrities, Undertaker streak matches, WrestleMania moments TM) in the process, then bonus points.

So for my first pick I went with this classic Intercontinental title match, knowing that Savage/Steamboat was gone and with my goal of representing as many championships as possible, this seemed to be the best bet for an all time classic IC title bout. Plus, I felt pretty strongly that there were enough world title matches at Manias that a really good one would still be available in the next few picks. 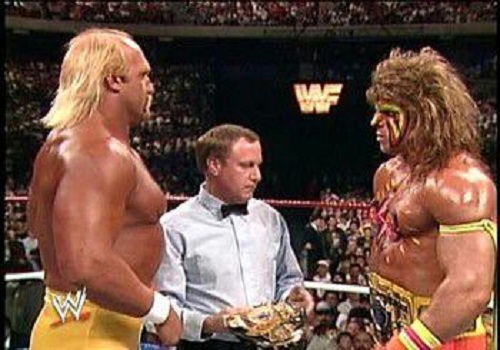 The first time (and really only time) that Hogan tried to “pass the torch” and it ended up being a much better match than anybody thought it should be. Warrior continues a stretch of great WrestleMania matches that started the year before against Rick Rude.

I think its important to end WrestleMania on a high note.  And watching Daniel Bryan capture the Championship to cap off his journey easily fits the bill. It also helps that the match itself was excellent as it will go down to one of the best feel-good moments in WrestleMania history.

With most of the heavy hitters off the board, I was happy to grab this at the #13 spot as it is a match I could see going #1 overall and no one really batting an eye at the selection. I have also matured in my wrestling fandom to now call this a “great” match that really optimized every objective it set out to accomplish. I don’t think WrestleMania is WrestleMania without this match. 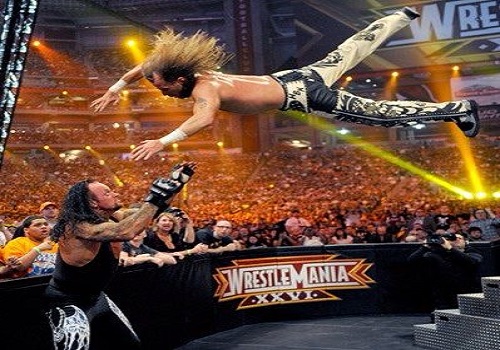 With my (everyone’s?) unrealistic draft strategy of taking alllllll the Shawn Michaels matches immediately scuttled, this was perfectly acceptable as a consolation prize. Truthfully, I go back and forth on whether this or their encounter one year prior are my favorite HBK match, so in a sense the decision was made easier by 25 being claimed so early. Still, I would’ve been demoralized to the point of sleepwalking through this exercise if I couldn’t get one or the other. Given my unfavorable placement in the draft order, that was a very real possibility. There’s no way I wasn’t going for this at the first available opportunity. 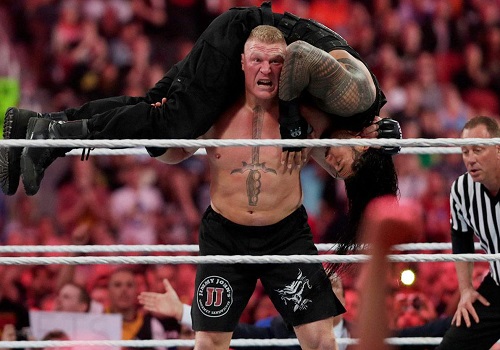 I thought this was great value toward the back end of round one, picking up one of the greatest WrestleMania main events of all time. It is an underappreciated, brutal classic with great heat and a memorable finish. 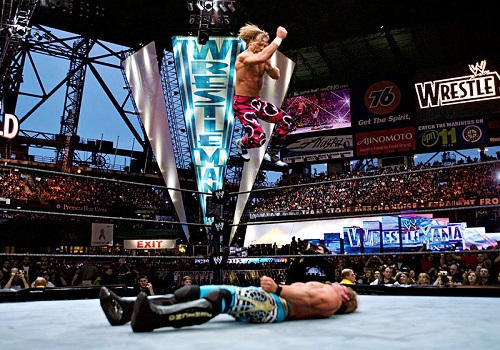 I want to preface my comments with a reminder that I am a complete novice here. That being said, I really enjoyed the draft and tried to take the project somewhat seriously, although not entirely. I am me, after all. Also, shout out to the website for its plethora of great content, it was super helpful.

I knew I wanted a Shawn match because he was always my favorite when I was fan in my teenage years. This one was listed on PTBN’s Top 25 WrestleMania Matches so I figured it was a pretty solid pick.