It’s that time of year again – the time when wrestling fans feel that something special in the air as we approach WrestleMania. Over the past 30 years, Mania has been home to some of the biggest and best matches and some of the most unforgettable moments in wrestling history. Every performer seeks to leave their mark on the grandest stage of them all. However, much like any other prestigious event, there are always debates over which performances stand the test of time and which matches have truly earned a place in history. With that in mind, we felt it might be appropriate this year, 30 years after WrestleMania first brought us the grandest sports entertainment spectacle of all, to take a look back and determine which matches truly are the greatest in WrestleMania history.

So, we assembled an all-star panel of Place To Be Nation writers and personalities to weigh in. Each participant submitted a list of their top 25 WrestleMania matches of all time. The list of 11 voters includes Nick Duke, Ben Morse, Justin Rozzero, Greg Phillips, Todd Weber, Andrew Riche, Chad Campbell, Jordan Duncan, Steven Graham, Glenn Butler and Wayne Maye. A points system was utilized, awarding each match 25 points for a first place vote, 24 points for a second place vote, and so on. Once the points were totaled, we came up with a composite list of Place to Be Nation’s top 25 Mania matches of all time.

For each match, we’ll list the event it occurred at, the number of points it received, how many ballots it was included on and which voter or voters ranked it the highest. 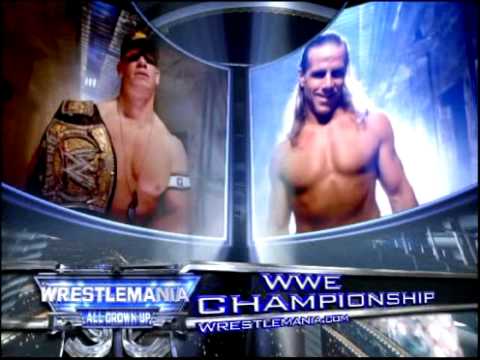 Chad Campbell: Cena was the golden child as 2007 began, but he took steps at becoming the “man” in his championship run up until his untimely injury in the fall. He molded good matches with lesser opponents (Great Khali) and all time classic matches against monster heel opposition (Umaga).  Right dab in the middle of these highlights is a two match series with Mr. Workrate himself, Shawn Michaels.  This seems to be a match that I like more than numerous big Michaels fans (I like the guy but not as much as most). I think it is fantastic and plays off the strengths of Cena while still gives Michaels a chance to shine on a big stage in a main event level contest. Cena is able to defeat Shawn in a 35 minute war that wouldn’t have felt out of place being the main event of an NWA card in 1978. This match features some tremendous wrestling on the grandest stage.

24.The Undertaker vs CM Punk — Wrestlemania 29

Greg Phillips: By far the highlight of WrestleMania 29, this was a match in which both competitors “worked angry.” The strikes are snug, the holds are tight and the drama is intense. The wrestlers do a great job of patiently building the match, sucking the crowd in along the way for one of Taker’s classic finishing sequences. Paul Heyman also stood out in this match with an all-time great managerial performance.

Andrew Riche: Rarely do you have a match so great that perhaps the most infamously botched ending in WrestleMania history still cannot dissuade you from the awesomeness you have just seen. That was the case at WrestleMania XIX in Seattle when Brock Lesnar and Kurt Angle, two highly decorated amateur wrestlers in a previous life, went at it on the biggest stage that sports entertainment can provide. Angle was the heel WWE Champion and a certified wrestling machine, a master of submission locks, while Lesnar was the babyface monster who had gotten screwed out of the title in November by his ex-manager Paul Heyman and desperately wanted it back. Lesnar and Angle were able to show off their amateur backgrounds by mixing it in with fantastic high spots and suplexes to seamlessly work a match that was so good that even Bret Hart, who hadn’t seen WWE programming in years at the time, enjoyed it. We all know now that the Shooting Star Press that Lesnar attempted to do (and failed with nearly fatal results) is the highlight of the match in WrestleMania lore, but it was covered up nicely by the veteran Angle as Lesnar pinned the Olympic hero for the WWE Title. It was also an unofficial end to the Smackdown Six era that really boosted the blue brand’s profile for most of 2002 and early 2003. It was all downhill from there for both guys, to be honest, but together, Lesnar and Angle shared one of their greatest moments as performers.

22(tie). The Undertaker vs Batista — Wrestlemania 23

Glenn Butler: The general scuttlebutt coming into the match was, let’s just say, Not Good. Aside from a couple of matches with Kurt Angle in 2006, it had been quite some time since Undertaker had generally acclaimed main-event-level matches, and Batista’s match quality had been variable at best since his return from injury in the summer of 2006. (Of course, no matter what you want to say about Batista, he always wore the belt.) So little was expected out of this match that it was slid into the middle of the card, and JBL even invoked the “monkey-butt ugly” disclaimer during Batista’s entrance. The two men took all of these doubts & low expectations and used them to deliver a fantastic match. It has everything you want out of a main-event between big men: hard strikes, fast-paced action, believable transitions, and big men executing moves you don’t often see big men execute. Batista came off the top turnbuckle, did a powerslam by running over one table and jumping through another, and then got Undertaker all the way up for his powerbomb. It didn’t start slow and amp up; it was great from beginning to end.

Greg Phillips: This has turned into one of the most divisive matches in WrestleMania history. I fall on the side of those who love this bout. It was just so different from anything most WWF fans had ever seen. These two guys, who worked a more athletically demanding style than most the iron men of the ‘70s and ‘80s, went out and competed with each other, laying stiff shots amidst some of the most intricate and beautiful high spots in WrestleMania history. Great structure and incredible trust between two guys who didn’t necessarily love each other.