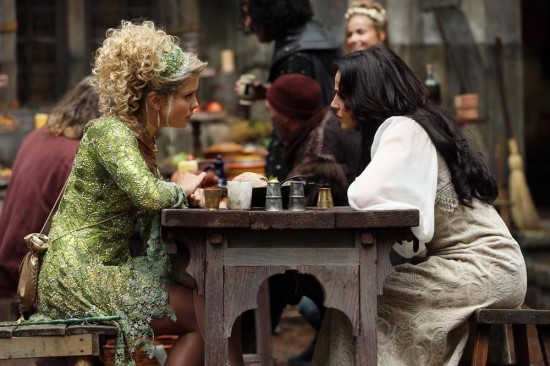 From the looks of things, we are going to be spending a lot of time in Neverland which is something I had assumed but I didn’t foresee the actual amount of time we would spend or that I’d be longing to know what exactly is happening IN Storybrooke. I also didn’t foresee how much MORE we would be learning about the central relationship in this whole darn yarn: the one between Regina the Evil Queen and Mary Margaret whose skin is as white as Snow. It is starting to feel like every tale to be told stems from the encounters these two have had, both good and bad, and that a lot of what has happened in every characters backstory has been affected by their strife- even apart from that whole curse thing that is the premise of the series.

This week we wandered the island of Neverland, but because the immortal boy-demon Peter Pan is able to move his camp AND follow our Gang of Five through the Dark Jungle, we find ourselves wandering in search of another familiar inhabitant of Neverland: Tinkerbell. The hope is that Tinkerbell can aid them in getting close to Pan whose advantage in Neverland is proving difficult to overcome without inside help.

Regina isn’t so convinced that Tink will be the ally that they need.  It would seem that she and Tink have a shared history, which really means that Regina was horrible to her at some point. The flashback story arc finds us chronologically between Regina’s embrace of dark magic (following the failure to resurrect her lover, Daniel) with her apprenticeship under the Dark one, Rumpelstiltskin; and when she uses the genie’s (who would become the face in her “mirror, mirror”)feelings towards her in order to convince him to kill the King-and make her the top dawg of the Enchanted Forest.

This time in between finds her sullen, listless, going through the motions, and despising her place in life-resenting both her husband and the daughter that she has becomes so jealous and unforgiving of. Her conversation with a full-sized Tinkerbell following Tink’s very well timed rescue of Regina (Fairies know when they are needed), shows us a Regina we feel bad hating. She longs for her lost love and would give up her position and power to have that feeling and THAT happy ending that we envision as the definition of a “happy” life. But power and a desire for vengeance darken her heart, one already made cold by being brought up by icy, callous Cora; and we see her turn fearfully from her destiny, forever altering her own destiny as well as the man she walked away from.

Not Tinkerbell though. The Green Fairy had been pretty doe-eyed to this point-even if she had broken every Fairy-rule in Blue Fairy’s book. She had been out to help people as all good fairies do. And in this situation her desire to be “good” and in service to Regina -who she said deserved a second chance-outweighed the “bad” that was stealing pixie dust that would lead Regina to the “happy ending” all Fairy Tales are supposed to have, sitting in a tavern with his Lion tattoo. THAT is why the Blue fairy clipped her wings and stopped believing in her, though. Not Regina refusing to take that leap of faith, and instead retreating to her life of powerless power as the Queen of Nothing. Even if Regina had walked into that bar and instantly connected with Robin Hood (Swerrrrrrrve), it still wouldn’t have changed the fact that Tinkerbell disregarded even the most basic of “don’ts” when stealing the pixie dust in the first place. Tink made her choice and whether or not her magic worked wouldn’t have changed a damn thing in her life.

It would have changed Regina’s however. She could have been happy and perhaps left Leopold instead of arranging his death, and her heart would have been less dark because of it.  She wouldn’t have continued her foray into dark and destructive sorcery. Her father would be alive. She never would have been so rejected by all the people of the Kingdom and forced into isolation which of course led to the Curse that robbed the inhabitants of the Enchanted Forest of their former lives. Her choice could have had profound effects on everyone.

But when the show is about the freedom to make our own lives in spite of our destinies, one has to wonder how much could have really changed. If Regina met Robin Hood, who is to say that Emma and Baelfire would have ended up where they did. Baelfire had gone to Never ever land and is a bajillion years old. And we don’t even know how he escaped Pan. If destiny does exist, and Henry really was foretold as the one who is “The Truest believer,” then Emma and Neal needed to be where they were and as damaged as they were in order for Henry to be conceived. It is very likely that this never would have happened if she grew up in the basking glow of her perfectly pure parent’s love- who never would have met if Snow had not been on the lamb. Much like LOST, choices matters…but only as much as destiny allows it. And some things seemed like they just had to happen the way they happened.

Given that, Baelfire’s speech is poignant, even if it is futile. He had made the choices he made regarding Emma because it was needed to fulfill her destiny. If she had settled into a life with Neal/Bae in Tallahassee then she would have kept Henry and would have never been brought to Storybrooke to break the curse (or maybe her true love for her son would have done it anyway). If you love someone you should definitely tell them because our time is fleeting and our lives our temporary. We don’t always get second chances (although the Fairy motto insists we get at least that), but when we do we should realize the gift we are given and that  it would be foolish to squander it. Which is what leads Mulan to seek out Aurora to profess her love to her (Swerrrrrve) and what will most likely lead to Mulan actually telling her down the line when her news isn’t overshadowed by the Princess’s other news of being with child.

Throughout all this, we finally see Henry (who compared to last season is more young “dude” than boy) in Pan’s camp. Pan is trying to both woo him with his manipulative head games, and also show Henry that his very existence was shown to Pan a long, long, long time before Henry was born. Henry is the actual Savior, not Emma, and it is his destiny is to bring magic to every realm in the universe, something I would imagine he is opposed to considering his feelings on its use.

I am anxious too see how fast things heat up now considering that everyone who is important and needed is in Neverland. The pieces have fallen into place.

·       Lesbian subtext with combining magical powers leads to actual lesbian love by episodes end. Zero to Sixty in an hour.

·       How did we not see Mulan coming? She wants to be one of the boys, determined to prove that she can do what they do. Looking back, it all makes sense really.

·       One more thing about that: I am very impressed that Disney would be open minded enough to let the Mythology of one of their major characters be changed in such a significant way. I know I’ll never be able to look at the movie the same way again and will always see it with this trajectory. Kudos!

·       If Regina’s heart is that black, and the darkness gets “a taste” and wants the person who has been bitten by it if you will, then I worry about Snow…especially given the bickering and the slap from the premiere.

·       Given all the religious symbolism about forgiveness and purity and Saviors, Snow is downright saintly considering the amount of times that she has turned the other cheek with Regina. Not even the Blue Fairy gives you a third chance.  The blackening of her heart changes that, highlighting that desire for vengeance as a very “human” feeling. Human and Divine?

·       I didn’t like that prognosis for David. Surely we find a way to save him AND Gold right?

·       Some of the CGI like when we first saw Neal were pretty horrible. That is one of my only major complaints with the show week in and week out. Wonderland was even worse in that aspect.

·       I’m convinced that Storybrooke has been overrun by crazy biker gangs or something. Not going to be a good scene when we make it back there eventually.

·       I like the way they highlighted the many extremes that have always been a part of Tinkerbell’s personality. She is SUPER trusting and helpful even though she knows that Regina is bad news. At the same time we see that her anger and desire to pay Regina back for “ruining her life”illustrating the jealous, angry Tink of the Peter Pan animated classic. I don’t know if she will get cold feet in betraying Pan, or if her desire to see Regina “lose” is too overwhelming, but she is going to play a HUGE role in what happens from here on.

·       The scene with Henry shooting the arrow at Pan and Pan stopping it was very similar to Regina’s near execution, prior to the Blue Fairy saving her at Snow’s behest.