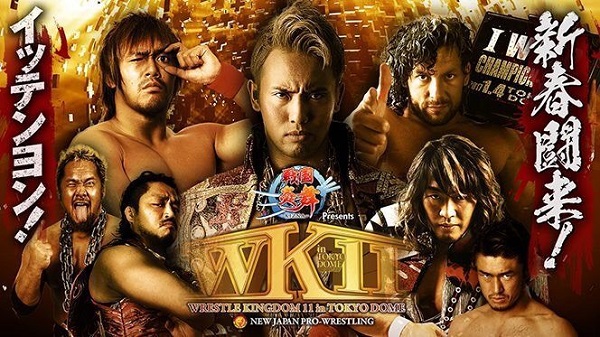 Happy New Year one and all! As most of us emerge blearily from several weeks of excess, New Japan Pro Wrestling prepares for its annual January 4th spectacular from the Tokyo Dome. I’ll be reviewing the show on Wednesday, but for those of you interested in watching but unsure as to what to expect, here’s a primer…

This is the biggest New Japan Pro Wrestling show of the year, with every NJPW title (and the Ring of Honor world title) on the line. The show is headlined by Kazuchika Okada vs. Kenny Omega and Tetsuya Naito vs. Hiroshi Tanahashi.

The event starts at 5pm JST (that’s 8am GMT, 3am EST, 12am PST), with the New Japan Rumble on the pre-show starting at 4.10pm JST. More convenient for me in Cardiff than for those of you in New York, but assuming you’ve not got work the next day, this is one show that’s worth staying up for.

You can watch Wrestle Kingdom live and legally on the NJPW World streaming service. It’s very good, costs roughly $8.50 a month, and can be cancelled at any time. Here’s the English sign-up page. If that’s not clear enough, here’s Okada showing Rocky Romero how it’s done.

There’s an English commentary option again this year, with Kevin Kelly and Steve Corino broadcasting from ringside, and AXS TV in the US will also be broadcasting the show in parts, starting January 13th, with Jim Ross and Josh Barnett on commentary duties.

Back on Wednesday with the review. If you watch the show – enjoy! See you then.