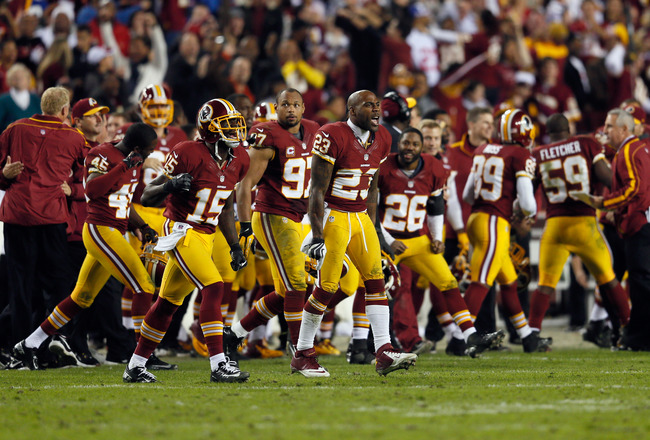 The Washington Redskins look to build upon their NFC East title from a year ago, though questions about quarterback sensation Robert Griffin III’s health following offseason ACL surgery, as well as avoiding the dreaded sophomore slump are key to a repeat NFC East title, which would be the first for the Redskins since 1983 and 1984. It is also a big season for fourth year Head Coach Mike Shanahan, who has been building something in Washington, but are the fruits of his labor finally paying off?

The Redskins managed to keep many pieces of their NFC East winning team together, which is pretty remarkable in this day and age. Griffin does have a new target on offense in rookie Jordan Reed, which could also help ease rusher Alfred Morris’ attempt at avoiding the sophomore slump. About the only thing missing from the Redskin attack is some potent wide receivers. And while it seemed things were getting cleared up with the signing of Devery Henderson, but he was released earlier this week!

On defense things do look like they will be keeping on trucking. The return from injury of Pro Bowl Linebacker Brian Orakpo should be able to get the Redskins to rebound from a bad season overall. Former Buffalo Bill Nick Barnett should be a key reason for any such linebacking corps turnaround as well.

Per usual, games in the NFC East will be key matchups, especially two late season games against the Giants.  And it probably would be a safe bet that the Giants would love nothing more than to end the Redskins’ season on December 29th!  Other big matchups include an early clash with the Packers on the not quite yet Frozen Tundra, and a mid-season meeting with the 49ers at FedEx Field. Games with the AFC West should also keep the Redskins in the mix come playoff hunt time.

An obvious choice of course, but sometimes going with the obvious can be the best way of doing things. RGIII was downright phenomenal in his rookie season, but is he completely healthy and can he be the same again are the questions that remain. He probably will and should avoid the dreaded sophomore slump. But both are strong factors as to why Griffin is once again a player to keep an eye on.

This should be an interesting season in Washington. Will Griffin rebound from the ACL injury and shake off the “sophomore slump?” And of course how will the team respond to being the hunted in a usually hotly competitive NFC East. It is hard to say that they will take a step backwards, but this is a team that I can see easily surviving the scrum that is usually the NFC East and Wild Card races.

As things usually are in the NFC East, the division title will most likely be coming down to the final weekend of the season. No doubt the Redskins will be in the midst of the pack, if not most likely at the top of the heap for a Wild Card chase. They do have a defending division champs’ target on them and the defense does need to rebound, as well as questions about the passing game. But overall things are looking up in DC, and there is no reason, barring Griffin falling apart due to health or a sluggish start, to expect a regression for the franchise. 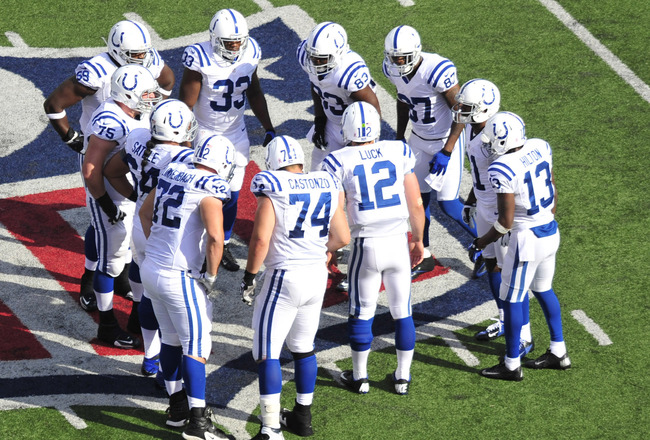 The organization that held the #1 overall pick in the 2012 draft was supposed to be in full-rebuilding mode, right? Let’s be honest, many NFL enthusiasts and analysts projected the Indianapolis Colts to be picking at the top of the draft once again in 2013. This obviously wasn’t the case. The Colts were one of the most exciting teams to watch in 2012, and no one can argue just how impressive QB Andrew Luck was in his rookie campaign. Not only were the Colts fun to watch in 2012, but also the organization showed true character and resiliency when head coach Chuck Pagano was diagnosed with a form of leukemia. It’s truly remarkable how Indy finished 11-5 and clinched a playoff berth; however criticism still remains pertaining to the “easy” schedule in 2012 and how the organization over-achieved from a record standpoint. Maybe so, but if Luck continues to progress into his 2nd NFL season and the front office continues to build key pieces around the franchise QB, the Colts will be right back in the playoff hunt.

The Colts didn’t really bring in any big names into the fold via free agency, but S LaRon Landry certainly headlines the FA class. The hard-hitting safety should have no problem bringing some physicality to a defense that has serious question marks heading in the 2013 season. Other than inking Landry to a multi-year deal, there’s not much to be desired about Indy’s offseason additions. RB Ahmad Bradshaw has been a productive RB at times, but can he stay healthy? QB Matt Hasselbeck does become one of the more solid backup quarterbacks in the NFL, but I’d be surprised if he saw a single snap during the regular season.

At one point, DE/OLB Bjoern Werner was considered the top defensive lineman in the 2013 draft class. However, his stock fell during the draft process, and he’s pretty much considered a raw prospect that needs a vast amount of coaching and seasoning. He’ll definitely have a prominent role after the departure of longtime Colt: Dwight Freeney.

Indy didn’t suffer many significant losses through free agency, but that’s because the team isn’t exactly rich in talent right now. The Colts did lose Dwight Freeney; a true mainstay of the organization, but the NFL is a young man’s game and the player has had trouble staying healthy throughout the majority of his career. Other players such as S Tom Zbikowski and OT Winston Justice did have starting roles, but the organization obviously thought they could do better from a personnel standpoint.

2013 won’t be a cakewalk for Indianapolis, as no other NFL team will take the Colts lightly after their amazing 2012 season. Indy will be tested in Week 3 at San Francisco in what looks to be an extremely physical matchup. It should be a nice test for a young team like the Colts who may need to gain some mental toughness. Who isn’t excited for Luck against Manning? The primetime matchup in Week 7 has plenty of storylines and possible playoff seeding scenarios on the line. The 1st goal of most NFL teams is to win their respective divisions, and for the Colts to achieve this, they need to get past the defending AFC South Champions: the Houston Texans. Indy will travel to Houston in Week 9 for a crucial Sunday Night Football matchup. The two teams will meet again in Week 15 in what could very well decide the AFC South champs.

Can the impressive wide receiver continue to build off of his sold rookie campaign? The small receiver from FIU came out of nowhere with 50 receptions, nearly 900 yards receiving and 7 TD’s. The kid looked like a season vet in 2012 and offers a nice compliment to WR Reggie Wayne.

Let’s face it, the Colts did overachieve in 2012 and they won’t be sneaking up on anyone in 2013. Whatever the end result is record-wise for Indy, they’ll still be a competitive team on a week-to-week basis. The team never quit in 2012 after all of the heartbreaks on and off the field. Colts are definitely a mentally tough team, however the NFL is about surrounding your franchise QB with enough talent to win games. I’m not sure the Colts have done enough in the offseason to do so.

Andrew Luck has a ton of responsibility and hype leading into the 2013 season. Expectations are high for the player, and it’s hopeful that Luck will progress into his 2nd NFL season. With that being said, I don’t believe Indy has enough talent on the defensive side of the ball to contend with the elite NFL teams; they’re major question marks on all three levels of the defense. I like the pieces in place at WR and TE, but can the Colts protect Andrew Luck and/or run the ball consistently? Only time will tell, but I see the Indianapolis Colts taking a step back in 2013.