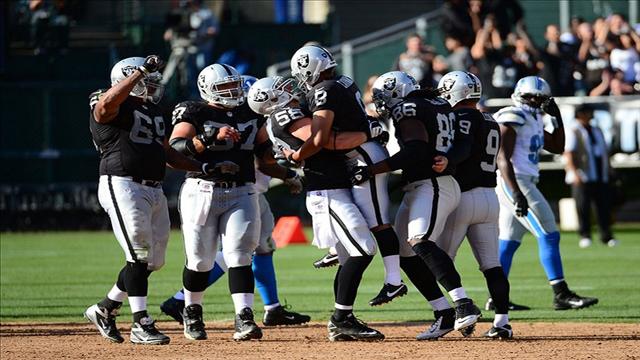 Since their loss to Tampa Bay in the 2002 Super Bowl, the Oakland Raiders haven’t so much as sniffed a playoff spot, and have generally been regarding as the laughing stock of the league. Shuffling through head coaches and players every few years, the franchise has failed to achieve any semblance of consistency on the field.

This offseason has brought more of what fans have come to expect from the Raiders – seemingly random maneuvers with no real sense of an overall plan. After trading a first and second round pick two years ago for Carson Palmer, the Raiders finally had some fairly consistent production at quarterback. Despite Palmer leading a Top-10 offense and passing for over 4,000 yards, the Raiders had enough holes that they could only muster a 4-12 record.

This year, the Raiders give it another shot with 2nd year coach Dennis Allen, only with a new QB at the helm. Palmer was shipped off to the Arizona Cardinals for the swap of 6th and 7th round draft picks, along with a conditional draft pick. This was right after Oakland traded a 5th round pick for career backup QB Matt Flynn, still living off the reputation of his 480 yard, 6 touchdown game against Detroit in 2011. The move was made seemingly with the idea of Flynn starting, but a QB controversy has already emerged in the preseason, with the great play of Terrelle Pryor forcing the controversy. A second losing season is often the last chance for a Raiders head coach, and Dennis Allen’s decision making at QB will be crucial to the continuation of his stint.

As of this writing, it appears that Flynn will start the season as the backup to Terrelle Pryor, which at least shows Dennis Allen is willing to make tough decisions and take risks in order to win games. While starting Pryor is the right move, he may soon look fondly back on his days on the bench. The offensive line did little to improve from last year, and the best player may be 2nd round rookie OT Menelik Watson. Additionally, Pryor will have to work without the benefit of having Darrius Heyward-Bey and Brandon Myers to throw to.

On defense, the Raiders lost veteran Richard Seymour, who still has not signed with a team and may opt for retirement, safety Michael Huff, and line backer Phillip Wheeler. In their stead, the defense seeks help in faces old and new. After seven seasons and a Super Bowl ring with the Green Pay Packers, safety Charles Woodson returns to the team that drafted him, though he is a shell of his former self as a player. In the secondary, the Raiders are hoping for big things from rookie CB DJ Hayden, who suffered from a near-fatal heart condition in college and has not looked good in the preseason.

If the Raiders are going to make anything of their season, they are going to have to capitalize on their first home game against a team with many questions of its own in Jacksonville. Division rival San Diego also faces questions of its own, and if the Raiders are going to compete in their division the Week 5 matchup at home will be a crucial. Finally, the Raiders end their season against division rival the Denver Broncos, who will likely have a playoff spot locked up by then. Raider Nation will be fired up for this game and, regardless of the whether the team is far out of the playoff picture or has miraculously worked its way into contention, it promises to be one of the best games of the season for the fans.

In case it hasn’t been obvious enough yet, all eyes are now on Terrelle Pryor. Barring unforeseen circumstances, Pryor will likely be the starter Week 1 and the success of the team hinges on his ability to quickly blossom into an NFL starter. The weak offensive line will make Pryor’s mobility the key to his performance, and I suspect that is one of the primary reasons Coach Allen is favoring the former Ohio State star QB.

With so many questions and a track record of letdowns, it’s difficult to peg the Raiders for any better of a finish than their 4-12 2012. A few winnable games on the schedule combined with some continued great play from Terrelle Pryor and a healthy Darren McFadden – a combination of events that may take more luck than anything else – should find the them scooping up a handful of wins once again.

With seven coaches in the last decade, history has shown that a Raiders coach in the 21st century typically doesn’t last much longer than one or two seasons. The only way for Dennis Allen to be an exception is to field a winning team, or at least a competitive one. If his squad can buy into his defensive plans, and a potentially dynamic combo of Pryor and McFadden can, they could indeed surprise and field an exciting, respectable team. Of course, history also tells me that I’ll see it when I believe it, and I remain once again skeptical of a magical Raiders season. 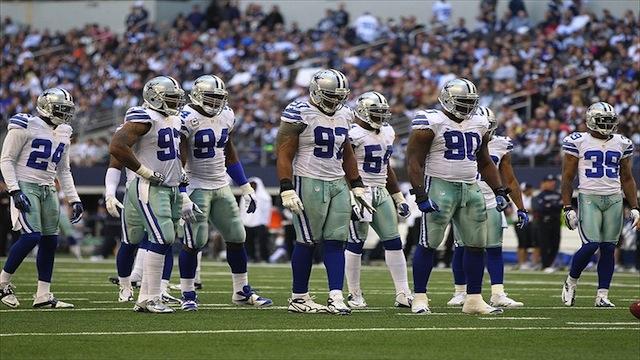 For the second consecutive season, the Dallas Cowboys are coming off of a disappointing 8-8 record. So, what’s different for “America’s Team” in 2013, you ask? For one, Head Coach Jason Garrett is stamping his approval ranging from the front office all the way to player personnel. Because of recent draft classes, Dallas has revamped its roster with talented players such as Dez Bryant, Sean Lee, Bruce Carter, Tyron Smith and so forth. With all of that being said, Garrett is unequivocally on the “hot seat,” and failure to lead Dallas to the playoffs will undoubtedly seal Jason’s fate. QB Tony Romo signed his new, lucrative contract; he’ll be the signal caller in “Big D” for the foreseeable future. Uncharacteristically, the Cowboys somewhat enter the 2013 season “under the radar.”

Jerry Jones was probably itching to open up his wallet and spend top dollar on the best free agents available. The scenario was essentially impossible because of Dallas’ salary cap issues. With numerous restructures of veteran contracts, the Cowboys were able to bring in LB Justin Durant and S Will Allen, and both will be starters to begin the season. Dallas finally invested a high draft pick in an interior offensive lineman, and Travis Frederick has had rave reviews thus far. Gavin Escobar has been a questionable pick thus far, but Terrance Williams, J.J. Wilcox and even DeVonte Holloman have had solid camps and preseasons.

When phrasing offseason “losses,” I’m not exactly sure that’s the right frame of words. I’d categorize it as “cutting bait” with below average to mediocre personnel. It was clear that veterans such as Felix Jones, Kevin Ogletree, Kenyon Coleman, Marcus Spears and Mike Jenkins had run their course in Dallas. Heck, the Cowboys’ starting free safety last year in Gerald Sensabaugh even retired.

The NFC East is usually a battle to the very end, and the Week 1 matchup between the Cowboys and the Giants will be an exciting Sunday night matchup. In Week 5, Peyton Manning and the Broncos travel to AT&T Stadium in an intriguing matchup against Dallas. Week 6 against the Redskins is interesting because it’ll be the first matchup between the teams ever since QB Tony Romo threw that horrific, game-sealing interception in Week 17 of 2012. When Dallas faces Philadelphia in Week 17, playoff seeding could certainly be on the line of the Cowboys.

LB Sean Lee is considered one of the most physical and impressive linebackers in the game. However, his durability issues have concerned the Cowboys recently, but that didn’t stop the organization from signing the talented player to a long-term deal this past week. This is a huge season for Lee. He needs to prove to the organization, fans and his teammates that he can stay healthy for an entire season; he’ll have the opportunity in 2013 to do so as the leader of Monte Kiffin’s defense.

I expect Jason Garrett to stake his claim as the head coach of the future for the Dallas Cowboys. With play-calling duties no longer his responsibility, he’ll have the opportunity to focus on the team from a holistic standpoint; that should be a positive for Dallas. In a tough and physical division, the NFC East division usually comes down to the final week of the regular season, and I expect nothing less in 2013.

Even though Dallas flew under the radar throughout the offseason, I believe they’re ready to take the next step as they have some important pieces in place. WR Dez Bryant is primed for a huge year, the offensive line should be improved, DeMarco Murray and Miles Austin haven’t suffered injuries (yet), and the defense should perform better and create more takeaways in the 4-3 scheme. Dallas should surprise some people this year, and I see the star shining for the Cowboys in 2013.