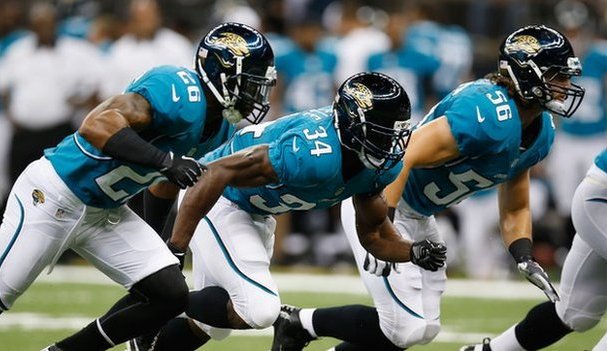 Despite picking in the top ten of every draft since 2008, Jacksonville hasn’t had much regular season success to show for those high picks. Their last winning season, and last playoff appearance, came in 2007. Last season was the low point, as they managed just two wins all year (and couldn’t even earn the number one pick for their trouble). Blaine Gabbert, nominally the franchise QB after being taken with the tenth pick in 2011, has struggled in his first two seasons, and is already looking like a bust. The last few years haven’t been pretty for the Jaguars, and this doesn’t look to be the season they turn that around.

Talk about an overhaul. You may notice I listed most of Jacksonville’s draft above; the first three picks are all likely to start in week one, and the round 4-6 picks could also get significant playing time if the players ahead of them are injured or underperforming. The defense will bear little resemblance to the unit that was among the league’s worst last season. Only five starters return, and one of those starters, Tyson Alualu, will switch positions (from defensive tackle to end). With all that turnover, and two rookies starting in the secondary, the defense can expect to go through some growing pains to start the year.

On offense, the Jaguars hope that second-overall pick Luke Joeckel can make an immediate impact on the offensive line. Justin Forsett was brought in to back up Maurice Jones-Drew, who is coming off a season-ending foot injury, not to mention a heavy workload in the preceding seasons. The wide receiver position is mired in uncertainty. Justin Blackmon, 2012’s number five draft pick, faces a four-game suspension to begin the year, and free agent pick up Mohamed Massaquoi was cut during the preseason. That leaves just Cecil Shorts and Jordan Shipley as the only wide-outs with any experience to speak of. Ace Sanders may see more playing time than most fourth rounders would expect. Throwing to that crew, Blaine Gabbert will have his work cut out for him trying to prove that he can be a capable NFL starter.

If the Jaguars hope to make any noise this season, a win in Seattle week three would be a great start. And if they hope to stay in the division race, wins at home against the Colts in week four and in Tennessee coming off a bye week would go a long way toward accomplishing that goal. If they’re out of contention early, they can at least hope to make a good showing in their one prime time game, against the Texans on Thursday night in week 14.

It’s make-or-break time for Gabbert, who remains the starter after poor showings in 2011 and 2012. He showed some flashes last year before missing the last six games with an injury to his non-throwing shoulder. He’ll have to show a lot more to convince team management that he is their quarterback of the future. Instability in the receiving corps, as well a thumb injury that will keep him out the remainder of the preseason, won’t make that easy, but the Jaguars need to make a decision soon.

There is little reason for optimism in Jacksonville this year. Both the offense and defense finished near the bottom of the league in 2012. While the Jaguars hope that Luke Joeckel will anchor the line for years to come, the rest of the offense is unimproved, and there is little chance he will have enough impact to change that ranking. The defense, on the other hand, underwent a drastic overhaul, and could improve quickly if the new pieces are a good fit. But it’s more likely that those pieces take a while to pick up a new system, and that the team is in for another rebuilding year.

While Jacksonville is likely to improve on last year’s 2-14 record, they are also likely to be out of playoff contention early. With a new general manager and head coach, the goal this year will be evaluating the talent on hand. Blaine Gabbert will likely be given every chance to succeed, as he and the rest of the roster are playing for their place in the team’s future, not for this season.

In 2012, the Tennessee Titans were a rather streaky team. For every two losses, they would pick up a win, but never really found themselves in contention in any way. Based on their scoring differential, they actually outperformed their expected win total by a game. Led by Coach Mike Munchak, who is now entering his third season at the helm, the Titans hope to get a full season out of third year QB Jake Locker for the first time. By the numbers, Locker was mediocre in his eleven starts, but definitely showed signs of competancy, leadership and ability that could flourish as more experience comes. The defense, however, was brutal, ranking last in the league in points allowed. The franchise will have to hope that some of their imports can help turn things around quickly.

In an attempt to shore up that leaky defense, the Titans imported some fresh faces on defense, specifically at safety. The team brought in the scourge of all Patriot fans, Bernard Pollard as well as George Wilson from Buffalo. Speaking of the Bills, the Titans went to town in pillaging Buffalo’s FA, inking Wilson, OL Andy Levitre and QB Ryan Fitzpatrick. Fitzpatrick is a downgrade from Hasselbeck as a backup QB option, but he is steady enough to maintain the ship if Locker can’t stay upright. Tennessee also brought in Shonn Greene to partner with Chris Johnson, hoping that Greene can recapture some of that late game burst if he is used in spurts and not as a feature back. Levitre and rookie Chance Warmack should help offset the loss of Hutchinson on the OL. The OL needs to be stout for this team because Locker needs all the help he can to stay healthy and also to assist Chris Johnson in scamping around the field. Locker did lose a big time weapon in athletic TE Jared Cook, but a full season from Kenny Britt, Kendall Wright and Nate Washington would go a long way in Locker’s development.

As discussed in previous previews, the Titans are a team that will need to rack up key wins early to have any shot at a playoff run. Right out of the gate, they travel to Pittsburgh, a team that always plays its best early in the year when they are at full healthy. A week later, the Titans are in Houston for a big divisional showdown with the Texans. If Tennessee can split those games, and more importantly, win in Houston, they may get some momentum and sound an early warning shot in the division. However, any goodwill built early could be in jeopardy come week six when the hit an NFC West buzz saw, traveling to Seattle (never fun, ever) and then returning home to face the 49ers. The Titans have very little room for error, so this two game stretch in the middle of the year could make or break the season for them.

After battling some injuries early in his college career, Hunter played a full slate of games in 2012 and finished third in the SEC in total receiving yards and yards per game. In high school, Hunter was a state champion in track and field, skills which the Titans hope will add to the team’s athleticism on offense. If Hunter can quickly pick up the playbook and the rest of the receiving corps stays healthy, the Titans could field one of the deepest WR sets in football. Add in a revamped OL and an all pro running back, and Jake Locker could be set up for breakout season if things go right.

Despite the retooling and the potential explosiveness of the offense, I just don’t believe Tennessee is quite ready to take a step forward in 2013. Locker needs to prove he can healthy, put up above-average stats and win games. Until he can do that, defenses will stack the box in an attempt to slow down Johnson and Greene. The Titans are in a weaker division, but I can’t see anyway they surpass the Colts and Texans, even if everything breaks right. The defense has a long way to go to even reach mediocrity and I do not believe the talent they imported was enough to make that drastic of an improvement. On offense, health remains the key, but one look at their schedule may make all of that moot. Even a few of their weaker games come against teams with stingy defenses like the Jets and Cardinals.

This is really a crossroads season for the Titans as they will need to decide if Munchak and Locker are the right personnel to lead this team to relevance or if they should bottom out and rebuild around new faces. At the end of the season, I think Titans will be eyeing a new QB at the top of a loaded draft and there will be a new coach making the decision. Unless the defense can make a dramatic turnaround and the offense can all stay healthy, I just don’t see them putting it together for a run in 2013. For now, it looks like another quiet season in Music City.