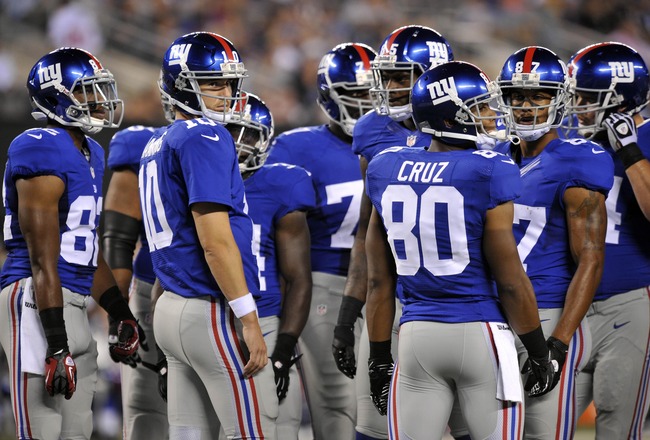 After yet another disappointing follow up to a Super Bowl winning campaign, the Giants look to regroup, and get back to their winning ways, though age and uncertainty cast a long shadow on the upcoming season. While he is a two time Super Bowl winning coach, this is a big year for Coach Tom Coughlin, who has to get the Giants back into the postseason.

Quarterback Eli Manning does not seem to be the problem, but changes to the offensive corps in 2013 should help the two time Super Bowl MVP get back into postseason competition. On defense though, as Osi Umenyiora departs, Jason Pierce-Paul recovers from injury, and Jason Tuck tries to rebound from a bad season, things are a bit more suspect. And while there has been an influx of talent to help offset the defections and injuries, time will tell if it is the right mix for Big Blue.

There is a sense of moving on and turning the page with the Giants transactions this offseason. Umenyiora, gone. Bradshaw, gone, Tynes, gone. While the one loss that probably will hurt is Umeyiora, there is a boat load of new talent, particularly to sure up a defensive corps that took a huge step back in 2012. Also the Giants needed to shore up the protection of Manning, and give him some more options.

All NFC East games will be big matchups for the Giants, especially the two Washington games that start and close the final month of the season, which as of late has been the Giants month to kick things into a higher gear. Two home games and a road trip with the top teams in the NFC North, and a late season home game against Seattle will go a long way to determine whether the Giants will be playing in January.

A player playing for his next payday is always an interesting player to watch over the course of the season. And Nicks should be no different, as he hopes to get a payday from the team in the same vein teammate Victor Cruz did this offseason.

While the Giants MO of late is to start slowly, and end with a flourish, it is a bit hard to see things working out this year. Too many question marks with the new talent, and returnees liter the roster. While things will not be horrendous, it is hard not to see this year’s team as a middle of the road squad.

Final Thoughts
The Giants have plenty of questions to be answered this year. Especially in terms of running game, and defense overall. But most of those questions appear to be more future based, and not necessarily for the year 2013. While Giant home games at MetLife Stadium in January, and if absolutely everything broke right, Sunday February 2nd, would be great, it does not seem to be a probability with this year’s team.

I don’t need to explain to you the mess that the Jets became last season. If you watch football and/or ESPN on a regular basis, you know the details. The Tebow Experiment crashed and burned, Mark Sanchez seems to be aging backwards like Benjamin Button and a handful of serious injuries led to the final deathblow for the season. Despite the media circus, the Butt Fumble, the ugly losses and anonymous quotes, the Jets still had a shot at the wild card down the stretch before completely imploding in the final weeks. They were a dropped Stephen Hill pass away from knocking off the Patriots in Foxboro, a game that could have swung the season around and thrust them into a first place tie. They didn’t win and things careened from there. The franchise saw some major front office and on field changes in the offseason, but Rex Ryan remains as head coach, I move I fully agreed with. New GM John Idzik has a plan in place, that is clear, but with a stout defense, a good offensive line and a couple of good offensive pieces, it isn’t out of the realm of possibility that the Jets could surprise some people this year and be more competitive than expected. They could also win two games. It’s all on the table in 2013.

When Idzik took over from embattled GM Mike Tannenbaum, he made it clear that nobody was safe and that all jobs were now considered open. The Jets were very busy on draft day, both with their picks and via trade. After sending rehabbing superstar Darrelle Revis to Tampa Bay, the Jets used their first round pick on highly touted cornerback Dee Milliner from Alabama. With Milliner on board, Antonio Cromartie will slide into the slot vacated by Revis, a role he excelled in last year. Gang Green also picked up DT Sheldon Richardson to add to a young, fast and developing defense. In round two, they bit the bullet and drafted Geno Smith out of West Virginia, immediately igniting a quarterback controversy. Finally, with Shonn Greene gone to Tennessee, the Jets turned to reloading the RB position, signing Mike Goodson and trading for Chris Ivory. The former was subsequently picked up on weapons charges and is battling the legal system and the latter is nursing a sore hamstring. With incumbents Bilal Powell and Joe McKnight in the fold, the Jets have a chance to field a very deep and effective backfield. I also want to quickly mention the addition of new OC Marty Mornhinweg, who will import the fast paced west coast offense he had been running with the Eagles, and who should be a huge improvement over Tony Sparano.

Outside of a few key pieces, the 2013 Jets will barely resemble the 2010 squad that knocked off the Patriots to make their second straight AFC Championship Game. Revis is gone to Tampa, and along with him go his yearly contract demands and rehabbed ACL…and all pro cornerback play. Shonn Greene took off to Tennessee, but he had hardly impressed in his two years as the feature back of the system, failing to deliver on the promise he showed when he first broke into the league. While the defense has turned over and gotten younger, they are starting to lack some of the veteran leadership that made the unit so good over the last four years. Defensive QB Bart Scott is gone, so that will be a blow on defense even though his actual play on the field had declined severely. One of last year’s surprises was LaRon Landry, who played a full season at a high level. He cashed in on that performance and signed on with Indianapolis, replaced in the Meadowlands by his brother Dawan. In addition to Revis and Landry, the biggest blow may come via the loss of DL stalwart Mike DeVito, who had emerged as a legit run stopping force in New York. DeVito left for Kansas City and his presence in the middle of the line will be missed. Dustin Keller also left for Miami, which could cause issues for Mark Sanchez should he win the starting gig. He is replaced by Kellen Winslow and Jeff Cumberland, both of who need to prove they can stay healthy in order to be viable replacements.

Most of the Jets key games come early in the year, because those are the ones that will determine the path this team will take. They have a very rough stretch early on, starting with week two when they play the Patriots in New England on Thursday night. It will be a very big test, coming off an opening game against Tampa Bay and a chance to maybe shake up the division a bit early on. A win there would be huge because starting in week five, the Jets go to Atlanta, home for Pittsburgh and New England, at Cincinnati and then home for New Orleans before the bye. That is a very tough stretch. Things get easier after the bye, but they will still have two games with Miami over the final five weeks. If the Jets can get to the by at 4-5, they will have a legit chance at a Wild Card based on their softer back end of the schedule.

Muhammad Wilkerson quickly put himself on the radar of scouts and analysts with a very good sophomore campaign and he has set himself up to be an anchor on a refreshed defensive line. Pro Football Focus recently ranked him as the second best 3-4 DE behind JJ Watt, which is some pretty damn fine company to be in at such a young age. As the defensive continues to rebuild, Wilkerson will be a key focus to become the leader of the group. If he can continue to improve his game, this is the year he should finally break through and put himself on the national map, including a trip to the Pro Bowl.

There is a lot to like here. There is also a lot to hate. There is a lot of potential for things to go very well, or very poorly. As stated above, the Jets need to survive that first half stretch with a decent record, hovering near .500. They also need to pick a QB and stand by the decision. At the end of the day, I think this team will be slightly better than last year, but in a way that would be a major improvement considering most experts have them set to be a bottom five team in the league.

GM John Idzik still has a lot of work to do, but the framework is in place for a fairly quick rebuild, mainly because the defense is young and fairly stacked. The team still needs offensive weapons, but the process is underway. Two major decisions lie ahead that will determine where the Jets are headed over the next few years. One, they need to decide if Rex Ryan is the right coach to lead the rebuild. I think he is. You can’t restart with a whole new system every few years, there needs to be stability in place. Ryan is a great defensive coach and motivator. If Mornhinweg can get the offense on track, Ryan’s job should be safe. Two, they need to find out if Geno Smith is the QB of the future, and they need to figure it out now. I wouldn’t waste any more time on Sanchez, who is gone after the season regardless. Start Smith and see what you got over a full season, because the next draft is stocked with QB talent and Idzik should have enough information to make a decision on the future of the team’s most important position. This is a make or break year on many levels, but it is also the start of something fresh. if the Jets play hard for Ryan, the defense lives up to its promise and the offense can limit turnovers and play efficiently, this team may just surprise some people with a feisty showing in a weakened AFC.