Barbara Gordon is no stranger to dusting herself off when disaster strikes… so when a fire destroys everything she owned, she spots the opportunity for a new lease on life — and seizes it! Following the rest of Gotham’s young adults to the hip border district of Burnside, Barbara sets about building an all-new Batgirl… and discovers all-new threats preying on her peers! It’s a re-invention of Batgirl from the boots up, by the incredible creative team of Cameron Stewart (BATMAN INC.), Brenden Fletcher (WEDNESDAY COMICS), and rising star Babs Tarr!

Picked because: Batgirl’s new creative team is taking the character in a bold new direction that looks to open the character up to whole new experiences and potentially a new audience. Those who’ve been reading Gail Simone’s run for the last 34 issues (not counting the Futures End tie-in or Annuals) know Barbara Gordon has been through some really rough times lately. Dad arrested, psycho brother, Dick Grayson “dead” (she doesn’t know he’s alive and working as a double-agent in Spyral) …it’s a rough patch. Making the decision to go back to school and distance herself from the rest of the Family (this is set post-Batman Eternal as are all of the Bat-books beginning at issue #35) makes a lot of sense. This is Barbara getting her life in order, but she just can’t help being Batgirl. The new look is out of necessity and seems quite practical for the character. The previous creative team reminded fans why Barbara is the best Batgirl ever and this new team seems to be trying to remind fans that she’s human underneath the mask, too. She’s also just 21 years old and hasn’t experienced a lot of what life can be like at that age just yet. This won’t be for everybody, but those who want a different, more vibrant feel to their Batgirl will definitely enjoy it. And those who’ve never read the character before have a chance to start fresh here. It’s a new day for Batgirl and for curious new readers.

From the superstar creative team that brought you a new start to the Caped Crusader comes the story that could end him. Be there in October for the biggest, deadliest and most epic story yet from writer Scott Snyder and artist Greg Capullo – “Batman: Endgame” begins here!

Picked because: The next epic Batman arc from the team many (myself included) consider THE definitive Batman creative team of the generation begins here! Don’t let the name mislead you, though. This isn’t the end of the line for Snyder and Capullo, but it could well be the final story arc for a major character. Few details have leaked about this story as the team has gone to great lengths to keep it under wraps, but one detail we’ve just recently learned is that this story will have something to do with the return of The Joker and feature the largest cast of Batman villains and characters that Snyder and Capullo have ever put in a single story arc. At only six issues, it’s no wonder the page count was upped and the price point increased to accommodate the space needed. Adding another 10 pages for a $1 more is going to make some fans unhappy, but when those pages are also written by Snyder, it’s hard to complain too much. Again, all Bat Family issues beginning at #35 take place post-Batman Eternal so some things are going to look a bit different in Gotham, but Snyder has promised the story won’t spoil what’s happening in Eternal, but might tease some coming developments. If you enjoyed Zero Year, Death of The Family and The Court of Owls, there’s no reason you shouldn’t grab every single issue of this story. And, luckily, it’s all self-contained to this one title rather than being another Bat-Family crossover. Get ready folks, this is likely the book of the week! 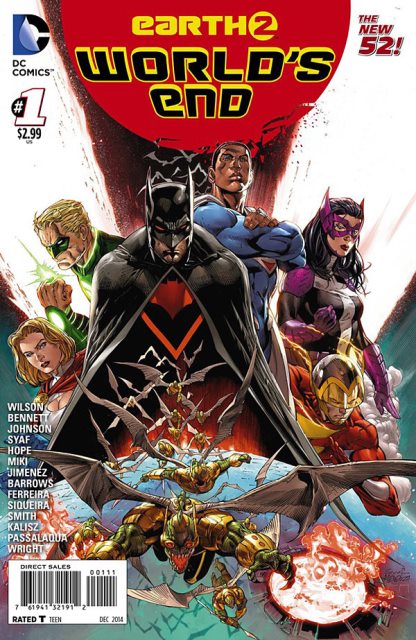 Daniel H. Wilson, New York Times best-selling author of Robopocalypse and Robogenesis, delves into the world of EARTH 2 for the start of a new weekly series that will see the origins of a world much like the New 52 Earth, but yet so different. A world that saw its greatest heroes die – and new ones take their places. A world where Superman became it’ greatest villain, and a man named Zod seeks to save it, along with Batman, Green Lantern, The Flash and other heroes. A world they can only save from the forces of Apokolips through great personal sacrifice! Death and destruction will follow each week, and you’ll never know who will live and who will die! It all begins with this extra-sized debut issue!

Picked because: DC’s next limited weekly series begins here and shows us how the end of Earth 2 is set to begin. Or can the end be prevented? Futures End has been giving us some really crazy, fun developments in the hypothetical future of Five Years Later, but could we be seeing that future getting changed here? If you’ve been reading Futures End and/or Earth 2, this is the next stop for you. Darkseid can’t be too happy about his (clone) Superman falling apart and the heroes of Earth 2 rallying to defeat his forces. There are lots of questions to be answered for the newly returned Power Girl and Huntress, too. More importantly, this marks the second ongoing writing gig for Marguerite Bennett at DC Comics this week (see also Earth 2 #27 which she co-writes with series regular Tom Taylor). Bennett has made a name for herself very quickly in the DC ranks and it’s great to see her finally get a regular writing assignment for the company and on one of its best titles. There will be plenty of action and suspense to go around for this book since the future is now in flux and we have no idea who will actually make it through this one. Like the other weeklies, this story will end in March 2015, making it the shortest of the weekly books thus far. While your wallets aren’t going to like adding a new weekly, with this team and this story at least it’s likely to be a good read and it won’t be around all that long. 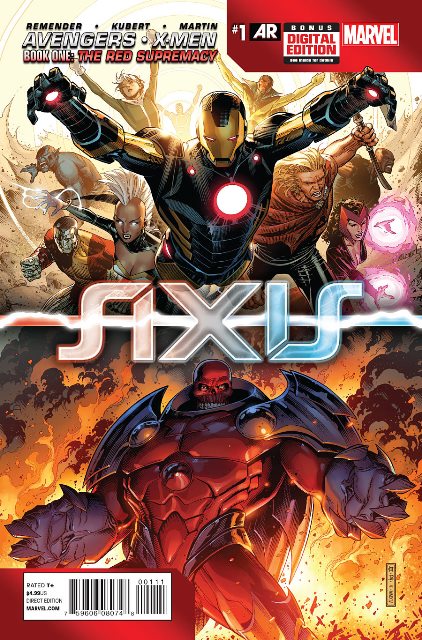 ACT I: THE RED SUPREMACY

Picked because: Marvel’s fall event starts with a bang and the “inversion” of heroes and villains from across the spectrum. Heroes now become villains and villains become heroes as the world gets turned on its head by The Red Skull. If you’ve been reading Remender’s Uncanny Avengers, this is the big event you’ve been waiting for. The sequel to Avengers vs. X-Men and the culmination of everything that’s been not-so-quietly building since Uncanny Avengers #1. It’s going to be a bumpy, fun ride for sure. Of course, this could also wear some people out considering we just finished Original Sin. Event fatigue is a real thing, but c’mon, Marvel has been in a state of constant even for years and if you’ve stuck around through all of those…at least they’ve gotten more entertaining. And with Adam Kubert on art, you can bet this will be one of the best-looking event books Marvel has ever produced. And getting Rouge and Scarlet Witch working together is a great combo idea Remender has been playing with for a while now. Sure, it got off to a rocky start, but here’s hoping for a great team dynamic that proves to be the next must-read duo for Marvel. And Remender is nothing if not a big idea guy who also gets how to develop characters. He’s been a go-to Marvel guy for a while now and this looks like the book to show us why. 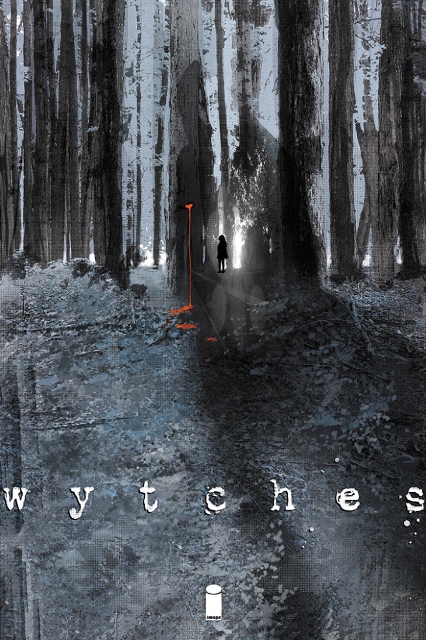 Across the globe, century after century, men and women were burned, drowned, hanged, tortured, imprisoned, persecuted, and murdered for witchcraft. None of them were witches. They died protecting a terrible and hidden truth: witches, real witches, are out there. They are ancient, elusive, and deadly creatures that are rarely seen and even more rarely survived.

Picked because: The Detective Comics team that brought us The Black Mirror has reunited to scare the living daylights out of us just in time for Halloween. This is likely to be the scariest comic you’ll read all season. Snyder is a master storyteller and Jock is one of the most iconic artist working today. This is a must-buy on the creative team alone, but the good news is, you’re in for a killer story on top of it! Advance reviews are calling this one of the best comics of the year and one of the most terrifying ever. If there’s one thing Snyder does better than just about anyone, it’s cut to the heart of us and find out what frightens us at our core. It’s not about the jump scares (though you should be ready for those, too!) it’s about unsettling you and letting those dark creatures find their way from the page to your mind and keep you guessing at every little bump and creek you hear at night. Image Comics continues its dominance in the realm of creator-owned series here and if you’re a horror fan, you cannot miss this book. If you buy no other comic this week, make sure you get this one. 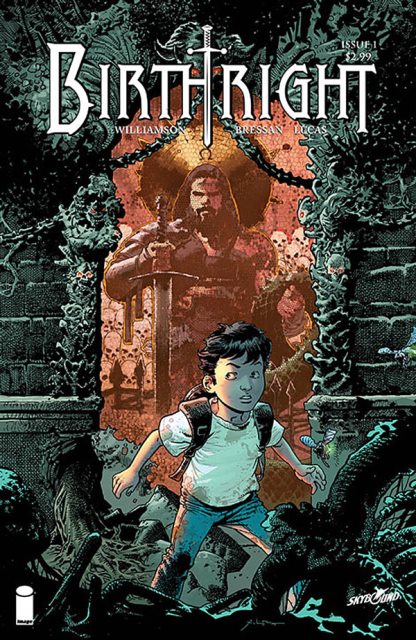 Art and cover by Andrei Bressan and Adriano Lucas
$2.99

For the Rhodes family, losing their son was the most devastating thing that could’ve ever occurred… but it couldn’t prepare them for what happened when he returned. Skybound’s newest original series turns fantasy into reality in this EXTRA-SIZED FIRST ISSUE for just $2.99, by creator/writer JOSH WILLIAMSON (GHOSTED, NAILBITER) and artist ANDREI BRESSAN.

Picked because: Fantasy adventure stories might not sound like something you’d expect from Joshua Williamson considering his horror expertise, but this book looks like all sorts of fun! What’s cool is that this book is exploring what happens when the kid comes home after his big adventure. How do get back to normal life after you’ve spent a long time in a magical land? That’s the concept Williamson is working from and he looks to be making the most of it. The drama of this one is on two fronts as we see the parents of main character Mikey, desperately looking for him and dealing with accusations of foul play in his disappearance while the truth is he was whisked away to a fantasy realm of magic and monsters. This is another title from the SkyBount imprint so expect nothing but story pages and no ads. Oh, and the incredibly beautiful art of Andrei Bressan and Adriano Lucas.