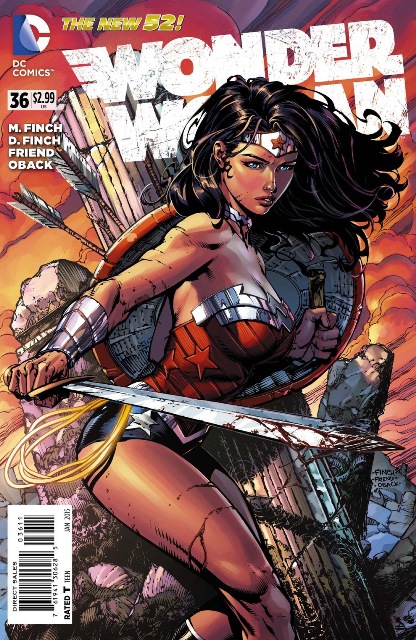 As this new epic begins, the fate of the Amazons is about to be revealed, major new characters will be introduced and a new villain will arrive with enough power to defeat the combined might of Wonder Woman and her Justice League teammates! Don’t miss the start of this story that guest stars Swamp Thing! It will define what it takes for Diana to fulfill her destiny as Wonder Woman!

Picked because: Meredith and David Finch have some tremendous shoes to fill. Brian Azzarello and Cliff Chiang crafted a modern masterpiece with their Wonder Woman run, which spanned 35+ issues. To call it a herculean task is an understatement. But, the Finch duo is no stranger to comics. David is well-known as a great artist at both DC and Marvel while his wife Meredith has written a few projects at Zenescope. Their Wonder Woman is heading in a different direction from the previous series and will include a much closer tie to the Justice League and to WW’s current love, Superman. The previous series existed almost in its own bubble with little to nothing suggesting it took place in the same world as the rest of the New 52. This new series could probably carry a big “#1” on the front cover instead of its current numbering since this will be the perfect place to jump on for new readers. The new creative duo has stated they plan to keep everything the previous team put in place, but that their story will go its own direction and not make new readers worry so much about “playing catch up.” So far, the art looks great and should serve the character well. Hopefully everything comes together to keep this book as one of DC’s absolute best. 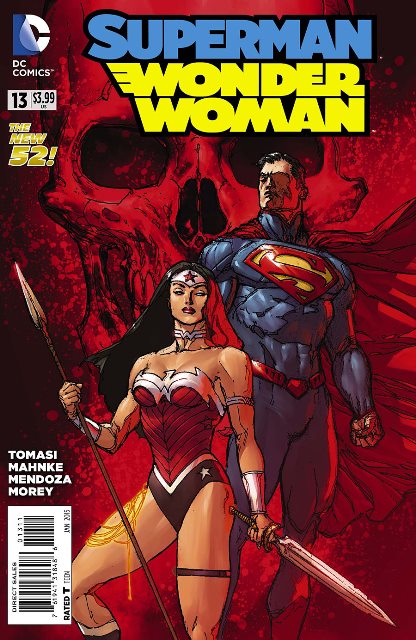 Welcome the new creative team of writer Peter J. Tomasi (BATMAN AND ROBIN) and Doug Mahnke (JUSTICE LEAGUE)! The unity between Superman and Wonder Woman will be tested as never before as a mysterious group of villains make their New 52 debut – but first, Atomic Skull and Major Disaster cause trouble for our favorite heroic couple!

Picked because: Speaking of new creative teams for Wonder Woman, her other book is getting a new one, too. Tomasi and Mahnke have each worked with Superman and Wonder Woman in separate books before, but this will be their first major team-up effort with both characters. Both have also worked closely with Geoff Johns during his Green Lantern and Justice League stories. Tomasi said he wants this book to be about big action and showing Superman and Wonder Woman as a strong and united team that also has to deal with the same kind of issues any young couple might face. And that this issue starts us back at their first meeting, it’s clear where the tension comes from. They’re very different from each other, but have similar goals. It’s all about perspective for this story from the start and the two leads clearly have different world views. Sometimes that can create a good balance, but it can also breed some animosity. Tomasi has done a great job with Batman and Robin since the New 52 launched and if there’s one thing he does well, it’s a team dynamic. His Green Lantern Corps run is strong evidence for that, as well. Mahnke is no stranger to the world of big superheroics so get ready for some truly epic panel layouts and iconic images of both heroes. Charles Soule and Tony Daniel left a mark on this book that will be tough to duplicate, but I’d say this title is in more-than-capable hands. 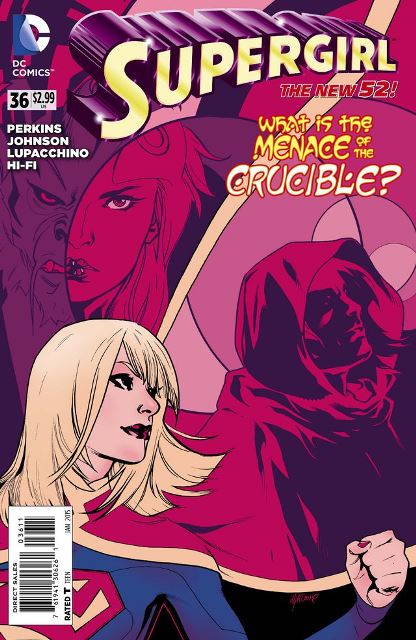 Art and cover by Emanuela Lupacchino
$2.99

The new writing team of Mike Johnson and K. Perkins enroll Supergirl in the Crucible Academy! Against her own will, Kara has been selected to join the mysterious academy, which promises to train her and other beings of cosmic importance to serve the forces of good in the universe. But who’s pulling the strings behind the academy? And what are Kara’s chances of survival if she decides to drop out? Guest-starring Superboy!

Picked because: Here’s another creative team change up that brings in some new and old blood. Mike Johnson launched Supergirl for the New 52 and had a solid book on his hands…that way too many people passed on simply because it was Supergirl. Now, the character has put her anger issues behind here and is stepping up to be the hero she was meant to be. Kate Perkins is new to comics and said that Supergirl will be joining what’s essentially a sci-fi Hogwarts for super-powered kids like her. It’s going to test her abilities and is meant to make her a better hero. Artist Emanuela Lupacchino is bringing a new aesthetic to the table, too, with a new Kryptonian armor that mirrors Superman’s (and is a bit less revealing than her previous uniform). This new direction represents yet another dramatic change in direction for DC’s female characters, following some great new teams on Catwoman and Batgirl and a new kid-friendlier mystery story in Gotham Academy. Hopefully this represents a continued move toward diversity in tone for DC Comics as the evolution of the New 52 continues. This first arc will be five issues prior to the Convergence event, so it’s the perfect length to give readers a chance to see how the new story will be going forward. And with such an easy entry point, there’s no reason not to give this a chance. 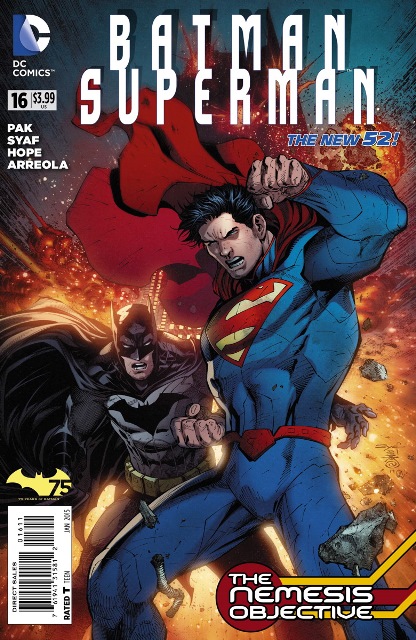 New artist Ardian Syaf joins the hit series as a mystery begins! An unseen terror launches deadly strikes against major cities…and the only clue is Kryptonite! Can Batman and Superman bring an invisible foe to justice before more damage is done?

Picked because: Batman/Superman is one of those books DC has that just allows for fun superheroics without worrying so much about the heavy hand of continuity. Yes, these stories take place within the New 52, but they rarely mention things from other titles or use them as story points. It’s all about telling a good story in the here and now. Greg Pak has been doing a killer job on Action Comics, but it’s this title that lets him cut loose. Getting Ardian Syaf as the new ongoing artist for the book is a great pickup, too. While the book started with Jae Lee and even had an arc with Brett Booth, Ardian is so much more suited to this style of storytelling. And Pak has been teasing for months that Superman was getting a new villain who would become “his Joker.” That story starts here! And it looks to be starting in fairly brutal fashion. Superman has a strong rogues gallery, but it’s never been one of the most widely popular in comics like Batman’s or Spider-Man’s. Expanding on that is a good idea and Pak’s recent stories with Big Blue show that he has a good handle on him as a character. If anybody could create a new villain for Superman that could become the next big thing for him, it’s Pak. Since these stories are all contained to five or six issues, this is the point anyone could jump into this story with only a passing knowledge of either character and be able to have fun with it. 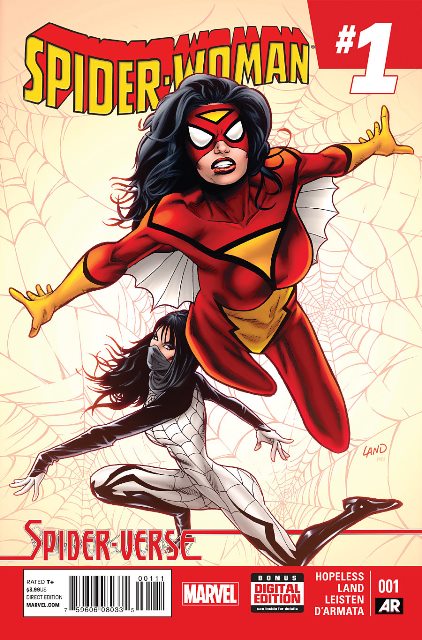 New Ongoing Series/Spider-Verse Tie-In! Jessica Drew has been an agent of S.H.I.E.L.D., and agent of S.W.O.R.D., an Avenger and so much more. But nothing could prepare her for the multidimensional insanity that is Spider-Verse! A war is brewing, and every spider-character in the multiverse is a target! But being a target is something Jessica Drew just won’t abide. She’s a woman with a mission and with Silk, the newest spider-character on the block at her side; she’ll have to put all her training to the test if she wants to make it out of Spider-Verse alive!

Picked because: Jessica Drew has had a few ongoing series in the past, but most of them failed to really catch on. Dennis Hopeless and Greg Land might be able to change that, though, with a take on the character that ties her more closely to the Spider-Man family of titles. In fact, if you’re reading Spider-Verse, this is a direct tie-in to that story and even features popular new character Silk. Starting a new book in the midst of an event can be tricky, but Hopeless has some experience juggling big stories with multiple big-name characters. Greg Land’s cover has garnered some controversy since the title was announced, but it looks as though the interior pages are more in keeping with expectations and that the story is focusing on making JD and Silk a solid superhero duo. Silk is getting her own ongoing series next year, but here she’s going to learn how to play sidekick first. And that she’s jumping in with the Marvel 616 Spider-Woman isn’t such a bad gig to start with, really. Oh, and they ride dinosaurs in the first issue. How can that not turn out to be fun?!? 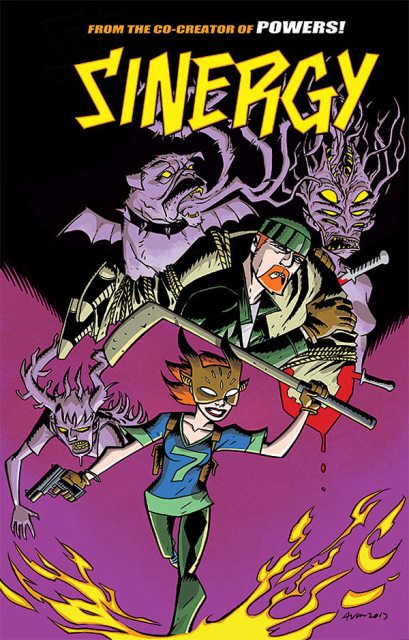 Jess was on her way to college with an athletic scholarship—until her first sexual experience enabled her to see inter-dimensional monsters who live secretly among us and feed on SINERGY (energies emitted by sin)!

Oh, and did we mention that her boyfriend is one of them and that her father wants her to start hunting these monsters with him?

Picked because: Mix one part Supernatural with one part Sex Criminals with a dash of superhero and you’ve got the next fun mature-readers indie book at Image Comics. It may seem a crowded lot to be in these days, but if there’s one thing for sure it’s Image’s ability to turn out entertaining concepts. This one is all sorts of tongue-in-cheek with a lighter touch art that looks like it could fit right in with the Archie Comics house style. This is another example of a new book for those curious about comics to try out. There’s no history or continuity to speak of since this is where this story begins. And with some witty, sarcastic dialog and a fun adventure feel, this book should make quite a few fans relatively quickly. If you’re into adult cartoons, this is probably the main book you need to pick up this week.