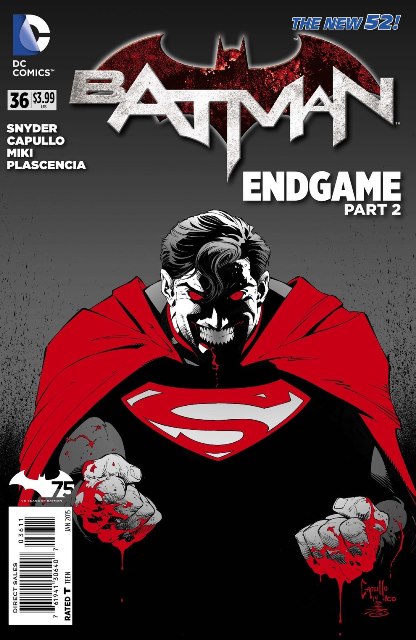 “Endgame,” part 2 – it’s a story arc so steeped in mystery, all we can tell you is the title!

Picked because: Dropping bombshells is something Batman fans should be used to Scott Snyder and Greg Capullo doing by now. How about a Joker mind-controlled Justice League hell-bent on Batman’s destruction? That’ll do! Endgame is starting off on this big, bombastic foot that shows Snyder and Capullo know just as much about big superhero fights as they do about suspense thrillers. The last time we saw Joker, he was all about trying to make Batman stronger by revealing his weaknesses. This time, it’s all about breaking the Bat. But there’s more than just that, Joker has his own sub-plan taking shape in the backup stories that depict five escaped Arkham inmates all telling their individual Joker first-meeting stories. It’s creepy, exciting and easily some of the best work this creative team has done yet. There’s still a good swath of mystery left here, too, as we still don’t know the ins and outs of how Joker is pulling this off. We don’t know what his ultimate plan is, either. We’re left with a lot of questions to be answered yet and that’s all part of the fun of Snyder’s writing. You never know what’s coming around the next corner. If you missed part one, make sure you get it first and remember that this all takes place after Batman Eternal ends. This is a new status quo for Batman and Gotham City. Craziness is going to ensue, get ready for a wild ride! And that the price tag was reduced back to $3.99 makes it a lot nicer, too. 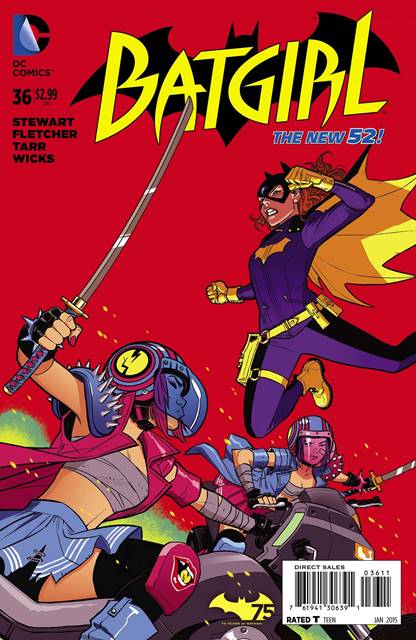 Batgirl’s new life is off to a rousing start when her first day of graduate school is interrupted – by twin sister assassins on motorcycles!

Picked because: The first issue from this new creative team was certainly divisive, but I felt it was one of the more interesting and entertaining changeups DC Comics has attempted yet. And now the story is going to move forward at a faster pace this issue as we’re not all fairly familiar with Batgirl’s new setting. She’s back in school pursuing her Master’s Degree and dealing with the loss of her original Batgirl gear and trying to make do without financial backing or many (superhero) friends left to watch her back. She’s got the usual college struggles and it’s made her life that much more entertaining and complicated. Fletcher and Stewart are taking things in a much different direction from where Gail Simone had been, but that’s turning out to be pretty entertaining so far. And Tarr’s art is loads of fun while also highlighting Batgirl’s strongest asset: her incredible mind. Last issue featured this great double-page spread of Barbara replaying events in her head with photographic precision. If Tarr keeps giving us stuff like that, she’s in for a long run on this book. Not to mention her ability to make knees to the face look so satisfying. While it might not be for everybody, this is a great starting point for those who wanted a lighter take on the character without losing some of the edge that made the previous series so great. 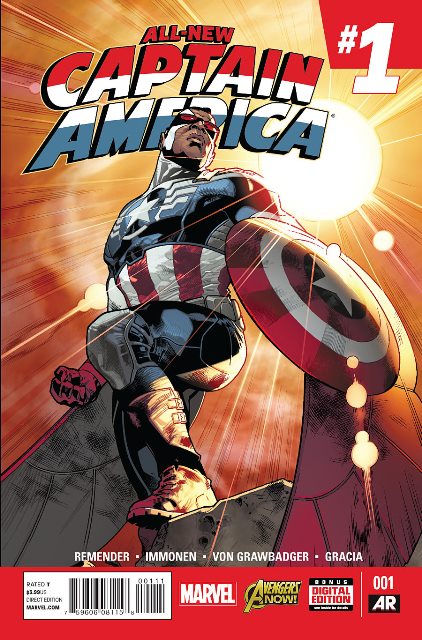 Art and cover by Stuart Immonen
$3.99

Picked because: After losing his super soldier abilities and aging incredibly fast, Steve Rogers has passed the shield and mantle of Captain America to his long-time friend Sam Wilson, aka The Falcon. Now, those of us who weren’t so keen on the whole Dimension Z thing from Remender’s previous story are getting a spy adventure with Sam Wilson at the forefront and the incredible Stuart Immonen (All-New X-Men) on pencils. The action is going to be fast-paced and the story is giving new readers a chance to jump into the story without worrying so much about the previous arcs. This does have ties to the current Avengers & X-Men event, AXIS, but it shouldn’t trouble new or old readers too much. This is meant to be a new beginning and it shows. Hopefully the sci-fi element gets toned down a lot for this new story and the spy/espionage angle gets a strong shot in the arm. With Hydra being the main villain and an emphasis on playing up film and TV connections, I think we’re all in for a much better Captain America story this time around and something that will be more accessible to more casual audiences, as well. 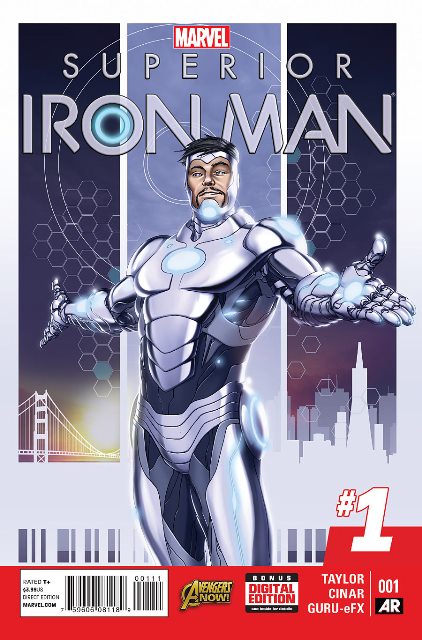 Picked because: Tom Taylor jumps to a new Marvel ongoing with an “inverted” Tony Stark? Sounds like a brilliant idea! Taylor has made quite an impression in a short amount of time with his work at DC Comics on the digital-first title Injustice: Gods Among Us and the monthly New 52 book, Earth 2. He’s shown a knack for writing characters who aren’t quite as good as they seem on the surface. With Iron Man’s attitude now adjusted to be more self-indulgent after the events of AXIS, it looks like Taylor’s going to be walking into a sandbox full of new toys. And he’s got Daredevil making a guest appearance, too. Word is, there’s going to be a major change to The Man Without Fear in this issue, too. That could have reverberating effects through his own title, as well. And, of course, he’s bringing another DC alum in Yildiray Cinar. His work on Supergirl was among the best of the New 52 in its initial launch and he’s one of the best at kinetic action scenes. And you can expect plenty of that from this book. When you have a story starting off with Iron Man unleashing Extremis onto the world because he thinks he can control it and give everybody what they want, you know things are bound to go wrong. But it’s going to look so amazing as it happens. This is a strong week for Marvel! 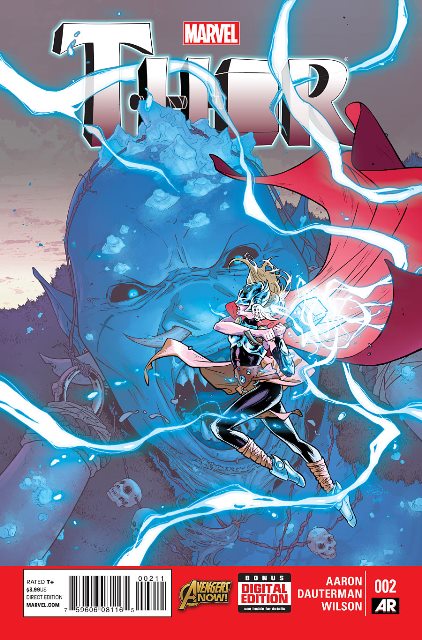 Picked because: Was there ever any doubt this title was going to continue to be awesome?!? If so, you haven’t been paying attention. Jason Aaron gave us a great first issue for his new arc and the action gets turned way up for issue #2 and the first full appearance of the new Thor. And it looks like she’s got a bit of dual personality going on with her real self being masked by the power of Thor coming from the hammer. It’s a crazy development that just keeps making this one of the best books Marvel has in its publishing line. Add to that the vivid pencils of Russell Dauterman and you’ve got a book that continues the tradition of God of Thunder. In other words: this is must-buy comics! If you were reading the previous Thor series, then you’ll recognize all the major plot threads from that title coming to fruition quickly here as Frost Giants have invaded Earth and Malekith has returned and taken Thor Odinson’s arm! And there’s still the subplot with Roxxon, who is on the receiving end of this new Frost Giant attack. There are several mysteries taking place at once here and this story is growing more epic with each new issue. Don’t miss out on the first real adventure of the new Goddess of Thunder! 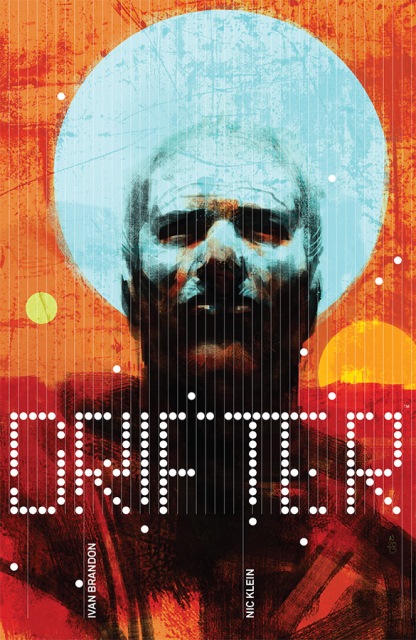 FROM THE CREATORS OF VIKING: Writer IVAN BRANDON (Wolverine, Men of War) and artist NIC KLEIN (Captain America, Thor) reunite to bring you a sci-fi ONGOING SERIES joining the dark revenge themes of Unforgiven with the mind-bending sci-fi universe-building of Dune.

In its frantic rush to survive itself, mankind has spread across the universe, colonizing and strip-mining countless planets. Abram Pollux barely survives a crash landing on Ouro, a lawless backwater world where life is cheap. What starts as a struggle for survival quickly becomes a journey to the very edges of what it means to be human.

Picked because: Comics have been awash with good sci-fi lately, much of it coming from Image. Saga and Copperhead are probably the best in that category, but when you talk about mixing Dune with Unforgiven, you’ve got potential for something that could easily standout among competition like that. And make no mistake, just because these are all Image titles, doesn’t mean they aren’t competing for your dollars. Each title in the sci-fi genre is going to appeal to a different taste, of course, but all are worth trying out for at least one or two issues. This creative team have had some success in the past and this first issue looks to kick things off with a high level of intensity. That’s how you get somebody’s attention, for sure. If they can hold it will be up to the reader, but it certainly has a familiar and welcome flavor. As I read through some of the preview pages, I got a sort of “Enemy Mine” feel from it, too. Fans of that old 1980’s sci-fi classic will probably get a similar sense as they peruse the first issue. It’s a nice call back that may not last, but it was nice to think the creators have a real affinity for the classics. 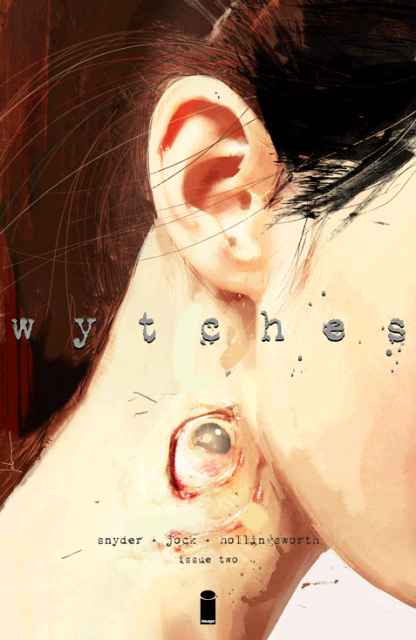 A busload of children disappears in the woods. A strange bite grows on a girl’s neck. And the wytches are getting closer, creeping from the woods. Be there for the terrifying second chapter of the new smash hit, WYTCHES.

Picked because: This is the book that’s going to leave you with nightmares this fall! Issue #1 got under my skin, in more ways than one. It’s this great story of a family haunted by a past they don’t understand, but that is slowly creeping up on their daughter. There’s something terrible in the woods and its making its making its way into the lives of everyone around. But the question remains: what does it want with the young girl it seems to be stalking? It could easily have killed her or taken her several times over by now, even taking others right in front of her. Something else is happening here and the horrifying imagery of Jock, as only he could deliver, will stick with you long after the issue is over. Scott Snyder is a master storyteller and easily the best comic writer of this generation. This title reinforces the idea that there is nobody out there who better understands what frightens us as people. Don’t read it in the dark! Or better yet, totally read this in the dark.