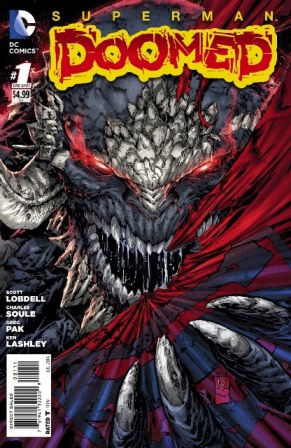 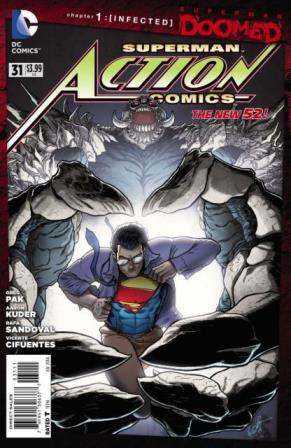 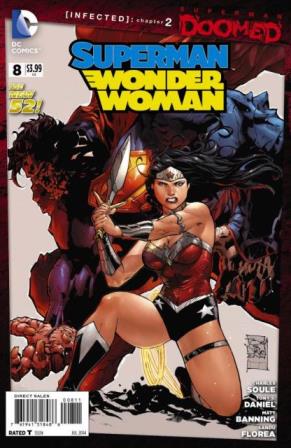 Doomed: Beginning the super-event you have been waiting for in The New 52: Superman vs. Doomsday in a way you’ve never seen before! And with Doomsday’s deadly new abilities, in this battle there can be no winners. The Man of Steel must unleash insane levels of power in order to do the job, only to terrify the world he’s saving. Beating Doomsday is only the beginning of this never ending battle!

Action Comics: The SUPERMAN: DOOMED epic continues! Superman barely survived his battle with Doomsday and now realizes that his wounds are not healing. Not only that, but he’s suffering disturbing physical and emotional side effects. He is changing…and the newly enlisted Men of S.T.E.E.L. – Metallo, Ghost Soldier, Atomic Skull and Steel – are about to find out into what!

Superman/Wonder Woman: Continued from this month’s SUPERMAN: DOOMED #1! Wonder Woman must deal with what Superman is becoming. Will she have to slay her lover to save him?

Picked because: Superman’s biggest physical threat ever comes roaring into the New 52 in all its rage-filled glory with this big crossover event. Superman’s post-Forever Evil status quo is going to be vastly different from what most fans might be used to (Lex Luthor is in the Justice League?!?) but that’s only going to add to the intrigue. But Doomsday isn’t just a hulking, unstoppable monster this time. He’s that, too, but he also carries something that only seems to affect Kryptonians. Superman hasn’t faced anything like this in the New 52, so it’ll be a massive obstacle for him and the world, as he is on the outs with the Justice League. Though, come on, they’ll help if he’s down and out. He’s still dating Wonder Woman, after all. But it’s what happens to him after the battle that’s most intriguing. The one-shot kicks things off, but readers don’t need to miss the next parts of the story in the other Superman books out this week. Action Comics #31 has Greg Pak writing Lana Lang again, so that’s must-read comics by itself. Then there’s Charles Soule and Tony Daniel back to business on Superman/Wonder Woman #8. If there’s a dynamic duo in Superman comics today, it’s those two. Crossover events can be a trifling thing for comic fans, but this might be one for the ages. And with a writing team that includes both Soule and Pak with art from Ken Lashley, Aaron Kuder and Tony Daniel, there’s no way it winds up being anything below fun. Get all three if you’re planning to read it at all. Skipping around might not be the best option.

Art and cover by Mike McKone

In Canada, the team of Animal Man, Green Arrow, Martian Manhunter and Stargirl is joined by Adam Strange to fight an unstoppable forced called the Unimaginable.

Picked because: Opening with Lobo vs. Hawkman is exactly the right foot to start off on and Jeff Lemire knows it. The team isn’t fully assembled yet and seems the book seems to be going for an “organic” coming together of the members rather than, say, how the JLA or JLI was assembled. This is a group of heroes, some who knew each other before, coming together for a common cause. Oh, and Adam Strange is in the mix along with a heavy dose of DC’s extended cosmic universe! Mike McKone’s art captures the more fantastical elements of the story well, but he also knows how to ground things when they need to be. That should serve the series well when it moves back to Earth and establishes the new team’s home base in Canada. And if this issue gives us even more Buddy Baker/Oliver Queen banter, we’ll all be the better for it. We should also expect to get an even closer look at the new teenage superhero, Equinox here. She displayed some interesting and terrifying powers in issue #0 and it still hasn’t been revealed exactly how she got these abilities, yet. It could tie into her Cree background, which Lemire has teased in interviews before. This is quickly becoming one of the best team books out there.

The son of Superman returns to the present day DC Universe to shape the world into a metahuman-free society. With blood on his hands and murder in his heart, Superboy begins a plan to cure his own genetic disorder and change the future he was born into.

Picked because: Aaron Kuder has already proven himself quite the Super-artist on Action Comics, but apparently he’s not too bad a writer, either. During last year’s Villains Month, he wrote and illustrated a Parasite one-shot that actually made the title character interesting, possibly for the first time in his existence (to this reviewer, anyway). That was no easy task and now he’s bringing those skills to a title that’s been in sore need of a reboot since…well…its reboot. The concept of a parallel universe version of Superman and Lois Lane’s son, John Lane Kent, being evil and wanting to kill all superheroes due to his being raised by a madman named Harvest might sound terrible (and it is), but Kuder has found a way to put the character on a path to possible redemption by bringing him into a time before a supposed conflict with super people destroyed the world. Now, Kent is seeing that there are good heroes who genuinely want to help him and the world. It flies in the face of everything Harvest told him and his internal conflict is starting to rise up as much as the genetic disease that’s killing him. Yep, he’s dying and how he faces that end is what makes this story all the more interesting. Instead of being mad, he’s actually finding happiness. Surprisingly enough, he’s seeing the world almost through new eyes because it’s about to be all over for him. Kuder might not have been given the green light to hit the reset button, but he’s clearly getting as close to that as he can in order to make this character a hero again. If he can make Parasite interesting (he’s also in this issue!), then maybe he can pull this off, too. 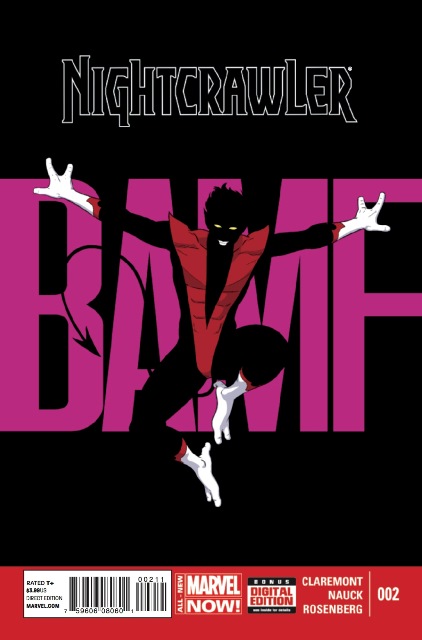 • Someone is hunting down Nightcrawler’s loved ones…and Nightcrawler and Wolverine are determined to find out who and to what ends!

Picked because: Last issue was quite a ride and one of the best of the month. That’s largely thanks to Chris Claremont’s spot-on characterization of the title character and certain members of the supporting cast (ahem, Wolverine). This month, the plot begins to thicken as Claremont delves into the giant battle suit that attacked him and his one-time girlfriend. Claremont is crafting a mystery here that speaks to some of the strengths he showed during his time on X-Men and while working with Frank Miller on their now-classic Wolverine story. However, this one doesn’t get quite as dark and gritty as that story did. That just wouldn’t play to the character of Nightcrawler/Kurt Wagner and if anybody knows that, it’s Claremont. This one is delving into the fuzzy blue elf’s past and giving new readers a chance to get to know him and for old fans (like me!) a chance to get to know him all over again. Todd Nauck’s pencils bring the fast-paced, yet lighter edge this type of story all but demands in order to keep the fun level at a maximum. His style is reminiscent of Ed McGuinness and Scott Kolins without blatantly ripping off either. But fans of either should find his work exciting and enjoyable. It’s a perfect fit for this series, anyway. It’s safe to say Kurt is in good hands all around.

• A post-nuclear warhead has gone missing in the Middle East. Eighteen S.H.I.E.L.D. agents are dead. Who you gonna call?

• While Phil Coulson struggles with his new problem, Maria Hill deals with her old one: MODOK is up to something.

Picked because: It might seem a little early in a book’s run to start talking about a new-reader jump-on point, but this actually is one. The first story was a nice two-part piece to introduce the new team/concept, but this is where the rubber actually meets the road. Ales Kot has some experience in the area of writing espionage titles, but he’s no stranger to bringing plenty of humor to the table, too. His first two issues struck exactly the tone that the Agents of S.H.I.E.L.D. TV show should have all along. The team dynamic is fun, kinetic and never leaves readers wanting to skip panels to get to the good part. Michael Walsh sets this book apart from typical spy titles (like the superb Black Widow) by giving it a more animated feel and allowing the characters to breathe and show off actual personalities. His layouts have a classic touch to them, but when the action scenes hit he goes for the wide shot and plenty of expressiveness on his characters faces. If you’re into the spy/thriller/comedies, this book is definitely for you and this would be a good place to start if you haven’t yet. With all the intrigue around who tried to kill Maria Hill and who’s targeting S.H.I.E.L.D., there’s lots of fun to come…now if they can just get Hawkeye to play well with others…and keep the others from killing him first.

Art and cover by Leonard Kirk

“THE FALL OF THE FANTASTIC FOUR” PART 4

• FLAME OFF!!! JOHNNY STORM has lost his powers! • The HUMAN TORCH is no more!!!

• With one member down, a new threat emerges — the WRECKING CREW…with powers mysteriously elevated to A-level destruction as they team-up with the WIZARD to be a new, devastating version of the FRIGHTFUL FOUR!

• And as BEN and ALICIA’S romance rekindles, so looms the PUPPET MASTER with dark plans for both of them.

• All this and the return of FF members ANT MAN, MS. THING and SHE-HULK.

Picked because: James Robinson may have done what some would consider impossible: he made The Fantastic Four into one of Marvel’s best books again. It might seem a little on-the-nose to kick off your opening arc with the title “The Fall of The Fantastic Four,” but that hasn’t made it any less gripping and fun to read. Johnny Storm losing his powers might not sound like anything all that new, but the way he’s handling it is surprisingly level-headed. And that’s what makes this story stand out above all the other FF stories I’ve read. Johnny doesn’t seem to fly off the handle or fall into his typical tropes. He’s actually…keeping his cool? Of course, he’s only just now been presented with a time when he might need his powers with the appearance of this new Wrecking Crew, so it’s still a wait-and-see. There’s a lot of high-concept stuff that dates back to Heroes Reborn and to Johnny’s recent return from the dead, but Robinson’s crafting never makes that feel too overwhelming for readers who might have skipped that bit (raises hand). Leonard Kirk is a beast on this book, too! His action scenes make the Fantastic Four’s abilities look really cool. That’s not such an easy task when dealing with Marvel’s oldest family team.  It might seem odd to jump on at this point, being sort of in the middle of the story arc, but think of it as a chance to also pick up the first three issues. This is a rare moment when the Fantastic Four have a title that’s not to be missed. So, you know, don’t.