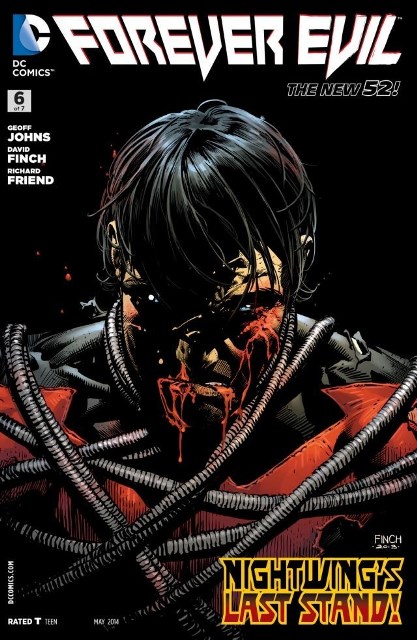 The final fate of Nightwing! The most unlikely of allies have set the Crime Syndicate in their sights — and they’re playing for keeps while the life of a hero hangs in the balance! Plus, the identity of the mysterious man in the hood is finally revealed!

Picked because: It’s all been leading to this. Will Nightwing survive or is this the end of Richard Grayson? There was a time, back during Infinite Crisis, that certain DC upper management wanted to kill off the original Robin, but some last-minute changes allowed him to survive. Now, it seems, the clock may have finally run out. There’s also the mystery of who’s the hooded man the Crime Syndicate brought with them from Earth 3. Some have posited that it’s Alexander Luthor, a sentiment that seems most likely. Still, there’s another theory floating out there that Booster Gold is the one under the hood. Possible? Sure. At this point, almost anything is. This issue is where the answers finally come together and we find out for sure what becomes of Richard Grayson and, likely, who’s under the hood. At the end of issue #5, whatever destroyed Earth 3 finally made its way to the New 52 Earth so the major battle of this series is nigh. It’s time for the Justice League to come back! 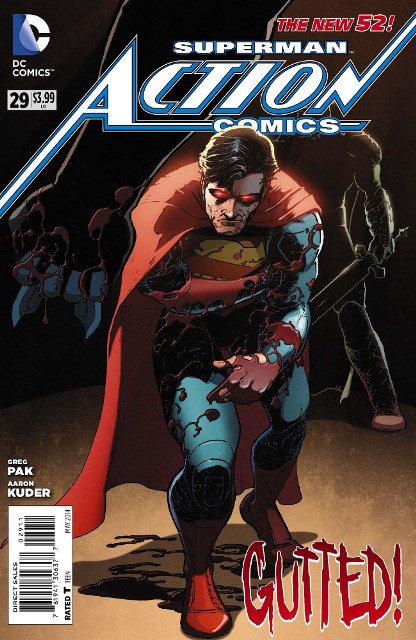 Superman must protect the sub-terrans from Ghost Soldier and the U.S. Armed Forces! Is he about to become Public Enemy #1?

Picked because: This is the single best Superman book on the shelf right now. Issue #28 had as many thrilling moments as it did LOL’s. Not to mention the incredible amount of character development that has continued for just about the entire cast. Lana Lang has never been written better. Some big things were revealed last issue and just when you think you’ve got a handle on Ghost Soldier, Greg Pak throws you for a loop. Aaron Kuder’s art is very different from all the other Superman titles today, but he’s settled into a strong rhythm now and each issue gets better and better. And as much fun as the action scenes are, it’s the flashbacks and small character moments that make this such a brilliant title. Several people have attempted to tell Superman stories in the New 52, but few have truly succeeded. The only thing to call this title right now is successful. This is the final chapter of this creative team’s opening arc and it stands to be just as much fun as every other issue has been. 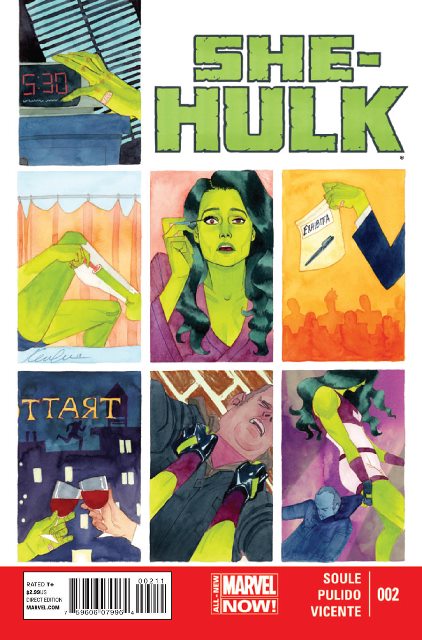 • Jennifer opens her own practice, but things aren’t going as smoothly as she’d like.

• A new client rides into town…but is he hero or villain?

Picked because: Charles Soule continues his streak of launching great books. Typically, superhero books concentrate more on action and not so much on building characters in their first issues. She-Hulk is the exception that absolutely disproves that rule. This is easily the smartest book Marvel is publishing today. Despite the first issue being so dialog-heavy, it never felt slow or boring. The story moved at a brisk pace and, despite being full of professional legal jargon, never talked over the audience’s head. However, that doesn’t mean some things don’t get Hulk-smashed real good at some point. It wouldn’t be a She-Hulk book, otherwise. Tony Stark’s lawyers are probably lucky it was just a few robots that caught her wrath. Now that she’s moved into her own private practice after winning a huge case this story is poised to take off and develop quickly. Javier Pulido’s art is hugely expressive and focuses on getting the emotions and little nuances in those close-up moments. It’s perfect for the tone established in issue #1. Luckily for those who missed out on the first issue, this should still be jump-on friendly enough to accommodate them. Get on this book now while the ground floor is still accessible. 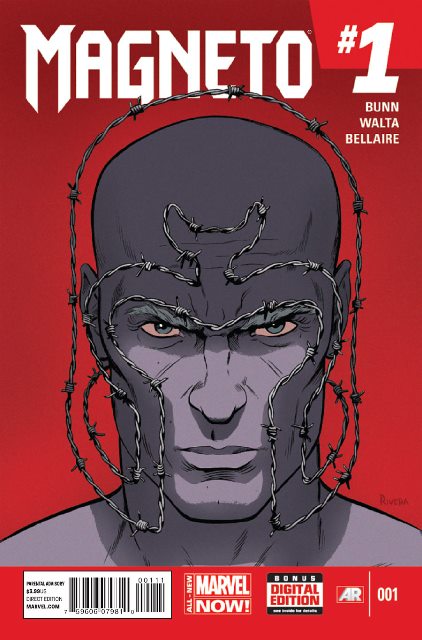 Once the deadliest, most feared mutant mastermind on the planet, MAGNETO is no longer the man he once was. After falling in with Cyclops and the X-Men, Erik Lehnsherr became just one more pawn in another man’s war. But now, determined to fight the war for mutantkind’s survival on his own terms, Magneto sets out to regain what he’s lost…and show the world exactly why it should tremble at the sound of his name. Magneto will safeguard the future of the mutant race by hunting down each and every threat that would see his kind extinguished—and bloody his hands that they may never be a threat again.

Picked because: Villain books can be tricky things to pull off. Lately, that seems to be a theme for writer Cullen Bunn. As this title begins he’s also gearing up to launch the Yellow Lantern patriarch’s first solo title, Sinestro, next month. Magneto has been a major part of Uncanny X-Men for a while now, so moving into a solo book is a logical step for the character. And, like some of Bunn’s recent books, this one is definitely not for kids. This is Magneto unleashed and doing some pretty brutal things with his abilities. Despite the people he’s going after being evil, it’s hard not to feel sorry for some of them, considering what’s coming. It’s going to be great to see him following his own path and being proactive to protect the future for all mutant kind. And when Magneto sets out to remind people why they should fear him, things are going to get bloody. The second phase of Marvel NOW! is turning out some of the company’s best books in years, so make sure you don’t miss this one. 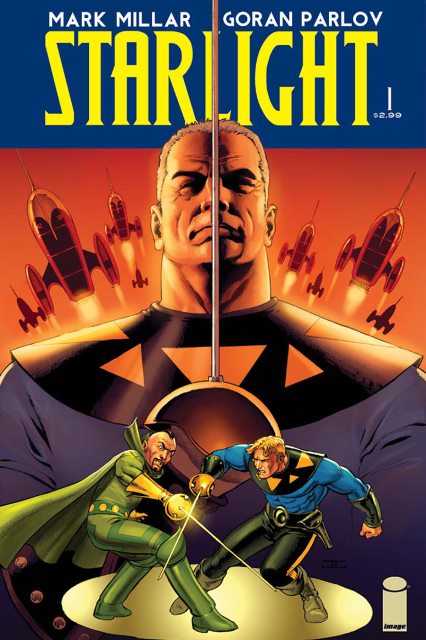 Forty years ago, Duke McQueen was the space hero who saved the universe. But then he came back home, got married, had kids, and grew old. Now his children have left and his wife has passed away, leaving him alone with nothing except his memories…until a call comes from a distant world asking him back for his final and greatest adventure. This issue launches the much-anticipated Millarworld Universe. Get in on the start of something MASSIVE!

Picked because: Mark Millar’s plan to establish his own universe takes a big step forward with this six-issue limited that he described as “Buzz Lightyear meets ‘Unforgiven.’” If you like stories like those in Flash Gordon and Star Wars, this will definitely be worth checking out. Big sci-fi fun is always welcomed and it’s been a great time for it in comics lately. And, even better, Millar is making this one a little more age-accessible than most of his other work. Don’t expect an all-ages title, but it’s not adults-only this time. Those who haven’t tried out Millar’s previous work should give this a look. He’s usually at his best when he’s telling stories set in worlds he’s established. This should be no less than his best work yet. 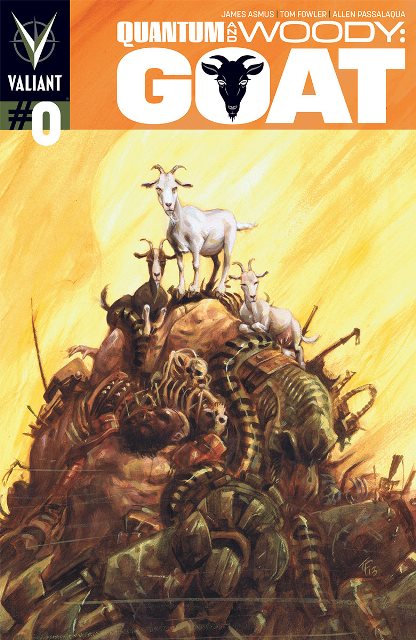 Tom Fowler returns to QUANTUM AND WOODY for the thrilling and tragic life story of…Vincent Van Goat! Behold! A hero is born! A hero rises! We’re gonna level with you—you’re going to need to read this issue! Excitement and laughs and all that! Major repercussions for Quantum and Woody! Yes, seriously! Buy the issue and then see if we weren’t kidding!

Picked because: The ridiculous is what makes comics fun and this should be some seriously ridiculous stuff. Vincent Van Goat has become a bit of a fan-favorite in Quantum & Woody so it was probably only a matter of time before we got an origin story for him. This is the kind of fun comics should have more often. In a climate where most titles have taken on an overly-serious or dark and gritty tone, Quantum & Woody has turned that on its head by never forgetting what kind of title it’s supposed to be: fun! If you’ve never tried the title before, this all might seem a bit strange, but for those who’ve been following since the beginning, this is not to be missed. Still, if you like comics with real out-there concepts, check this one out and then pick up the first Q&W trade. You won’t be sorry.