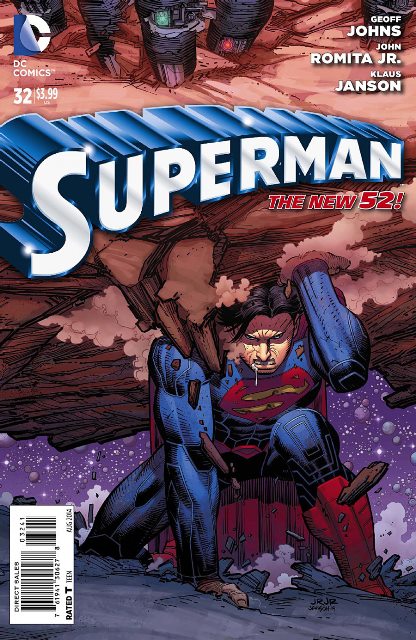 “THE MAN OF TOMORROW” chapter 1!

A NEW ERA for SUPERMAN begins as Geoff Johns takes the reigns – and he’s joined by the legendary super-talent of John Romita, Jr. in his first-ever work for DC Comics as they introduce Ulysses, the Man of Tomorrow, into the Man of Steel’s life. This strange visitor shares many of Kal-El’s experiences, including having been rocketed from a world with no future. Prepare yourself for a run full of new heroes, new villains and new mysteries! Plus, Perry White offers Clark a chance to return to The Daily Planet!

Picked because: Finally, Geoff Johns has come back to Superman! After nearly three years of the main Superman book ranging in quality from barely-readable to “I can’t believe this actually made it to print,” a true superstar team has come to elevate the Man of Steel to his proper heights. Johns hasn’t been on a regular Superman book for a long time and he’s never actually written the main title before, so this will be somewhat new for him, but it’s all-new territory for John Romita Jr. Romita spent the better part of his career as a Marvel exclusive and had some high-profile gigs ranging from a long stint on Amazing Spider-Man to working with Mark Millar on Kick-Ass. This is truly a historic moment for Romita, DC Comics and for us fans. The story is bringing as much of a classic feel as it is a modern context while also giving new readers a chance to get to know where the character is at this point without using too much exposition. Johns has always been one to allow his artists maximum room to be equal storytellers and, from what we’ve seen so far, that hasn’t changed. But Johns’ love for the supporting cast (Jimmy Olsen, Lois Lane, Perry White) is definitely going to come out in a big way, too. Action Comics and Superman/Wonder Woman have given Superman fans something to be happy about over the last few months, but this team could put the title on top of the sales chart for the first time in many, many years. The Man of Tomorrow, starts now! 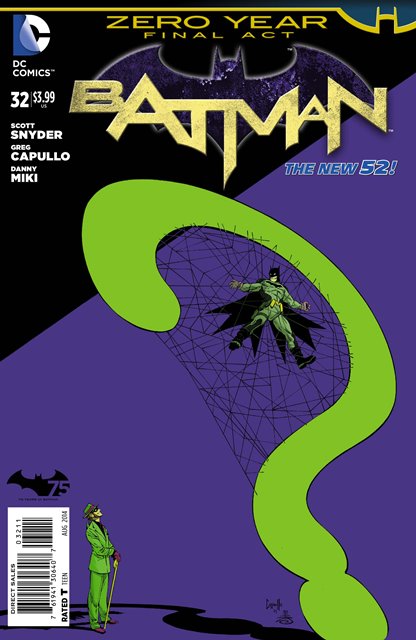 The penultimate issue of ZERO YEAR is here! Batman gets one step closer to the endgame with The Riddler as the final chapter of ZERO YEAR: SAVAGE CITY draws closer to its stunning finale!

Picked because: The battle for Gotham reaches its boiling point, but has Batman really solved Riddler’s puzzle? Not even close! Snyder and Capullo’s epic Zero Year has been raging on for a while now, exploring the deeper psychological meanings of what it is to be Batman along with giving us some really cool introductions to Batman’s rogues gallery. Last issue showed the dichotomy of how young Bruce Wayne and a young Batman approach a similar problem, but with vastly different stakes. This issue is exploring the moment when Batman truly becomes the hero Gotham needs and steps out from under the personal quest to becoming a larger ideal. Snyder has revealed a lot of history we were unaware of when the New 52 launched in 2011 with this story and the surprises aren’t over yet. Capullo’s pencils have been even more important to making this such an epic presentation as his action scenes and the brashness of a young Bruce Wayne inject large amounts of urgency and vigor into every panel. Since this team took over the main Batman title in 2011, it’s been something special. At this rate, it’s going to go down as one of the all-time best Batman runs ever. 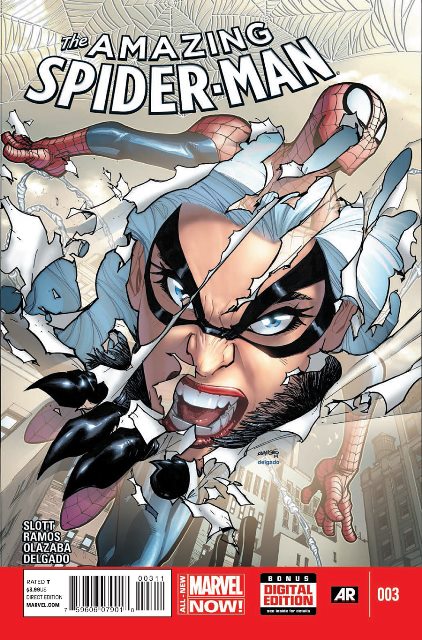 Art and cover by Humberto Ramos
$3.99

• Because of her last encounter with Spider-Man, Felicia Hardy lost everything. Now the Black Cat is back, and she doesn’t want any apologies or excuses… just REVENGE.

• Plus: Spidey teams up with a real hero, fireman Pedro Olivera… who just happens to be the current boyfriend to one Mary Jane Watson.

• And… more on you-know-who from the opening scene back in ASM #1. You know who we’re talking about. Yeah, that’s right. You better not miss this one!

Picked because: Bringing Peter Parker back from the “dead” was tricky business, but so far Dan Slott is pulling it off nicely. Having the jovial, quick-witted Spider-Man back in the mask makes it easy to see why he is so endearing to so many after a long stint with the ultra-serious “Superior” Spider-Man. Not to say that Superior Spider-Man wasn’t a great ride, but this is the way things should be. But with Peter’s life in a bit of upheaval thanks to Doc Ock’s time in his body, things are a bit out of sorts. And given the last encounter Black Cat remembers having with “Spider-Man,” this meeting isn’t likely to go so great. Peter’s also got Ock’s (his?) live-in girlfriend to deal with, but that situation seems to have been somewhat resolved and even turned out beneficial for them both. Save the heartbreak, of course. This title has turned into all sorts of fun again and that’s exactly the direction it’s needed to make it something readers want to buy every month. Don’t miss an issue of this, because it looks like Slott is just getting warmed up. 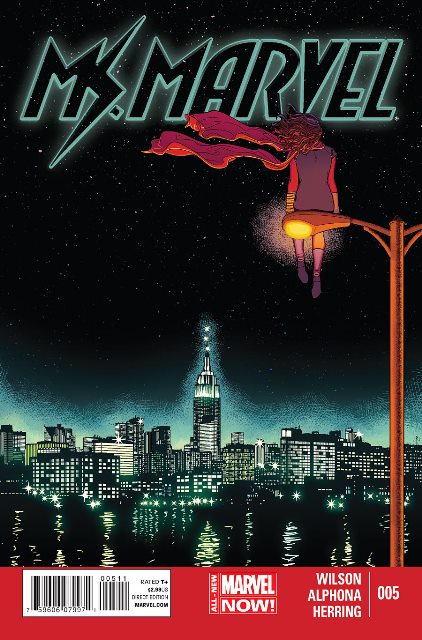 Art and cover by Adrian Alphona
$2.99

• How does a young girl from Jersey City become the next biggest super hero?

• Kamala has no idea either. But she’s comin’ for you, New York.

Picked because: Each issue of this title gets better and better! Kamala is finally taking on her first real threat and attempting to be a hero. It’s not likely to go so well, but it’ll be fun watching her learn as she goes. Wilson has found a voice for this young character that is just outstanding. She doesn’t feel forced or pandering. She’s legitimately fun to read and sounds like she’d fit perfectly in just about any group of awkward young teens today. This is the kind of fresh perspective superhero comics has needed for a long time. Somebody who doesn’t just do the same old thing and a hero who genuinely loves what she’s doing. She’s scared, sure, but who wouldn’t be in that situation? The point is, this is a book that’s a real page-turner and feels like it’s worth more than its cover price. That’s a rare thing in this day and age. It’s also nice that it’s a solo title that doesn’t require a bunch of follow-up. You can just read this book and not worry about the larger Marvel Universe. If you’ve been sleeping on this one, it’s time to wake up. This is the kind of book that deserves to be a massive break-out hit. 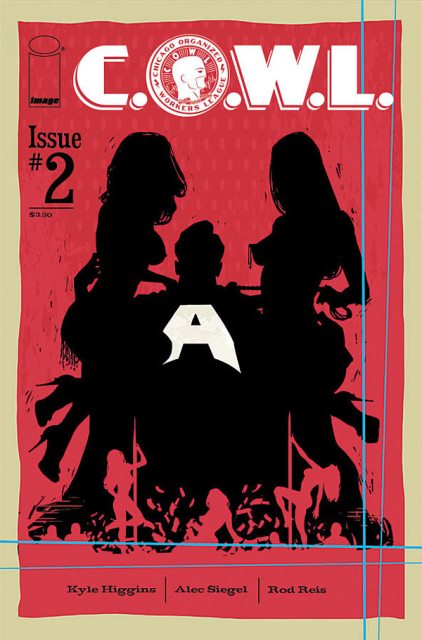 Moles, murder, and mayhem. As C.O.W.L. prepares to enter negotiations with the city, scandal threatens the organization. Can The Grey Raven keep C.O.W.L. from tearing itself apart? Plus, what really happened between him and Sparrow?

Picked because: Who would have thought that a story about unionized superheroes would turn out to be such an intriguing idea? Higgins has taken the idea and hit the ground running. The fun part here is the mystery behind what happened with Gray Raven and Sparrow all those years ago and what kind of dirt he’s keeping hidden away. There’s all sorts of things bubbling under the surface and the characters are just starting to find distinctive voices. It’s easy to see Higgins’ love for his home of Chicago and for Alan Moore’s Watchmen shining through. And Rod Reis’ art is as eye-catching as anything Image Comics is producing right now. It has a painted quality to it, but comes into sharp focus when there’s emphasis on eyes or action scenes. This is an example of how to introduce a new team book when the history of the characters isn’t already known by the readers. Add to that strong, believable dialog that flows smoothly and keeps you pulled into the story and you’ve got what could easily be becoming must-buy comics each month. If you love a good mystery/noir story, pick this up tomorrow. 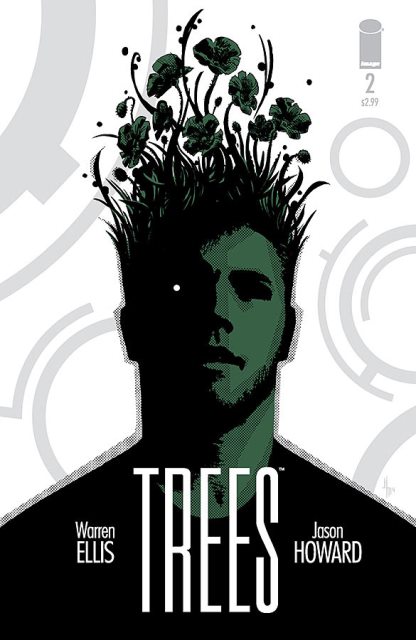 An Arctic research station. An Italian coastal town with an occult legacy. A new city in China. The future is being written in these places, in the shadow of a strange alien invasion that has become a historical mystery.

Picked because: After a stellar first issue, this title is already making serious waves. No less should be expected of Warren Ellis and Jason Howard. These two together nearly always produce what seems like magic. The groundwork was laid in the first issue, but it seems there are even more characters and history to be explored with the mysterious alien race who landed on Earth and…pretty much just made themselves at home. The “Trees” haven’t really even noticed humanity and humanity has yet to figure them out. But, life has certainly changed on Earth and definitely not for the better. It’s not quite a dystopian future, but it’s not far off. There are certainly places where that mentality has taken root (pun fully intended), but there are glimmers of hope, too. Ellis’ larger message (and you can bet there is one) hasn’t fully presented itself yet, but hints have been dropped. While the full scope of this isn’t known yet, it already has the feel of an important story that comics fans should be paying attention to. Make sure you grab issue #1, if you haven’t already. This is the beginning of something truly special.