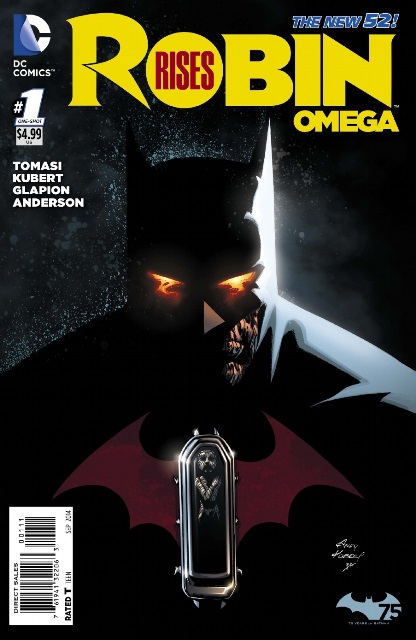 The hunt for Robin is over, and the battle joined! But Batman’s family feud with Ra’s al Ghul is about to erupt into something bigger when it’s interrupted by the forces of Apokolips! This epic story continues in this month’s BATMAN AND ROBIN #33!

Picked because: The Hunt For Robin had one amazingly crazy ending with the forces of Apokolips suddenly showing themselves and revealing they have some investment in these events, though that parts isn’t fully clear yet. Peter Tomasi’s efforts have made for some of the best storytelling in the Batman line all while adding an element of the fantastic and even the absurd to the otherwise mostly-grounded family of titles. The big question he’s been approaching is “does Batman really need a Robin?” and the answer isn’t so clear-cut. Batman certainly doesn’t want his son’s body being brought back to life, especially not to be used for Ra’s al Ghul’s purposes, but the heavier question is “has he moved on from trying to revive Damian?” This is the beginning of the story arc that will ultimately bring a new Robin into the fold, but who it will be is still a mystery. Damian could return, but the more likely scenario is a new Robin will take over the role. While this event kick-off issue is a little pricier than the Batman and Robin title (normally $2.99), the prospect of Andy Kubert drawing interiors to Tomasi’s story is likely to be worth the price of admission. This is also a good jump-on point for those who may have been missing the regular title, but were curious about expanding their Batman lineup. 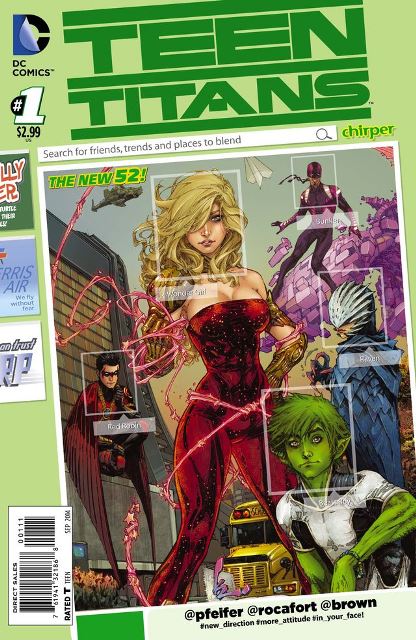 Teen Titans #1 – Written by Will Pfeifer

Art and cover by Kenneth Rocafort
$2.99

Red Robin, Wonder Girl, Raven, Bunker and Beast Boy step out of the shadows of the adult heroes of the DC Universe to offer bold, exciting and sometime dangerous ideas on how to protect a world full of superpowered teenagers – any one of whom could be the next heroic figure or major villain!

Picked because: So,  DC’s trying to launch this title again after a more-miss-than-hit volume from Scott Lobdell. Unfortunately for them, it’s already got controversy all over it for Kenneth Rocafort’s cover art. That may hurt its overall sales, but after seeing the interior pages and writing so far, this is already a significant step up from the previous volume. Will Pfeifer’s script feels much more fluid and natural than anything from the previous volume, though it would be nice to have the kids talking like…well…kids rather than trying to sound like adults in overly serious situations all the time. Luckily, from the covers and the tonal shift, it looks like there’s going to be a good bit of silliness that comes into play here as the title is attempting to embrace its absurd premise while maintaining a level of superheroics in keeping with the DC house style. And while Rocafort’s cover may have caused some controversy, it’s hard to be overly critical of his overall style, which stands out as some of the most creative and fun in the entire DC New 52 line. Now that he’s working with a writer who clearly sees the importance of letting the art move the story forward over tons of expositional dialog/thought bubbles/text boxes, this is already on a much better track. Is it the step the Teen Titans need to become a best-selling book again? Maybe, maybe not. What is apparent is that DC wants the title to be better than it was and a change in writing/direction was obviously the first step to that. However, given all the controversy that’s happened (and more likely to come), this may only be a first step in the process. 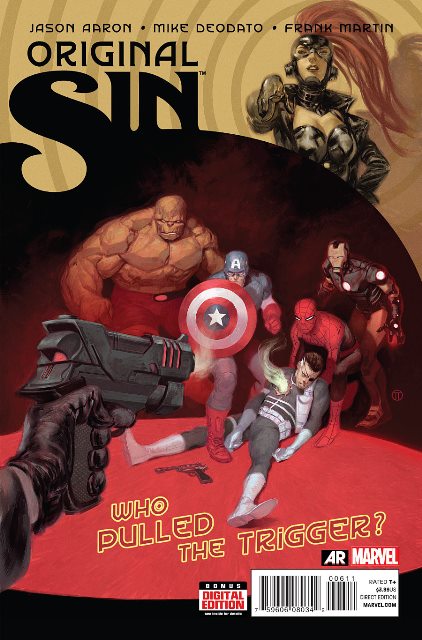 From the very beginning, fans have waited, wondered and speculated who was responsible for Uatu’s untimely death. Now, Jason Aaron and Mike Deodato peel back the curtain on the person pulling the strings as Original Sin races toward it’s heart-stopping conclusion.

Though the Watcher’s killer stands revealed, the knowledge Uatu kept cannot be put back in its bottle. The heroes’ most closely guarded secrets are now weapons in the hands of a terrifying enemy.

Picked because: This series hasn’t been short on intrigue and action intermixed with some nice (albeit subtle) tongue-in-cheek humor. We’re finally going to find out who’s been behind it all and what their motivations are for revealing all the major secrets of the Marvel Universe. From the revelation of a Tenth Realm to a whole bunch of Nick Fury’s running around, this has been one seriously crazy ride. Jason Aaron’s focus on making sure the story focused on character development rather than seeing how many things he could blow up per issues has only served this title for the better. And Mike Deodato’s art is some of the best he’s ever turned in. While Aaron’s dialog and story structure have made this one a much better-than-normal event for Marvel, it’s Deodato’s pencils that have truly driven things forward. It’s the little details that stick out and lay the clues on the table for readers to figure out. This is one you’ll want to pay attention to as it’s going to map out the direction for the next year of Marvel stories. While there’s always lots of hyperbole surrounding these events (including this one), at least Aaron’s scripts and Deodato’s art have made it a much more fun read than the typical.

History is in the making in this epic finale to the acclaimed series LIFE WITH ARCHIE, as America’s most beloved character makes the ultimate sacrifice to save a friend. The unthinkable happens: Archie Andrews dies! Fans will experience an epic tale of Archie’s future sure to make headlines, generate discussion and stand as one of the most-talked about Archie stories of all time. Do not miss this game-changing tale of love, friendship and true heroism.

Picked because: Death is often a revolving door in comics and it’s not like this will be the last time we ever see Archie Andrews in a new comic, but for his main story this is the end. For the first time in the character’s 70-year history, he’s going to die. The story has already been spoiled a hundred times over that Archie is going to sacrifice himself to save Kevin Keller, his openly-gay veteran friend who’s advocating for better gun control in the wake of a shooting incident that nearly killed his husband. Archie is one of those characters who always tried to do the right thing and reminded us of the things that make America great. While the series has taken on a decidedly liberal tone in the last several years, it’s been to the book’s favor as the characters become much more diverse and the stories much deeper than they might have otherwise. Archie’s adventures are coming to a close and this will be a true milestone issue of any comic. The moment of Archie’s death is one that will resonate with fans for some years to come. This issue is the biggest moment the series has ever had and when issue #37 comes out, reflecting on Archie’s life through the eyes of his friends, it’s sure to bring lots of tears to those who love the iconic redhead. Excuse me…got something in my eye.