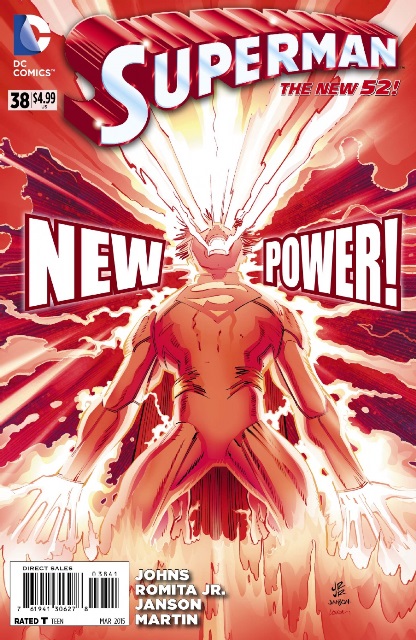 A new year brings a new power and a new look from the epic team of Geoff Johns, John Romita Jr. and Klaus Janson in the extra-sized conclusion of their first arc! The showdown between Superman and Ulysses will push the Man of Steel to new extremes – and Superman’s new look is revealed as Clark Kent tells his true identity to one of the cast. Plus a surprise guest-star!

Picked because: This is the issue where the big things finally happen and the payoff comes fully into play! We’ve already seen the new Superman suit and, while not much of a departure, it does add some visual elements that help to make it more aesthetically pleasing than the original. As for the new power…it’s hard to say. Ulysses has hinted at Superman being able to do more than he’s allowed himself to do at this point, but it’s anybody’s guess what that could mean. This opening arc has had a few bumps here and there, mostly due to certain events not being timed properly at DC, but it’s also been some of the best writing and characterizing of Superman and his supporting cast since the 2011 reboot. It’s almost like Johns has been trying to make the case for a Perry White ongoing. Big stuff is happening in this one so don’t miss it. 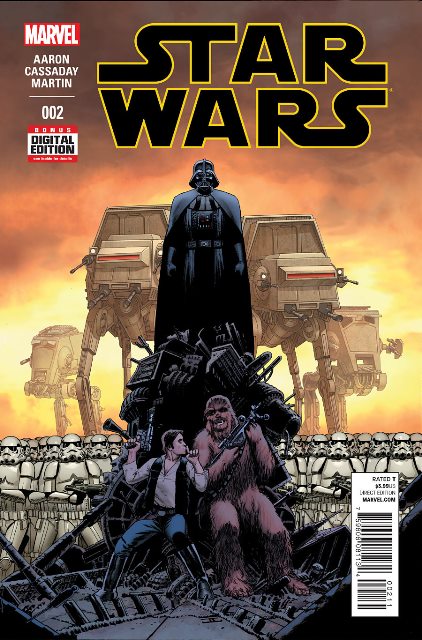 THE GREATEST SPACE ADVENTURE OF ALL TIME CONTINUES!

Picked because: If you loved the first issue or if you’re a fan of the original trilogy, you need this book in your life. Jason Aaron is a…force…to be reckoned with in modern comics and his love of Star Wars shines through every page. And we get a Luke vs. Vader battle in this one! It’s now part of the official Star Wars story (Disney owns Marvel and Star Wars, after all) so this might shed some light on Vader’s obsession with young Skywalker in The Empire Strikes Back. And who can possibly get enough Han and Chewie? This is one that will make old SW fans happy and might even get some younger converts excited, too. Perfect appetizer while we wait for Episode VII to come out December 18. 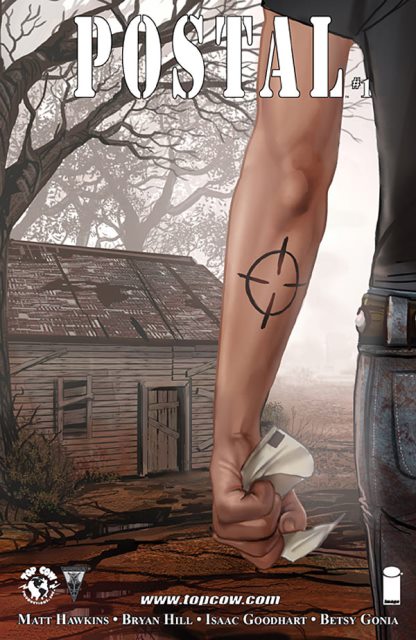 The townsfolk of Eden, Wyoming wake up to the first official murder the town has seen in 25 years. Their reaction to this isn’t normal, and there’s a reason for that. Eden operates as a haven for fugitive criminals who remain here while new identities, often including facial reconstruction, are created for them. There is zero tolerance for any illegal activity that might draw attention to the town and an “official murder” is the last thing they want. A single, tight-knit family runs Eden with the youngest oddball son Mark Shiffron overseeing the postal branch, the only means of shipping in or out of the city. THE FBI has repeatedly been foiled trying to insert an undercover here; they see Mark as the weak link to exploit. This murder gives them a new opportunity.

Picked because: There are very few comics out there that explore what it’s like to have a mental disability. Postal puts a form of autism front and center with its main character dealing with the effects of Asperger’s syndrome. Mark oversees the Post Office in an incredibly small town that clearly is intent on keeping any and all of its dark secrets. If you’ve been enjoying Jason Aaron’s Southern Bastards or you liked Preacher, this is a book you should check out this week. It’s presented as a very dark comedy with some action mixed in, too. It won’t be for the timid, but it will likely be a hit with everyone else. 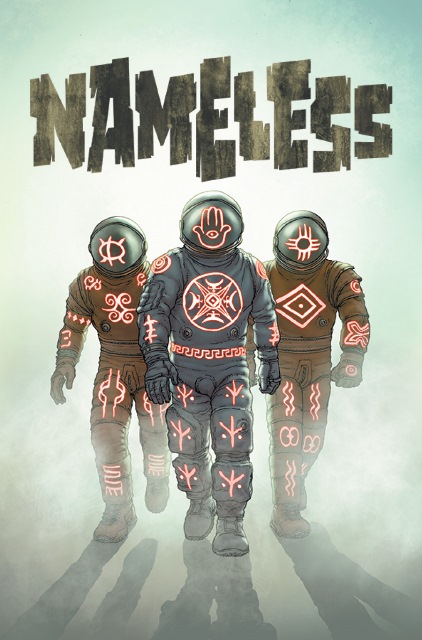 An astronomer kills his family, then himself, leaving a cryptic warning. A Veiled Lady hunts her victims through human nightmares. An occult hustler known only as ‘Nameless’ is recruited by a consortium of billionaire futurists for a desperate mission. And the malevolent asteroid Xibalba spins closer on a collision course with Earth. But nothing is what it seems—a terrifying inhuman experiment is about to begin. Abandon all hope and experience ultimate horror in NAMELESS.

Picked because: Grant Morrison and Chris Burnham together usually makes for interesting and sometimes great comics. Morrison has never really done horror before, so this will be an exciting experiment for both the creative team and us readers. So far, critics have been very kind to the book and it could be another solid hit for Morrison and Burnham. Morrison certainly works best when left to his own devices and not weighed down by years of continuity. The creator-owned environment of Image Comics and other smaller publishers seems like a perfect fit for him. And Burnham’s classic style will certainly help draw in new and long-time fans. Like Frank Quietly, his art has a broad appeal that speaks to young and old fans alike. Looks like Image has yet another winner on its hands.