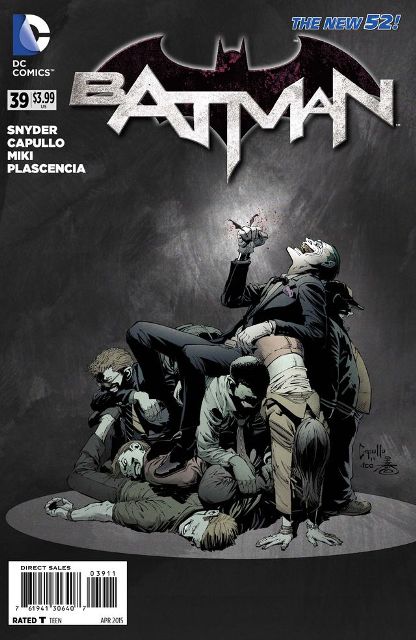 “Endgame” part 5. The Joker is back! The penultimate issue of the Clown Prince of Crime’s horrifying return! Plus, in the backup story, the inmates and Mahreen finally learn the truth about The Joker!

Picked because: After last issue’s shocking revelation about Joker, this chapter has all the makings of a true classic. Scott Snyder and Greg Capullo are bringing a real sense of finality to all of this (hence the title “Endgame”), but it’s more than that. This feels like they truly are closing out Batman as we know him. Where will The Dark Knight be left after this is all over? What’s in store for us in the final two chapters of this story (one more to go after this one!)? Has the Joker’s true origin been revealed or is it just more of his usual tricks? And is there any Batman villain Scott Snyder can’t turn into something menacing and/or creepy (see Crazy Quilt from last issue!)? Even if you’re not a DC fan, passing this book up for any comics fan just seems unfathomable. Especially now that we’re in the midst of the single greatest run on the character anyone has ever seen. 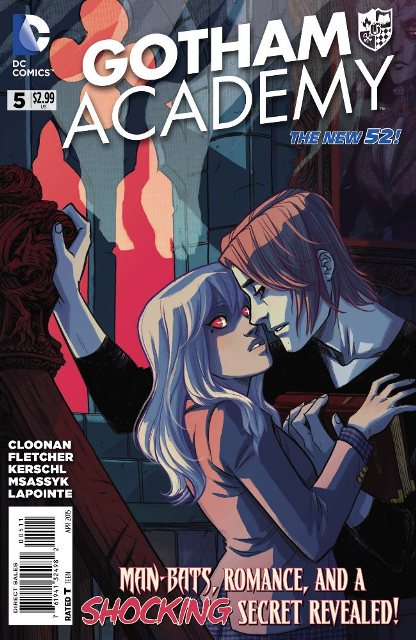 Picked because: As this title has developed it’s turned into a fun, intriguing mystery title. Is there something supernatural happening at Gotham Academy? Last issue put a big hole in that theory and showed that some of the kids are a little too gullible. That said, several of them are quite resourceful, too. Olive has finally started coming into her own as a take-charge kind of character and Maps is completely adorable. The revelations of last issue made this feel a lot more connected to the larger Batman family without going too far. It’s nice to have a title that’s essentially an all-ages book that doesn’t feel completely like an all-ages title. I admit, I had doubts about this title at first. It seemed like maybe I just wasn’t the target audience for it, and maybe I’m still not. But what I can say for certain is that I am entertained and have found myself trying to piece together the clues from each month. Not to mention the brilliantly stunning art of Karl Kerschl! This guy has to be a Top 10 artist working today, folks. Only one issue left in this first story arc (coming out next month!) and I can’t wait to see where it goes. 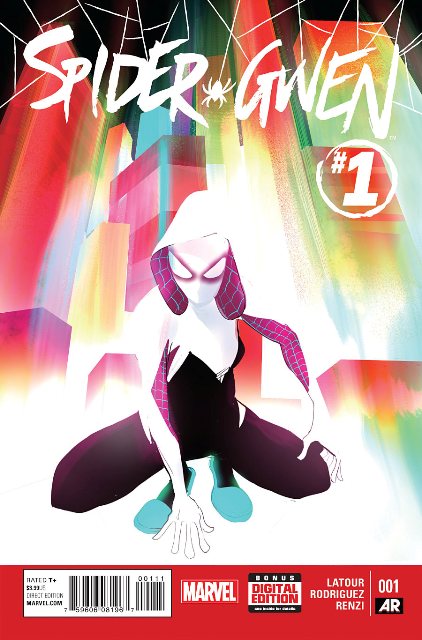 SPIDER-GWEN SPINS INTO HER OWN SERIES!

Picked because: It feels like we’ve been waiting forever for this to finally happen and here it is! Spider-Gwen is the major breakout star from Edge of Spider-Verse and possibly Marvel’s biggest surprise hit…ever! This is truly a case of fans making a book happen. When she first appeared in Edge of Spider-Verse #2, she and the universe she inhabited became instant hits with fans and they took to Twitter, Facebook, Instagram and the message boards to let Marvel know just how much they wanted a solo ongoing. Well, wish granted! This title has the added benefit of not being connected to any of the larger Marvel Universe. Hey, a Marvel book that likely won’t be affected at all by Secret Wars! And Gwen’s original creative team of Latour and Rodriguez are back to tell more of her story. Spider-Verse will only have a small mention at the start of this one, but from there this is its own world with its own versions of Marvel characters. Could this be the beginning of a new “Ultimate” universe? It doesn’t matter right now, really. This is the title fans demanded and now it’s time to get out there and support it! 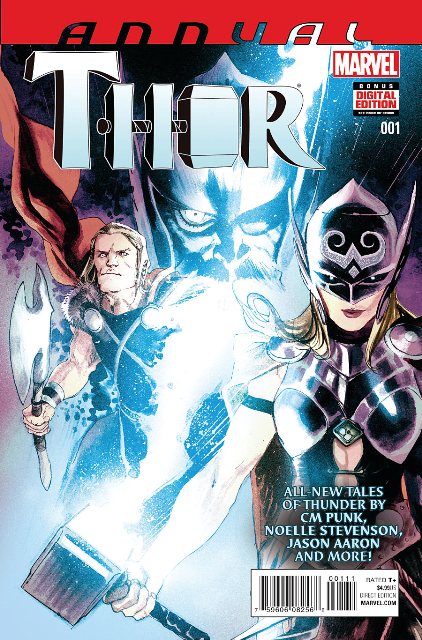 Picked because: It’s the writing debut of CM Punk! He may be done with WWE, but the creative force in Punk’s head is obviously still working and now he’s getting to try something completely different for him: writing the God of Thunder! That he’s paired with artist Rob Guillory (Chew) for his first outing is a sign that we should expect equal parts excitement and comedy. Oh, and Jason Aaron is writing King Thor again! Not to mention Noelle Stevenson giving us her version of the new Thor. This issue is stacked from top to bottom with incredible talent and all sorts of potential awesomeness! Even if you’ve never read a Thor title before, this might be a good issue to try out. These stories are mostly just one-offs that are meant to entertain and have little to no bearing on the current Thor story arc. Just sit back, relax and enjoy. I know I will! 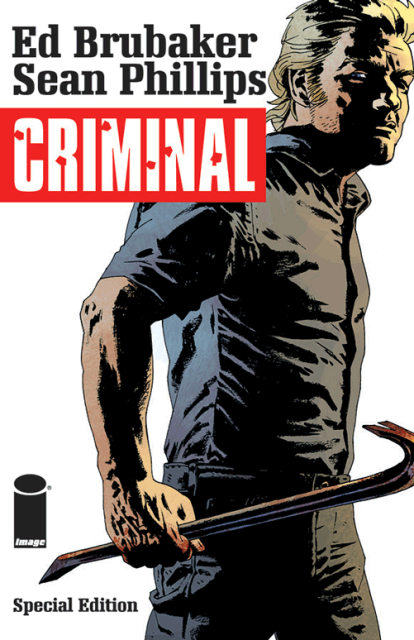 CRIMINAL COMES TO IMAGE! To celebrate the return of CRIMINAL to print, BRUBAKER & PHILLIPS return to their awardwinning title for the first time in years for a 48-page special sure to thrill their readers, old and new alike! It’s 1976, and Teeg Lawless is doing 30 days in county jail with a price on his head, his only safe company from the savagery a beat-up old comic magazine his dead cellmate left behind. It’s CRIMINAL like you’ve never seen it before, with a comic within the comic and all those slick ‘70s thrills!

Picked because: It’s Criminal…Ed Brubaker…Sean Phillips…just go pick it up and say ‘thank you for recommending it.’ 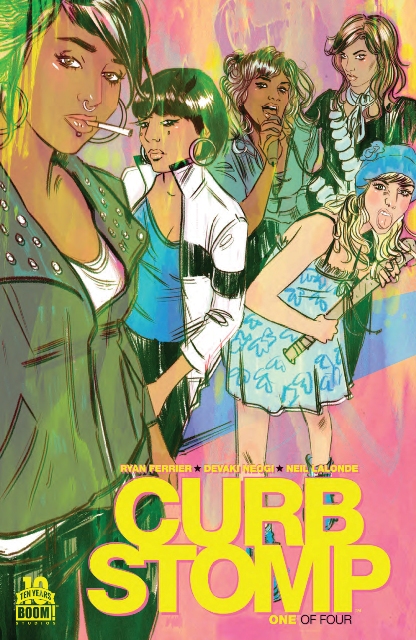 Three gangs. Five girls. No way out. Machete Betty leads a small gang of women under the self-appointed task of protecting their home of Old Beach, one of three boroughs surrounding a rich metropolitan city. When Betty takes the life of a rival gang member in an act of self-defense, she sets off a chain reaction of retaliation, gang warfare, and unlikely allies. It’s up to the The Fever—Machete Betty, Derby Girl, Bloody Mary, Daisy Chain, and Violet Volt—to defend their turf at all costs.

Picked because: Do you love Rat Queens? How about that cult-classic movie The Warriors? Then this is your book this week. It’s got that gritty 70’s vibe going on and doesn’t forget that there are supposed to be human characters at the center of this story. Ferrier already has one cult hit on his hands with D4VE and it looks like this one might just add to his already impressive resume’. If you happen to love Black Flag, this might speak to you on an even deeper level, too. Look for a lot of punk rock references throughout…oh, and some kick-ass action, too!