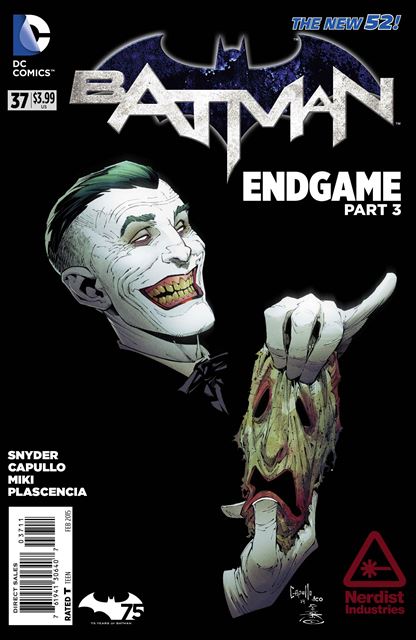 The ultra top-secret Batman arc known only as “Endgame,” continues – it’s a story arc so steeped in mystery, all we can tell you is the title!

Picked because: The synopsis may not tell you much, but I will! Joker is back and he’s unleashed a version of his Joker toxin that is like an unkillable airborne virus. It even affected Superman and Wonder Woman, something Lex Luthor’s Amazo virus couldn’t even do. Batman, Alfred and Julia have managed to stay ahead of it, but it’s clear they’re on borrowed time at this point. Gotham is turning into a literal Joker Madhouse. This story’s tension got ramped to 11 last issue with the big reveal of Joker’s new face and that he’d been hiding in plain sight for a long time. It floored me and many other readers. Brilliant scripting by Scott Snyder. But the redesign by Greg Capullo is what really brought it home. That Joker grin is even more creepy now than it was when he had no face! What Joker’s true endgame (see what I did there?) is has yet to be seen, but he’s slowly rolling it out for Batman and this time around, there’s no talk of trying to make Batman a better hero. Joker tried that last time and got nowhere with it. Now it’s like he’s on a rampage and just wants as much destruction as he can cause. The Joker toxin is just the beginning as this is only the half-way point of the story. Snyder and Capullo have said this is their final Joker story, and with a title like Endgame you can bet they intend to deliver on that. 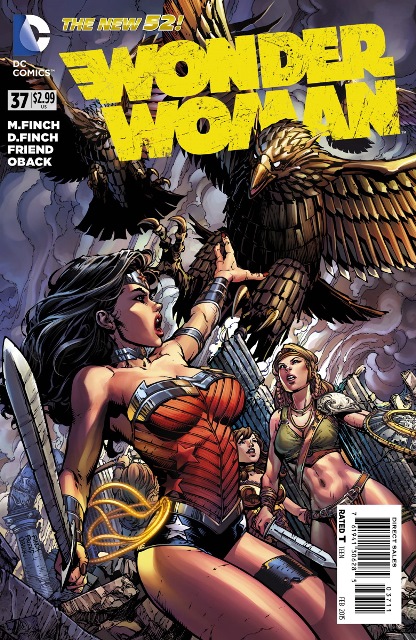 Superman arrives on Paradise Island to support Wonder Woman in her darkest hour, but their bond may be breaking apart! No time for Diana to think, though, as a mythological force seemingly tied to Wonder Woman’s role as War attacks the Amazons!

Picked because: Last issue was certainly a big change for Diana and those who’ve been reading Wonder Woman since the start of the New 52. This new story is quite different from the previous, and that’s not a bad thing at all. The new style is certainly aimed more at readers who might not have followed the previous run, but it doesn’t ignore all of that story. The events that happened have some influence over where this story is going, but it is certainly a new writer’s interpretation of the character rather than a strict continuation of the previous. That said, Wonder Woman is much more connected to the larger DC Universe now than she has been for some time. While the previous story was much better for not having to play in the larger DC sandbox, this one is using different elements and is doing it to excellent effect so far. Last issue felt much like a first issue. It had some moments that didn’t gel as well as others, but overall it wasn’t a bad effort. The setup for this issue is where the real meat of the story was and hopefully this is where that will get fleshed out. From the first few pages, it looks like that’s exactly where this arc intends to go. Meredith Finch’s script is surprisingly fresh, given her relative lack of experience in comics. Her handle on Diana as a character is still developing, but it’s not off to a bad start. David Finch’s art is still going to be for some and not for others. I personally find it to be perfectly in line with the current DC “house style” and therefore much like what we see from Ivan Reis, Jason Fabok, Jim Lee and Greg Capullo. This really does feel like a fresh start for Wonder Woman, so give it a try and make up your own mind.

Art and cover by Cameron Stewart
$4.99

The fifth chapter of the greatest adventure in DC Comics history is here!

Acclaimed for their collaborations on BATMAN AND ROBIN, SEAGUY and SEVEN SOLDIERS OF VICTORY: THE MANHATTAN GUARDIAN, superstar writer Grant Morrison and renowned artist Cameron Stewart deliver some magic to THE MULTIVERSITY with a breathtaking journey to  Earth-5 – A.K.A. Thunderworld!

With a single word, Billy Batson transforms from boy reporter for Whiz Media into the world’s Mightiest Mortal – Captain Marvel! Along with the other members of the Marvel Family, Captain Marvel battles dastardly villains like Mr. Mind and the Monster Society of Evil! But now, his greatest foe has attacked the Rock of Eternity – the source of the Marvel Family’s power – and it could mean the end of reality as we know it! What impossible villains are Sivana teaming up with who could spell doom for the Multiverse? From where did Sivana’s children get their newfound super powers? And what does the appearance of one mysterious comic book mean for the heroes of Thunderworld?

Picked because: The original Captain Marvel is back! That’s right, if you hate that they call him “Shazam” just so much (and what perfectly rational, level-headed person wouldn’t, am I right?) then that’s reason enough for you to pick this up. For everyone else who isn’t bothered by that so much, the reason to pick this up is because it’s a fun story from Morrison and Stewart! Multiversity has been one of the absolute best, most inventive and delightfully retro titles DC Comics has ever produced. Letting Grant Morrison play in his own worlds is a sure way to get the best work out of him. There’s not box here, Morrison destroyed it and built something entirely new. Morrison’s encyclopedic knowledge of DC continuity can be troublesome at times because he will make references to things that only people just like him can understand, but in something like Multiversity it hardly matters. This is allowing him to set the pace and use any and all characters in the DC library to whatever effect he likes. And making each issue of this series into a “#1” is a stroke of genius. Each one really is its own story, despite there being connective tissue in the background. You can buy just one, or all of them for a complete, connected story. Each issue has only gotten better, so there’s no reason you shouldn’t be getting all of these. 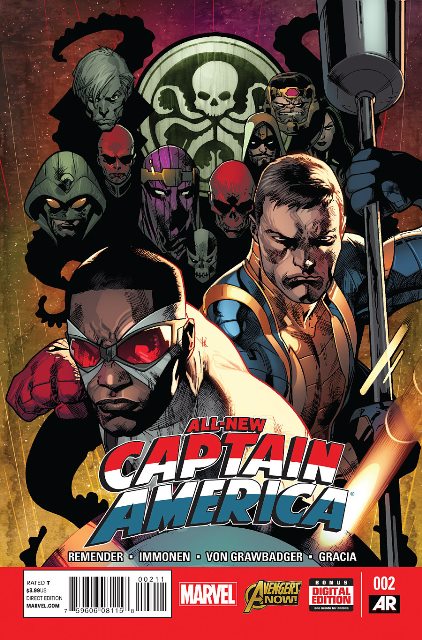 Picked because: Sam Wilson is such a natural fit as Captain America! And talk about a perfectly paced and toned first issue, #1 was a blast. If you skipped all of the previous Captain America series, don’t worry, this is about as welcoming to new readers as you could ask for. The story is easy enough to catch up on with those handy “Previously in…” pages at the beginning and Rick Remender is giving us some great flashback pages at the beginning to introduce us to Sam Wilson behind the mask. Those are some of my favorite scenes in the series so far. And let’s not forget about Stuart Immonen’s action scenes. He did an incredible job on All-New X-Men and I think he’s doing even better so far on Cap. He knows how to direct your eye to follow the action and it all has a nice blend of realism with an “animated” feel to it. And his facial expressions are just top-notch. Guy is a truly great talent for Marvel to have. It’s still early in this run, too, so jumping in now is not so difficult. And you should still be able to get a copy of issue #1 easily. If you’re a fan of spy/action stories, this is totally the mainstream superhero book for you.

Picked because: Off-the-wall absurdity meets something that feels like a mix of Tarantino and Zack Snyder is what you’re in for here. John Arcudi did a really great job on BPRD at Dark Horse and his knack for writing fun, quick-cut scenes will play nicely in this type of story. It’s definitely not going to be the standard comic book fare you’re used to or that you saw in the previous picks. This will be off the beaten path, for sure. But that’s what makes it fun. You get to just dive in and see where this kind of insanity might lead and you never know who might show up. Seriously, there’s a Paul Bunyan moment in there, folks. Full-on big blue ox and everything. If you get a little bit of Don Quixote in there, don’t be surprised. This one totally has that vibe going on, but with a bit of Twilight Zone mixed in, too. Sometimes you just need to have fun with comics and not take things too seriously. That’s where Rumble comes in, I think. It’s a chance to just have fun with something adventurous and completely insane. You may wonder what kind of mind would come up with this by the end, but if you’re laughing and ready for more by then, it did its job.