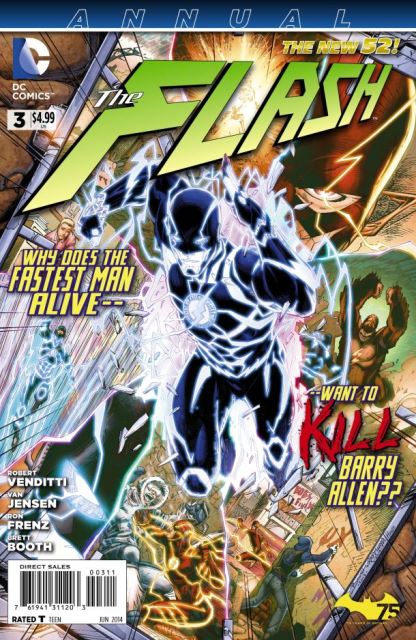 The Flash Annual #3 – Written by Robert Venditti and Van Jensen

The start of a major new arc for the Fastest Man Alive! In the future, The Flash is a broken man. His powers have failed him time and again at great cost to him and the city he has sworn to protect. Now he’s coming back to 2014 to stop the one event that destroyed his life. Meanwhile, in the present, Barry Allen must contend with thieves trying to capitalize on the devastation of FOREVER EVIL. It’s a tale of two timelines that ushers in one of DC’s most storied characters…featuring The New 52 debut of Wally West!

Picked because: Wally West is now in the New 52 and we’re getting his origin here! Sure, he’s a bit different from the Wally we all knew and loved in the pre-New 52 DC Universe, but that doesn’t mean this new version won’t be just as fun to read. Last week, Flash #30 also introduced us to our new Scarlet Speedster creative team and they’ve decided to keep themselves busy. Robert Venditti, Van Jensen and Brett Booth pull double-duty this month with this Annual, which is almost double the size of a standard issue (which explains the extra two dollars). If this issue plays out in the same manner as last week’s #30, it’ll be worth the extra cash. The action was fast and fun, courtesy of Booth’s expertly-timed pencils, but it’s the smaller, quiet moments that really sold it. Just like #30, Annual #3 looks to make those deeper character moments the standouts, both for the writing and the art. If you’ve been holding out on trying The Flash, now’s a good time to change that. While Forever Evil is likely to be referenced in the story, all you need to know about it for this story is presented, too. Barry Allen is in good hands with this team. And maybe, just maybe, they’ll give us a new…slightly “Impulsive,” sidekick to root for, too. 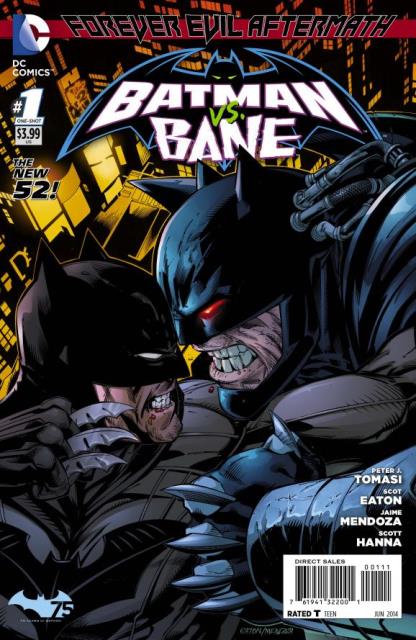 Art and cover by Scott Eaton and Jamie Mendoza
$3.99

The title says it all! FOREVER EVIL is over! Now, Batman has returned to take Gotham City back – by force! The only thing standing in his way? BANE! Get ready for the grudge match of the year!

Picked because: Speaking of Forever Evil, even though the final issue isn’t out yet, DC has moved forward with several titles that take place in its wake. This story is how Forever Evil: Arkham War was originally supposed to end. Bane has won and taken control of Gotham…until Batman comes home to take Gotham back. This is the fight we’ve been anticipating for a while now, but it’s likely to feel a bit strange due to Forever Evil #7 delayed until next month. Still, that moment when Batman walks back into Gotham and lays down the law is going to be huge! Peter Tomasi played the long game with this miniseries/tie-in and for the most part it’s worked. There were some slower moments and a total non-ending of the so-called final issue, but at least we’re not going to be left hanging. If all this turns out to be is a huge fight between Bane and Batman, it’ll still work. It would be nice to see how the Talons and some of the Arkham inmates have adjusted to Bane’s control and what parts they play in all this, but the most important thing is that this will show us how Batman put Gotham back in the hands of the authorities in the lead-up to Batman Eternal, which is also a book you should be picking up this and every week! 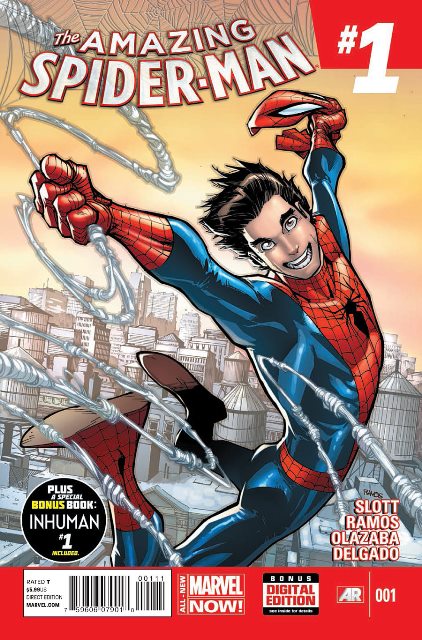 The Greatest Super Hero of All Time RETURNS!

The world may have changed since Spidey’s been gone, but so has Peter Parker. This is a man with a second chance at life, and he’s not wasting a moment of it. Same Parker Luck, new Parker attitude. Putting the “friendly” back in the neighborhood, the “hero” back into “super hero,” and the “amazing” back into “Spider-Man!” Also returning: The recharged and reenergized ELECTRO!

Picked because: Peter Parker is back and behind the Spider-Man mask where he belongs! The Superior Spider-Man finale left a lot of tangled threads and unanswered questions, but all of that will serve to make this one of the most dramatic comebacks in comic history. Of course, with Original Sin looming and the revelation that Peter wasn’t the only one bitten by the spider all those years ago, we might not get to all of those loose ends right away. That’s fine, Slott does a great job with the long game (see previous series!). There’s also that little movie, Amazing Spider-Man 2, coming out this week. And Electro returning to the scene after a short (and awesome!) stint in the current Punisher series. But the real fun in this book is when Humberto Ramos cuts loose and shows just how much fun it is to be Spider-Man. Forget the super-serious, pompous Octo-Spidey, this is Friendly-Neighborhood all the way! Superior was great for what it was and it gave us some hugely-entertaining and griping moments. But we always knew we’d see Peter Parker again…and not a moment too soon! And while the issue is extra-sized, we’re also getting the first issue of Charles Soule’s Inhuman included with it. While not exactly a complete freebie, new readers might even find something unexpected to enjoy.

Welcome to Craw County, Alabama, home of Boss BBQ, the state champion Runnin’ Rebs football team…and more bastards than you’ve ever seen. When you’re an angry old man like Earl Tubb, the only way to survive a place like this…is to carry a really big stick. From the acclaimed team of JASON AARON and JASON LATOUR, the same bastards who brought you Scalped and Wolverine: Japan’s Most Wanted, comes a southern fried crime series that’s like the Dukes of Hazzard meets the Coen Brothers…on meth.

Picked because: The hardest part about coming home is realizing you’re not the same person who left. And in the case of Jason Aaron’s latest work, that means a whole lot of people are probably going to get killed. Aaron, an Alabama native, knows how to write those truly tense scenes and this series is likely to be full of them. Aaron and Latour also created the hit series Scalped, so that should give you an indication of what you might be in for in this series. If not, imagine Walking Tall if it were directed by the Coen Brothers (Fargo, No Country for Old Men). Aaron has described this book as his “love/hate letter to the south.” What that means exactly, we’ll have to wait and see. But, given his ability to tell deeply character-driven pieces, this should be one of the best new comics of the year. Don’t miss out on what might be the next big thing for Image!