The Flash #30 – Written by Robert Venditti and Van Jensen

An all-new creative team makes its debut to show the deadly consequences of The Flash’s speed powers. During the traumatic events of FOREVER EVIL, Central City suffered the worst that the Crime Syndicate could dish out. Now The Flash has returned to make things right, but there are limits to what even the Fastest Man Alive can do!

Picked because: The new creative team has arrived and they are kicking things off in spectacular fashion! Those reading Green Lantern and Green Lantern Corps will recognize the new writers and they’re being joined by one of DC’s best and brightest, Brett Booth, on pencils. This new team isn’t exactly filling small shoes, either. The previous creative team of Francis Manapul and Brian Buccellato was, to say the least, legendary. They truly established The Flash as one of THE premier books of the New 52. Following that would be intimidating for anyone. However, this writing team has a proven track record of creating great stories. Green Lantern Corps remains the best book in the entire Lantern line (though Red Lanterns is right on its heels). This isn’t a bad introduction to the Scarlet Speedster, either. If you’ve been thinking of trying to jump on this title, #30 is where you need to start. This is all in the post-Forever Evil DC Universe, so some things may get referenced, but don’t worry about that. Nobody else knows how Forever Evil ends, either. 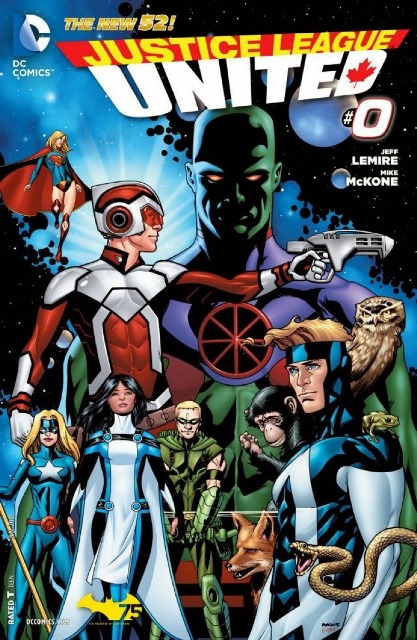 In the aftermath of FOREVER EVIL, Adam Strange is caught up in an adventure across the far reaches of the cosmos that will unite an unexpected team of heroes including Supergirl, Hawkman, Green Arrow, Stargirl, Martian Manhunter and Animal Man – but if they’re on the team, who exactly is Canadian? Plus: Don’t miss the debut of a new Canadian hero who will have a huge effect on the group!

Picked because: Crazy cosmic adventure with one of the most eclectic superhero teams ever assembled and all being written by Jeff Lemire? How can you say ‘no?’ DC’s experiments have always been hit-and-miss but, if there was a betting pool on this one, I’d say put your money on ‘hit.’ Lemire is known for his ability to succeed with out-there concepts, even if the books don’t always become financial hits (ahem, Frankenstein, Agent of S.H.A.D.E.). This project was originally titled “Justice League Canada” since the team’s base of operations has moved north of the border, but a much-needed retooling of the name was done. Still, the first story arc wound up using the name, so there’s a call-back to it in any case. Lemire is also getting to use two characters his intimately familiar with: Green Arrow and Animal Man. Lemire’s run on the former continues to be one of the best New 52 titles and the latter proved, once again, that C-list heroes sometimes have A-list stories. And if you’re familiar with Lemire’s Vertigo work (Trillium, Sweet Tooth) then you know high-concept is something he does incredibly well, too. Let’s hope this JL title sticks around for a while. 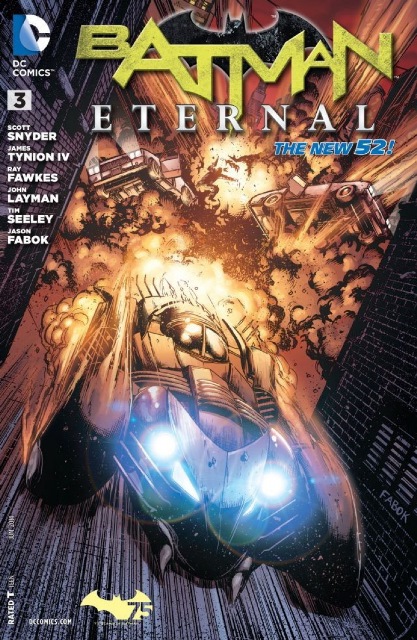 A gang war erupts in Gotham City, but the G.C.P.D. doesn’t plan to help Batman stop it. Plus: The return of a fan-favorite Batman supporting character: Stephanie Brown!

Picked because: Even though she had a teaser moment back in Batman #28, this will be Stephanie Brown’s first full-length appearance in the New 52. Time for all those fans who’ve been complaining to step up and show some support now. If you’ve been at any major comic convention over the last couple of years, you know it’s impossible to attend a DC panel without somebody asking why Stephanie hasn’t been included in the New 52. There are lots of fan sites and even more avid (often obnoxious) fans on the message boards railing against DC for not giving their favorite character her own title or keeping her on as Batgirl during the reboot. She’s back now, though, and in her old Spoiler persona. She’s also being written by a superstar team who’ve been highly praised for their Batman work. This new incarnation of the Spoiler character is being set up to play a huge part in the Eternal story going forward, as we saw in Batman #28. What that is, exactly, hasn’t been revealed fully but will likely get some major clues in this issue. There’s also the continued downfall of Jim Gordon and building intrigue for several other members of the Batman family. If you’re not on any other Batman title right now, this is probably the one to buy every week. 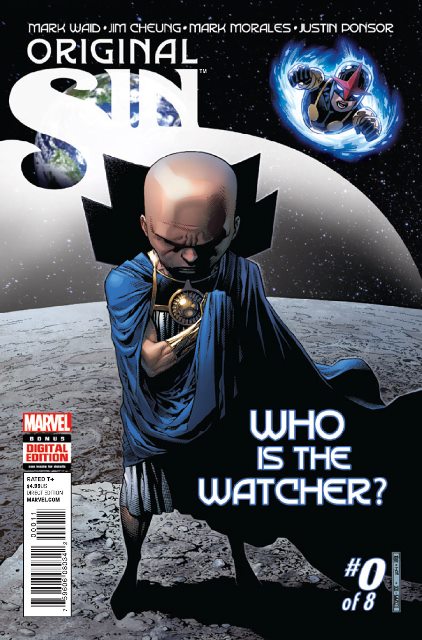 WHO IS THE WATCHER? That’s what Nova is wondering after his latest brush with the moon-dwelling enigma he’s encountered before! But what he discovers will have a profound effect on the young hero, as well as priming the pump for the most cataclysmic event in Marvel history! WHAT DID HE SEE?

Picked because: This is the beginning of Marvel’s next event title, but it’s also a chance for those unfamiliar with The Watcher to get to know him a little…before he dies. Your mileage on event books will vary, but a good murder mystery can be especially fun when the dead character is one who’s supposedly immortal. If you haven’t been reading the current Nova series, this might be a good catch-up on the Sam Alexander character, too. There were some who didn’t care for Jeph Loeb’s new creation, but with Mark Waid at the helm, the adventure and dialog are likely to be top-notch. As events go, it’s nice to see one that’s concerned with the Marvel Universe as a whole, rather than pitting one group of heroes against another or going for another invasion trope. Most events go for the bombastic approach, but this could wind up being Marvel’s antithesis to that. Sure, there’ll be explosions and action, but the meat of it all could be in the larger mystery behind both who killed The Watcher and why. 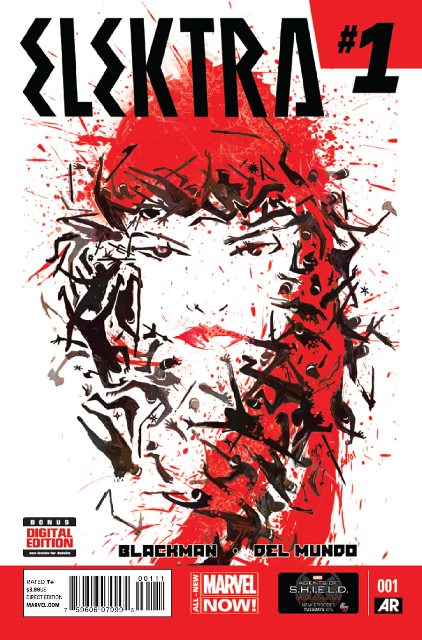 Witness the beautifully violent return of the world’s deadliest assassin. A life spent in silent pain has led Elektra to the precipice of despair. As she prepares to shed her past and take her next step, everything you know about her will change! Death is no escape, but she will find her way as a new option opens up that will take Elektra to places no other Marvel character can go.

Picked because: Sometimes it’s o.k. to buy a book solely for the art. This first issue is worth the price of admission just to look at over and over again. Michael Del Mundo has done a lot of cover art for Marvel over the last few years, but he’s rarely done interiors, much less a regular ongoing. This is indeed a rarity and one that fans of highly-dynamic, painted art should not miss. Even if Elektra isn’t a character you’re necessarily interested in following, this is one of those moments in comics you should make an exception. Not that Hayden Blackman doesn’t have something to contribute, too. He was the co-writer of Batwoman with J.H. Williams, III when the title launched in the New 52. His Marvel debut may turn out to be even better than that hit title. Marvel has experienced some high-quality turns for its recent relaunching of several solo titles. Black Widow, Ms. Marvel, The Punisher, Thor: God of Thunder and Moon Knight have all garnered a large amount of praise from readers and critics. Elektra looks like another title to add to that list. 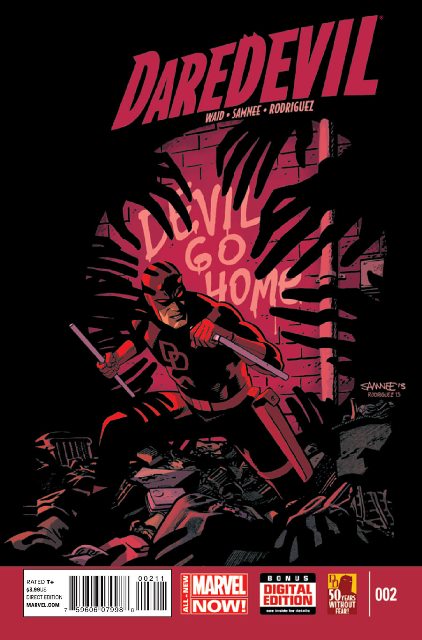 • Daredevil’s in over his head in his new hometown, which isn’t at all as he remembers it!

• New threats, new obstacles…and a forgotten Marvel hero steps from the shadows to make him feel MOST unwelcome!

Picked because: After the mostly one-and-done first issue that set up the new status quo, it’s time to kick this new volume of Daredevil into high gear. Mark Waid and Chris Samnee are about to do just that, too! When you move to a new place, even if you think you know it, it can take some getting used to. Parading around like it’s your town can attract trouble, though. Matt Murdock hasn’t quite learned that yet so he’s about to get a lesson in it. Waid has handled ole’ Horn Head perfectly since launching his first volume on the character back in 2011. Seeing him in a completely different setting and (hopefully) building toward the potentially amazing future seen in Daredevil #1.5 is exactly where this title needs to go now. The New York storyline is all-but wrapped up and this feels both new-reader friendly and like a solid continuation for long-time fans. And if you’ve read any of Waid’s previous work, you know this is going to be some of the most fun you’ll have reading comics. Don’t miss this!

Holed up and under siege, Gage and his accomplices may have run out of road…but not bullets. Or heads to put them through.

Picked because: This series just keeps moving at a break-neck pace! Sure, a six-issue mini should move that fast, but many have fallen into the exposition trap. Justin Jordan totally side-stepped it with this one and it’s paid off in a huge way. Gage is in a real fix at this point, but somehow his run-head-first-into-danger style has worked out, mostly because he’s had effective backup…even if they don’t seem too eager to help most of the time. This chapter is going to be about ramping up the tension and finally dropping some big reveals about why things have happened to everyone involved. As much fun as the action has been, there’s been some Tarantino-esque plot twists along the way that have turned this into one of those stories that needs to be read at least twice to get the whole picture. This is a breakout performance for Matteo Scalera, too! If you’re a fan of artists like Sean Murphy (Punk Rock Jesus, The Wake) and Greg Capullo (Haunt, Batman…duh) you’ll probably dig this guy, too. Very kinetic style mixed with great splashes of shadow and sharp lines. He also knows his way around an action scene better than most. If you missed the series to now, make sure to get the trade when it drops. 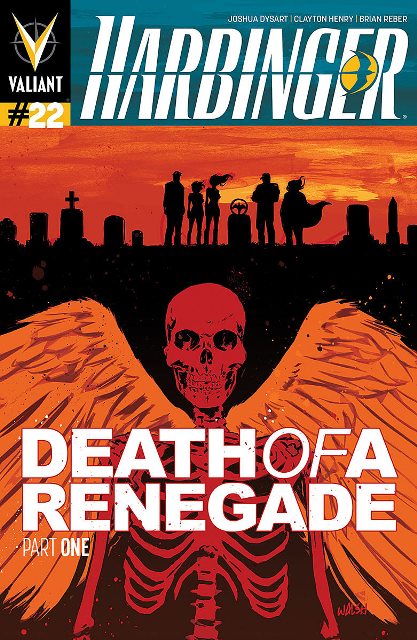 Picked because: The final story arc of this incredible series is starting and it’s both exciting and a bit sad. Of all the new Valiant series, this one has been the most consistently good with excellent art to boot. It’s going to be a real shame that this won’t be on the shelves anymore once this arc is finished. After everything Joshua Dysart has put Peter Stanchek and the Renegades through, it does seem time to bring the larger story to an end. Toyo Harada has become one of the best, if not THE best, villain in all of Valliant Comics, but after all this buildup and anticipation, it’s time for a final battle. The emotional payoff of this should be one for the ages. Dysart isn’t one to tease something and not deliver. If he titles a story “Death of a Renegade,” then one of them is definitely going to die. Everyone has their favorite with this series, so whoever it is will leave a lasting impression on loyal readers. If you’ve skipped this series for any reason, it’s highly recommended that you get the trades and catch up. This is what good comics should always be like.