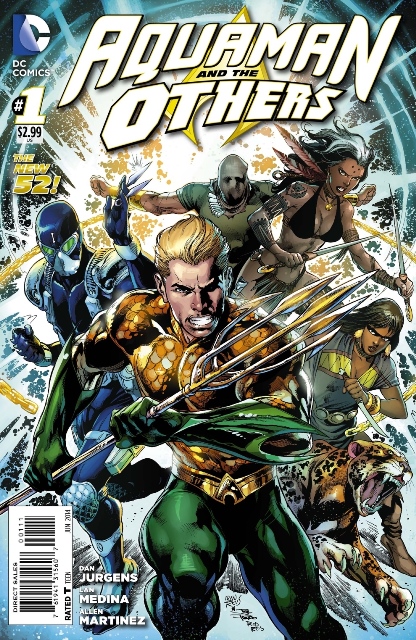 Aquaman and The Others #1 – Written by Dan Jurgens

A “FUTURES END” prelude! Spinning out of AQUAMAN, the King of Atlantis and his teammates find themselves targeted by an unknown foe that wants their Atlantean artifacts! Don’t miss the start of this all-new series!

Picked because: Who would have thought that Aquaman would get two ongoing series? Even better, this is setting up the other title Dan Jurgens is working on, Futures End! But all of that aside, this story is picking up a plot thread from Geoff Johns’ time on the main Aquaman title and giving us more of The Others, a team that became quite popular thanks to Johns. Jurgens has a long history at DC and he’s easily one of their best writers and artists. But the art duties fall to Lan Medina, whose style isn’t that far removed from regular Aquaman artist, Paul Pelletier. The feel of this title harkens back to the classic Indiana Jones adventures which can only be a good thing. If you’re already reading Aquaman, there’s no reason not to jump on this book. New readers are going to find out a lot about the history of Atlantis in this series and see how it ties into the larger DC Universe along with some fast-paced action that gets going right from the start of this one. If you were at all curious about what the significance of the Atlantean artifact weapons used by The Others is, your answers are going to start here. 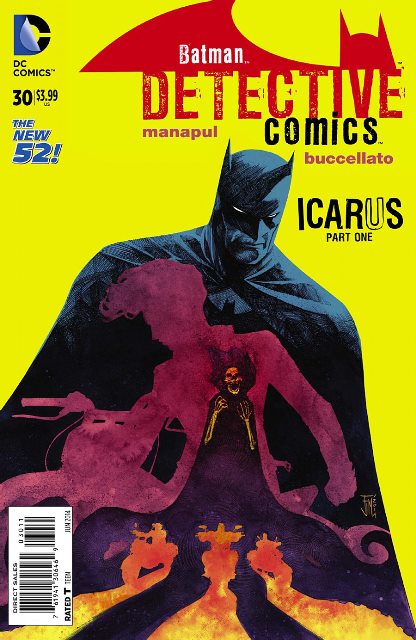 A bold new direction for DETECTIVE COMICS as THE FLASH creative team of Francis Manapul and Brian Buccelato take over the creative reins! Batman finds himself knee-deep in a new mystery involving a deadly new narcotic that has hit the streets of Gotham City.

Picked because: A new creative team starting a new story arc with what might be some of the best art in all of DC Comics…what’s not to love? Francis Manapul and Brian Buccellato made quite an impression on DC fans with their Flash run (PUN!) and now they’re bringing a darker, street-level tale to Batman’s flagship title. Fans of this team’s previous run might recognize the title Icarus from their Zero Year tie-in a few months back. That story is providing a nice segue into this arc so the transition from one title to this one should be fairly smooth. And, of course…that art! Manapul has been making waves at DC for several years now and has quite a following all his own. His layouts are some of the most creative in the industry and now he’s getting to incorporate that into Batman. For those fans who want a grounded take on the character that also turns out an actual mystery, this will be the book for you. Detective has struggled since the beginning of the New 52, sometimes giving us an interesting narrative, but with only a seeming half-hearted execution. Both Manapul and Buccellato have a passion for the character much in the same way that Scott Snyder and Greg Capullo have on their title, Batman. If you’re also looking for a Batman story that’s not directly tied to all the current events (Forever Evil, Zero Year), this will be the Bat-Family book to pick up every month. 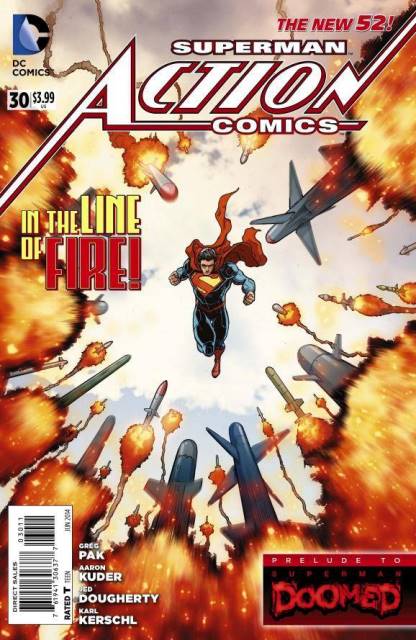 Superman: Doomed begins! Forces beyond Superman’s control gather to destroy the Man of Steel. And in their back pocket: Doomsday. While weakened from his incarceration, Doomsday’s still strong enough to destroy an iceberg with a single blow. How did he cross over from the Phantom Zone? And how long can the Ghost Soldiers distract Superman while Doomsday gains strength?

Picked because: Doomsday is out of the Phantom Zone! The real questions are why and how did the force behind Tower Command get him out? This prelude chapter to the crossover mini-event, Doomed, is following up Greg Pak’s and Aaron Kuder’s stellar first arc on this title, but is going to feel more like a continuation of the previous story. If you’re a pet owner/lover, you’ll probably share Superman’s level of anger over what happened in the previous issue and can’t wait to see him get his hands on the people responsible. Don’t worry, it’s coming, but there’s more to this story than meets the eye. And it’s likely that Superman’s recently-defeated adversary, Ghost Soldier, isn’t fully aware of all that’s happened. No way is he going to be cool with Doomsday walking around free. And Aaron Kuder’s art has really become a big draw (PUN, again!) for this title. Where so many DC books take on a darker, grittier tone, this one goes for the lighter, action-filled character study with plenty of good humor peppered throughout. Pak and Kuder have yet to disappoint with this book and if you’re on no other Superman title, at least give this a shot. It really has captured what we all love about Superman and more. 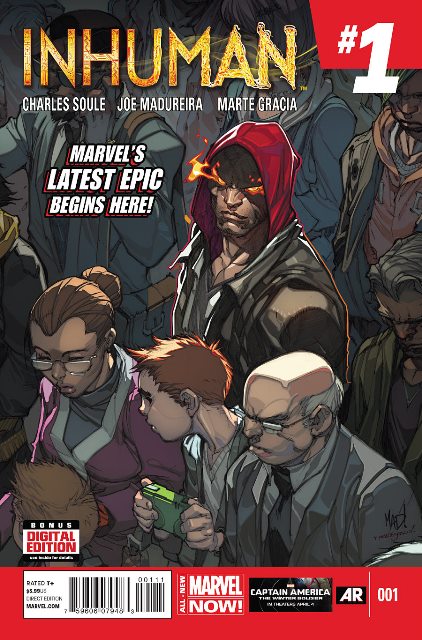 Picked because: It’s been a long time coming, but Inhuman has finally arrived. Charles Soule just doesn’t know how to slow down. After announcing he’s walking away from Thunderbolts, he immediately has another ongoing to add to his list. At least he’s capable of handling it without losing his footing. With Inhumanity winding up, it was time to launch a new book to introduce new readers to the Inhumans concept. And with so many new Inhumans popping up (including the incredible Ms. Marvel), this will be a good way to get to know both the new and old. It’s always fun to discover new heroes and villains at the beginning of their journeys. Marvel has spent the last couple of years revamping some old names and teams for the modern era and this will fall in line with that initiative, but it’s also a chance to introduce new characters and concepts under a familiar name. If you’re not a fan of mutants or the Avengers books, this might suit you better. Sure, there’s lots of history surrounding the Inhumans, but like most of Marvel’s recent titles, you won’t have to immerse yourself in years of history to understand what’s happening. Charles Soule is an expert at making things accessible for new readers, so there’s no need to feel the least bit intimidated here. 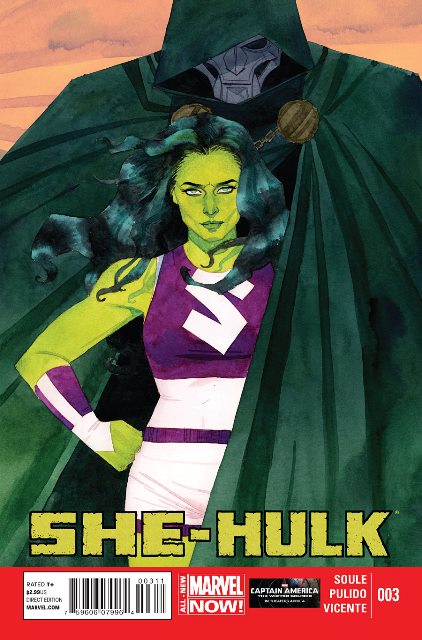 • We the people find you DOOM!

• When the son of Victor Von Doom seeks extradition, Jen Walters will go to the ends of the earth for Justice!

• All this, and Matt Murdock too as Charles Soule (THUNDERBOLTS) and Javier Pulido (HAWKEYE) continue 2014’s sleeper hit!

Picked because: Speaking of Charles Soule, his run on She-Hulk has been nothing short of brilliant so far! Last issue was more about Jennifer getting to know her new employee and office mates than advancing a larger plot, but a huge deal just landed in her office: the son of Doctor Doom. This courtroom drama/superhero comedy just got a huge amount of villainy tossed into it. And how is Doom going to react when he finds out his son plans to defect to the United States? Hint: not well. Good thing he’s got a Hulk backing him up, he’s going to need it. Probably not so good for Jenn’s new landlord, though. This is likely to get messy in a hurry.  But it’s also going to have some of the best dialog you’ll ever read in a comic. And Javier Pulido’s art just keeps getting better! His almost-comic-strip style of storytelling might be off-putting to those looking for more cinematic superheroics, but his layouts are what really sell it. While there might be a lot going on in a splash page, he never lets the clutter take away from the larger story. It’s always fun and keeps a strong pace. And Soule, a lawyer himself, is getting a crack at writing Daredevil! That’s worth the price of admission all by itself. And that it’s only a $2.99 book should make that decision even easier. If you haven’t given this a shot yet, you should this week. 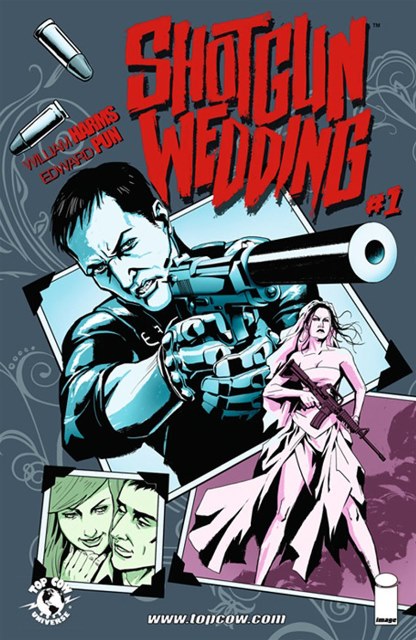 Mike Stone wants nothing more than to marry the woman of his dreams. Denise is smart, sexy, teaches the second grade, and loves Mike more than anything in the world. What she doesn’t know is that Mike is one of the world’s top assassins and was once engaged to a fellow assassin named Chloe. And when Mike abandoned Chloe on their wedding day, she vowed revenge.

Picked because: One part Kill Bill and one part Mr. and Mrs. Smith is sure to make this a sleeper hit of 2014. Writer William Harris has spent a lot of time in the horror genre, so this is going to be a pretty major change of pace for him. But, his dialog is typically snappy and Edward Pun’s (PUN?) art is in the vein of lots of modern action animation. It’s what a Tarantino film might look like if it were animated. It’s been said that “Hell hath no fury like a woman scorned.” That’s probably even more so when that woman happens to be one of the world’s top assassins. Mike Stone is probably about to have a really bad day. If nothing else, we’re all in for a speedy thrill ride that’s hopefully going to lead to more titles like this coming later. Since this is a mini-series, some might think about trade-waiting, but it’s important to support stories like this when they come out to encourage more publishers to give them a chance. It is a little pricier than most Image minis, but from the looks of the preview pages, it’ll be worth it.