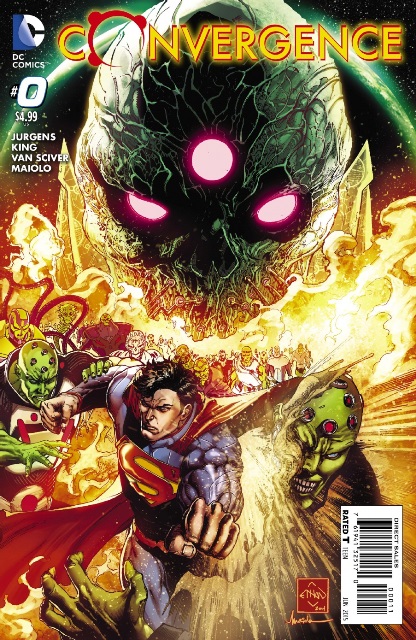 Where do worlds go when they die?

The Earthquakes felt round the Multiverse, Superman’s lost days after “Doomed,” the World’s End – all these points will converge as the history of the DCU is spun from a new perspective, the perspective of a mad god and his arrogant child. The biggest story in DC history ties into literally every DC story ever told – and it all begins here.

Kingdom Come, Red Son, Wild West Justice League, Captain Carrot and the Zoo Crew – all the worlds you remember can still be found on Telos. Everything matters. Every story matters.

Don’t miss the start of DC’s April/May 2015 event with this special issue!

Picked because: This is it, the weeklies Futures End and Earth 2: World’s End are over and for the next two months this is the DC Comics universe (Multiverse in actuality). This issue is the setup for the series as a whole and also helps fill in the 60-day gap in Superman’s memory following the events of Doomed. This will be Jeff King’s (Heroes) first time writing comics for any major publisher but he’s getting some help from long-time DC staple Dan Jurgens and superstar artist Ethan Van Sciver. The stories of Futures End and World’s End finally come together after being a mixed bag of great and not-so-good each week. If you think this is worth skipping because it won’t affect the larger DC Universe, think again. This is the moment when the larger DC story goes in a new direction, especially with books like Earth 2 and Superman. And fans of the older and Elseworlds stories will definitely find something to love during the event as there are plenty of easily-accessible two-issue miniseries meant to give more satisfying endings to stories that may have left some fans hanging. This might not be the biggest event in DC history, but it’s still going to be fun with something for just about everyone. 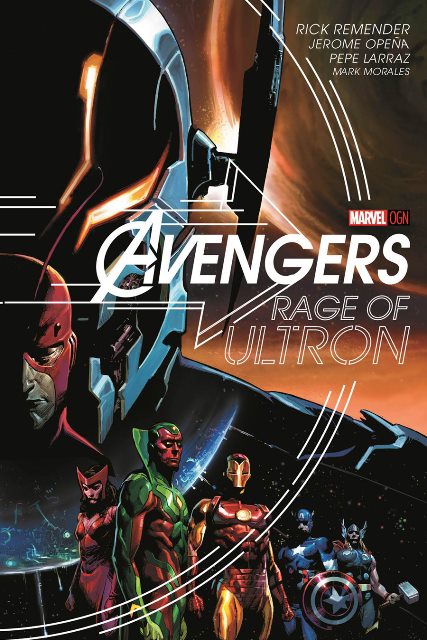 It was another glorious victory for the Mighty Avengers. Good triumphed over evil and Ultron was shot into space, never to be seen again. Or so they thought. Now, years later, the homicidal artificial intelligence — so long devoted to ending life on Earth — has found a new world to conquer…one with its own horrific legacy. When Titan, birthplace of Thanos, falls, Planet Ultron rises in its place! Thanos’ brother Starfox must seek the aid of his former allies — but the Avengers he finds are radically different from the ones he once knew. Among them is Ultron’s creator Giant-Man — and when Hank Pym confronts his now planet-sized “son,” the responsibilities of fatherhood have never loomed so large. Rick Remender (UNCANNY AVENGERS) and Jerome Opeña (AVENGERS) unleash the full robotic rage of Ultron on Earth’s Mightiest Heroes!

Picked because: The recent crop of Marvel original graphic novels have been largely fun and Remender’s run on Uncanny Avengers is both a commercial and critical success for the company. This story combines two generations of Avengers and gives us a version of Ultron that is bigger (literally) than any version of him before. Jerome Opeña has a great history with Avengers and big action scenes so there will definitely be a few breath-takers in the mix. These titles are usually fairly accessible, too, so it should be easy for just about anyone to get into this one without having to do a ton of back reading. 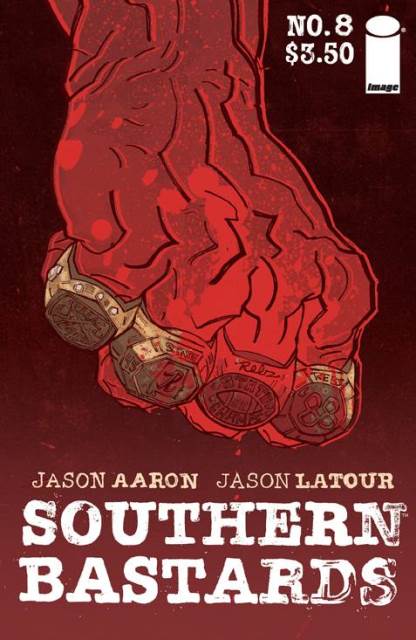 The final chapter in the story of how the worst football player in Craw County rose to become “Coach Boss,” and the terrible bloody price he had to pay along the way. Don’t miss the chilling conclusion of “Gridiron,” the second arc in the seminal southern crime series.

Picked because: How is anyone still not reading this title?!? When Aaron and Latour wrap up a story arc there’s usually some major plot twist and it usually means somebody dies horrifically. Coach Boss may have seemed like an irredeemable bastard in the first arc, but now he’s become one of the most sympathetic villains in all of comics. As his journey has unfolded over the last four issues it’s clear he’s also one of the most intriguing and complex characters Aaron and Latour have ever created. Image is loaded with great titles these days, but this is the true standout. It’s unlike anything else in the lineup and certainly one of the best comics running today. If you haven’t yet, do yourself a favor and get on this title.