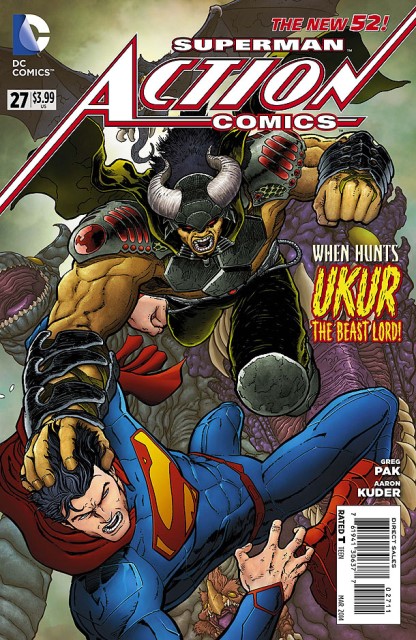 Action Comics #27 – Greg Pak and Aaron Kuder have come in with the thunder! Last issue was the single best Superman comic since the beginning of the New 52 and this dynamite team shows no signs of stopping. Last month we got both great Clark AND Superman moments and the reintroduction of Lana Lang to the New 52 and she’s never been better or more interesting.

This issue looks to build on the mystery of the shape-shifter monster/child from last month and hopefully more on the Ghost Soldier, who just might be the most interesting new villain in Superman’s rogues gallery. But the highlights for me, so far, have been the flashback sequences to Clark’s childhood in Smallville. Seeing how his relationship with the Kents changed as his powers developed is simultaneously heartwarming and heartbreaking. That’s brilliant writing! Not to mention some one-of-a-kind art from Kuder, who’s visual style sets this title apart from all the other Superman books. If you haven’t tried a Superman title before, this is the run to get started with. 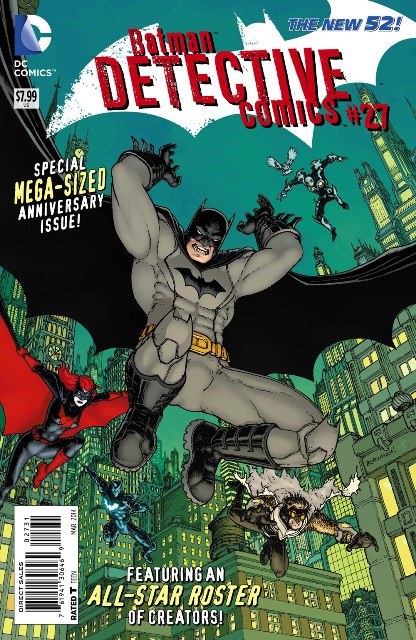 This issue is also the beginning of John Layman and Jason Fabok’s last story on the title, Gothopia. Layman’s run has been a bit uneven, overall, but the good does far outweigh the bad. And Fabok’s art is some of the best in all of the Batman titles. This team’s energy is going to be missed, but this semi-crossover story is sure to take them out with a bang. Oh, and there’re also one-shot stories from Scott Snyder and Sean Murphy, Gregg Hurwitz, Paul Dini and Peter Tomasi. And there’s some guy named Frank Miller who’s contributing some art, too. I’m not sure, but I think he might have done something really important in the Batman mythos a few years back. 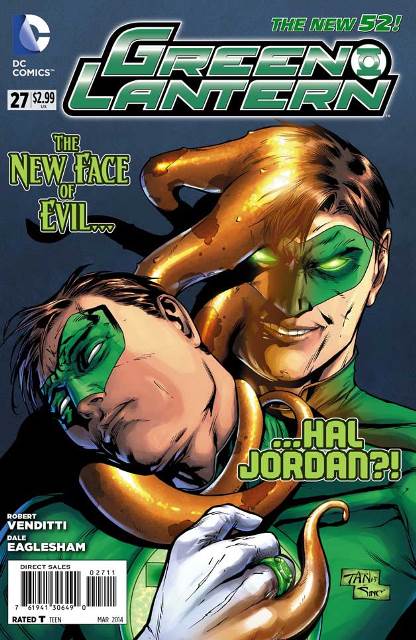 Green Lantern #27 – Boy, things have gotten pretty rough for the Corps. Some harsh things were said and done in the previous issue and it’s becoming apparent to everybody that policing all the other Lantern Corps isn’t going to go smoothly for anyone. It’s caused some serious tension in the ranks, even between two good friends like Hal Jordan and John Stewart. John showed Hal just how frustrated he is in Green Lantern Corps #26. It’s o.k. now.

But all is certainly not well. Saint Walker is waking up from his coma following Lights Out and he’s waking to a universe where there are no more Blue Lanterns. Then there’s the oncoming Durlan War. It’s been building for a while now, but this issue is going to kick things into a higher gear. Robert Venditti, with guest artist Dale Eaglesham, is laying the foundation for the next big battle the Green Lantern Corps is going to face. So far this new creative direction has shaken things up more and more with each issue and this one looks to continue that trend. 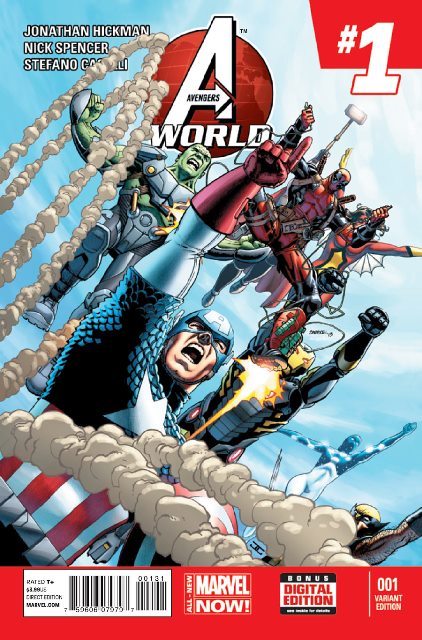 Avengers World #1 – As Iron Man and Captain America have concluded, The Avengers have to get bigger. Well, it’s hard to imagine bigger than this. The team is boasting an 18+ membership, but with a heavy focus on some of the newer heroes who’ve joined the ranks over the last year. Characters like Hyperion, Smasher, Cannonball, Shang-Chi, Starbrand and Sunspot are likely to become the main focus, at least for the first story arc.

Jonathan Hickman is a busy guy these days, so he’s taking on a co-writer in Nick Spencer to help him out with this one. If you’ve read Spencer’s Bedlam and/or Superior Foes of Spider-Man, you know the dialog writing is going to wind up being some of the best Marvel is producing. Stefano Caselli’s art is some of the most kinetic and detailed you’ll see in the Avengers line, so expect some great, action-oriented panels. 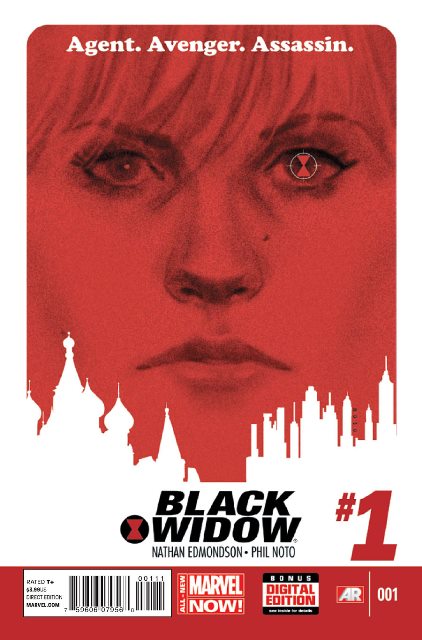 Black Widow #1 – Talk about a long-time coming. Better late than never? Let’s hope so, because it’s about time Hawkeye got a little internal competition. Writer Nathan Edmonson is no stranger to espionage titles. His “Who is Jake Ellis?” made quite an impression. And with Phil Noto on art duties, this title has all the makings of the next critical darling for Marvel.

The heavy focus on Black Widow trying to make up for her checkered past could easily play as a perfect sister title to Matt Fraction’s Hawkeye. The potential is certainly there for a new team dynamic to form organically between the two titles at some point. For now, letting each issue focus on individual missions to take out some really bad people should make this one loads of fun. And even though she’s trying to make up for some past sins, that doesn’t mean Natasha Romanoff won’t be adding a few new ones, too.

All-New Marvel NOW Point One #1 – Not sure what you might want to try out with all the new Marvel NOW! titles? Here’s a giant-sized sampler to help you in your decision-making. And it’s loaded with some books that are lined up to be huge hits!

These lead-in stories are often great introductions that won’t necessarily be reprinted in the issue #1’s that follow. This one has all-new stories for Loki: Agent of Asgard, Silver Surfer, Black Widow, All-New Invaders and Avengers World. If nothing else, this will make putting together your updated pull list a little bit easier. 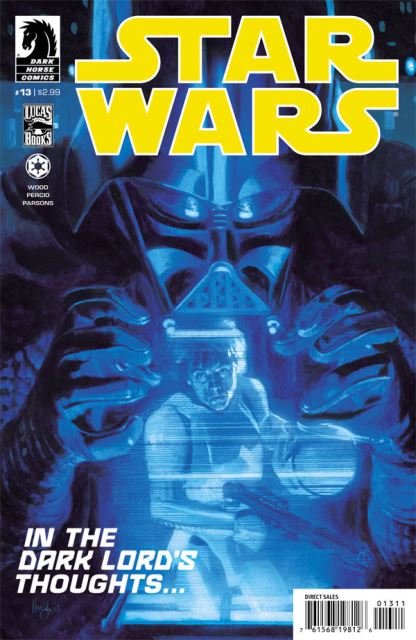 Star Wars #13 – The next story arc in Brian Wood’s Star Wars masterpiece begins here! Darth Vader’s obsession with Luke Skywalker is growing and this issue is going to take that up a notch with Vader’s new elite stormtroopers. And after suffering a pretty horrible defeat at the end of the last story arc, he’s not going to be playing things so quiet anymore.

Facundo Percio comes in on pencils starting with this issue and his style fits so seamlessly with what’s come before, most people might not even notice the change. And given the preview pages, it looks like fans of classic-look Darth Vader are going to be really pleased. As are those who love detailed backgrounds. If you haven’t given this one a shot yet, this might be as good a time as any to jump onboard. Though, with Marvel announcing that the Star Wars titles will return to them in 2015, even this amazing title’s days are numbered.