As the new year begins, it’s time to look forward to the potentially bright future. Last year was one amazing year in comics and 2014 stands on the cusp of surpassing it. But what kind of things should we be looking for out of the major publishers? Russell has a few ideas and there are several big things we already know about. For the next few weeks, the New Hotness Special Edition will explore the major comic book companies February-April solicitations and speculate what it means for the rest of the year. Read Part 1 here. Next up…

Lots of things are happening in the wake of Infinity, including the launch of several new titles. Specifically, Avengers World is really building on what Jonathan Hickman accomplished with Infinity. Lots of big sequences and giving the spotlight to characters who might not otherwise get it. Who would have though Hyperion, Smasher, Cannonball, Shang-Chi, Starbrand and Sunspot to be the standouts in anything? The B and C squads are finally getting some real attention. And with Nick Spencer as a co-writer, the dialog is really punchy and full of subtle sarcasm. And having a co-writer should keep Hickman from getting too bogged down. He’s still got work outside of Marvel going on, too.

On a bit of a silly note, Deadpool is getting married in April?!? Yeah, honestly did not see that coming. While the story may wind up being a bit of a red herring, that cover image is truly something. It’s even been submitted to Guinness World Records for number of characters used. The idea was originally just a one-off gag, but has been turned into an actual event in the title so this may or may not be something that sticks around for at least a little while. Wade Wilson’s bride-to-be was revealed to be Shiklah, who was originally supposed to marry Dracula in Gerry Duggan & Brian Posehn’s Deadpool: The Gauntlet Infinite Comics series. Dracula’s reaction to this pairing probably won’t be so great and it may not last long. If anything, you’ll want to grab the issue with that wrap-around cover. It’s going to wind up a collector’s item.

A major happening any Marvel fan should be keeping track of is that Wolverine no longer has a healing factor. A brand-new Wolverine #1 just dropped this week and the new status quo certainly makes things more tense. Without his healing factor, Wolverine has to relearn how to defend himself, but he’s still Wolverine meaning he’s going to take crazy chances. Paul Cornell is still writing Wolverine after launching a brand new series just over a year ago in Marvel NOW! phase one, but this new series is leading to something big in September. Cornell has hinted heavily that Marvel might actually be willing to pull the trigger on actually killing the most popular X-Man off. Considering they allowed Peter Parker to die and stay dead for over a year, why wouldn’t they take this chance, too?

What looks to be the sleeper hit of Marvel NOW! Phase 2 is Dan Slott’s Silver Surfer in March. Aside from the seemingly tailor-made-for-this-sort-of-thing art style of Mike Allred, the tone of this one seems straight out of Doctor Who. No more Galactus-heralding for Norrin Radd, just exploring the universe taking on crazy cosmic adventures with a kindred spirit along for the ride. Given Slott’s love of The Doctor, this is one that should be lots of fun for fellow Whovians. 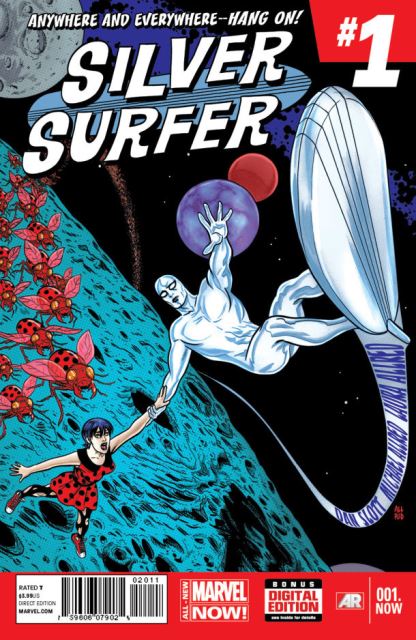 Speaking of Dan Slott, he and Humberto Ramos are bringing back the original (and best!) Spider-Man when they kick off a new volume of Amazing Spider-Man in April! Of course, anybody who’s been paying attention could have told you this was going to happen. The Amazing Spider-Man 2 is scheduled to hit theaters May 2, so it only makes sense that Marvel would want to capitalize on that. What better way than to have a brand new #1 featuring the return of Peter Parker?

Sadly, this likely means the end of Superior Spider-Man, which has been a blast since it started. Hopefully the events of Superior will radiate through this new volume of Amazing and keep the level of fun Slott has injected into the Spidey mythos. This still begs the question of what happens to Doc Ock. He’s one of Spidey’s greatest villains so I don’t expect him to be gone forever. Maybe he can haunt Peter’s mind much in the same way Peter haunted him. That’d be an interesting voice for Peter to have in his head. 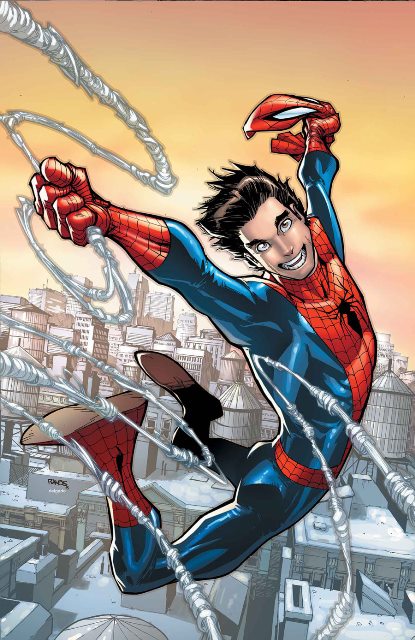 Two other solo series nobody should be sleeping on are Black Widow and The Punisher, both written by Nathan Edmondson. Black Widow is already making a huge impression and is being called by some (me included) the perfect companion book to Matt Fraction’s Hawkeye. Its third issue just dropped this week, so there’ no reason not to go catch up. While you’re at the local comic shop or on your tablet, grab The Punisher #1, also out this week. Moving Frank Castle to the West Coast is a brilliant move to breathe some new life into the character and Edmondson’s penchant for writing strong silent, introspective types is a perfect fit. Oh, and the action scenes are exactly what you’d expect for a guy who calls himself The Punisher.

X-Men fans have a lot to be happy about this year, too. There’s the continuing hits All-New X-Men from Brian Michael Bendis and X-Men from Brian Wood, but it’s the return of Chris Claremont to the X-verse that should get us all excited. He’s writing an all-new ongoing Nightcrawler series following the character’s return to life in the pages of Jason Aaron’s Amazing X-Men (appropriate name given how awesome it’s been so far). If there’s any writer out there who knows Kurt Wagner, it’s Claremont. This series stands to be a major hit if fans are as ready for a new Nightcrawler series as they should be. 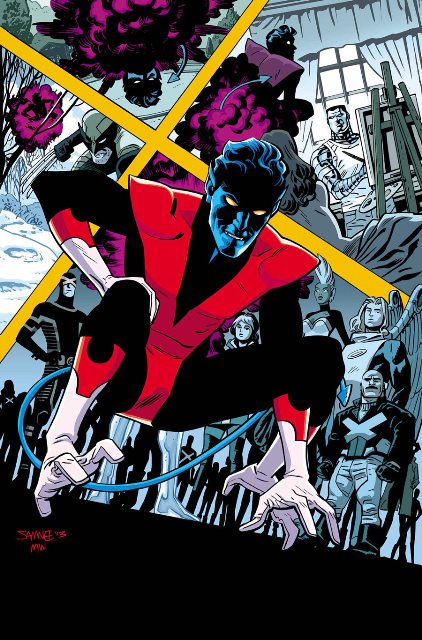 Some new characters are coming on the scene, too as Marvel is introducing an all-new Ms. Marvel in a new solo title. Issue #1 came out this week and is exactly what those missing the (sadly) canceled Young Avengers need. Relative newcomer and New Jersey native G. Willow Wilson is giving this new Ms. Marvel, aka high school student Kamala Khan, a great and fresh voice. Since she’s coming along at the same time as the new Inhuman series it wouldn’t be surprising to see her show up there, too. It’s not unreasonable to think that she could show up in another young heroes series, New Warriors, as well. Definitely give this one a look if you’re looking for something outside of the standard Marvel titles.

There’s something ominous coming for The Watcher this May from Jason Aaron and Mike Deodato Jr. in a new event called Original Sin. Given the teaser images released so far, it looks like Uatu is going to meet his end this year. With a creator like Aaron on the project, this one should wind up being really entertaining and epic in scope. And for the death of such a major character, it should be nothing less. And it looks like Aaron is adopting a more “DC” way of doing things with this event. The main story will be kept in its own title with tie-ins focusing on the fallout and impact on the larger Marvel Universe. 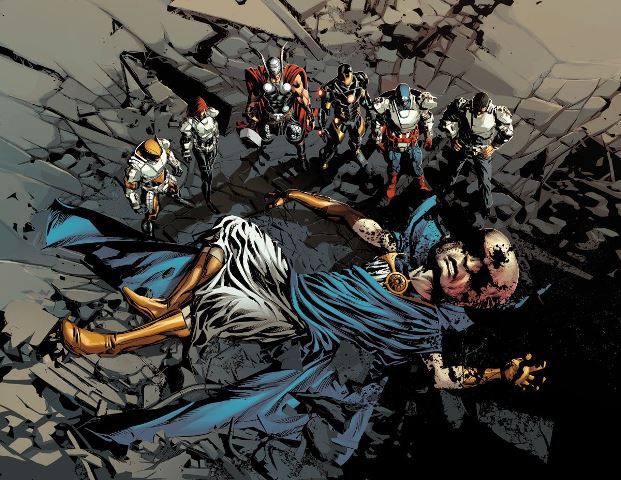 Charles Soule is an increasingly busy man these days. Aside from running a law firm, he’s also writing Superman/Wonder Woman, Red Lanterns, Swamp Thing, Thunderbolts, Letter 44 and now he’s taking over Inhuman from recently-departed writer Matt Fraction and launching an all-new She-Hulk series. Inhumanity as a follow up event to Infinity hasn’t been the most amazing thing ever, but pretty much anything Soule writes becomes pure gold. If anything, issue #1 has just become a must-buy for anybody who likes good comics, superhero or not. His law background and the history of Jennifer Walters as a lawyer makes him the perfect candidate to take on a new round of She-Hulk.

Mark Waid is also quite busy these days, but not too busy to shake things up for Daredevil and Hulk as he launches new volumes for each of them this March and April, respectively. Things haven’t gone so well in New York for Matt Murdock, so a move out west is a chance to start fresh. But there’s no way it’s going to be that easy. Waid’s historic run on Daredevil is continuing a little longer and that’s the best 50th birthday present old Horn Head could ask for. And things aren’t any easier for Bruce Banner since he’s been targeted for assassination. If the solicitation for Hulk #1 is any indication, Banner may be out of the picture for a minute while Hulk takes the opportunity to smash…if he can figure out how to get free of Banner’s unconscious mind, that is.

Also worth your time and money will be Jim Starlin’s return to writing the character he created, Thanos, in Thanos: The Infinity Revelation. It’s been 10 years since Starlin did any work at Marvel and anytime this legend comes around, you should be paying attention. He’s both writing and drawing this original graphic novel and the teaser art released in December looks as slick as ever. No official release date has been announced yet, but it’s likely to be just in time for the Guardians of the Galaxy movie this summer, which is drawing several pieces from Starlin’s past work. Nobody has done better work on the Guardians or Thanos, so if you were curious to learn more about that big purple guy in the Avengers post-credits scene (whoops, spoiler alert!) this might be a good way.