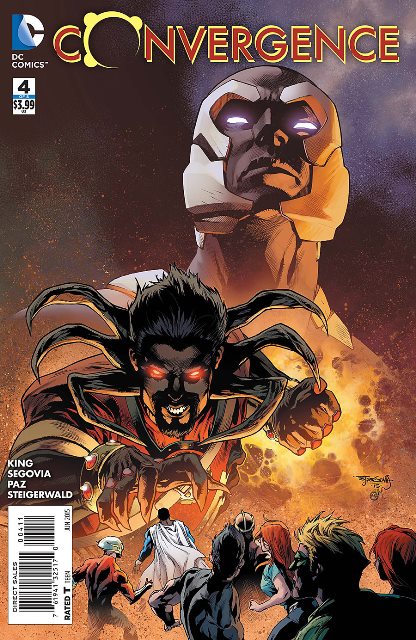 Written by Jeff King
Art and cover by Stephen Segovia
$3.99

It’s been a rough go of things for Convergence so far, but this issue starts to show some signs of life for the story. King’s script is still suffering from lack of character differentiation, but at least his story is starting to come into sharper focus.

The issue actually reads much better if the narration boxes are largely ignored. The dialog and art do plenty to move things forward. Dick Grayson was left paralyzed at the end of the last issue, but Telos showed up to pretty much take care of that. For some still-unexplained reason he needs Grayson to point the way to the Earth 2 heroes. But that’s hardly the main focus of this issue.

Our other heroes are still being led by Deimos into the heart of Skartaris. The truth about Deimos is slowly coming to light as he advocates for killing pretty much everyone in his way. Superman gives the same speech about not killing unarmed people twice, though that still doesn’t seem to jive too well with his character who has been established as a pacifist with only extreme exception made for that.

Still, it’s pretty cool to see Warlord getting a bit of panel time and proving to be the actual hero of this particular world. Telos and Grayson continue their journey together and they watch several worlds battle each other along the way. Grayson tries appealing to Telos’ emotions and presents him with the idea that he could simply refuse Brainiac’s programming. That doesn’t work out at all, as was expected.

Back at the fight for Skartaris, the heroes continue to fight but their distrust of Deimos continues to grow. In the lower levels of the main castle, Shakira (again, not that one) is trying to force the Time Masters to fight for Warlord. It’s about this time that Deimos has found his way into the room and after he’s confronted by Yolanda about his devious nature, he turns on her and reveals his true nature.

We check back in with Grayson and Telos one more time and it’s pretty much the same conversation again complete with predictable results. But, now Telos “senses” the heroes and grabs up Grayson for the trip.

What Deimos reveals about the Earth 2 heroes is actually pretty interesting here. He reveals that the heroes are the “original heroes reborn.” Deimos taps into the power of the Time Masters in order to execute his master plan. He plans to barter with Telos by revealing where Brainiac has been all this time. He’s imprisoned in time and only Deioms has the power to release him. Brainiac promises to give Deioms whatever he wants in exchange for freedom.

So that was a pretty big revelation about the heroes and about Brainiac’s current predicament. And if you picked up Justice League #40 last week (and you REALLY need to), you know that Brainiac’s little experiment here is only one part of a much larger event. The ramifications for what’s coming next is laid out a bit more clearly here and the pacing this time around was much more consistent with far less wasted panel time. Sadly the narration boxes still take away from the enjoyment, but skipping them helped a lot.

The art continues to shine and help to elevate what would otherwise be a fairly mediocre event. Still, there are glimmers of hope as this story moves forward. Segovia’s art has found its footing now and it’s clear he’s become comfortable with each of the characters. Good thing, too, because King is still struggling with giving each a distinctive voice. In the end, this is the first week I can honestly say I’m looking forward to the next issue. Hopefully the upward momentum continues. 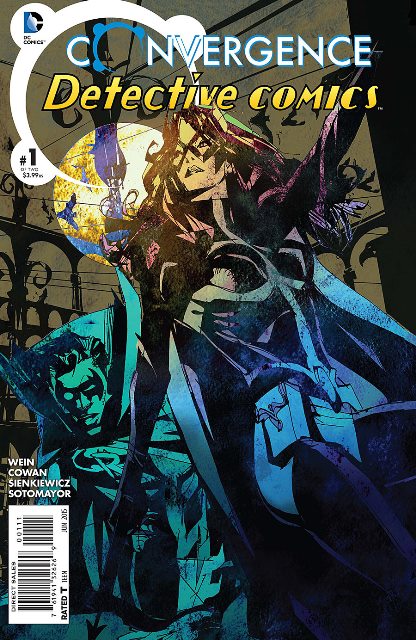 Wow, it’s really great to see a writer who can handle two vastly different worlds so well. Wein has always been an amazing writer, but his ability to transition from two different styles is amazing here. His exploration of the inner workings of the Red Son DC worlds is nearly as good as Mark Millar’s (original creator of the Red Son Superman).

The pre-Crisis Helena Wayne and Dick Grayson are perfectly written, too. They have a similar feel to their original incarnations but Wein manages to give them each a modern twist. It’s great to see them banter over whether or not Grayson should become the new Batman in the wake of Bruce’s death and his feelings that only a Wayne should be the Bat.

But what’s really amazing is how well the first meeting between these two worlds is handled. It’s incredibly unexpected and beautifully rendered by Cowan’s masterful line work. This is shaping up to be the kind of story that’s a must-read. 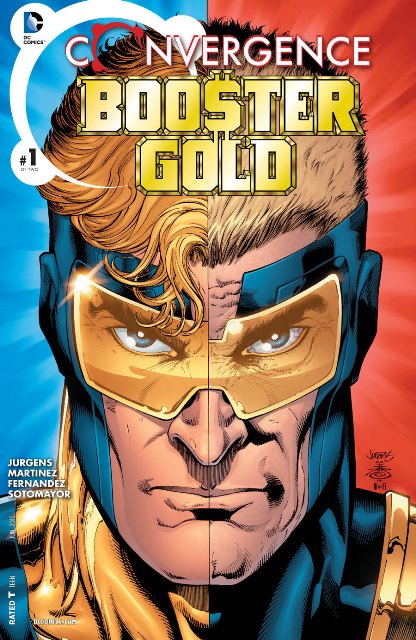 It’s so nice to see a plan come together. This story isn’t just a Convergence tie-in, it’s the culmination of a story that’s been developing since Justice League International Annual #1. Things pick up where the Futures End: Booster Gold tie-in left off with Booster trapped in Brainiac’s prison and being forced to give up the location of Vanishing Point. That is until Rip Hunter (but one from a yet another alternate universe) shows up to save him.

Jurgens handles his creation better than anyone and he manages to make the script both exciting and even funny at times. And wait until that last page. If you’re at all a Booster fan, your heart will skip a few beats. While this issue does a lot of setup and a little catchup, there’s still lots of great action to love and that’s good because Martinez’s work is right up there with Jurgens’. There are some pretty twisty time-travel issues here and there, but if you can keep up with that then the brilliance of the issue will become apparent. Hopefully there’s a white board somewhere with this all mapped out so everyone can keep up. 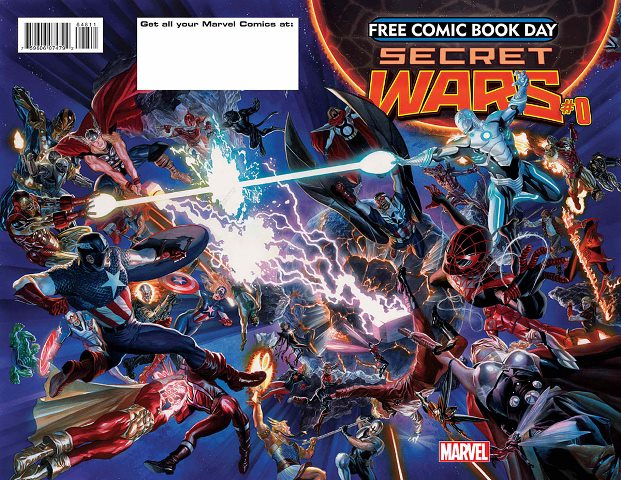 Hey, it’s finally here! Secret Wars has kicked off, though it’s not much to go on just yet. If you haven’t been keeping up with Jonathan Hickman’s Avengers and New Avengers run, this issue can be a big help. It’s told from the point of view of the Richards kids (children of Reed and Sue Richards, also called the Future Foundation). Valeria Richards has a plan to save at least some people from the coming incursion of the Ultimate Marvel Universe Earth. Unfortunately, it looks like not many people will survive what’s coming.

Valeria then spends the rest of the issue (it’s only have the issue, since there’s an English printing of the Attack on Avengers first issue in there, too) telling the rest of the Future Foundation how things have gotten to this point. This is where it’s a great and convenient catchup point for those who skipped Hickman’s Avengers and New Avengers. Although it is a bit abbreviated so some folks might still feel a little confused by the quickie version of the story.

But, the point of this short story is clear: the Earth-616 Universe is about to fall prey to the Ultimate Universe and they don’t mean to go quietly into that good night. It’s going to be a pretty amazing battle and is already off to a fairly solid start. Paul Renaud’s art is solid, though not quite as outstanding as previous issue of either Avengers or New Avengers. But if that Alex Ross wrap-around cover doesn’t blow your mind, there might be something wrong with your eyesight.

This was purely catchup and brief setup so don’t expect a lot from it. Still, it does a great job of making the stakes feel real for issue #1 this week. Looks like Marvel is on the right track to making a fun event.