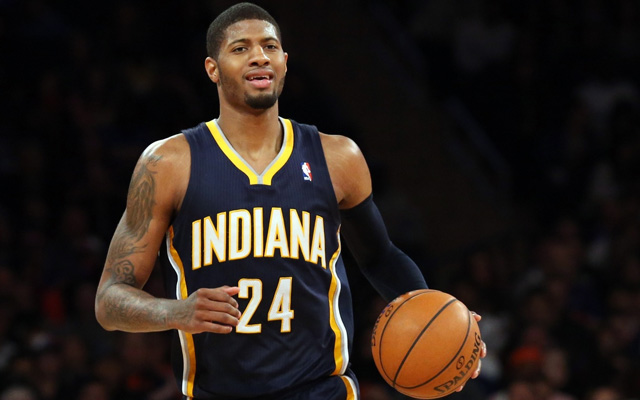 Howdy basketball fans!  The Cowboy is here to break down the first week plus of the NBA regular season.    We’re only about five games into the fray and it has already been a wild ride. Led by rookie phenom Michael Carter-Williams, the upstart, and supposedly tanking, Philadelphia 76ers improbably started the season 3-0 with wins against defending champion Miami and beasts of the east Chicago.   Despite a roster consisting of Pau Gasol, a geriatric Steve Nash, and a bunch of below replacement level swingmen; the Los Angeles Lakers are sitting at a respectable 3-3 as they tread water waiting for the Mamba to make his return.  It has been the week of the doormats as the aforementioned Sixers as well as Charlotte, Orlando, and Phoenix all sit above .500.   While it may not last, it sure is fun to see these young rosters competing at such a high level.   While these are all certainly interesting story lines, the first five games of this season have belonged to one team and one team only: the Indiana Pacers.

The Pacers have jumped out to a 5-0 start as they try to build on last year’s deep run to the Eastern Conference Finals.   Paul George appears to be making the jump from star to superstar before our eyes as he is averaging an eye-popping 25.8/8.2/4.0 while shooting .483 from the field and an even more impressive .444 from 3 point land.  George also doubles as one of the premier wing defenders in the league who is built to be the perfect Lebron foil for years to come.  While not as physically strong as James (who is?), George combines length, athleticism, and very active hands to dominate on the defensive end.  Speaking of defense, the momentum on that end of the floor that massive center Roy Hibbert generated in last year’s post season has certainly carried over.  He is averaging a whopping  5.20 blocks per game.  The Pacers roster is loaded with quality talent with playoff experience.  George Hill, David West, & Lance Stephenson combine with George and Hibbert for what is probably the best starting five in the league.  The bench, which was such a massive issue during the playoff series with Miami, appears to be slightly stronger with the additions of Luis Scola and C.J. Watson.

Watching the Pacers  so far this year, they seem to be playing with a chip on their shoulder and are absolutely dialed in for every minute of every game.  When a team goes down in such excruciating fashion as they did last year to the Heat,  things can go one of two ways: They either become mentally resigned to the fact that they are unable to beat a particular opponent and stagnate, or they do what the Pacers are doing: seethe over the loss for the whole offseason and use it as fuel to come back better than ever.  This team appears to have an “us against the world” mentality this season.   They are playing with an edge that indicates they read every preseason prediction which had either Miami or Chicago coming out of the East and seemed to put them on the backburner. This is a team that took the Heat to the absolute limit in a seven game war not all that long ago.  They are young, healthy, and hungry.   Watch out for these guys going forward.

Looking ahead, there are some great games this weekend.  Saturday night we have the Pacers traveling to Brooklyn to square off against the high-priced talent of the Nets.  The NBA did the Pacers no favors by scheduling this road game as the second half of a back to back.  Another great game on Saturday night will be a rematch of the Clippers/Rockets shootout.  The Clips took the first game in Los Angeles and the Rockets look to even the score on their home turf.  There is a light schedule Sunday highlighted by the Spurs heading to MSG to take on the reeling Knicks.  This is a huge opportunity for the Knicks to right the ship, but I don’t see it happening.