The champs are still here, John Wall is primed to break out, and… that’s about it. 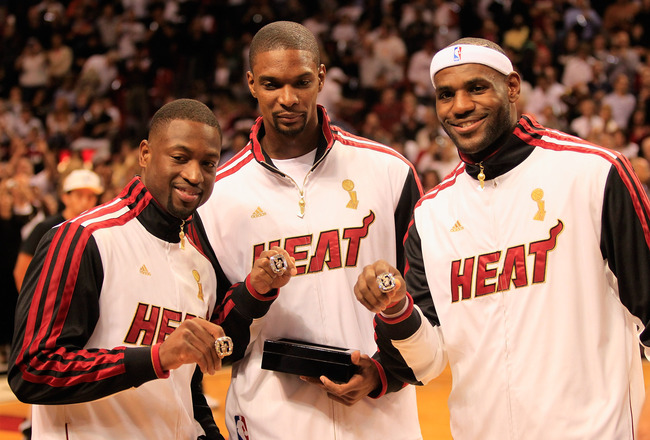 After a historic winning streak, maybe the most thrilling finish in NBA Finals history, and an epic Game 7 win over the Spurs, Miami wipes off the confetti from their back-to-back titles and tries for the three-peat, which has not been accomplished in the NBA since Shaq and Kobe were together in Los Angeles. I did not include opt-ins (which is when a player options to stay with his team in the final year of his ongoing contract) in my summary, but the Heat had a few of them with Ray Allen, Rashard Lewis, and James Jones staying in South Beach for another year. The Birdman played himself back on the team with his amazingly efficient playoff performances, and they got back into the draft to get Ennis, a strong small forward who can back up LeBron in the future. It must have been tough for Pat Riley to amnesty a loyal guy like Mike Miller, but it did make a lot of sense to save that money and let him go. The Heat got Oden on a league minimum deal, and he does fill a need for them as a 7-footer who can defend the rim and block shots. Bringing back Beasley, who was sent to Minnesota by the Heat on the same day that they scored with LeBron three years ago, is risky but he can quickly be cut if he causes trouble. Mason might not make the team, but he is a solid vet. The real fun for Miami begins in 2014 when LeBron, Wade, and Bosh can all opt out if they so choose and the contracts for Allen, Shane Battier, and Mario Chalmers are also up. If LeBron actually departs (which I doubt he will) and Riley finally walks away from South Beach, it could happen. Keyword: “Could.” 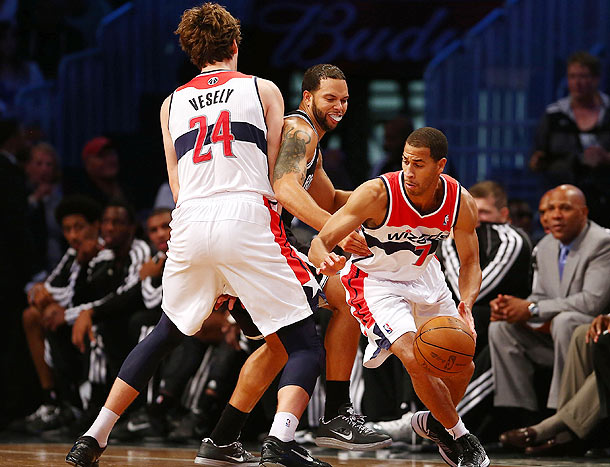 What does it say about the Southeast Division that the Wizards won less than 30 games last season and there were two teams BELOW them? Yowza! The division looks to a new season, but it will be more of the same with Orlando and Charlotte at the bottom and Atlanta seemingly in permanent mediocrity. Then there are the Wiz, who had a terrible win-loss record but showed tons of potential with the backcourt of John Wall and Bradley Beal. Beal was one of the best rookies last year, and Wall, who got an $80 million extension this summer, came on like gangbusters after sitting out the early part of the season with an injury. Add in drafting Porter at small forward, a defense that was ranked 8th in the league, and the expiring contracts of Emeka Okafor and Trevor Ariza, and you can see the signs of a playoff team coming to fruition. They played it safe by re-signing Webster, who had a career year last season after being amnestied before, and Temple, who has been one of the best D-League players in the last few years. They got another D-League prodigy in Rice Jr., so he can step in immediately and play. Harrington is very experienced but can also be a malcontent at times. Martin, Barbosa, and Collins are still available, so they could come back. Okafor will also be out indefinitely with a herniated disc in his neck.

PREDICTION: I will go out on a limb and put them in the last playoff spot on the potential of a full season of Wall and Beal playing together and the glow of being an attractive team for free agents to sign with in the summer of 2014, when the Wizards will have plenty of cap room. Remember: If the Wiz are simply better than the Hawks, Bobcats, and Magic, they’ll be second in this godforsaken division! (2nd in Southeast, 8th in Conference)

Despite that onslaught of names you see up there, what Atlanta is doing does not feel so much like a reboot as it does a refurbishing. Sure, they shed a lot of cap room after GM Danny Ferry picked up a bunch of expiring contracts in order to get rid of Joe Johnson and Marvin Williams’ terrible contracts, but under Larry Drew, they still pushed the Pacers to six games in the first round! J-Smoove is now in Detroit and Zaza went to Milwaukee, but they matched Milwaukee’s offer on Teague to keep him in town, and they kept Korver, who is still one of the best shooters in the league. Al Horford is still an All-Star caliber player, and they bring in one of my favorite players to help in the frontcourt: Utah’s Paul Millsap. Not only that, they got him at what looks to be a bargain! Brand is a one-year deal and Schroeder will learn on the job as the future point guard of the Hawks. Nogueira is going to stay overseas for next season and so is Muscala. Ivan Johnson was a nasty dude, but he is in China right now. James Johnson is a decent replacement. Antic is a solid 6’11” power forward who just won back-to-back Eurolegaue titles with Olympiacos. Don’t forget that Lou Williams will be back from a knee injury.

PREDICTION: Budenholzer has been widely respected as Gregg Popovich’s right hand man in San Antonio for over a decade, but a DUI arrest over the summer might already have the new head coach on thin ice. I am straight up giddy over the frontcourt duo of Horford and Millsap because they are both tough matchups in the paint. I am still unsure about their depth and chemistry in Year One, so I will put them out of the playoffs with just under 40 wins. (3rd in Southeast, 9th in Conference) 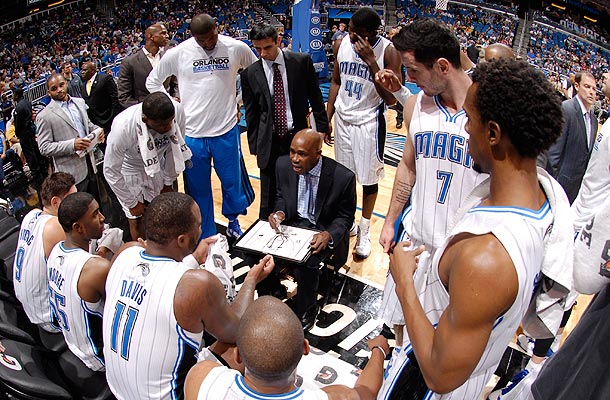 Now, we are really going down the rabbit hole of NBA standings with the team that had the worst record in the entire league last season. I have mentioned before, however, that in that mega trade between the Magic, Lakers, Nuggets, and Sixers, it may have been Orlando that came out of the other side in better shape than the others. Nikola Vucevic is an elite rebounder already and Arron Afflalo is a reliable guard to have on your side. That doesn’t mention the bright futures of Tobias Harris, Moe Harkless, and Andrew Nicholson. Maybe they are catching stats on a shitty team (or, as Kenny Smith hilariously calls them, “looters in a riot”), but maybe they will turn out to be something if you stick with them. Maxiell will give them some physicality in the paint, but the biggest pickup might be Oladipo, who got a lot of time at the point guard spot in summer league. We shall see if Jacque Vaughn wants to try that out in real games. Price is a decent backup to Afflalo and probably Oladipo too.

PREDICTION: If you go from the worst team in the league to a really bad team, it’s still an improvement, right? It will be interesting seeing which of the youngsters in their frontcourt start to really stand out next to Oladipo, Afflalo, and Jameer Nelson. The Magic won’t win more than 29 games, but that 2014 Draft Lottery is not too far away! (4th in Southeast, 13th in Conference) 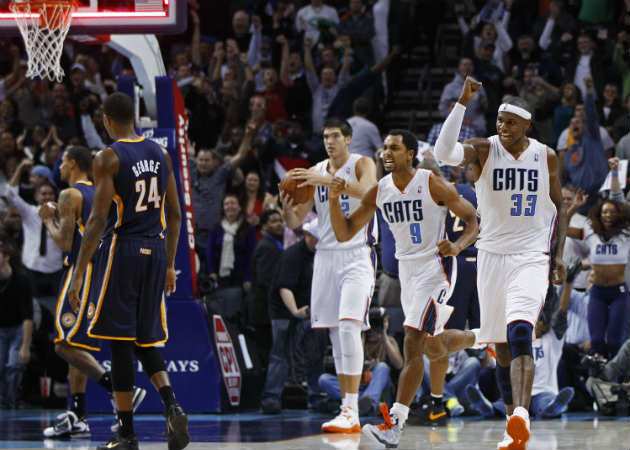 The only good move the Bobcats seemed to make this offseason, to me, had nothing to do with actual basketball: It was the announcement that in 2014 they will be changing the team name back to the Hornets, who originated from Charlotte before they relocated to New Orleans. After that, just another ho-hum, head-scratching offseason for team owner Michael Jordan. They signed a big brute in Jefferson, but at an insanely high salary for a guy who has been to the playoffs twice his whole career and is overweight. Charlotte fans will regret that in two years. Why was Jordan so obsessed with retaining Henderson, who I would not even consider an average player in this league? Hiring Clifford was an improvement over Dunlap, who had less pro coaching experience than Clifford does, but it is not a big time move. Cody Zeller impressed in summer league, but I have my doubts about his stability and athleticism at center. They did get rid of some dead weight by amnestying Tyrus Thomas. One caveat: Ben Gordon will be playing in his contract year, so I expect him to work harder than he has in the past few seasons.

PREDICTION: The only coach that got the Bobcats to the playoffs in its short history has been Larry Brown, and Jordan fired him in 2010. And he has fired two coaches after Brown. Their best player after Jefferson is probably Kemba Walker, who is still a work in progress. So is Michael Kidd-Gilchrist. By the time we are actually talking about this team with optimistic tones, they won’t even be called the Bobcats anymore. (5th in Southeast, 14th in Conference)