The Doc is in for Lob City, the Warriors bank on small ball, the Suns are a dumpster fire, and the Lakers are… rebuilding?

I mentioned earlier this month how difficult it is for coaches to keep their jobs in today’s NBA when three coaches who won 56 games or more this season got fired after the playoffs were over. On this occasion, it was Vinny Del Negro, who reportedly was not respected by the players and quickly got on Chris Paul’s shit list after the Clippers were eliminated by the Grizzlies in the first round. The Clippers submitted to Paul’s demands and got Doc Rivers to leave the Celtics, who were about to rebuild, to try to win a title with the Clippers. How ironic that Rivers, the coach who challenged the Lakers in the NBA Finals in 2008 and 2010, is now L.A.’s only hope at winning another ring with the Clippers. Paul quickly shut it down and re-signed after Rivers was in the bag. Hmmm. Redick is a terrific shooter, although he slumped last season, and his defense has improved. Dudley has great energy and also make outside shots. Bullock can also (whattya know?!) make three-pointers and play some D. Do I smell a trend here? Collison will back up Paul just like he did when he was a rookie in New Orleans. Mullens got brutally criticized for basically sucking as a big man in Charlotte, so maybe a change of scenery will be good for him. Or maybe it won’t. And has anyone mentioned to the Clippers that Antawn Jamison is cursed? Every team he goes to falls apart!

PREDICTION: They won the division last year with Del Negro, who was borderline incompetent as a head coach, so you know Rivers has his eyes set on winning the West this upcoming season. It all comes down to what kind of defense and togetherness Rivers can insert in L.A. and if he can duplicate what he did in Boston. Blake Griffin and DeAndre Jordan reportedly disliked Paul’s brash leadership, so we will see how that pans out. One way or another, I see the Clips repeating 57 wins. (1st in Pacific, 3rd in Conference) 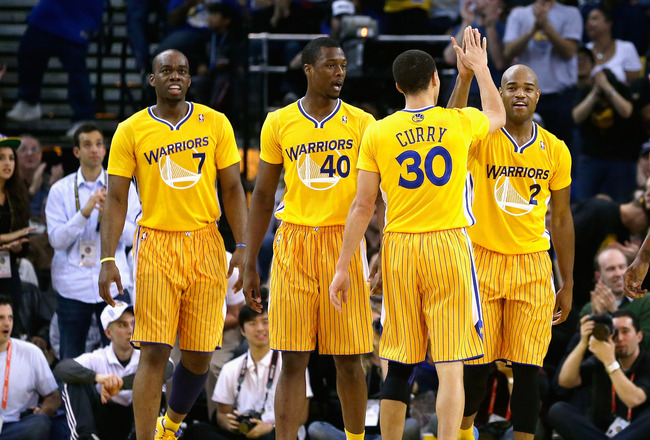 What a difference a couple of years make. Remember last year when the Sports Guy wrote this scathing piece about the Warriors tanking games and abandoning their fan base? Well, forget about all that! The Warriors improved vastly this past season as Steph Curry had a career year, Klay Thompson became one of the best shooters in the league overnight, Harrison Barnes exploded in the playoffs, and Andrew Bogut rediscovered his game a year before his contract is up. They lost to the Spurs in six games in the second round, but Mark Jackson’s team was so hot to trot in the offseason that even Dwight Howard listened to their offer even though it was a weird fit and it was financially difficult to pull off. Instead, the Warriors got a case of “If you can’t beat ‘em, join ‘em” as Iguodala signed up with Golden State after they had eliminated him in the first round. Unlike with Denver, Iggy’s athleticism and ability to create from the wing is a good fit at The City. They had to give up Landry and Jack, who were great leaders for the Warriors all season long, but they are better off saving their cap space for the future. O’Neal and Speights are big bodies to go with Bogut and Festus Ezeli, as their interior defense did need help. I still have no clue how they convinced the Jazz to take Biedrins and Jefferson’s terrible game and terrible contracts, but good for them. Toney Douglas is energetic and hustles on defense. Nedovic will play overseas this upcoming season. I love Ezeli, so him being out until the new year with knee surgery might hurt them.

PREDICTION: I don’t know if they are going to win the Western Conference, but they are definitely going to be the most fun team to watch next season. Curry, Thompson, Iguodala, Barnes, David Lee, and Bogut in a crazy, quick shooting offense? Yes, please! I see more than 50 wins, but they stay put in the rankings. And if they play as well as the Warriors’ summer league team did, then fans are going to be really happy. (2nd in Pacific, 5th in Conference) 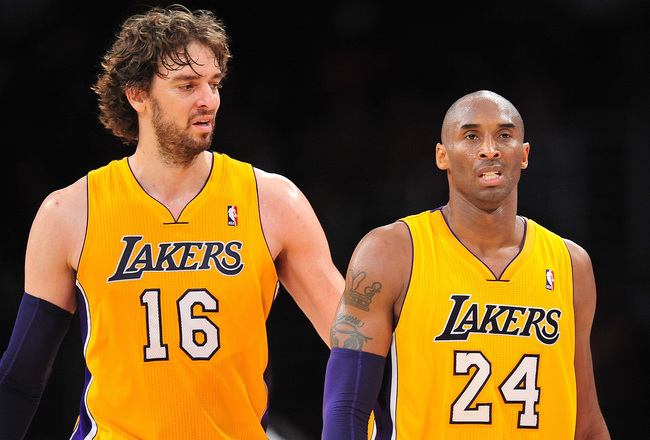 If you thought you were let down last season, Laker fans, then brace yourselves. When Howard turned his back on Hollywood in favor of what Shaquille O’Neal hilariously called “a little town,” people were not sure what the Lakers were going to do for Plan B. Mitch Kupchak basically did some makeshift moves like bringing in Kaman as the center, amnestying World Peace, and bringing in Young and Farmar at the guard spot. It seems like their master plan will not be unveiled until next summer when the Lakers take the gigantic contracts for Kobe Bryant and Pau Gasol off their books in hopes of bringing the next Hall of Fame superstar to Lakerland. Hence, here come the cavalcade of rumors that LeBron and Carmelo are being eyed by Kupchak for next summer when their contracts are up. So basically the Lakers are in a holding pattern this upcoming season with fans who demand excellence, and it won’t be anything nice if they miss the playoffs. It is no guarantee that Kobe will even be back in the first month of the season given that he is recovering from a torn Achilles. They will also miss Earl Clark, in a weird way. And what does Steve Nash have left in the tank at his age?

PREDICTION: Unbelievably, the Lakers this year are taking a backseat to the Clippers as the hottest ticket in town. On paper, even with Bryant and Gasol, this team looks mediocre at best. If Kobe gets THIS team to the playoffs, then they need to put him in the Hall of Fame tomorrow. But I will predict that for only second time since 1994, the Lakers will miss the postseason (3rd in Pacific, 10th in Conference) 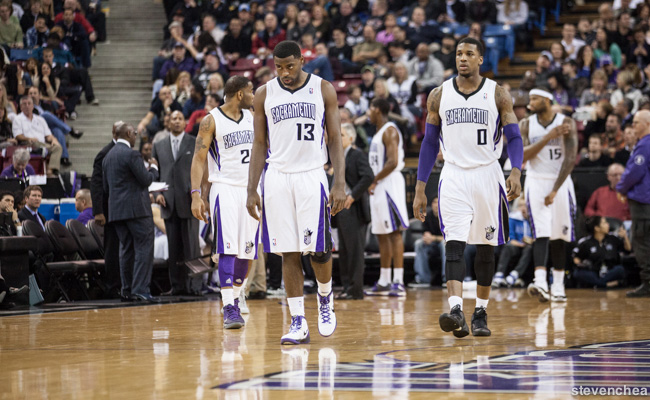 Todd Weber of the great PTBN series Weber Has Issues is the biggest Kings fan you will ever meet and it was painful to read his monthly sentiments about the unforgivable travesty that the dumbfuck Maloof brothers tried to pull in Sacramento by purposely tanking the team and selling off the team to the highest bidder, which wound up being a Seattle businessman. Thankfully, the city of Sacramento (and Vivek Ranadive’s money) pulled through and convinced the relocation committee to kill the Seattle deal and keep the Kings where they belong. Weber must have felt good that day. Gone are the Maloofs and their longtime GM Geoff Petrie, who was replaced by Pete D’Alessandro. D’Alessandro’s first move was to hire Mike Malone. I love Malone, who coached under Mike Brown at Cleveland, Monty Williams in New Orleans for a year, then helped Mark Jackson make the transition as the head man in Golden State. He is a worthy hire, but he and D’Alessandro have their work cut out for them thanks to the total mess the Kings were left to be by the Maloofs. They signed Landry, whom Malone is familiar with in their New Orleans days, but he will miss three to four months with hip surgery. They brokered trades to get Vasquez, who was a league leader in assists, and Mbah a Moute, who is a dependable defender. McLemore fell into their laps in the draft and he had some moments of brilliance in summer league. McCallum is a good run-of-the-mill point guard off the bench. The next step was to sign up maligned-but-talented big man DeMarcus Cousins to a four-year extension. I am sure that new minority owner Shaquille O’Neal will be working with Boogie on his post moves and newly hired office assistant Chris Mullin will work with McLemore on that shooting stroke.

PREDICTION: Although the relocation actually went down in the case of the Sonics going to Oklahoma City, the first season the Thunder had (where they were an abysmal 23-59) will be somewhat similar to what the Kings will go through in the first season under local ownership. Malone will do what he can to fire up the team, but losing Evans might be tough. I also expect Cousins to put up All-Star level numbers, but not too many wins. At least they will be better than the friggin’ Suns. (4th in Pacific, 14th in Conference) 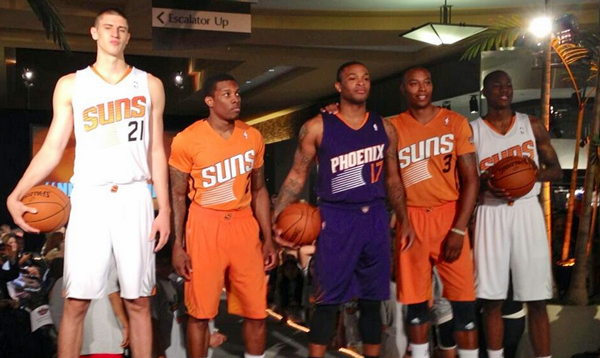 What in the blue hell is this thing they are calling the Phoenix Suns? I said in my draft preview that although their record was the third worst in the league, this was the worst team I saw last season. They were 21st in offense, 26th in defense, 26th in attendance, and 1st in eyesores. Lindsey Hunter was the interim coach after Alvin Gentry got out of Dodge, and now the new victim of this horror story is Jeff Hornacek, who played for the Suns but previously was an assistant coach with the Jazz. Dudley and Scola, two of their top four scorers, are gone. Bledsoe was picked up in a trade, but they already have a smaller point guard in Goran Dragic, so that is a mess from the get-go. Green and Plumlee were brought back for Scola, who was by far their best low post scorer. That leaves your frontcourt with Miles Plumlee, the Morris twins, Marcin Gortat and Alex Len, who suffered a leg injury before he was even drafted. At least that walking weed plant Michael Beasley is gone now. Frye is an experienced center with shooting skills who missed all of last season to fix an abnormal heart condition.

PREDICTION: If you are a cynic, it will be something to watch the Suns, Bobcats, Magic and Sixers try to outsuck each other for the most ping pong balls in the highly anticipated 2014 Draft Lottery. For me, Philly and Phoenix take the cake next season in awfulness. I’d say that Steve Nash and Charles Barkley are rolling over in their graves, but they’re not dead yet. Robert Sarver should be ashamed of himself. (5th in Pacific, 15th in Conference)