A Thunder without Westbrook, the Nuggets try gettin’ tough, Minnesota is all about Love, and the Jazz are starting over 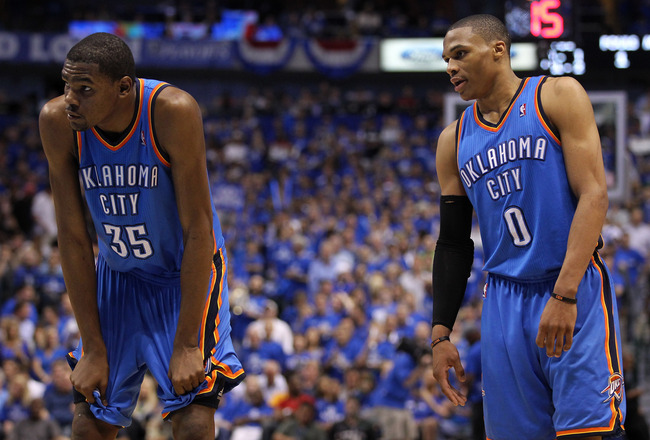 The Thunder were the only team other than the Miami Heat to win 60 or more games in the regular season last year, and seemed destined for a rematch with Miami in the Finals. Then Russell Westbrook got injured by Patrick Beverley of the Rockets in the first round of the playoffs, costing him, and the Thunder, a shot at repeating as Western Conference champs. Now Westbrook is recovering from another knee operation and will miss the first month or so of the regular season, so the ship might be shaky for OKC in the early going unless Durant dominates (which he just might). The Thunder had a lot of draft picks and used all of them, but played it safe in free agency. Jerrett is a stretch 4, Roberson can rebound, and Adams is very raw but has a lot of height on him. I know nothing about Szewczyk, Gomes might not make the team, and Fisher is a great locker room leader. The one parting shot is the fact that Kevin Martin leaving OKC without compensation officially makes the James Harden trade a failure on GM Sam Presti’s part. Now, it is up to Jeremy Lamb to prove that the Thunder got some sort of value out of letting an All-Star guard in his prime go to Houston. Presti also refuses (stupidly) to amnesty Kendrick Perkins, who has really bottomed out as a center. Look at the bright side: The Thunder still won 60 friggin’ games without James Harden! If Westbrook doesn’t get hurt, do they defend their Western Conference title against the Spurs? Who knows?

PREDICTION: When you have Kevin Durant, the second best player in the world, and Westbrook, maybe the most athletic guard in the world, on your side, you have to like your chances. But I do smell a big move at the trade deadline to get another All-Star in Oklahoma City for a title run (1st in Northwest, 2nd in Conference) 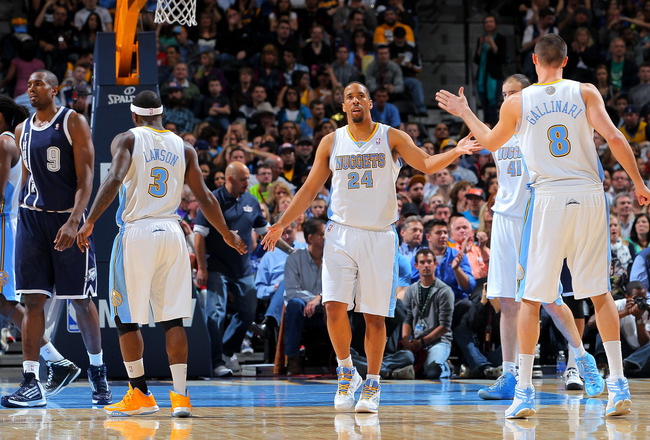 When Masai Ujiri bailed on Denver to take the Raptors job after the Nuggets lost to the Golden State Warriors in an entertaining first-round series, new GM Tim Connelly wasted no time throwing his weight around. When Karl tried to renegotiate his contract for a Richer deal (like Lionel Hollins did), Connelly shockingly fired him. I am not a George Karl mark, but that seemed really rash and not well thought out. Replacing him is Brian Shaw, who did wonders as an assistant for the Lakers and Pacers but inherits a team that lacked toughness and defensive smarts. Shaw can provide those two traits along with players Robinson, Hickson, and Arthur, who all have some grit in their game. How this style meshes with the free-wheeling philosophy that Karl enjoyed at Denver is anyone’s guess. Gallinari has become a terrific player, but he suffered a knee injury in April, so he will not be ready for camp. Foye is a good backup to Ty Lawson. I did not expect Iguodala to re-sign with Denver (he was a bad fit anyway), and losing Brewer and Kuofos might sting a little bit. Their two draft picks (Erick Green and Joffrey Lauvergne) will both be playing overseas next season. The team basically kept the status quo with only 3 of the 15 players on the roster last year being subtracted.

PREDICTION: I am definitely not expecting 57 wins. The team still has a bunch of talent like Lawson, Gallinari, Kenneth Faried, and the enigmatic Javale McGee, but will they click with this new tough-minded persona the way they did under Karl? I smell trouble in the early going. Thankfully for them, every other team in the division outside of the Thunder got worse. (2nd in Northwest, 6th in Conference) 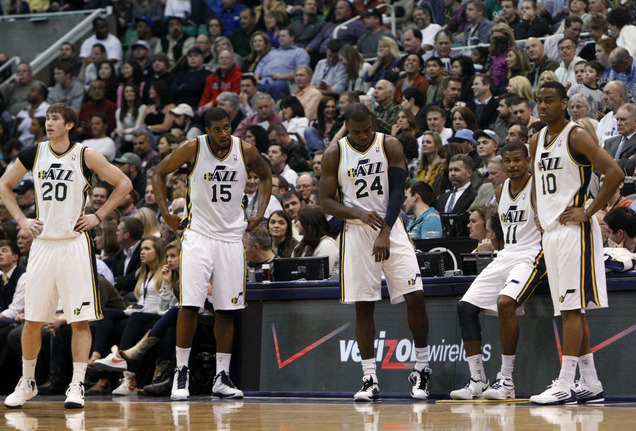 The only reason casual fans were even paying attention to the Utah Jazz last year was to see if they could actually take the last playoff spot from the underachieving Lakers, and they didn’t. After falling short of the playoffs a year after being swept by the Spurs in the first round, the Jazz gave up on the Millsap/Jefferson frontcourt in order to start fresh with the Derrick Favors/Enes Kanter one that they have been grooming for the past two years. Now is their time along with rookie Gobert, who is just a gigantic dude. Out are all those little guards Ty Corbin had to give the ball too (Williams, Foye, Watson, Tinsley) and now he has two new little guards in Lucas III and Burke, who won the Wooden Award at Michigan. Burke showed flashes in summer league but seemed overwhelmed at times and will miss the start of the season due to a broken finger. Neto will play overseas for one more year. They did Golden State the favor of taking on three contracts that will expire next season. Of the three, I expect Rush to get the most playing time. Marvin Williams opted in on his shitty contract, but he’ll be gone after next year, too. Of the five leading scorers, the only one coming back is Gordon Hayward. I heard rumblings that Hayward really impressed when he tried out for Team USA in the summer. Clark was a total surprise in summer league after playing at Belmont, so he is an inspiring story. The Jazz are going to need Alec Burks to step up at shooting guard or step aside. He claims he has added six inches to his vertical, which now gives them two dunkers who haven’t proven shit in actual games: Burks and Jeremy Evans.

PREDICTION: This is the only team in the West that feels somewhat like they are starting over this offseason. But like most things with the Jazz, it has a touch of class. I do not sense an ugly tankfest like I do in Philadelphia, Charlotte, and Phoenix. If they could not make the playoffs with Millsap and Jefferson, I have sincere doubts that they are going to be able to do it in this conference without them. Corbin’s job is in jeopardy, too. (5th in Northwest, 13th in Conference) 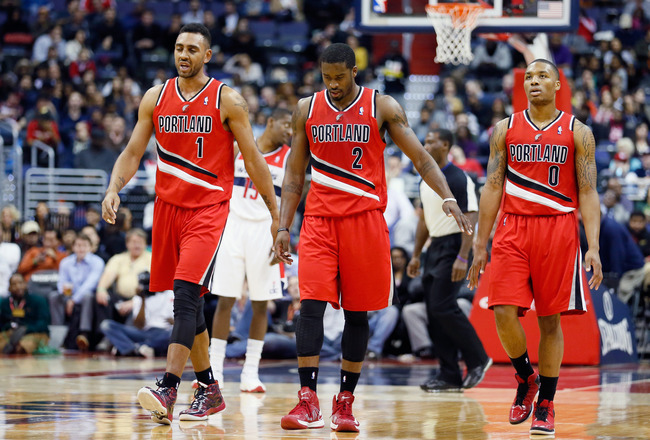 Sometimes I wonder if the Blazers are paying Bill Simmons by the word. If I got a dollar for every time Simmons writes a column praising the moves the Blazers made, I’d have… a lot of dollars. He praised Oden over Durant back in ’07 (then again, we all did) and pretty much every move Kevin Pritchard made in his tenure there, including his litany of foreign prospects that all flamed out. In 2009, in one of the best NBA Drafts in recent memory, he took Victor Claver. Right before getting fired, Pritchard passed on Eric Bledsoe and Avery Bradley to take… Luke Babbitt. Simmons finally turned on Pritchard by slamming every move he made as the Pacers GM while the Basketball Jesus took a sabbatical from Indiana. But now Simmons is back to loving him some Rip City again, and I don’t understand it. Damian Lillard had a great rookie year and is a future star, but the team’s bench was garbage and they went 10-26 after January and finished the season on a 13-game streak. LaMarcus Aldridge is miserable and wants out. They have two smaller guards in their backcourt and they sign Mo Williams and Earl Watson? I’ve seen college teams with taller guards. Wright did not stand out in Philadelphia, either. Getting Robinson for nothing was a steal, but it is curious that two teams have already given up on him despite being picked fourth in the 2012 Draft. I do like Robin Lopez going there to show Meyers Leonard what a real center looks like, but losing Hickson is a net minus. McCollum scored a lot in summer league, but another broken foot needed surgery and he is out indefinitely.

PREDICTION: This team looks like the same one I saw last year: Gets off to an okay start, then fizzles badly down the stretch when depth becomes an issue. They improved their shooting with Mo, McCollum, Crabbe, and Wright, but the frontcourt is still a gaping hole. Sports Guy, stop drinking the Blazer-ade! As long as Aldridge’s brooding misery floods the media, this team is going nowhere. (5th in Northwest, 12th in Conference)

Ding dong, David Kahn is gone, and in is Flip Saunders and his undying quest to make Kevin Love the happiest big man in the league. Good luck with that after inheriting a team with an experienced coach in Rick Adelman, but not much else. Nikola Pekovic got paid in the neighborhood of $12 million per year on his contract extension, which is not as pricy as you would expect for an elite rebounder and a solid scorer. Pekovic and Love are a great frontcourt, but Ricky Rubio has to improve at point guard next year. They got Trey Burke in the draft, then traded him for Muhammad, who looked awful in summer league, and Dieng, who I like a lot as a defensive center but still needs time to grow. Saunders bringing back Corey Brewer, whom the Wolves originally drafted, kind of stunned me and I am also surprised that Derrick Williams has not been traded yet. Kevin Martin signed a decent deal, but he played terribly in the playoffs for the Thunder. Buyer beware right there.

PREDICTION: The next season will be a long audition by Saunders to convince Love, a surefire All-Star at this point, not to leave Minnesota when his deal eventually runs out. If Love stays healthy, I can see an improvement to 40 wins, but that won’t get them in the playoffs. (4th in Northwest, 11th in Conference)