The Celtics press the reset button, the Nets go all in, the Knicks look to stay ahead in Gotham, and the Sixers are just plain awful

We are still trying to recover months later from a phenomenal NBA Finals won by the Miami Heat followed by a surprising but seemingly lackluster NBA Draft. The time period after the draft is normally full of heavy action, when free agents become eligible to sign on the dotted line and trades are put together and made official with press conferences involving six to seven-foot-tall men awkwardly holding jerseys up for the media. And this year was no different, with Dwight Howard’s escape from L.A. to the Houston Rockets being the top story on the NBA market along with a blockbuster trade between the Boston Celtics and the Brooklyn Nets.

Mega moves and shake-ups across the NBA landscape are par for the course when owners and general managers start getting bright ideas after the whistle has blown on the actual games. The Eastern Conference alone had its fair share. The Nets deal was followed by the Pistons’ signings of Josh Smith and Brandon Jennings, the Cleveland Cavaliers snagging Andrew Bynum at a favorable discount, the Indiana Pacers strengthening their roster for another playoff run, the much-anticipated return of Derrick Rose, and a series of reboots in Boston, Milwaukee, and Philadelphia.

Without further ado, here is my preview of the Atlantic Division. As usual, I will lightly discuss the rookies on each roster so for any info on those guys, look no further than my NBA Draft breakdown back in late June. 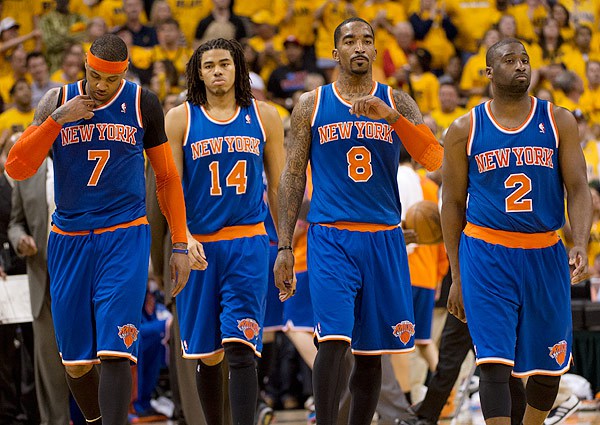 After years of trying to get better, the Knicks finally made headway with record-setting three-point shooting and a career year from Carmelo Anthony to reach second place in the Eastern standings before losing in the second round to the Indiana Pacers. Now, the talk is surrounding for Melo’s impending free agency and the contractually obligated ghost of Amare Stoudemire, who has turned into a novelty act at this point. For the most part, the Knicks stood pat by bringing Smith, Prigioni, and K-Mart back to the fold. J.R. has done himself no favors, though, by getting surgery performed after signing his contract and topping that by getting popped with a five-game drug suspension. They did make a somewhat splashy trade by getting former #1 pick Bargnani from the Raptors. It is hard to tell what Bargnani can offer in a big market like this, but he has been a great shooter in his best years and the Knicks don’t mind using that tool since they traded Novak away to get him. He is not a pure center but he can take some pressure off of center Tyson Chandler to take too many shots. If Bargnani is a wild card on the court, World Peace is a wild card, period. Lord knows what he can offer in New York except for some dirty elbows and some hilariously bizarre tweets. The Knicks would have loved the keep Copeland, but it was a weird situation where he did not have his Larry Bird rights anymore and because of limited cap space, it only took an outside team going slightly over the Knicks’ tender to sign him away. Leslie, to me, is a great find because I was shocked that he did not get drafted, so he fills a need at the power forward spot. Udrih is simply a good hand at the point guard position.

PREDICTION: Keeping status quo at certain spots is not a bad idea for the Knicks and a stark contrast to what the neighboring Nets did (more on that later), but with the improvement of the Pacers and the return of Derrick Rose in Chicago, it is going to be tougher sledding to stay second in the East. (2nd in the Atlantic, 5th in the East) 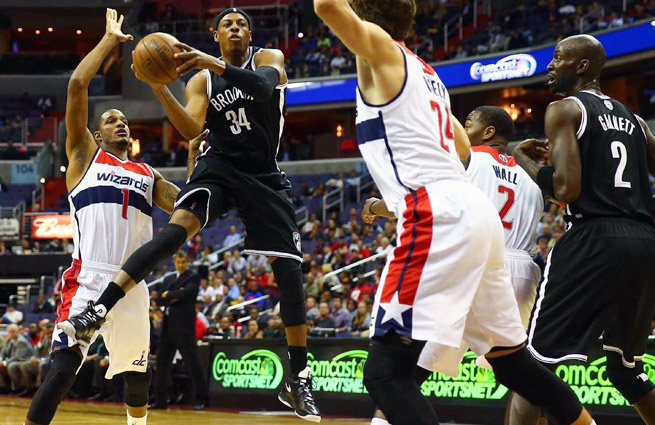 After a successful yet tumultuous season that ended in a seven-game first round loss to the Chicago Bulls, owner Mikhail Prokhorov decided to sink into those deep Russian pockets and spend his way into an attempt to go further in the playoffs next year. The Nets, on draft day, went big time and caught Boston in the midst of their fire sale with a trade that brings them two Hall of Fame players, who are past their primes but still effective, in Pierce and Garnett and a former All-Star in Terry. That same night, they drafted Plumlee. Plumlee will likely sit a lot of games thanks to Brook Lopez’s improvement and the re-signing of Blatche, who played really well down the stretch. They basically replaced Watson as the backup point guard with the decent Livingston and got a nice utility guard out of Toronto in the well-travelled Alan Anderson. Rival GMs were quite pissed that Prokhorov nabbed fellow Russian Kirilenko for what seemed like a generous markdown, but Andrei wants a ring, so it made some sense. They also got rid of Gerald Wallace’s god awful contract but had to keep Joe Johnson’s along with giving up a bunch of draft picks to Boston. Humphries was an expiring contract, but the Nets will miss the shot making ability of MarShon Brooks. Coincidentally, they hired Jason Kidd as the new head coach (rumored to have been handpicked by star guard Deron Williams) after he retired from the other New York team, the Knicks.

PREDICTION: The starting lineup for the Nets on opening night looks to be Williams, Johnson, Pierce, Garnett, and Lopez. That is quite the lineup, and a nice step up from last year in their effort to overtake the rival Knicks at the top of the division. They gave up the future to win now, and this will be Year One of that plan. Good enough to beat Miami? I’ll believe that when I see it. (1st in Atlantic, 4th in Conference) 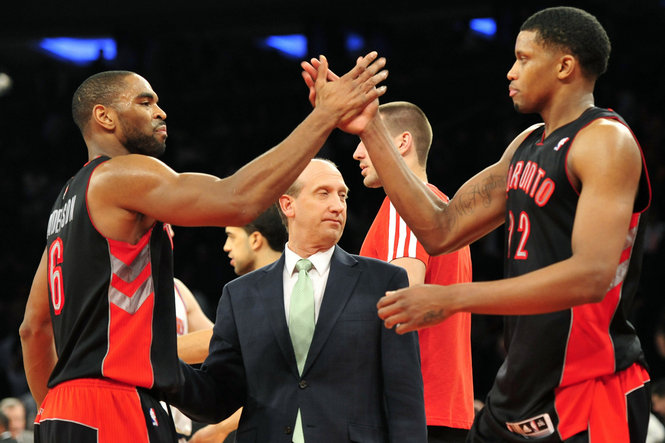 It might seem like baby steps, but after getting Rudy Gay in a trade by the previous regime, the Raptors won 7 of their last 8 games and finished 8.5 games out of the last playoff spot, a marked improvement over the first couple of post-Chris Bosh seasons. After taking on Gay’s contract, the Raps had little room (and not a lot of attractive points) to get any big names, so their best signing may have been Masai Ujiri, who did an admirable job as the GM of the Denver Nuggets before coming here. His very first move was exiling the pouty Bargnani, to many fans’ approval. He also smartly amnestied Kleiza, who is damaged goods at this point, and beefed up his frontcourt with the hardworking Hansbrough. Augustin really got exposed in Indiana, so I don’t expect much from him with Kyle Lowry there. Novak is a terrific three-point shooter, so he is a good addition. You have some ascending players in DeMar DaRozan, who got invited to try out for Team USA, and Jonas Valanciunas, who owned the summer league last month and should take Bargnani’s spot. I did like Alan Anderson, though, and they will miss him a little.

PREDICTION: I am not sold on Ujiri yet. I thought he did okay in Denver, but he did make some critical transactional mistakes in the process of gaining this wunderkind reputation. I also expect a butting of heads between the new GM and incumbent head coach Dwayne Casey, maybe even a firing in the cards if things go south. The team will try to continue their winning ways from late in the season when all was lost, but that is too much pressure for a team this inexperienced (3rd in Atlantic, 10th in Conference) 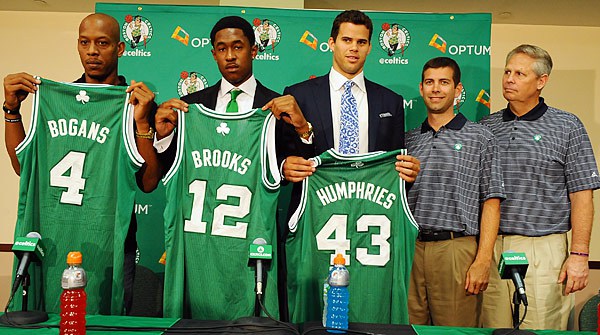 Alice Cooper might as well be talking to Celtics fans when he sang “Welcome To My Nightmare,” because that is what this season might feel like. Ray Allen left the previous summer for the Heat, and now the last portion of their championship core outside of Rajon Rondo has been shipped off in the effort of starting over with Rondo at the lead. The new head coaching hire was a shocker in Stevens, who previously coached Butler to two national title games and is a hyper-analytical type of coach. He has a great mind for getting the most out of little, but this is his first time ever coaching at an NBA level, and college coaches usually have a rough start. Not all is lost, though. Avery Bradley and Jeff Green are still there, Humphries can rebound the ball effortlessly, Brooks is a confident shooter to go with Jordan Crawford, Olynyk shined in summer league, and whatever you get out of Wallace should be seen as extra credit. Iverson is another solid rebounder, but he will play overseas next season to hone his craft. I have no clue who Fevarani is except for the fact that he is 6’11” and he played on an improving Brazilian national team. Melo did close to nothing his rookie year, so getting Greene in exchange might actually be a small upgrade.

PREDICTION: There is no denying how awful the loss of Rivers, Pierce, and KG will be. If Rondo recovers soon and starts the season with a chip on his shoulder, I can see this team competing for more than 35 wins, which might sneak them in the playoffs. I’ll keep them out of the loop for now. (4th in Atlantic, 11th in Conference) 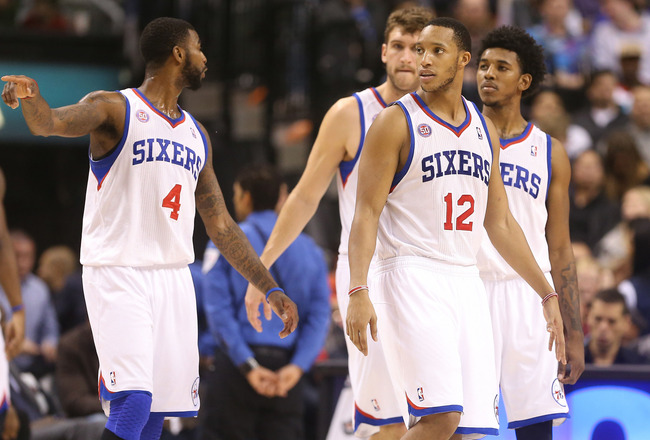 Good Lord! If the Celtics cleared the table for their reboot, the Sixers scorched the earth for theirs. They did not have too many pieces in place as it was going into last year, but a delicate situation quickly broke bad. The Bynum trade backfired as he selfishly sat out the entire season and the Sixers missed the playoffs. Collins quit before they could let him go out of frustration with the botched deal, and GM Tony DiLeo was gone soon after. Then after trading Andre Iguodala last summer, they traded their other All-Star, Holiday, to the Pelicans on draft day in exchange for Nerlens Noel and New Orleans’ 2014 draft pick. I loved that move by new GM Sam Hinkle along with getting a point guard for the future in Carter-Williams, but it won’t make this season any less awful. White is very talented, but his mental issues are well documented. J-Rich is slowly recovering from a season-ending knee injury and came to camp overweight, so who knows with him (most likely not until 2014, if at all). Wroten is also talented, but proved nothing in Memphis. The rest of the new guys are undrafted rookies with no experience. Aldemir is staying in Turkey. Hinkle is clearly tanking this hopeless season out of the future hope of having two lottery picks in one of the most loaded NBA Drafts in recent history next year. Their coaching search, which ended in August when they hired Spurs assistant Brett Brown, was one of the longest ones I have ever seen.

PREDICTION: This one is going to be rough. The team’s leading scorer and rebounder right now is Thaddeus Young. Their best rookie is out for the year. We are talking futility on the level of the 2011 Cavaliers, the 2012 Bobcats, and last year’s Magic. 25 wins would be putting it kindly. I’ll put it this way: There will be a lot of Sixers message boards live-blogging Andrew Wiggins games instead of watching the actual games in Philly. (5th in Atlantic, 15th in Conference)