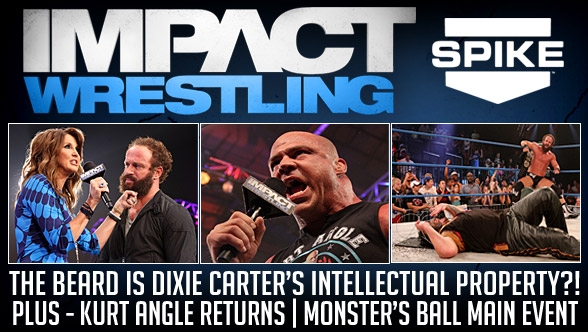 Greetings, “True-Believers.” I hope everyone’s had a great weekend. Not only was it an Easter weekend…But it was “4-20” on Sunday. And speaking of something you may need to be a bit high to enjoy…Impact had another show last week. It was the usual mixed bag of rushed storylines, solid matches, and uneven promos. I’m sure you all have your thoughts on the show…And I’ve got mine as well. So without any further ado… Let’s get to the show!

Where We’ve Been:
Last week we saw the crowning of a new TNA World Heavyweight Champion. The reign of Magnus is over, and Eric Young is your new “King Of The Mountain” heading into the Sacrifice Pay-Per-View. Also, the battle of the Beautiful People heated up as Angelina Love is the #1 contender for Madison Rayne’s Knockouts Title. Finally, the Queen of Dixieland returned and Ms. Carter is back with a vengeance!

Where We’re Going: We’re a week out from Sacrifice and there’s only 3 matches announced so far (at least on TV). Eric Young had his first title dense against his former partner, Abyss. And we saw the returns of Kurt Angle & Austin Aries.

– The Positioning Of Eric Young

Say what you will about TNA hot-shotting things by putting the title on EY, they did their best to position Young as a legit main eventer on this show. From the multiple video packages, to the comments from his peers, to his match with Abyss – EY came across as a top guy. I have my qualms about TNA rushing through what could have been at least three months worth of building up a new star…but at least they’re trying to support their new champion with strong booking (which is more than can be said for Daniel Bryan Danielson).

Each week I become a bigger fan of this guy. He’s great in the ring, has a different look, and has some of the best vignettes in wrestling right now. TNA is doing a great job at getting a guy over whose English is limited at best. This week’s video was almost as good as the one from a few weeks ago featuring the Great Muta. It showed Sanada getting up at Zero-Dark-Thirty to run. Sanada spoke (through subtitles) about the challenge of living up to the legacy of Muta and being the ambassador for Japanese wrestling in the States. Good stuff.

– The Return Of Kurt Angle

Angle’s not a big difference-maker at this point in his career, but it’s always nice to see your Olympic Hero back on TV.

I really enjoy both of these workers in the ring. I think this is a fresh and interesting feud. I’m actually intrigued by the X-Division again. So why is this bad?  Because the first two matches of the series didn’t last longer than 10 minutes…COMBINED. Lord knows Impact could use one or two long matches every episode, so why not put your X-Division guys in that spot? If they choose to conclude this feud at the PPV, hopefully they give these guys a chance to shine.

I don’t want to incur the wrath of Mr. Willow (do I qualify as a “dirty sheet” writer?), but I think my patience is running out with this gimmick. I just can’t take anything this character does seriously. To make matters worse, I think he’s dragging ECIII and Spud down with him.

Full disclosure, I’ve always been a mark for Dixie Carter. I know she’s not the greatest owner or visionary in the world. I know she’s not the greatest promo ever. I know she’s annoying to some fans. But God bless her lil’ ole southern heart…I’m never bored when she’s on-screen. But this segment was just a chore to get through. Not only did she try to take credit for Daniel Bryan Danielson’s beard movement (which I think both DBD & EY stole from former SF Giant Brian Wilson), but she completely made the champion look like an afterthought. Throw “Baby Ray” into the mix, and this was probably my least favorite non-Willow moment on the show.

Final Thoughts: TNA has found itself in a bit of a rut lately. Impact isn’t terrible…but there’s just not a lot of forward momentum. My biggest issue with the company right now is the lack of patience when it comes to setting up quality storylines and angles. They’ve burned through some solid work from guys like James Storm, Gunner, Sanada, and The Wolves. The hot-shoting and fast-forwarding of what should be big moments leaves you with a program where very little comes across as important. They need to start rectifying that problem after the Sacrifice PPV.

Well, that’s it for the recap this week. I hope you guys enjoyed it. As always, any feedback is welcome. Join me next week for a look at the go-home show for Sacrifice!