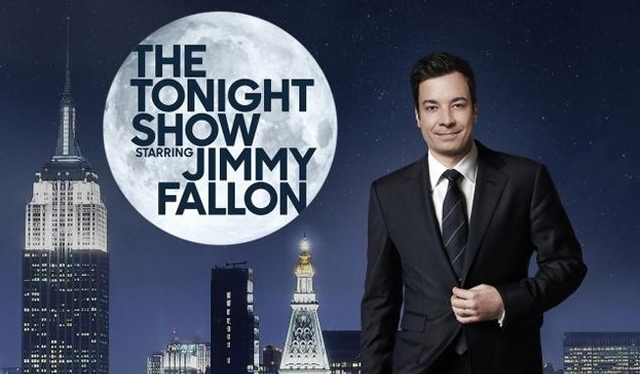 On Wednesday February 18th, 2015, I finally lived out one of my dreams to be in the audience for The Tonight Show. But first, let’s go back in time for a moment to Wednesday December 3rd, 2015.

My companions and I had tickets for the taping that evening. We had boarded the train, ventured to the city, done our routine of window shopping and enjoying the city. The date just happened to be the same as the Rockefeller City Christmas Tree lighting, you would imagine it was a hectic day in the area. Somehow, we avoided the crowd. We had made our way to NBC for the taping at the allotted time. We walked up to the page by the steps as we had for the Seth Meyers taping, ready to begin our adventure.

But then it happened. We were told the taping was cancelled.

Due to a “technical issue.” We were in a state of disappointment and shock. We had no idea what had happened or what to do next. We gathered ourselves together at Buffalo Wild Wings, and made plans to catch an early train home. It was only later that we had found out that the show was cancelled for the reason that Jimmy Fallon and his wife had welcomed his second daughter into the world that morning. I really couldn’t be mad at that, but I wished it had happened any day but ours. We closed the book….for now.

I was on break from work in my car. Early January when it was around 5 degrees outside. I timed it to be on break at the minute the February tickets on sale. They have a reputation for selling out within the first 20 minutes. But luck was on my side as I got through on my cell phone, and managed to get 4 tickets for the aforementioned Wednesday in February. I messaged the chaps, and raised our hopes that we would prevail this time. Except I had discovered that the date I picked was the day after the first anniversary of his show. (As it turns out the audience for that show received free containers of his then unveiled “The Tonight Dough” Ben & Jerry’s flavor. Shoot!)

As is the normal, the weeks preceding are filled with planning and anticipation of who our guests will be. This time, it was almost until the eleventh hour in which we found out who our main guest was. But it was worth it, as it turned out to be none other than the Sci-Fi Queen herself, Sigourney Weaver. Who happens to be one of my favorite actresses.

We spent much of our time at Rockefeller Center. We were fortunate enough to be in the vicinity of the Ben & Jerry’s when the Jimmy Fallon Facebook page announced that there would be free samples of “The Tonight Dough” between Noon and 1pm.

After our free snack, we made a venture to the Top of the Rock, where the view was breathtaking. If you’re in Manhattan and have never been, it’s the best view you can get aside from the Empire State Building. Also, and this is just a note, the “selfie stick” seems to have caught on with a vengeance. Many people were at the top floor pulling them out, and snapping candids of themselves. One could walk around and limbo underneath many a “selfie stick.” A bit of a nuisance if I say myself, but that’s just me.

After our time at the top of the rock , we hung about in the area until the time came to check in, mainly in the NBC store. As minutes went on, we figured we would try to get in a few minutes early. We approach the stairs, pull out the ticket as we had the last time…..and…..we were let in! Success!

The check in process was roughly the same as it had for Seth Meyers, where we were given wristbands, tickets and instructed to return at a given time. I’m convinced that it was the same man who gave us the instructions. Something very familiar about his Tony Soprano-esque voice.

We had made it further than we had last time, so we were excited. We return to the same TUMI luggage store where we waited for Meyers. (As you can guess, it was a near cloned experience of getting into the studio, so I’ll stick to the bullet points.)

The 7th Floor of the GE Building looked distinctively well kept. Monitors in the walls welcome guests into the hallways and it has an almost newly minted aura. I applaud the work done to maintain the craftsmanship. This time there was no Saturday Night Live to walk past studio and catch my awe, but I remember that the studio we are entering was once the home of my idol Johnny Carson. I keep that in mind as we are led into studio 6B and seated 5 rows from the stage. Excellent seats once again.

We watch some of his popular viral videos on the overhead monitors for a while. The warm-up comedian Seth Herzog welcomes us all in, as he gives us instructions on how to be energetic for the show. He tells a few jokes and ushers in all of The Roots with Questlove joining in last as they play us a song to pump us up for the show. Unlike Meyers and Letterman, Fallon does not come out prior to the taping. Instead, announcer and famed SNL producer Steve Higgins comes out last and talks to the crowd. He has a stack of souvenir pillows, and decides to play a trivia game.

Before the first question is asked, I raise my hand enthusiastically. “Name three SNL sketches that Jimmy laughed during.” My hand somehow grew higher if that is at all possible. “You sir!” I look behind me convinced he can’t mean me. “Yes sir, you in the blue.” Holy crap, he did mean me. I stand up and count on my fingers. “The cowbell sketch, the leather shop, and…..f*** what else is there?” My swear brings about mild laughter. I try to think. “Weekend Update.” Higgins nods and tosses the pillow towards me like a frisbee. It overshoots by a few rows, and after a slight jest, the gentleman who had caught it  tossed it down to me. I paid no mind to the questions that followed due to my exceeding joy in this matter. But the show begins, and I’m refocused.

Higgins begins the intro, The Roots play the theme, and in bursts Jimmy Fallon, our hometown hero. Jimmy hails from Saugerties, New York which is the next town North of us in Kingston, so we’re hoping for the opportunity to tell him. He goes through his monologue which kills it. He also does a bit about dictionary definitions which knocks it out of the park, but i’m exceedingly happy for the return of a back and forth between Jimmy and Higgins where the latter pretends to be on the other end of a telephone call, and ends by offering Jimmy “some crack.”

Jimmy returns from commercial break to introduce a bit about the Ben & Jerry’s flavor introduced the night before (but not before he calls his “fact checker” and is offered more crack). The video plays and we see that it is set in the Ben & Jerry’s we were in hours before. We most likely missed seeing it live by a few minutes. Oh well.

Sigouney Weaver comes on and shares some fun anecdotes, but the juiciest bit comes when Jimmy asks about the possibility a new Alien movie. She doesn’t reveal much, but she says that she is game to do one. She also jokingly explains that Louis C.K. wants a cameo. I’m sold.

Andy Cohen and Ella Henderson are the second guest and musical guest respectively. But the most exciting thing to happen was at the end of the show. Customarily at the end of the show, Jimmy runs through the audience and gives high fives to people at the ends of the rows. I anticipated this was our best chance to meet him.

Jimmy runs up the left side, goes across the back of the audience, and comes down the right side. We have our hands out, he slaps them. But before he goes further, we all shout out “We’re from Kingston/Saugerties.” Luck again finds us, and Jimmy turns to us, widens his eyes and says “No way! That’s awesome!” He lingers with us for a few seconds and makes sure to shake each one of our hands. He talks to us briefly about he loves seeing people from his home area. “I love you guys!” My companion states “Come home Jimmy!” Jimmy laughs and says “I will soon.” He resumes his run down the stairway.

This is probably not a huge moment to the man whom Entertainment Weekly named “Entertainer of the Year” for 2014, but this was a tremendous moment for us.

After the show we leave Rockefeller Center, head to Dave and Busters in Times Square for dinner and fun. (I’m not paid by the company to say this, but they have the juiciest Chicken Tenders i’ve ever had.) We return to Grand Central, and return home.

I managed to catch the second half of the broadcast in my dorm room, and as the credits rolled, I anxiously waited to see if we would be shown talking to Jimmy. I cross my fingers, and sit at the edge of my bed as I see….YES! There we are! For all the world to see!

This was the only remaining network late night programming that tapes in NYC that I had yet to see, and I can say that it was the most enjoyable one yet. There was an energy in the room that felt palpable.

Check back in March for Experience articles of The Daily Show with Jon Stewart and The Nightly Show with Larry Wilmore.