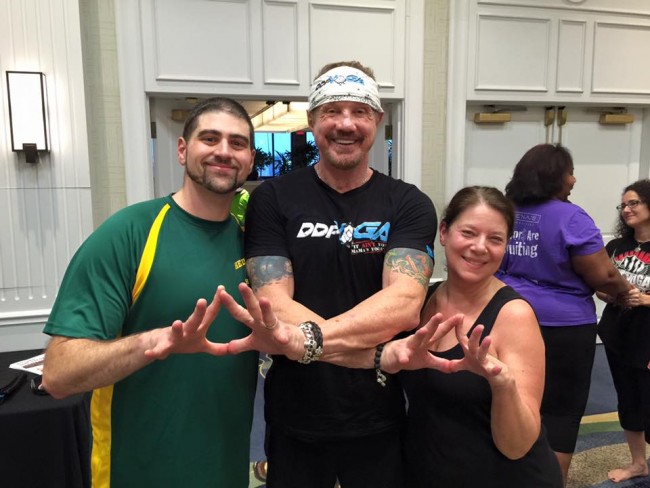 “The REPETITIONS of AFFIRMATIONS Leads to BELIEF & Once that BELIEF Becomes a DEEP Conviction Shit begins to Happen!” – Diamond Dallas Page

Diamond Dallas Page is one hell of an effective self promoter. And it is because he believes, in both his products and in you. Not a moment goes by in any of his appearances, DVDs or live events where he isn’t constantly reminding you of what you can do when you fully commit and believe in yourself. And in between he is sure to push his increasingly growing line of products, like a great self-made business man should. I have been a DDPYoga practicer since early 2012. I was looking for something new to supplement my gym routine and was about a year removed from some significant weight loss. DDPYoga was still Yoga for Real Guys then and was just starting to really pop up on various wrestling message boards and news sites. I figured it was worth a shot and immediately bought into the program. Page’s attitude is so infectious, it is almost impossible not to catch it. I was lucky enough to speak to Page for a while when he joined us on the Kevin Kelly Show in 2014, and I became an even bigger believer in his cause. Once I received the package back in 2012, it became a family activity. My wife, and eventually my daughter, often join me in the workouts, but my mother-in-law fell in love with DDP right away. She loved his flair and honesty, and as a lifelong yoga fan, she dove right in. So, when I stumbled across the announcement of a DDPYoga seminar in tiny old Rhode Island coming early in 2016, I asked her if she wanted to join me to check it out. The answer was an immediate and obvious yes. We signed up and waited.

It rained like hell on January 10, 2016, but it didn’t deter us from crossing the pair of bridges into Newport and arriving at the hotel ballroom well in advance of the call time. After registering, we waited in line for a bit and people-watched. It was an interesting mix but everyone that was there had a clear passion for both DDPYoga and improving their overall health and physical well-being. Page’s wife Brenda was the first one on the scene, and she was engaging and welcoming as we all (I would peg the attendance in the upper 50s) entered the large room and got ourselves settled in. After another 30 minutes or so, Page waked into the room and immediately took command with his larger than life, yet easy going persona. In a nice touch, DDP walked around the whole room and took the time to personally introduce himself to everyone and thank them for attending. These are the little things that make DDP so successful, just like when I received a cold call from Page when I had ordered his DVD set back in 2012, and he spent ten minutes giving me motivation and talking about the program. Next up, Page gathered everyone in a tight circle and spent nearly an hour telling his incredible story. It was a story I was familiar with, having followed his career since the early 90s, read his autobiography, listened as Kevin interviewed him, watched him on Shark Tank, etc, etc. That didn’t matter. He is so engaging and weaves in and out of his broken childhood, wrestling career, injuries and his mission to save rock-bottom wrestlers like Jake Roberts and Scott Hall, keeping you locked in the whole time. He spent a decent amount of time on his bond with the Snake, talking about how they came about making the well-regarded documentary The Resurrection of Jake the Snake (available on iTunes on January 12). He also was sure to call out members of the audience to share their stories of success as well, pulling everyone into the show. Oh, and he swore. A lot. It was great. Page then closed the speaking portion of the day out by reviewing his new smart device app. I wasn’t quite sure what to expect, but it was damn impressive. It was deep, covered a ton of ground and on the surface seems like a pretty strong offering for your $8.99/month. If you are strongly dedicated to the program and it is your main source of exercise, it is a no-brainer purchase.

With that all behind us, the time to sweat had come. And boy, did we ever sweat. The first 40 minutes or so were spent on learning all the breathing techniques as well as reviewing the “Diamond Dozen”, a series of positions and moves that everything else is built off. It was great to have that level of personal instruction, critique and motivation and he also had four certified trainers (Brenda included) performing on stage and working the crowd to keep everyone on track. Once that was finished, the main event began. Page turned up a pulsing soundtrack (opened with Smells Like Teen Spirit and as he said “if you know, you know”) and led us through a tough, impressive workout that lasted a solid 80 minutes and ran the gamut of workouts. Page joked at times and shot off platitudes of encouragement at others but all throughout he churned his way through each and every exercise as well. As the soon to be sixty-year old said at the end, he would never stand up there and dictate what to do. He wants to show that he can practice what he preaches. After the workout ended and everyone took a breather (or two or three), we took a group picture and then Page stood at the front of the room (next to his merchandise stand, natch) and was sure to chat and take pictures with everyone that attended. Again, the little things.

I have always been a big fan of Dallas Page. How can you not be? The guy is sincere, hard working, and you can tell he truly wants to change the world for the better. And he turned that passion into a million dollar business. Just like his late mentor, Page personifies the American Dream. I recommend the program. I recommend the seminar. I am all in on DDP. And I am not alone. The success stories on his website tell you all you need to know. Commit to the program and commit to yourself and you can reach that level of success as well. And that’s not a bad thing. That’s a good thing. Bang!

Check out the DDPYoga website for details on how to order the program, sign up for seminars or the yearly retreat and view success stories