We’re back here in the Hill Valley Region for four second-round matchups, three of which feature a certain Bat-themed superhero. Can the caped crusader lay claim to 3 spots in the Sweet 16? Or will the world’s greatest detective be taken down by the likes of Doc Brown, Quentin Tarantino and a little heard of superhero team from some company called Marvel? Only time will tell. Before we get started, let’s take a look at what the overall tournament bracket looks like. A larger version can be viewed here. 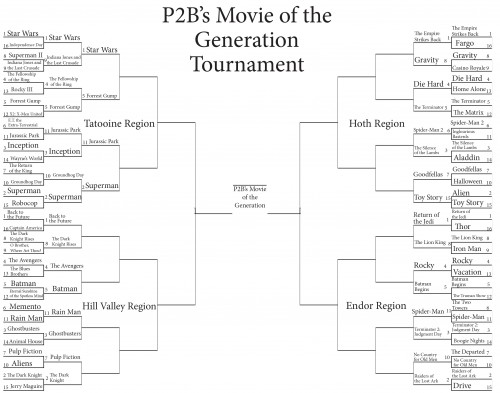 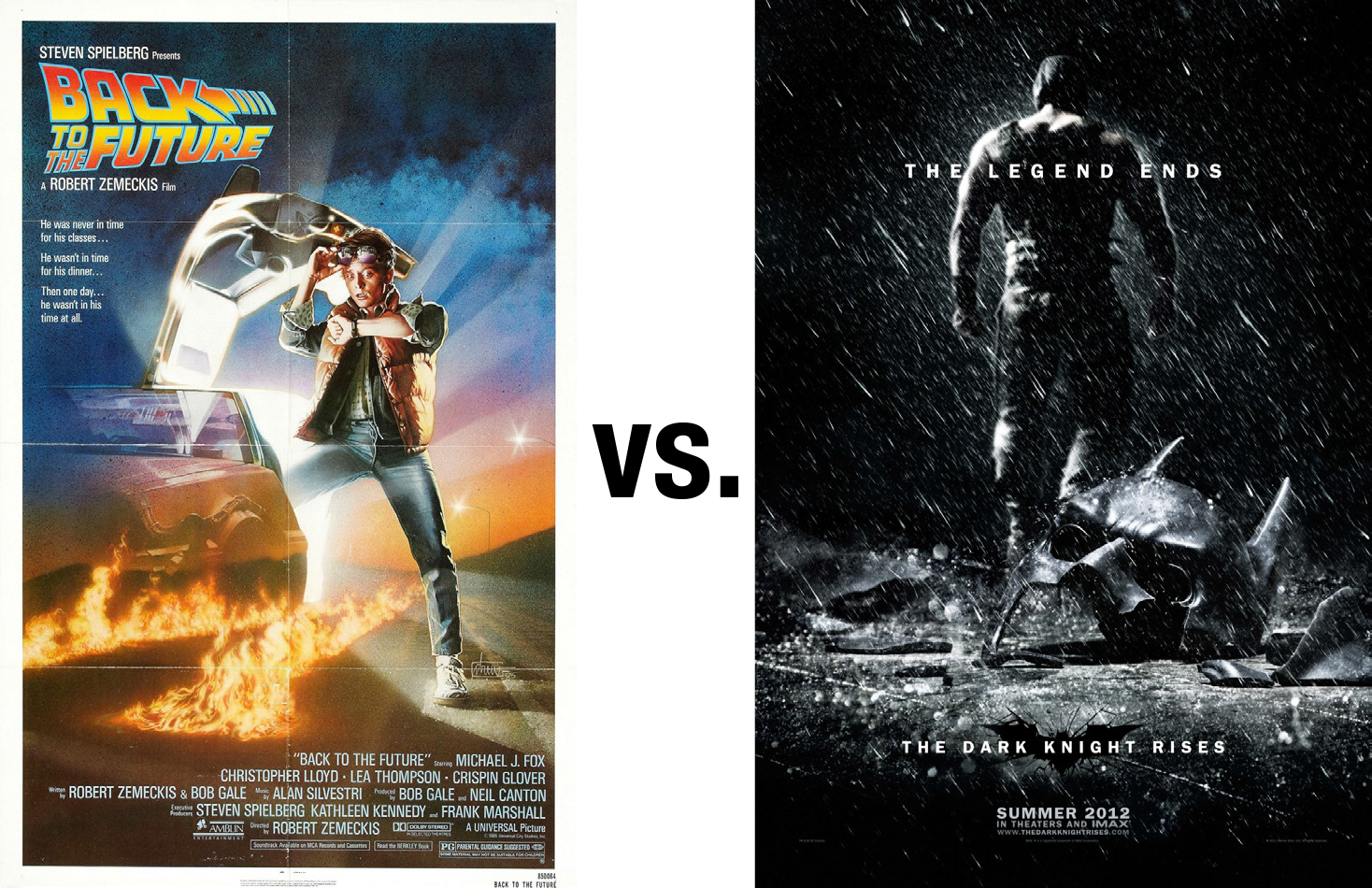 Back to the Future: Finished No. 1 in 1985 with 43 points, ranked by 9 of 10 voters, highest ranked by Glenn Butler, Nick Duke, Kati Price, Andrew Riche, Russell Sellers, Steve Wille and Andrew Woltman at No. 1.
Round 1: Defeated Captain America: The First Avenger 9-1.

Anthony Estrada: The case for Back to the Future: This movie’s got layers like 4th of July dip – a time travel flick; a multi-generational buddy comedy; an Americana slice of life; and a deceptively poignant look at family, the effects that pressure and time take in whittling down one’s dreams and personalities, and the life-long revolt against this process.  The relationship between Marty and Doc is so unique, playful and sweet that you forget how creepy it actually is (Let my teenage son spend his free time with the wild-eyed, middle-aged, bachelor recluse scientist – oh sure).

The case for The Dark Knight Rises: The final installment in perhaps the most consistently awesome film trilogy in history.  It delivers the epic moments you expect from a Nolan movie: Bane’s mercenaries and the remaining police squaring off in the snow; Wayne striving to escape the pit; Batman’s final sacrifice.

Why Back to the Future Takes It: The Dark Knight Rises is amazing in parts, but a little bloated and too clever for its own good.  The narrative surrounding the nuclear weapon is convoluted and confusing and a third act character twist lands awkwardly with a whimper.  Back to the Future is sweet, funny, re-watchable, entertaining, sad and triumphant.  The characters are embedded in our culture – Biff, Doc, Marty, even George and Lorraine McFly as the horny teenagers who somehow became your parents.  It doesn’t come immediately to mind when listing the best movies of the generation, but we’ve all seen it and we (pretty much) all love it.

Final tally: Back to the Future  6, The Dark Knight Rises 4 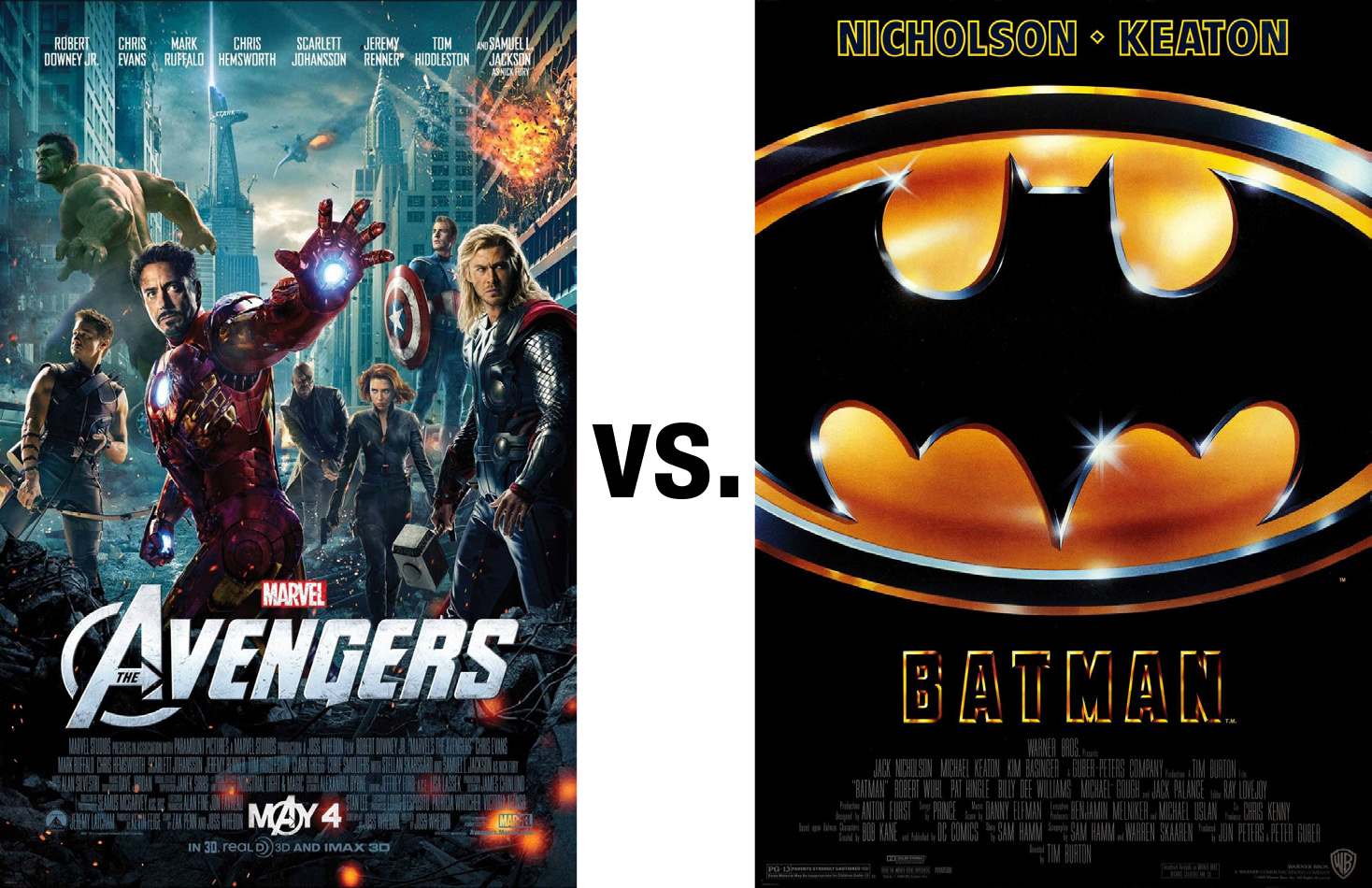 Nick Duke: As part of the P2B comics staff, it’s likely no secret that the superhero and comic book genre has become one of my favorites in all of film. These movies often start out with a certain amount of good will before I ever step into the theater, given my emotional attachment to many of the characters. I care about these heroes and the world around them before the opening credits ever roll, and there is no character, perhaps in all of literature, that carries that extra good will with them more than Batman. And thus, 1989’s Batman dominated my childhood. It was a film I revisited at least five or six times a year for many years, and even to this day, it’s one that I find myself annually rewatching at some point. I love it so, even if certain aspects haven’t aged as well as others and subsequent performances of the same characters have been more impressive. It’s not on the level of The Dark Knight Trilogy, but it’s a damned fine representation of the characters and mythos viewed through a different lens.

However, as much as I love all things Bat, this film just can’t compare to The Avengers. It’s easy these days to forget just what a colossal gamble The Avengers seemed to be when the wheels were put in motion to build to the eventual blockbuster. Marvel had sold off the rights to many of its most prominent characters, leaving it with a lineup that, before 2008, could be considered B-list at best. But, then came Iron Man, a film so perfectly executed that the concept of the Marvel Cinematic Universe immediately became a real, tangible thing that was barreling toward The Avengers. Captain America and Thor continued the MCU success, and four years after Robert Downey Jr’s Tony Stark first graced our screens, we got to see the first-ever full-on comic book crossover on film. If it sounds like I’m praising the film mainly for its place in history rather than its own merits, that’s only partially true. The film itself is a wildly entertaining action movie with bits of legitimate laugh-out-loud humor thrown in. Marvel has shown it can make bold choices at times, and no choice was more bold than hiring Joss Whedon to bring The Avengers to life. His direction and writing, combined with dynamic performances, make The Avengers the finest Marvel movie to ever hit the big screen. And it sits atop a list that doesn’t include a bad movie, if we’re counting only the movies Marvel has produced itself. 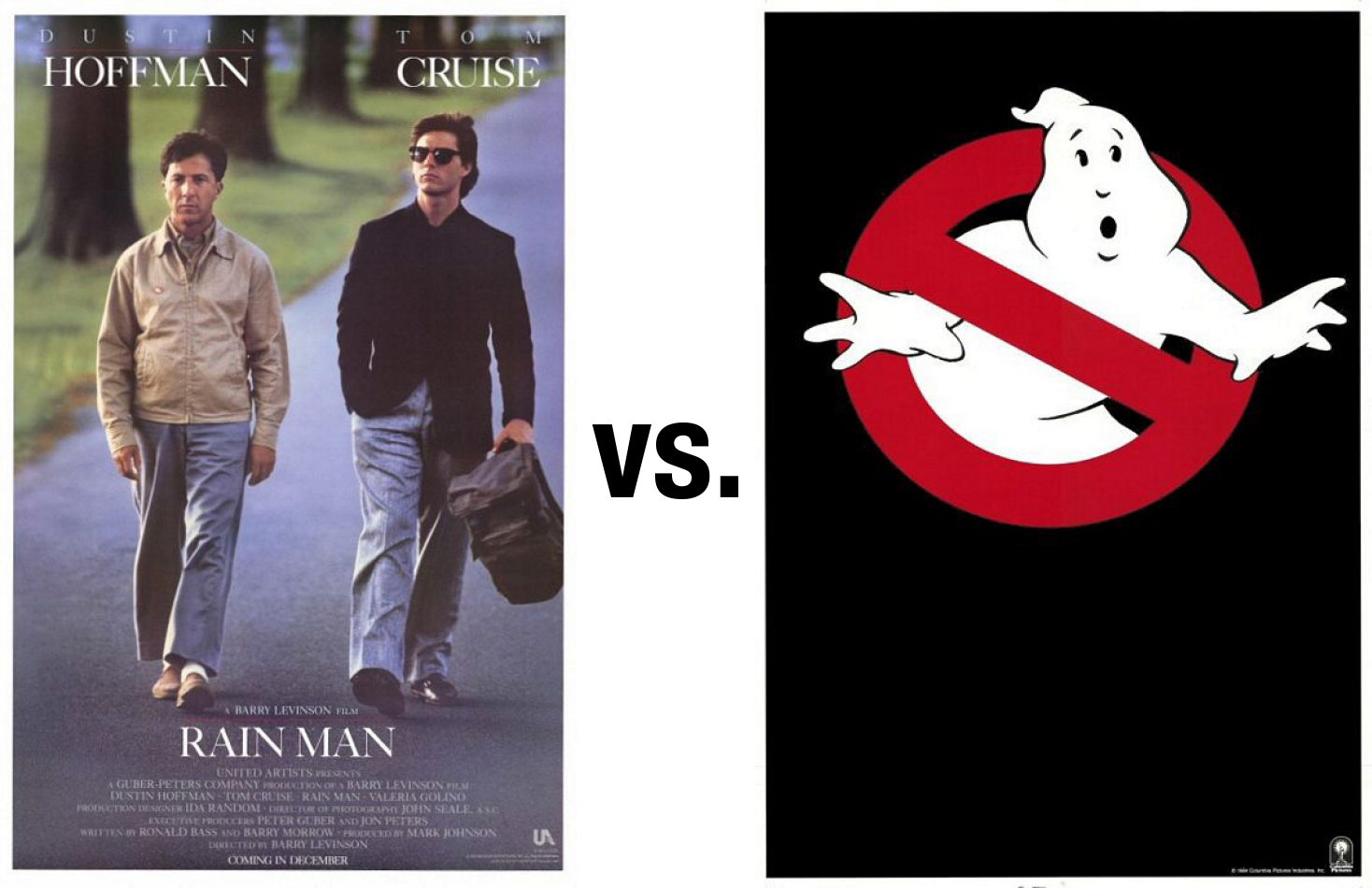 Ghostbusters: Finished No. 1 in 1984 with 34 points, ranked by 7 of 10 voters, highest ranked by Nick Duke, Anthony Estrada, Greg Phillips, Andrew Riche, Russell Sellers and Steve Wille at No. 1.
Round 1: Defeated Animal House 9-1.

Russell Sellers: Don’t get me wrong, Rain Man is a fine film and has one of the greatest performances in cinematic history from Dustin Hoffman, but it’s no Ghostbusters. For me, Ghostbusters represents the pinnacle of storytelling and filmmaking. It was a game-changer in multiple aspects. It had everything I love about movies. The humor, the action, a heavy dose of sci-fi/fantasy and just a smidge of horror mixed with great performances and character development. I think I’ve mentioned a few times that this is my favorite movie of all-time. It will always be my vote no matter what. Even when it comes up against other classics. If ever there was a movie that had something for everyone, it’s Ghostbusters. 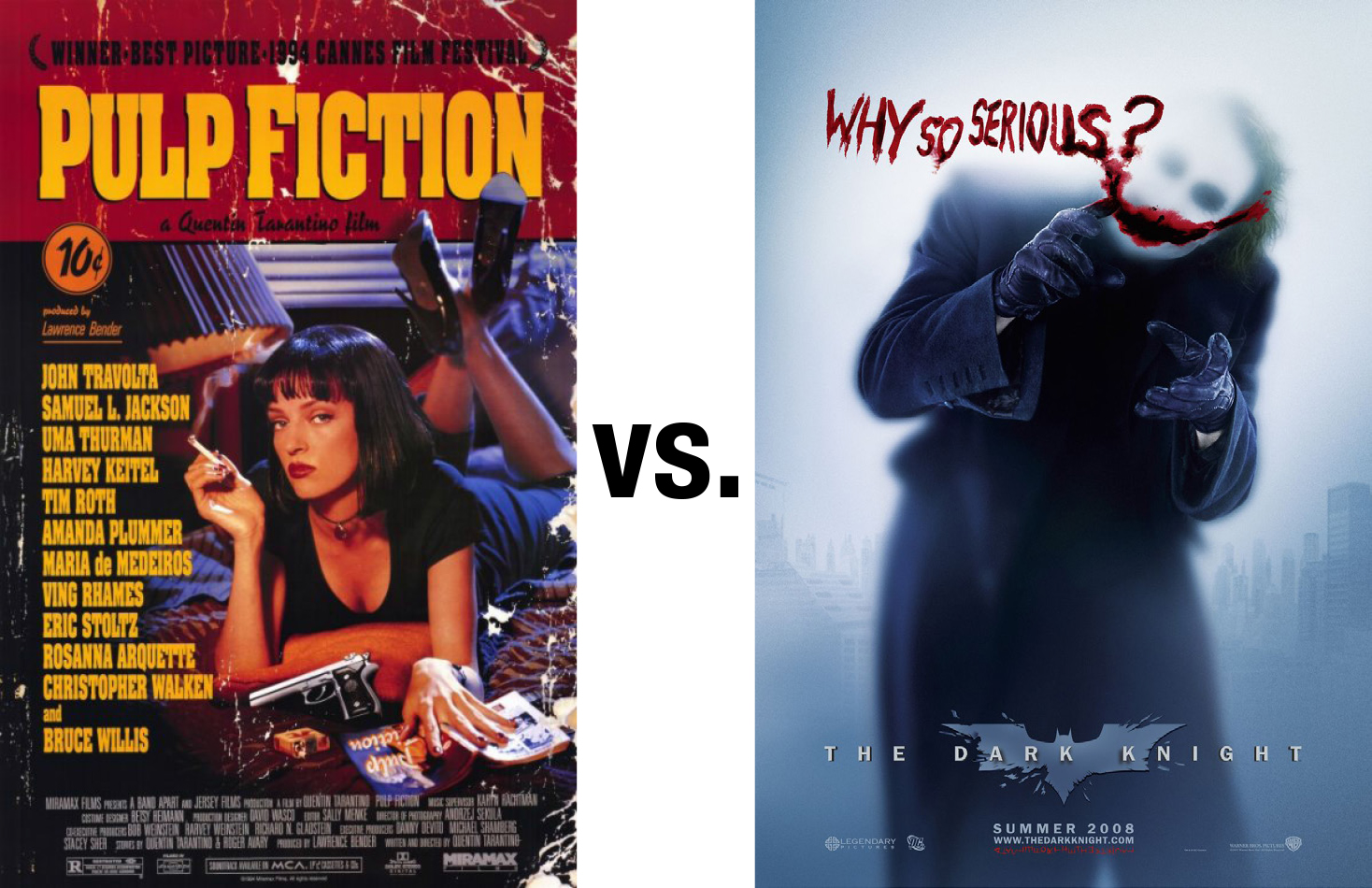 The Dark Knight: Finished No. 1 in 2008 with 41 points, ranked by 9 of 10 voters, highest ranked by Nick Duke, Anthony Estrada, Greg Phillips, Kati Price, Andrew Riche and Russell Sellers at No. 1.
Round 1: Defeated Jerry Maguire 10-0.

Tim Capel: OK, now this is a fight! The Dark Knight and Pulp Fiction are celebrated films, both critically and commercially, and unquestionably deserving of their legacies as cultural phenomenons. Honestly, I could see either one taking the whole tournament. It’s a shame that one of them will get knocked out in the early-goings… but which to choose, which to choose???

It’s difficult to imagine a scenario where either film starts to feel dated. After all the varied interpretations of the caped crusader over the years, The Dark Knight finally gave Bat-fans the movie they’d been longing for. Batman Begins may have gotten the ball rolling three years prior, but it felt like just the tip of the iceberg once TDK came along. No matter how many new iterations of Batman we have to contend with in the ensuing years (and there will be more, that much is a given), TDK can always be held up as the first to truly get it “right.”

Quentin Tarantino’s Pulp Fiction also holds up incredibly well, and it gets extra points in doing so as the older of the two films by some years. Pulp Fiction‘s purposely anachronistic leanings and slick aesthetic are insulating in that regard, lending a real timelessness to the film. Despite the slew of imitators in its wake, there’s something wholly unique to Pulp Fiction that could never be recaptured.

If we go to the box office, TDK blows Pulp Fiction out of the water — and the latter wasn’t exactly a slouch in that regard. To this day, TDK still ranks in the top twenty highest-grossing films of all time. Pulp Fiction‘s take of over $200 million as a slow-and-steady climber is a remarkable achievement for an independent, but it can’t compete with TDK‘s $1 billion total. All other things being equal, we could use this as our measuring stick. Still… my gut just tells me Pulp Fiction is the more “representative” film, in whatever way that matters. I just think it has wider reach, no matter how many more dollars TDK convinced moviegoers to part with.

I might as well acknowledge that I’ve made no secret of my displeasure with most of director Christopher Nolan’s efforts to date, not the least of which being his Batman trilogy. So… that seals it then, right? Pulp Fiction for the win. Not quite. In terms of Nolan’s Batman, The Dark Knight is the best of the bunch. That might sound like damning with faint praise, but TDK is not merely exemplary in the context of its film series or genre. It’s on my short list of personal favorite films, period. So is Pulp Fiction. It’s tough for me choose even subjectively which I prefer.

With Inception and Inglourious Basterds going down in the previous round, this is the last stand for either Nolan or Tarantino in the tournament. It’s been a hard-fought effort to stay alive by Nolan, as all three of his entries have gone to a tie-breaker. In other words, I’ve dissed him twice already; it’s hard to justify making that a hat trick, especially in such a nail-biter as we have here. I hate the notion of Tarantino being eliminated so quickly, but Basterds lost pretty decisively.

In a vacuum, I really could go either way on this decision. However, in the interest of combating my own bias (if nothing else), I’m going to keep Nolan in play. Realistically, I see TDK as the only option offering a potential path to victory for Nolan. In that sense, I suppose Tarantino’s stronger catalog of films (to my mind) makes him a victim of his own success. Of course, this now assures a contest between TDK and Ghostbusters, so it’s far from smooth sailing for Nolan from here…