One thing we at Place to Be Nation like to celebrate is the subjectivity inherent in entertainment — be it in wrestling, comics, music, television or, indeed, film. With that in mind, ten members of the PTBN staff will be picking the movies of the PTB generation. In this series, panel members will collect their five favorite films of each year, beginning with the year in which the oldest writer was born — 1976. The only rule given to each contributor was to provide his or her own criteria. Some writers may go with the most artistic films, while others might side with the most iconic blockbusters. We welcome your lists on Facebook and Twitter. Each staff member has submitted a list of five movies from 2010 ranked 1 through 5. A first-place vote is worth five points, a second-place vote worth four points, and so on. Using that point system, we have identified the top 5 movies of 2010.

2010 was dominated by the latest film from Christopher Nolan. However, there were also several other critically acclaimed movies in the hunt as well. But before we reveal the top 5, let’s see the movies that received votes, but fell short of making our final list.

Get Him to the Greek — 3 points

The Kids are All Right — 1 point

Scott Pilgrim vs The World — 1 point 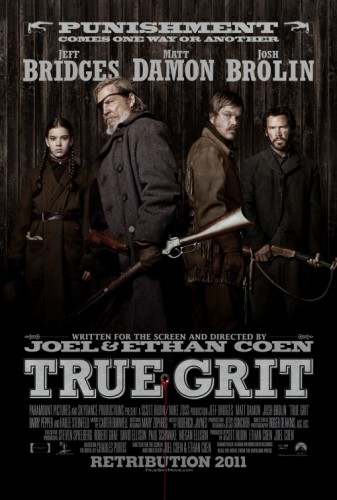 8 points, ranked by 2 of 10 voters, highest ranked by Glenn Butler and Greg Phillips at No. 2

Greg Phillips: Joel and Ethan Coen have an unparalleled knack for taking the concepts of the traditional Western and modernizing them for today’s audiences. Western themes can be found in almost all the Coens’ films, and in the 2010 remake of Henry Hathaway’s True Grit, they got the opportunity to make an unabashedly traditional Western.

The results are stunning. Anchored by outstanding performances from Hailee Steinfeld, Jeff Bridges, Matt Damon and Josh Brolin, True Grit takes its viewers on a true adventure through the Old West, one filled with perils from nature and from within. The score is magnificent, making sure the film never feels overwrought or depressing despite the danger lurking around every corner.

Even though I’d seen the original (with a great performance by John Wayne), I still found myself sucked into the story of this one and the wonderful characterizations. Steinfeld is a revelation, delivering her dialogue with a confidence unseen in one so young. It’s miles ahead of Kim Darby’s turn in the original film. Whether you’re a lover of Westerns or not, this is one you need to check out, because it’s a blast from beginning to end.

Nick Duke: I’m not typically overly fond of children’s movies, particularly those that were made after I was no longer a part of the demographic they’re aimed at. The exception to that rule, however, is the Toy Story series. I loved the first film as a child, enjoyed the second as a teenager and was willing to fork over the $9 to see Toy Story 3 on the big screen when it was released in 2010. And, of course, I was not disappointed. In fact, I was blown away.

Kevin Smith jokingly called Toy Story 3 “Schindler’s Toybox,” which isn’t too bad of a nickname for the film. It is one of the more depressing children’s movies I’ve seen, yet manages to be so without losing its sense of wonder and the humorous beats needed to keep audiences of all ages engrossed. It deals with themes of loss, acceptance and growing up, all in ways that are accessible to even the youngest viewer, yet tug at the heartstrings of even the most jaded viewers, such as myself.

The story focuses on the familiar Toy Story gang of Woody, Buzz and friends. Their owner, Andy, is moving away to college and the toys have been isolated for quite some time due to Andy’s lack of interest in his old playthings. When the toys are mistakenly thrown away, they are convinced Andy no longer wants them. They soon find themselves at a daycare, where there are promises of a new life and children to play with every day. Of course, not all is as it seems, and the toys soon find the need to stage a grand breakout. In this way, Toy Story 3 is something like the Pixar version of Escape from Alcatraz. The prison break sequence is thrilling, but is completely upstaged by the sequence that follows. The toys again find themselves in the trash, headed for an incinerator. Yes, in a children’s movie, our main characters are threatened with a brutal end via incineration. It’s an intense, white-knuckle sequence that has to be seen to be believed.

Of course, our heroes survive and even find a new home in a final scene that ends the franchise in an appropriate manner. Well, at least it would have. Toy Story 4 is coming, but even if it turns out to be a dud, we can always look back and pretend the series ended with Toy Story 3.

14 points, ranked by 4 of 10 voters, highest ranked by Andrew Riche and Russell Sellers at No. 2

Russell Sellers: Making a movie about the beginnings of Facebook might not seem like good material for entertainment, but director David Fincher proved that sentiment dead wrong.

Like many other biopics about wealthy people, this one starts humbly enough…with Mark Zuckerberg (played masterfully by Jesse Eisenberg) attending Harvard University in 2004 and taking the idea of the campus-based facebook and turning it into a way for students to vote on each other’s attractiveness. And all while being a complete dick to everyone, even his friends. This doesn’t go well for him in the eyes of the female students or the university. But it does start him on a path to something bigger.

The drama begins when Mark is recruited by the Winklevoss twins (both played by Armie Hammer) a pair of wealthy jocks to build a social networking site that sounds remarkably like the idea Mark came up with before he ever met them. Of course, Mark agrees because it pays, and then he just builds his own site. With the help of his buddy and secondary source of funding, Eduardo Saverin (Andrew Garfield’s most compelling performance), Mark launches Facebook to great success…and then gets sued by the Winklevoss twins for supposedly stealing their idea.

As the movie progresses, it beautifully illustrates the sad state of social interaction of today and why maladjusted nerds with power and money can be just as cruel and petty as the most corrupt politician or uneducated CEO. It also shows a remarkably human side to Zuckerberg who may come off as callous and even downright evil, but he’s really just someone wanting to be loved. He thinks he wants to be loved by everyone, but it’s really about him learning to actually love himself. He turns into who he thinks the world will love and respect, but winds up losing nearly all his friends and even a lot of money for his trouble. The moment when he tries to weasel Eduardo out of his fair share is one of the most intense dressing-downs ever filmed. Garfield delivers what is easily his finest on-screen moment when he nearly punches Napster founder, Sean Parker (Justin Timberlake), in the face.

This is the next generation’s Wall Street. It’s poignant, yet self-serving. Beautifully filmed, but full of ugly souls. It’s obsessive and selfish but it tries to care about everyone and everything. It’s a lot of weight to carry, but with Fincher’s expert direction, amazing performances across the board and a killer score from Trent Reznor, it all floats on a digital cloud.

Anthony Estrada: The Fighter. A suitably-named vehicle for Mark Wahlberg, whose resume includes titles such as The Corrupter, The Big Hit and Shooter (“So there’s this guy, right, and he shoots things. Like, all kinds of things”). But don’t let the name fool you. This isn’t some mindless action film or lazy cop drama. The Fighter tells the (mostly) real life story of Mickey Ward, a mediocre boxer living in his brother’s shadow. Ward, played by Wahlberg, is a guy from the neighborhood and not much is expected from him. No longer a young man, and lacking direction, he meets a girl who helps him find the focus he needs to reach his potential. The notes sound familiar, but they’re presented with truth and detail that make them feel fresh.

Ward grew up in an Irish neighborhood in Massachusetts, not unlike Wahlberg. Like many of us from the Northeast, his life is uncomfortably meshed with that of his family. Mickey’s mother Alice acts as his manager. His brother Dicky, a former boxer and current crack addict, is his trainer. The three function in a dysfunctional, and vaguely oedipal, circle in which Mickey is overlooked and overshadowed.   A lesser movie would have made the mother and brother villains. Here, they’re flawed but sympathetic figures. Each plays a role within the family: Dicky is the charming screw-up, worshipped and coddled by Alice, who reigns over her family with overbearing dominance. Mickey lets each walk over him, and lacks the self-esteem to break the cycle. That is until he meets Charlene, a sassy bartender with whom he begins a romantic relationship. Charlene pushes Mickey to stand up for himself and take ownership of his boxing career and his life. Once Mickey demonstrates his spine, the effects are swift and stunning. Alice takes a (small) step back and gives Mickey room to breathe. Dicky re-evaluates his own poor choices and the harm they’ve caused not only him, but his little brother. And Mickey starts winning fights. He rides his success to a fight for the welterweight championship.

The conclusion is predictable. But the journey to arrive there is worth it. The Fighter is moving without being patronizing, and funny without sacrificing the genuineness of the characters. It’s well paced, never dull, and totally re-watchable. Wahlberg’s next film, due out later this month, is called The Gambler. Scoff if you must, but try to keep an open mind. At least with Wahlberg you always know what the movie’s going to be about. (Kenny Rogers, right?) 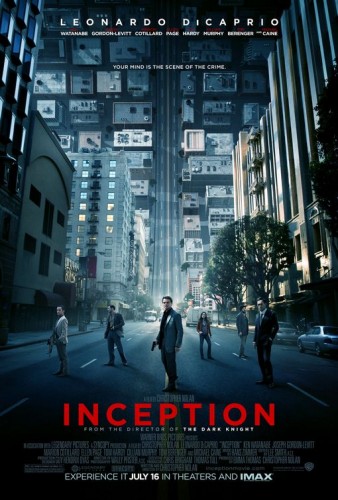 Andrew Woltman: Until very recently, Christopher Nolan had never made a movie I didn’t love. But I’m not here to tell you what faults I had with Interstellar. I’m here to talk about how much I liked Inception.

Nolan’s movies tend to explore the mind and a non linear sense of story. Leonardo DiCaprio plays a good man who does bad things. But the brilliance of the movie and his performance is that he never completely opens up at any one point. We have no sense of what is his true mindset, or his past. This helps to not only explore the dreamscape, but also a sense of character.

Not to mention, Nolan directs a wide array of brilliant performances out of a wide ensemble.