One thing we at Place to Be Nation like to celebrate is the subjectivity inherent in entertainment — be it in wrestling, comics, music, television or, indeed, film. With that in mind, ten members of the PTBN staff will be picking the movies of the PTB generation. In this series, panel members will collect their five favorite films of each year, beginning with the year in which the oldest writer was born — 1976. The only rule given to each contributor was to provide his or her own criteria. Some writers may go with the most artistic films, while others might side with the most iconic blockbusters. We welcome your lists on Facebook and Twitter. Each staff member has submitted a list of five movies from 2000 ranked 1 through 5. A first-place vote is worth five points, a second-place vote worth four points, and so on. Using that point system, we have identified the top 5 movies of 2000.

2000 kicks off the new millennium with a hilarious musical throwback to a bygone era. But before we reveal the top 5, let’s see the movies that received votes, but fell short of making our final list.

Requiem for a Dream — 7 points 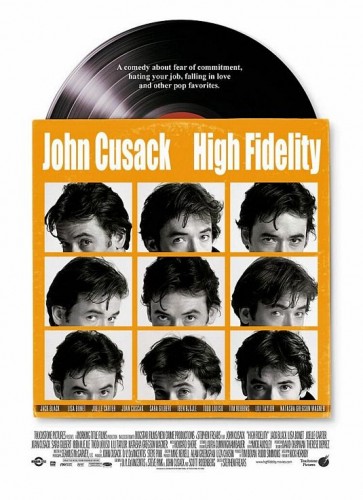 Russell Sellers: In my top five films about modern relationships, this one is at the top. Not to mention it has one of the best soundtracks of any film ever made.

Main character Rob (John Cusack) takes us on a fourth-wall breaking journey through his top five worst breakups as he’s going through one in the present. Along the way, we’re treated to the sounds that defined those moments in his life as he analyzes every aspect of why his life has turned out the way it has. From his inability to grow up, his failing record store, seeing his ex moving on right in front of him to his imagining of the worst-case scenarios and his eventual confrontation with his own shortcomings, it’s a referendum on how we relate to each other.

The supporting cast is fairly top-notch with laughs from Jack Black and some interesting cameo roles for Catherine Zeta-Jones, Tim Robins and Lisa Bonet. Director Stephen Frears brings Nick Hornby’s best novel to the screen in possibly the most faithful way anyone could. So much of the novel’s plot and even dialog remains intact, despite changing the setting from London to Chicago and a few cultural musical selections morphing for the audience’s sake. It’s a rare thing in adaptations to find a faithful translation that also dares to make certain drastic changes.

If you’re looking for great entertainment that’ll also make you take a long hard look at some of your own relationships of years past, this is a true classic. 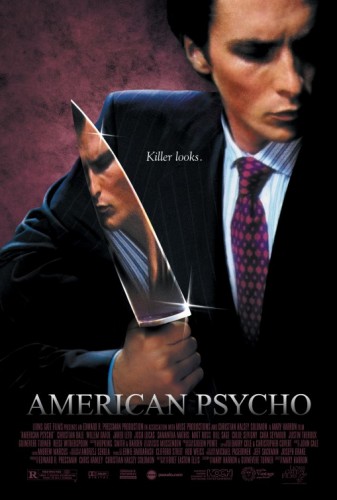 15 points, ranked by 4 of 10 voters, highest ranked by Nick Duke, Greg Phillips and Andrew Woltman at No. 2

Nick Duke: I could sit here and wax poetic on how different and enthralling American Psycho really is, but why not let the man himself, Patrick Bateman, do the honors?

“Do you like Phil Collins? I’ve been a big Genesis fan ever since the release of their 1980 album, Duke. Before that, I really didn’t understand any of their work. Too artsy, too intellectual. It was on Duke where, uh, Phil Collins’ presence became more apparent. I think Invisible Touch was the group’s undisputed masterpiece. It’s an epic meditation on intangibility. At the same time, it deepens and enriches the meaning of the preceding three albums. Christy, take off your robe. Listen to the brilliant ensemble playing of Banks, Collins and Rutherford. You can practically hear every nuance of every instrument. Sabrina, remove your dress. In terms of lyrical craftsmanship, the sheer songwriting, this album hits a new peak of professionalism. Sabrina, why don’t you, uh, dance a little. Take the lyrics to “Land of Confusion”. In this song, Phil Collins addresses the problems of abusive political authority. ‘In Too Deep’ is the most moving pop song of the 1980s, about monogamy and commitment. The song is extremely uplifting. Their lyrics are as positive and affirmative as, uh, anything I’ve heard in rock. Christy, get down on your knees so Sabrina can see your asshole. Phil Collins’ solo career seems to be more commercial and therefore more satisfying, in a narrower way. Especially songs like ‘In the Air Tonight’ and, uh, ‘Against All Odds.’ Sabrina, don’t just stare at it, eat it. But I also think Phil Collins works best within the confines of the group, than as a solo artist, and I stress the word artist. This is ‘Sussudio,’ a great, great song, a personal favorite.” 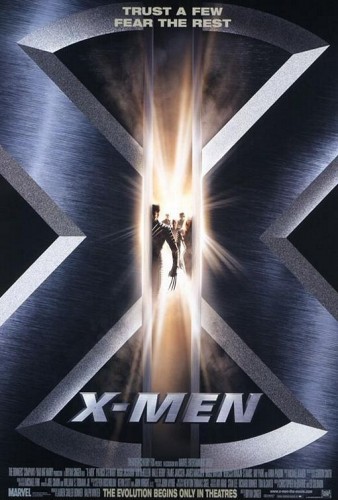 Andrew Woltman: The modern age of Marvel Studios owes it’s success to one man. And that man is Kevin Feige, the smartest film producer of our time. The interconnection of a film universe was something that seems like a no-brainer. But Feige spearheaded the initiative. He learned watching his mentor Lauren Shuler Donner on the film X-Men, which is in essence the film that started the modern age of superhero films.

The film doesn’t reinvent the wheel in terms of storytelling, and it feels much like a showcase for Hugh Jackman’s Wolverine (as all of the films do). But it’s a demonstration that a comic book movie can shine the spotlight on several characters. We don’t get the best introductions to all of our favorite characters, but we get brilliant performances from Patrick Stewart, Ian McKellen, Halle Berry, James Marsden, Anna Paquin and more. Honestly, I think that Stan Lee may have seen the future and drew Xavier as Patrick Stewart.

The film’s greatest accomplishment (much like the Matrix), lies in what came after. The franchise has brought about some very beautiful sequels, and made Hugh Jackman one of Australia’s most marketable exports. Not to mention what the film inspired, and what will come further. 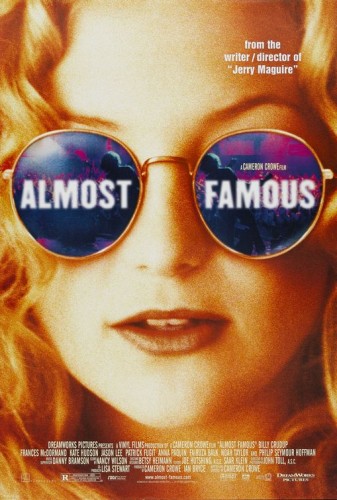 16 points, ranked by 4 of 10 voters, highest ranked by Anthony Estrada and Steve Wille at No. 1

Anthony Estrada: “The only true currency in this bankrupt world is what you share with someone else when you’re uncool.”

This is my favorite quote from my wife’s favorite movie.  It’s the cinematic equivalent of a hug from your high school best friend or unfolding a note from your crush.  It makes me feel nostalgic and hopeful at the same time.  And it’s the embodiment of Almost Famous, which may be the most underrated movie of the past twenty years.

Almost Famous is the coming-of-age tale of William Miller, an awkward and brilliant teenager who loves music as much as you or I love anything. It’s 1973, rock music is still highly relevant, and William schemes his way into writing a lengthy article for Rolling Stone magazine. The subject is Stillwater, a band on the rise. William leaves his home, and overbearing mother, behind and follows them on tour.  Along the way, he encounters a string of lost and fascinating people in search of an alternative reality where they can be whoever they want.  They’re drawn to William and to each other.  They wear costumes and assume personas. They act like what they imagine rock stars, and the people that accompany them, are supposed to act like. But what they share at their core is the yearning for a connection, to share an experience or a passion or a moment in time.

You know the scene.  Everyone is on a school bus.  In this moment, they’re not rock stars or groupies.  That was last night and now they’re too tired or hungover to keep up the act.  Someone starts singing a pop song.  Someone else joins in.  Faces light up and the bus becomes a chorus of rock stars singing Elton John’s latest hit.  It’s the most joyful scene in the movie.  And it’s wonderfully uncool. 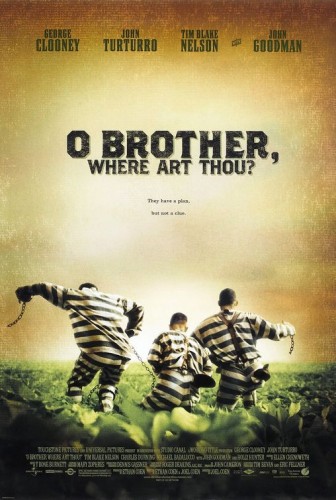 22 points, ranked by 5 of 10 voters, highest ranked by Nick Duke, Greg Phillips and Russell Sellers at No. 1

Greg Phillips: The Coen Brothers are among the most versatile and skilled filmmakers in the industry. The same duo that crafted the cerebral A Serious Man and the suspenseful No Country for Old Men also produced this modern comedy classic, a riff on The Odyssey through the lens of the Depression-era Deep South.

There is much to love about this movie. In my opinion, it’s George Clooney’s finest film and role, a tour-de-force as Ulysses Everett McGill, leader of three convicts on the run in search of treasure. Tim Blake Nelson hits a grand slam every time he’s on screen as the lovable idiot Delmar. John Turturro more than holds up his end of the bargain as the quick-to-anger Pete.

As great as the lead performances are, though, the side characters often steal the show. Foremost among these fantastic performances is Charles Durning’s hysterical portrayal of Mississippi Gov. Pappy O’Daniel, whose constant berating and criticism of his hapless stooges (played by the unheralded Del Pentecost, J.R. Horne and Brian Reddy) provides much of the film’s comedic punch. Pappy is obviously over-the-hill and corrupt, but not quite as evil as his opponent in the election, the incredibly southern Homer Stokes. John Goodman, Holly Hunter, Ray McKinnon and Chris Thomas King also deliver funny, strong performances throughout the movie.

Obviously, I can’t go without mentioning the wonderful folk/country soundtrack. It’ll get stuck in your head for days after watching the film, even today, and remains one of my favorite soundtracks. And, of course, there is the endless list of quotable lines in the film — “Don’t want no Fop. I’m a Dapper Dan man!” “We. Thought. You. Was. A. Toad!” “Good thing your mother died in child birth. If she could see you now, she’d’ve died of shame.” “And stay out of the Woolsworth!”

O Brother is a modern classic and one of the funniest movies I have ever seen. I go back to it several times a year and never cease to enjoy it.