One thing we at Place to Be Nation like to celebrate is the subjectivity inherent in entertainment — be it in wrestling, comics, music, television or, indeed, film. With that in mind, ten members of the PTBN staff will be picking the movies of the PTB generation. In this series, panel members will collect their five favorite films of each year, beginning with the year in which the oldest writer was born — 1976. The only rule given to each contributor was to provide his or her own criteria. Some writers may go with the most artistic films, while others might side with the most iconic blockbusters. We welcome your lists on Facebook and Twitter. Each staff member has submitted a list of five movies from 1992 ranked 1 through 5. A first-place vote is worth five points, a second-place vote worth four points, and so on. Using that point system, we have identified the top 5 movies of 1992.

1992 saw one of the closest races yet, as the top 5 movies all finished within 5 points of each other and we had our second straight tie at the top. But before we reveal the top 5, let’s see the movies that received votes, but fell short of making our final list.

A League of Their Own — 5 points

Scent of a Woman — 4 points

Glenn Butler:  There are movies that stick in our minds without making an impact on pop culture or carrying any deeper significance. My Cousin Vinny is essentially based on one gag: what happens when two smart-talking New Yorkers bring their big-city ways to a murder trial in a humble courtroom in rural Alabama? Hilarity ensues, that’s what happens.

Written out and separated from the performances, the gags & goofs in this movie may seem like a tired list of fish-out-of-water-in-The-South tropes: Joe Pesci doesn’t know what grits are! Marisa Tomei is talking about the Chinese food in Alabama! Joe Pesci wants to wear leather jackets, and his accent confuses and frightens the judge! Taken all together, though, the movie coalesces into a breezy, fun, mirthful whole. Pesci and Tomei’s chemistry develops over the course of the movie, including the “imagine you’re a deer” monologue that probably did more than anything else in the movie to earn Tomei her Best Supporting Actress Oscar, and intersects with the goings-on in the court case, the ostensible plot of the movie, in a long climax that seamlessly draws the viewer’s interest to Pesci and Tomei’s temporarily-broken engagement to the murder in question to the complexities of the Positraction rear differential and independent rear suspension in the Buick Skylark versus the Pontiac Tempest. Now there, friends, is a movie-making accomplishment. 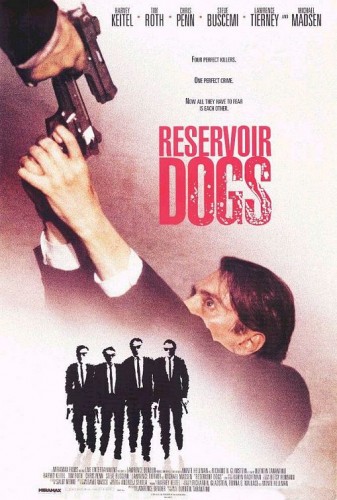 Andrew Woltman: One of the reasons I am pursuing a writing a writing and directing career is because of the influence of director Quentin Tarantino. He has created some of the best films ever due to their conversationalist characters and grotesque violence.

Reservoir Dogs isn’t his best work but it’s high up there. The idea of non linear storytelling is nothing new, but it’s really intriguing to see the idea of a heist film without the actual heist. It’s a pretty interesting concept, one that involves searching for context clues. We meet the characters, we jump, and then we see that a lot went down in a short span of time. Afterwards, we get a look back at the circumstances of these men before they meet.

One would think that the notion is confusing and ill formed, yet it is enjoyable for the reasons that we don’t know who to trust and we don’t know all the facts ex post facto. These decisions formed the rest of Tarantino’s career, and the man has learned a great mastery of how to develop a great screenplay and get the most of a cast. 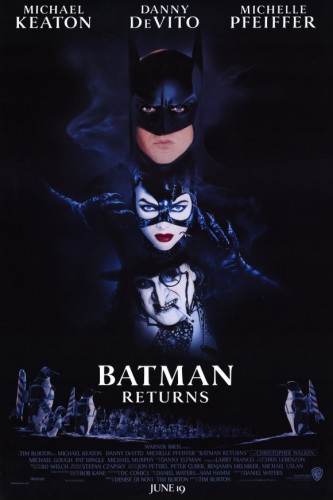 15 points, ranked by 4 of 10 voters, highest ranked by Nick Duke and Andrew Woltman at No. 1

Nick Duke: I’ll start by stating the obvious: In the years since its release, Batman Returns has become something of a divisive movie, and is indirectly responsible for the franchise completely going off the rails in the late 1990s. After the massive success of Tim Burton’s first Batman film, a sequel was a given. However, Burton was able to use that success to gain greater creative control, resulting in a Batman film that’s more Burton than it is Batman. The gothic feel of the first film is considerably greater here, and a creepy vibe kind of dominates the film’s landscape. Penguin is a mutated sewer orphan, Catwoman is resurrected by cats, Batman is… less than concerned for some human lives. It’s a weird mix for a Batman movie. The studio complained it was too dark (Chris Nolan laughs) and eventually gave the reins to Joel Schumacher, who certainly brought in a brighter, more kid-friendly version of Bruce Wayne. But, this movie completely works for me.

Danny DeVito as the Penguin works for me. Michelle Pfeiffer’s admittedly out there performance as Catwoman/Selin Kyle works for me. (Her suit CERTAINLY works for me, but that’s a whole other thing.) And while Bruce Wayne/Batman is largely a side character in his own movie, when he’s there, he works for me. The movie’s quirky, weird, odd, and I can’t get enough of it. Christopher Walken as Max Schreck is delightfully over the top, and having his character’s son do a Chris Walken impersonation is even better. All in all, Batman Returns may not be beloved by many Batfans, but it’s beloved by me. 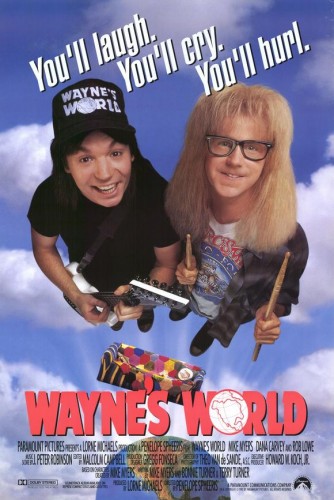 Steve Wille: Saturday Night Live sketches don’t generally translate well to the big screen. Five minute shorts have quick-fire jokes that, when stretched to ninety minutes, wear thin rather quickly. You’d think that Wayne’s World would fall into this trap, as its concept — two overgrown children in their twenties putting on a public access show from a parent’s basement — is pretty simplistic. But, with Mike Myers and Dana Carvey delivering the dialogue, Wayne’s World goes beyond its plot, becoming an oft-quotable, non-stop laugh riot.

Like one of my previous favorites, Ferris Bueller’s Day Off (shamefully missing the cut in 1986’s countdown), part of my love for this movie comes from its references to Chicago. Aurora, Illinois is more famous for being Wayne and Garth’s hometown than anything else. The street hockey scene, with the friends adorned in Blackhawk red, is a highlight, as is the special appearance of hockey legend Stan Mikita. Myers often speaks to the audience, slightly reminiscent of another favorite It’s Garry Shandling’s Show, adding sight gags along the way. Wayne’s World also introduced a generation to Queen’s “Bohemian Rhapsody,” though it may have tricked those same kids into believing that “Ballroom Blitz” was a hit by “babe” and co-star Tia Carrere, instead of The Sweet. 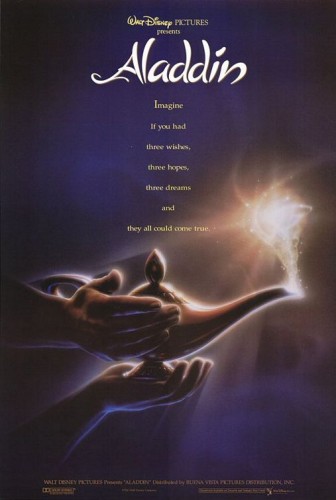 18 points, ranked by 5 of 10 voters, highest ranked by Kati Price and Russell Sellers at No. 1

Kati Price: The 90’s were a good decade for Disney. Aladdin is the second Disney movie to make our lists in as many years, and it is no small wonder. When you think of animated feature films, if Disney doesn’t come to mind, you’ve probably been living under a rock. Disney is unquestionably the front runner for animation and Aladdin is no exception.

Like most Disney movies, Aladdin is not an original story, but that’s okay: Disney movies do not need to be original stories to be classics. Aladdin is a typical “pauper-to-a-prince” story except for the fact that he has a genie on his side. Aladdin comes across the lamp containing the genie when he enters a secret cave that only a “diamond in the rough” can enter.

Aladdin meets a girl who he later learns is a princess. He uses the genie to become a prince so that he can be with Jasmine, the princess. Of course, it’s not THAT easy, as there is an evil sorcerer, Jafar, that wants to be sultan and tries to keep Aladdin away from Jasmine. In the end, good conquers evil and Aladdin and Jasmine live happily ever after… until Aladdin 2.