One thing we at Place to Be Nation like to celebrate is the subjectivity inherent in entertainment — be it in wrestling, comics, music, television or, indeed, film. With that in mind, ten members of the PTBN staff will be picking the movies of the PTB generation.  In this series, panel members will collect their five favorite films of each year, beginning with the year in which the oldest writer was born — 1976. The only rule given to each contributor was to provide his or her own criteria. Some writers may go with the most artistic films, while others might side with the most iconic blockbusters. We welcome your lists on Facebook and Twitter. Each staff member has submitted a list of five movies from 1980 ranked 1 through 5. A first-place vote is worth five points, a second-place vote worth four points, and so on. Using that point system, we have identified the top 5 movies of 1980.

Once again, we have a year dominated by George Lucas at the No. 1 spot. However, that just makes the race to make the top 5 even more heated. But before we reveal the top 5, let’s see the movies that received votes, but fell short of making our final list.

Smokey and the Bandit II — 2 points

The Gods Must Be Crazy — 1 point 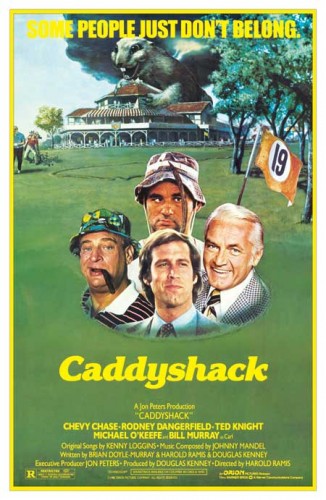 16 points, ranked by 6 of 10 voters, highest ranked by Greg Phillips and Russell Sellers at No. 2

Greg Phillips: Caddyshack is one of those movies that appeals to me at every age, one of those comedies that captures the imaginations of kids, teens and adults alike. The beauty of this is how it evolves with your own tastes.

As a child, it was all about Bill Murray and his quest for a mischievous gopher. As a teen, I became obsessed with Rodney Dangerfield’s irreverent quips and complete disdain for the establishment. And as an adult, the star of the film has undoubtedly become Chevy Chase, who peppers every scene with subtle wit and charm. His dry delivery of some of the great lines in cinematic history will never get old.

The film stands as one of the best comedies of all time, and Harold Ramis was just getting started with making classics. 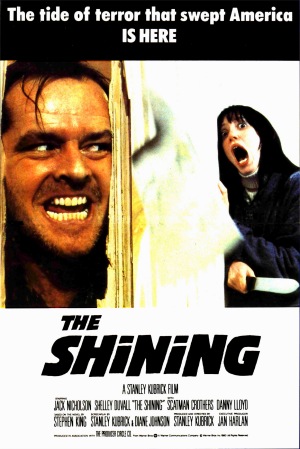 Anthony Estrada: Are you expecting an original take on The Shining?  A fresh perspective that hasn’t already been shared with the world?  You are? Oh… well this is awkward.

I don’t have an original take on The Shining.  It’s a movie that transcends movies.  It has been absorbed into our national culture.  As a matter of fact it’s circulating in your brain space whether you know it or not, whether you’ve seen it or not.   An elevator of blood.  Twin sisters standing in a hallway.  An axe through the door.  These sentence fragments form instantly recognizable images in your head.  You’ve seen it referenced so many times you don’t think twice when it happens (My favorite: “No TV and no beer make Homer something something”).

I actually had a problem with this movie for a long time.  That’s because I grew up on Stephen King and, for me,  Jack Nicholson’s over-the-top performance was miles removed from the gradual descent into madness depicted in King’s novel.   But it grew on me.   Nicholson is a force of nature – all wild eyes and ironic line readings, like he’s somehow too cool for his own movie and he’s showing off for us.  The result is a spectacle; watching it is an experience.  The Shining manages to be unintentionally hilarious and legitimately disturbing at the same time.

I suspect most movies are made with the hope of creating something enduring, or at least memorable.  For me, The Shining is less a cohesive movie than a series of unforgettable scenes:   Wendy discovers what Jack’s been writing.  Jack chats with Lloyd the bartender.  Jack embraces the woman in the bathroom.  Each one is self-contained magic – it plays like an amazing short story collection put on film.  But I’m probably not telling you anything you didn’t already know. 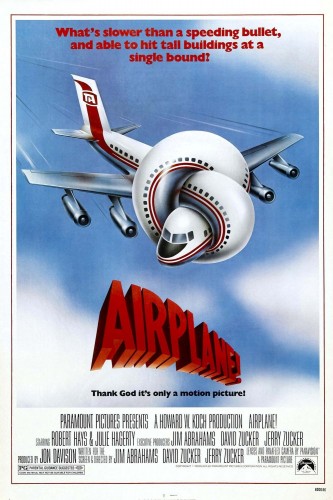 Andrew Woltman: If there was ever a single consistency in the answer to the funniest movie of all time, you would have undoubtedly heard Airplane! as the answer. To say that it is funny would be an understatement, because if this is simply funny, nothing is hilarious.

At this point, comedies were shying away from the slapstick form that made them great in the first place, and Airplane decided to turn the genre upside down by being utterly ridiculous in the best possible fashion. Be it the one-liners, or the sight gags like the “Smoking Ticket,” it’s so magnificently simple to enjoy this for the laughs alone. It’s intended to be a parody of classic films such as Zero Hour or Airport 1975. It succeeds so well as a spoof that I didn’t know that either basis film existed before the age of Wikipedia.

The true magic occurs is in the fact it doesn’t pretend to offer a cohesive story that should be completely invested. It fully plays on the tropes and jabs them in the eyes the way Moe Howard would. The actors are clearly people that aren’t accustomed to comedy, and play the roles straight for what they are. In this dry wit, the lines lend themselves even more absurdity. To the modern viewer, imagine Channing Tatum in 21 Jump Street and remember how flat he was before that point. This is how the careers of Robert Stack and Leslie Nielsen found a new voice. It’s masterfully performed, well written, and all in all it’s surely the strongest comedy of the 1980’s. But don’t call me Shirley. 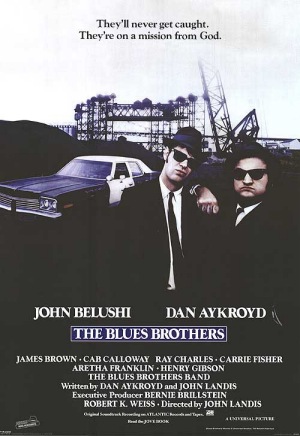 20 points, ranked by 7 of 10 voters, highest ranked by Glenn Butler and Nick Duke at No. 2

Nick Duke: I first discovered The Blues Brothers back in 2006, my senior year of high school. I was familiar with the general concept (I mean, come on, who hasn’t heard someone say “We’re on a mission from God,” at some point in their lives?), but little else. The first time I saw the film, I enjoyed it, but never would have considered it one of my favorites.

But a funny thing happened sometime in the next five years — I started catching bits and pieces of the film through television viewings and every time I wound up getting hooked and staying through to the film’s conclusion. Soon, I had bought my own copy on DVD and since then, The Blues Brothers has become a film I have to watch at least once a year.

It’s endlessly quotable and both Dan Aykroyd and John Belushi just seem to exude a certain coolness and charm that probably seemed a bit dated even for 1980. Add to that the amazing litany of cameos — Ray Charles, John Candy, James Brown, Cab Calloway, Aretha Franklin — just to name a few.

But the heart and soul of the movie (It is The BLUES Brothers, after all) has to be the musical numbers. The aforementioned Charles, Brown, Calloway and Franklin all lend their talents to the film, with Calloway on hand to perform his signature “Minnie the Moocher” during the film’s climactic concert. All the musical numbers are great, but if I’m singling one in particular out, it has to be the one that has both kinds of music — country AND western. 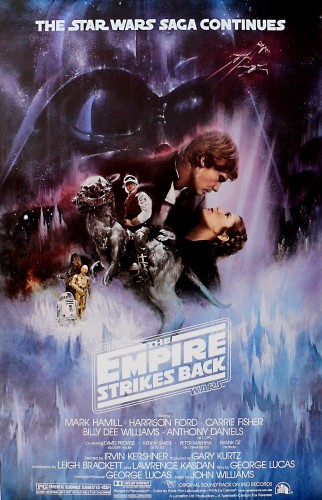 Russell Sellers: How do you follow up one of the most important films in modern history? With a sequel that tops everything about the original!

George Lucas made the wise decision to hand the director chair over to Irvin Kershner and scripting duties to Lawrence Kasdan. Where the first film had its serious moments, it never wanted you to forget you were watching a space opera. The Empire Strikes Back proposes you take space opera seriously and then gives you every reason why you should.

Star Wars takes a turn into Shakespearian epic territory with this chapter, which is a testament to developing multiple characters over a single film. While Luke Skywalker was clearly the lead character of the first movie, Han Solo, Leia and Darth Vader all have character arcs that would make for interesting films all on their own here. The multiple times Leia calls Han out on being a non-committal douche and an egomaniac, Han’s dramatic ride-off to save Luke on the frozen tundra of Hoth, Luke’s personal vendetta against Vader leading him to bad decision making and, of course, Vader’s game-changing reveal at the end make this easily the most emotionally intense film in the Star Wars saga.

We also get introduced to, possibly, the most quoted character in all of Star Wars lore: Yoda! He also gives us so much more insight into the nature of The Force and its role in the larger story that it begins to feel like a character all by itself. Especially when Luke confronts “Vader” in the cave.

And let’s not forget how much the effects improved from the first movie to this one. Just look at the Hoth battle and the lightsaber duel on Bespin and compare them to the Vader/Obi-Wan Death Star duel or the Battle of Yavin. If only Lucas could stop “tweaking” it…

The feelings this movie produces can be summed up in one scene… “I know.”