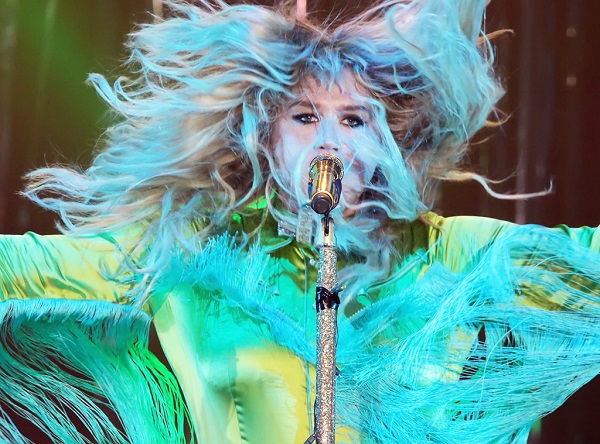 Kesha is my spirit animal

“So what do you spend money on?” – The girl who attended Kesha & The Creepies on the “Fuck The World” tour with me in Atlantic City Saturday night. The question was prompted by her asking me “what was my dream car?”. I didn’t have an answer. She asked if I dreamt of houses and I said not really. The answer to the aforementioned question is that I spend my money on making memories. I do that through spending money on travelling, stemming from my love of history, and entertainment taking the form of pro wrestling and music.

After each pro wrestling show, my brother and I will try to come up with what history making angle we had just witnessed. These run the gambit from the silly to the influential. My brother loves bringing up such angles as the Birth of “Dashing” Cody Rhodes on a random Smackdown! in Manchester, NH or the breakup of the APA on the Smackdown after WrestleMania XX at the TDGarden. Sometimes, we travel to a show expecting history to be made like at WrestleMania XXVIII (Miami) where it happened in a curious way when Daniel Bryan lost in 18 seconds to Sheamus. A seemingly insignificant angle like the breakup of APA led to Bradshaw reinventing himself as JBL and going on to be the longest reigning world champion in about a decade. I can say I was there for that. The fans’ reaction to Daniel Bryan’s loss to WrestleMania XXVIII set off a chain reaction of events that has profoundly changed the landscape of pro wrestling forever. I can say I was there for that. That’s the nature of pro wrestling. It is open-ended and continuous. Almost every show has import on the next show meaning I am almost guaranteed to be witnessing history every time I attend a pro wrestling card. Concerts are the complete opposite of this.

The inherent nature of concerts is they are static, reactionary events. You are not witnessing history being made so much as bearing witness to a snapshot of time. Due to my taste in music, this tends to be a window into the past. I love telling my Dad what KISS or Alice Cooper did that night and then for his retort to be “been there and saw it in 1976”. Even when I saw Ke$ha three times prior to Saturday night, what was I really witnessing was just an image of 2012 through her beautifully sleazy lens of reality. None of this had any impact on the future. I don’t take pride in saying I was there in May of 2013 when Motley Crue played on Lake Winnepausakee where Vince Neil was dumbstruck that the crowd was not cheering for hot girls. It is a great, funny memory, but it was not significant history. On August 6th, I witnessed history being made in Atlantic City.

In the modern musical landscape, change is most affected through the recording of music (the single/album) and not live performances. The release of an album heralds the direction of the artist and sets the tone for the ensuing tour. The concert is an audiovisual representation of the album something that is already recorded in the past. Therefore, without an incredible effort, a concert is backwards-looking, a reaction to what already exists. There are singular exceptions I have witnessed. Such as 2013 Ke$ha’s reimagining of “Take it off” as a grimy, sleaze rock song or Robert Plant’s fascination with World Music. In the case of the former, it was an interesting treat for live fans, something special for us, but not forward-looking. In the case of the latter, it is self-indulgent at worst and promoting underappreciated music at best, but it is not changing the legacy of Robert Plant or the musical world. Saturday night, Kesha & The Creepies did not just shift the paradigm, they shattered it.

They broke free of the fetters of the album-tour model to deliver a night completely devoted to Kesha, the passionate artist and defiant human being. The concert is the tool being used to assert her independence and reshaping of her life, not the album. Perhaps this is due to legal reasons, but whatever the reason, it created a night of breath-taking beauty, unbridled passion and loud defiance. It signals her reclaiming her dignity and control of her destiny. As she declared that night (paraphrasing based off memory), “I am finally putting on the show, I have always wanted to put on for you guys.” The show was an expression of her individuality.

There were no keyboards. No autotune. No Dollar Sign. But don’t worry there was still plenty of glitter! Kesha’s natural, raw, powerful and soulful voice filled the carpeted casino ballroom. Such a strange venue for a personal revolution, but this was a strange concert. Its versatility of how she covered her own songs in the form of rock, country, dance, punk and glam into one cohesive concert worked because of her emotional investment in each song. It featured covers of disparate artists such as Iggy Pop and Dolly Parton. Not just evidence of the breadth of influences, but the breadth of who she is as a person.

It is so easy for people to dismiss Kesha out of hand superficially as a “dirty, trashy, vapid party girl”. Taking the time to listen to her music, you will realize she is a nuanced, complex person that checks all pretensions at the door. That her brash, irreverent party music is a statement on embracing the human condition and the happiness you will find in that whole-hearted embrace. You can see the sneer and the bite of Iggy Pop in her songs. There is also the sensitivity of Dolly Parton in wanting to affect positive change through her music. At the end of the day, Kesha’s music is the music of wish fulfillment. David Lee Roth has described that as the most powerful form of music. Kesha is the girl who lived her dreams only to see them transform into a nightmare. If there is one thing we know about Kesha, the girl who broke into Prince’s house to drop off a demo, is that she will never give up. This concert was a statement of defiance that her ideals of humanity would carry her through the day.

I have never met Kesha. I did give it a pretty good shot last night with the afterparty security, probably not as good as she would have done, but I did give it the old college try. I think there is no public figure that better represents my worldview than Kesha. She is my spirit animal. So on an oddly personal note, the concert was a relief. When I saw her in 2013 in Connecticut, she had lost quite a bit of weight and something seemed off. Then I saw the Timber music video at the end of 2013 and she seemed dangerously skinny. It was not a shock when she checked into rehab for body weight issues. To see her smiling and healthy on stage was just awesome and overwhelming. There were many times I was tearing up watching the concert.

I love concerts. I do not think concerts should adopt this model at all. I think that would be completely wrong for the audience they are intended to serve. Concerts should reflect the album and the songs the fans want to hear. The unusual context of this concert necessitated this, Kesha demanded it, and the fans understood. They had the unique chance due to the circumstances to create a show not tethered to the past, but a declaration of independence for the future. Kesha with the loud cry of “I Shall Be Released” fired the final salvo of a 90 minute transcendent expression of human emotion.

I can say I was there for that.

You can listen to Marty on his podcast Tag Teams Back Again, right here at Place to Be Nation.