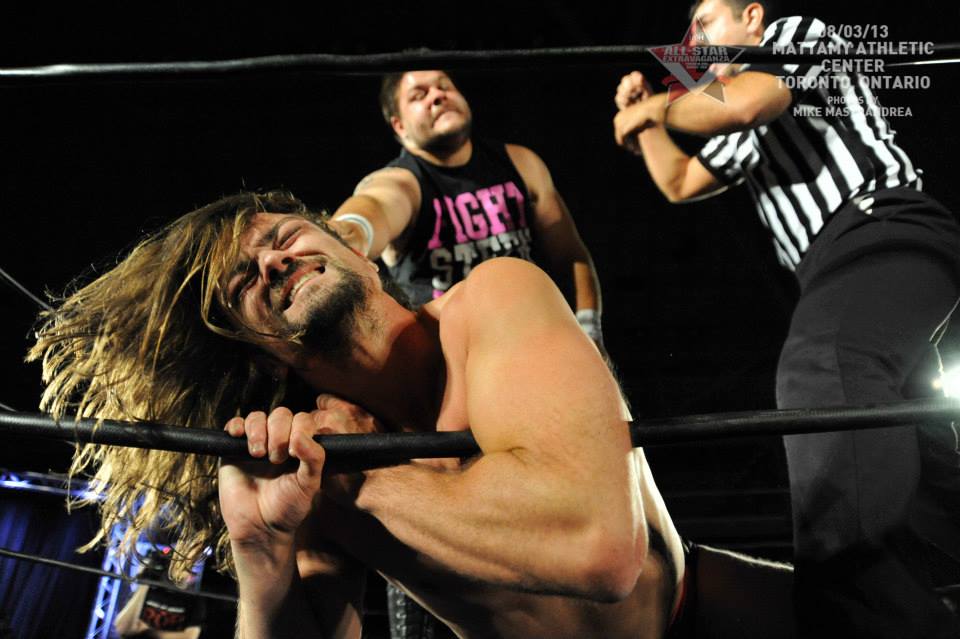 We open this week’s show by going back to last week with clips of the match between Michael Bennett and BJ Whitmer, narrated by Nigel McGuinness. He discusses the severe injury that occurred, wishes Whitmer well and issues a warning about how dangerous the business can be. We then hit our opening animation before heading back inside the Mattamy Athletic Centre in Toronto and we have both opening and second round matches on tap for tonight. We waste no time heading right to the ring.

Matt Taven is out first, accompanied by Truth Martini and the Hotties as always. This is only one of two remaining opening round contests in the title tournament. Roddy Strong follows him out and this should be interesting because if Taven can’t deliver a good match here with Roddy, it may never really click. Kevin Kelly thinks Roddy is a top seed and favorite in this tournament. Nigel gets up on the apron and demands that Scarlett leave ringside and sit down at the announce table since she isn’t properly licensed. Seleziya does have that license, so she is allowed to stay with Truth. With all that out of the way, the match finally gets going. Scarlett tries to proposition Nigel, but he stays strong and denies her. Nigel tells us Roddy just returned from a successful tour of Pro Wrestling NOAH. Taven is methodical early but Roddy cracks him with a dropkick to take over. KK makes an odd comparison involving Seleziya and Big Bubba Rogers. Taven and Truth try to outwit Roddy, but he avoids it and maintains control, picking up a near fall with a suplex. Truth gets involved again, this time hooking Roddy’s leg and allowing Taven to hit a springboard dropkick to knock Roddy to the floor as we take a break. Taven is still in control and Truth is chastising Nigel when we return. Nigels riffs that he has had his vaccinations when Truth questions his intentions. Taven eats Roddy’s knees on a moonsault attempt, giving Roddy an opening to battle his way back in. He lands a series of knees before dumping Taven to the floor. Roddy follows out, but Seleziya distracts him long enough to allow Truth to crack Roddy with his book. Nigel comes over and argues with Truth, who eventually gets accidentally wiped out by Taven. Roddy drops Taven on the apron with a backbreaker but only gets two back in the ring. Taven stays alive and catches Roddy with a superkick. Nigel defends his actions as the two trade kicks in the ring. Taven eventually hits an Angel’s Wings for a near fall as business is picking up in this one. Roddy recovers and gets the Stronghold but Taven is able to reach the ropes. Taven follows that with a rolling neckbreaker and then scampers up top and hits a big frog splash for a close near fall. Roddy battles back with a pair of backbreakers, a big kick to the face and the lungblower for the win. Fantastic finish and I am very happy to see Roddy advance. The back half of that match was very good, which is good because the first half was shaky. Taven was fine, but it still felt like Roddy carried him for the most part.

This is our final opening round matchup and it is a pretty interesting one as the ROH Original makes his return home. KK name drops Spanky! Steen is out next and this feels very similar to last week’s Elgin/London battle in that it should be a really fun match but the outcome is pretty damn obvious. KK discusses the change in how the locker room and management looks at Steen, thinking they would be fine with Steen being World Champion this time around. Kendrick tries a shoulderblock but that doesn’t end very well for him. Steen loudly mocks him for even trying. Kendrick tries to stick and move, but finally just gets frustrated and bails to the floor. Steen eventually follows him out but Kendrick avoids a powerbomb and takes Steen out with Sliced Bread #2. After a break, Kendrick has Steen locked in a rear chinlock, but Steen quickly powers to his feet and runs Kendrick into the corner before falling backwards to break it up. The two start trading right hands, but that ends with a Steen clothesline and pumphandle neckbreaker for two. The crowd has been pretty quiet for this one despite being pretty into Steen during his entrance. Kendrick catches Steen on the top rope and takes him down with a DVD for a near fall. Steen comes back and tries for the sharpshooter, but Kendrick wriggles free and is able to hit a tornado DDT for two. Steen recovers and hits the F-Cinq for a near fall before cracking Kendrick with a sleeper suplex for two as well. Kendrick took that one right on his head. Steen shakes off a low blow and cracks Kendrick with a cannonball dive before hooking the sharpshooter for the win. That was kind of blah as Kendrick just didn’t have his usual crispness in his offense and seemed to be moving a bit slow. Steen moves on, no shock there.

Text “ROH” to “TODAY” and YOU can get some Sicilian Psychopath merchandise.

Back from break, we check out quick highlights from the first round victories of our next two competitors. And that match starts now!

Adam Cole and his swank t-shirt are out first. Of course, Cole knocked off Mark Briscoe in the opening roung, taking advantage of Briscoe’s concussion issues and showing no mercy at all. Meanwhile, Jay Lethal defeated Sonjay Dutt to advance here. This is an interesting matchup as I could see either man advancing. I am guessing Cole gets the win, though. KK notes that Lethal stopped by to wish Cole luck, but Cole said nothing. Slow going early as both men are trying to feel the other out. Nigel makes a good point about how these guys are getting more cautious the closer they get to the finals, which is evident in this bout thus far. A long battle and feeling out period allows for some pretty good wrestling psychology discussions between KK and Nigel. The back and forth continues as neither man can grab a true advantage. KK calls this the “Golden Age of Honor”. After a break, Cole gets dumped to the floor as Lethal follows right after with a dive. Both men are shaken up as Lethal seemed to crash into the barricade as he careened off Cole. KK references the referee’s “cadence”, so now we know why Triple H said it ten times on Raw. Both men beat the count back in and start to really open up with aggressive strikes, which they trade back and forth. Cole ends up seated on the top rope, where Lethal meets him. Cole blocks Lethal and snaps him down with a sunset powerbomb, followed by a Shining Wizard for two. Lethal shakes off Cole and hits the Lethal Combination for a near fall. Lethal blocks a figure four attempt with a small package, but he telegraphs the Lethal Injection, allowing Cole to superkick him and follow with a shoulderbreaker for two. The two trade various types of kicks, a battle which Lethal wins. He drops the Macho Man elbow but Cole kicks out. Cole also survives the LI, frustrating Lethal greatly. Cole eventually works his way back in and snaps Lethal over with the Florida Key to win and advance. KK thinks Lethal is the first favorite to go down in the tournament. Fine match with a good finish and the right result as Cole moves on to Philadelphia and the semifinals. Cole and Lethal shake hands and we fade out for another week.

Another wrestling heavy show this week, but I can’t say any match really captivated me. The opener was fine and I was happy Roddy advanced, but the storyline and Taven dragged it down. The Steen/Kendrick match was a let down and had an obvious finish. The main event was the best of the bunch, especially the final moments. All the right men went over for the tournament but it definitely made for a rather bland episode of TV. Still, even a middling episode of ROH is fun to watch thanks to the quality of talent in the ring, and I can never talk down on a tournament. That’s it from here, have a great week, take care and always respect the code!