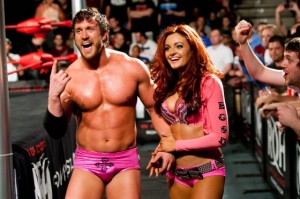 This week’s show kicks off with our opening animation and then we head inside the Du Burns Arena where Kevin Kelly and Steve Corino welcome us to this week’s edition of ROH TV. Corino is still fuming that Nigel McGuiness allowed Kevin Steen to join Team ROH in Steel Cage Warfare, which goes down in two weeks. That said, we head down to the ring for a grudge match.

RD Evans leads God’s Gift to the ring and we see that QT has shaved his head bald. This match has been in the works and building for nine months ever since Ciampa went down with a serious knee injury last year and Marshall beat him down afterwards. He is back and he is as intense as ever. Corino puts over Ciampa’s PPV match with Michael Elgin. Ciampa beats Marshall in and out of the ring. Corino tells us he is legit scared of Ciampa. KK believes he needs to beat QT and finally put this behind him so he can move on in his career. Nice point by Corino about wrestlers setting up their opponents by wrapping injuries to give them a target. QT gets a quick flurry but that is short lived. RD tries to run some interference but Ciampa drags him into the ring. Before he can lay any licks in, QT makes the save. Ciampa quickly fights him off but he gets his leg hooked under the top rope, inadvertently tweaking his restructured knee. After a break, QT is still in the driver’s seat, focusing on that knee. Back on the floor, QT sets up an open chair and then slams Ciampa’s knee across it. KK wonders how far QT will go in wrecking the knee and Corino wonders how long Ciampa can allow it to happen. He finally fights back into it and is able to knock QT to the floor. Ciampa heads up top and then leaps onto QT off one leg. As both men recover on the floor, Prince Nana shows up in the aisle. KK refreshes us that RD stole the Embassy away from Nana and that perhaps Nana is looking for revenge. Corino gushes about how great Nana looks. Looks the same to me. RD tries to escape Ciampa, but Nana blocks his path. Back in the ring, RD eats a Project Ciampa. QT tries to sneak in for the pin, but it backfires. Ciampa crashes into QT with a bionic kneelift and picks up the win. Nana is on his cell phone as he walks off. Good brawl there, hard hitting and I thought we might see QT pick up an upset win for a minute towards the end.

Visit RI Dolls please, and then when you get back, we can go Inside ROH. KK takes us through still pictures of the brutal Briscoe/Briscoe title brawl. Mark suffered a concussion and is out of Steel Cage Warfare. Jay is still hurt as well, and we don’t know how this affects his World Title defense against Matt Hardy next week. We hear from Corino and SCUM, who laughs about how the Briscoes nearly killed themselves for now reason. He couldn’t have planned Hardy’s title shot any better. That was more gold from Corino, as always. As of now, the match is on for next week. In two weeks time, SCUM and ROH square off inside the cage. We go back to last week when Nigel allowed Steen to join ROH in the match, replacing Mark Briscoe. KK then talks about ROH’s return to Toronto on August 3, where they will debut in the old Maple Leaf Gardens. I hope they have the ramp to the ring. We hear from Toronto’s Michael Elgin, who is proud of the return to the Gardens. Elgin wants the main event slot on that show.

This is Merriman’s ROH debut and KK tells us he is very decorated in the amateur ranks. His opponent is the red-hot free agent Michael Bennett. He has the equally red hot Maria and the always entertaining Bob Evans with him as well. Maria and Michael make out in the ring as KK talks about the incoming reality TV, movie, country music and rap offers that have been flowing in for Bennett. KK says he also has contract offers from ROH and other major promotions on the table too. Bennett puts Merriman away in under a minute with the Box Office Smash. Bennett grabs a mic, so maybe we will finally find out about his future. He cut his hair pretty short, is that a hint? Bennett asks the fans if he should stay in ROH or head to New York and pick up a paycheck. Evans hands Bennett the contract that ROH has been begging him to sign. He says the contract is a very long one and then trashes the smug fans in the audience. Now he is bashing Cheeseburger and rips the fans for cheering him on. Bennett calls Cheeseburger into the ring so he can offer up his contract to him. He says he respects Burger for being tough and then lets him analyze the contract. As expected, Bennett superkicks Burger and then pummels him. Brutal Bob tries to pull Bennett off and then finally tosses him aside. Bennett plants Evans with the Box Office Smash and then says he has been portrayed as Bob’s prodigy for far too long. The Prodigy is dead. And that is all we learn as Bennett and Maria head out and we hit a break. KK blames Maria for all of this. Good segment, and with all this focus, I have to assume Bennett is sticking around, but we will see.

KK is setting up our main event, but first Jay Briscoe interrupts us, which shocks everyone. Corino thought he was on life support. Briscoe says he is still breathing and won’t be forfeiting the title. Hardy will have to pry it out of his cold, dead hands. Briscoe is done and he walks off. That was quick and to the point. Corino vows this will be the shortest title match in ROH history next week. KK tells us to never count out the heart of Jay Briscoe. Main event time and the tag titles are on the line.

C&C are out first and they have the gold in their sights. The champs are out next. KO’s hair has quite the coif to it these days. We get the big time introductions for this one. KK wonders if C&C can finally piece it together and take the gold. Corino jokes about the number of title shots C&C keep getting. The champs try to double team where they can, but C&C seem locked in here tonight and they continue to maintain control. Fish finally slows CA down with a boot to the face but he gets dumped to the floor right after. CA follows with a tope onto both champs. Corino takes KK to task for calling CA “Big Ced”. We take our final break. Be sure to call Rob Levine, he is the heavy hitter after all. When we return, we see that the American Wolves are watching this one from the ramp. Corino bashes Davey Richards for being a glory hound, echoing the usual sentiments we hear from Fish. Corino wonders why the Wolves can’t study the tape like everyone else, instead of coming out and acting as a distraction. The champs are able to break the momentum by dumping Coleman to the floor. KO meets him at the guardrail with his crazy leaping dropkick off the apron. The Wolves amble down to ringside after continually making eye contact with Corino. That triggers SCUM, who come out and beat the Wolves down. Now ACH & TD come out too and there is a huge brawl around the ring. CA survives a cross armbreaker long enough for CC to hit a diving headbutt to break it up. The match has broken down in the ring a bit. Fish snaps CA over with a German but he stays alive. C&C hit their finisher as security comes out to break up the brawl. CA dodges a KO clothesline and flies into everyone on the floor with a somersault plancha. Back inside, KO and CC are going at it. The champs hit the Chasing the Dragon and pick up the win. Well, that was pretty wild and well worked overall. C&C looked strong in losing, but the tag division needs some fresh blood for sure, much like the rest of the roster in general. I like reDRagon but they need a new feud with a different team. The brawl spills into the ring and we are out. Good show this week with some different faces, which is always nice. See you next week, and until then, take care and respect the code.