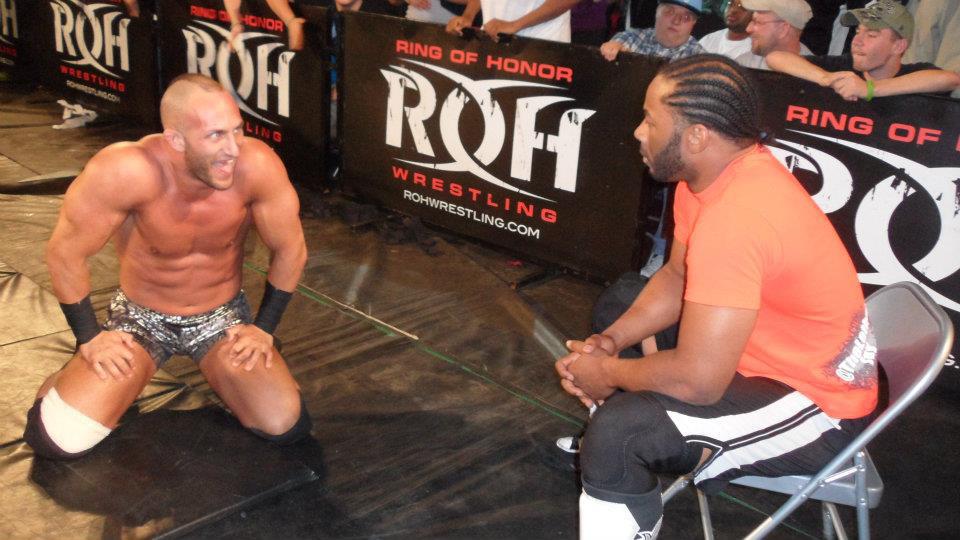 We kick off this week’s show with our opening animation before heading inside the National Guard Armory in Philadelphia as we continue our trek through Anniversary Show weekend. Kevin Kelly and Steve Corino welcome us to the show and run down our card before we head right to the ring for our opener.

Team Benchmark are making their debut, carrying a sponsor sign with him, which impresses Corino. KK can’t get over how many logos are splashed across his sign and gear. And it looks like we have a new potentially dominant hoss tag team in the house as former Top Prospect foes Ray Rowe and Hanson have found a common ground and decided to team up. This could be a lot of fun. KK reminds us about how Bill Daly backed out of the Top Prospect Tournament due to an injury and he decided to heed the word of his agents and heel up. Hanson starts off before quickly tagging Rowe who lays a beating on Will Ferrara. Daly makes it back inside as Hanson does and goes punch for punch with him for a moment before Ferrara tags himself back in and eats a lariat. Team Hoss alternates wrecking Ferrara until Daly is able to catch Rowe with a knee to the back as he hit the ropes, finally slowing the big men down. Daly quickly tags in as KK compares him to Johnny Football, which befuddles the baseball crazy Corino. Daly catches Rowe with a big boot but Hanson comes in and wipes him out. Ferrara is back in and avoids the Spin Kick of Doom but gets planted with Rowe’s half nelson backbreaker for the win. There is certainly some potential in this team, I shall say.

As Rowe & Hanson celebrate, Michael Elgin makes his way to the ring to a loud ovation from the fans. Elgin talks about earning respect in ROH. He watched these two men go to war in Pittsburgh as they battles in the tournament finals and lets both men know they earned his respect. He vows to have their back and he envisions tag team gold around their waists very soon. He is tired of seeing Adam Cole having backup while he has none, so that changes now. That is a nice endorsement there and pretty cool to see Elgin build an army of monsters up.

When we return from break, Kevin Steen is in the ring but before he can speak, we are interrupted by a very familiar siren, the sound that usually ushers out Outlaw, Inc. They have Cliff Compton’s hat with them and tell Steen that they took care of the Compton problem for him. They want Steen to join their group, to join a real clique, a group of guys all screwed by Sinclair. Steen respectfully declines based on his past group experiences. Before he can leave, the Outlaws drag him back into the ring. Before anything escalates, Nigel McGuinness and the referees hit the ring to keep everyone pulled apart. Nigel has some hair. He says they can fight, but it has to be an official match and OI has to choose which of the two will wrestle Steen next.

We return from break and OI rochambeau to see who will face Steen. Homicide wins and the fight is under way. Kingston hops on commentary and makes some Steen fat jokes. KK asks what is up with Compton, but Eddie deflects back to the action in the ring. Steen controls as Eddie takes shots at Sinclair and is surprised that KK admits Homicide is a former ROH champion. Steen is dumped outside but catches Homicide with a right hand as leaps out off the apron. Nigel and a referee have gone to the back as Eddie wonders why a loser Brit runs an American company. Corino wants to know the OI agenda, especially with regard to Steen. In the ring, Steen hits a spinning slam for a near fall. Steen eats a back elbow on a charge and Homicide takes advantage with a tornado DDT for a two count. Steen hits a senton off the top rope as Eddie continues to bitch out Sinclair and the production truck as he talks over KK. He talks shit about Bobby Cruse as well before dumping his mic and checking on Homicide. As they commiserate at ringside, Steen dives into both of them off the apron. Back inside, Steen sets up the package piledriver but Eddie slips in and clubs him across the face to draw the DQ. OI works Steen over and then things get violent as Homicide grabs the ring bell and mashes Steen in the back with it. Before Eddie can duck tape Steen up, Compton actually shows up and makes the save. OI bails as Compton points Steen’s way, chair in hand. Before anything further happens, we take a break.

After a break, Nigel is back in the ring. He discusses Supercard of Honor, coming to New Orleans in April. Before he can reveal the World Title match for that night, he is interrupted by Jay Briscoe. Nigel talks about the incredible depth of credible contenders for the title and confirms that Briscoe is one of them. Briscoe reminds Nigel that he defeated Adam Cole down in San Antonio, so he is now the man who never got beat for the title and has now defeated the Champion as well. He claims there should only be one man walking around with the claim to the title, and Nigel agrees with that assessment. Nigel says the only way to clear this up is to hang both titles above the ring and pit Cole and Briscoe against each other in a Ladder War. Well, there you go. SCOH main event set and we will finally find out who the true champion is. Adam Cole now joins us and he is not very happy with Nigel, natch. He runs through all the reasons why he shouldn’t have to have this match and believes Briscoe has bullied Nigel into this whole mess. He is confident there should be no dispute and he is the true champion. With all that said, he accepts the match to get this done. As Cole distracts him, Mike Bennett sneaks in and drops Briscoe with a low blow (to the “naggets”). They stomp on Jay until Mark makes the save. As Bennett and Cole back off, Maria slinks out of the back with an evil grin on her face. Seems to be a whole lot of alignment in ROH these days, which is cool by me.

We are back from break and take a trip through the saga of Truth Martini and Matt Taven that has evolved over the past few months.

Taven hops in on commentary as Jay Lethal makes his way to the ring, hungry to regain some gold. Ciampa is out next and goes right at Lethal as Taven and KK recount the past between these two, including Ciampa’s knee injury that occurred in a bout with Lethal. Ciampa eventually gets his vest off but not before he lays down the wood for a few moments. Both men eventually end up back inside the ring and trade a series of right hands. Taven talks about the reasons he felt he lost at Final Battle, including getting caught up in the Hoopla. He also confirms his relationship with Martini has been severed. Lethal gets a flurry but crashes to the mat when Ciampa dodges a springboard dropkick while Ciampa was on the apron. The champ then yanks Lethal out of the ring and swings him into the barricade. I do enjoy how Ciampa always takes the fight to the floor and utilizes all the furniture at ringside. He does it so frequently that feels like a part of his strategy and arsenal. Lethal avoids a running knee and takes Ciampa over with a hip toss. Back inside, Lethal lands a brainbuster for a near fall. The crowd is pretty split here, rooting for both guys. Ciampa tries to come back with some chops, but Lethal keeps the pressure on, picking up a two count with a snap legdrop. Lethal gets caught with his head down and eats a boot and a lariat but stays alive. Ciampa follows that up with a big superplex that takes us to our last break of the night.

When we return, Ciampa is laying some boots in, talking smack along the way. Lethal caught some daylight and tried for the Lethal Injection, but Ciampa blocked it with a lungblower for a near-fall. Taven talks about the additional damage Ciampa does with those moves thanks to the big knee brace he wears. Lethal is able to knock Ciampa outside and follows after him with three diving spears through the ropes. #CRASHANDBURN! The third spear actually sent Ciampa spilling into the fans. Lethal chucks him back in and hits the Randy Savage elbow for a two count. Ciampa recovers and both men spill to the apron where he hits Lethal with a Celtic Cross on the edge of the ring. As both men recover on the floor, Truth shows up and walks down. KK says he looks like the devil, but Taven argues he looks like the Kool-Aid Man. Both competitors barely beat the count inside, but both are clearly worn down. Ciampa avoids a Lethal charge and takes him over with an inverted DVD for a near fall. As Ciampa gets too close, Lethal turns him into a submission hold that the champ eventually turns into the Sicilian Stretch. Lethal grabs the ropes to break it as Taven and Truth start to jaw at ringside. Taven finally snaps and starts choking out Truth. Meanwhile, Lethal has Ciampa down for the count with a roll up but the referee was distracted by Taven and Truth. The champ wriggles free and hits Project Ciampa to retain. Lethal and Ciampa argue over the finish as we fade out.

Outside of a very good main event, nothing standing out in the ring this week, but we had plenty of storyline development, with new teams and factions established and a major match announced. Until next week, take care and respect the code!