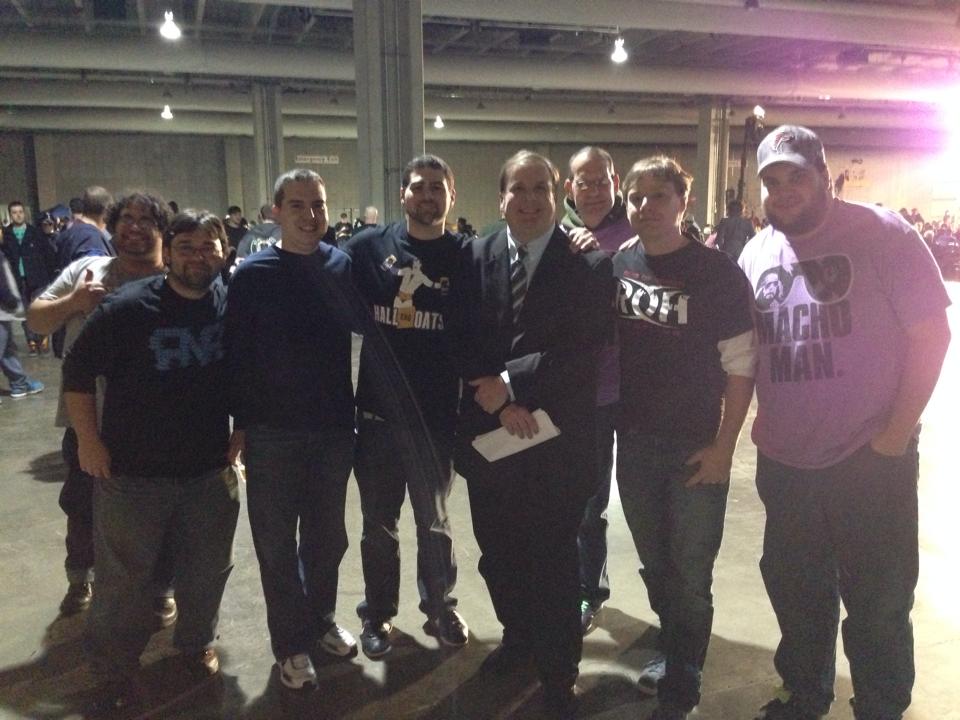 We open this week with the opening animation before heading inside the arena where we are live at the David L. Lawrence Convention Center in Pittsburgh, PA, where PTB Nation was in the house en force over Royal Rumble weekend. Kevin Kelly & Steve Corino welcome us to the show and then toss us right over to the ring for our opener!

Adrenaline Rush vs. The Decade

The Pittsburgh fans are pretty hot for ACH, who has to be due for a push coming soon here. Whiter & Jacobs represent the Decade here tonight, and Roddy Strong is out to lend support. Corino’s never-ending hate for Whitmer is great. Jacobs and TD kicks things off as KK surmises that Rush needs to earn the Decade’s respect before they honor the code. TD controls a bit, but Jacobs does his best to battle back, leading to a stalemate. KK talks about the return of AJ Styles, who next wrestles at the 12th Anniversary Show coming up later this month. ACH tags in, dumps Jacobs to the floor and flies outside with a plancha. Back in, he keeps the assault on, until Whitmer hops in the ring and flings Jacobs into ACH to turn the tide as we hit a break.

When we return, the Decade is in control of the match. I must say, I like the Decade’s pink, silver and black coordination. I am always a fan of tag teams wearing similar gear. They also have some nice tag chemistry in there, so this may be a situation similar to the New Age Outlaws back in the day, where these two guys as a team is way more valuable than they were working solo. ACH buys a breath with a really nice snap drop down from a seated position where he pulled Jacobs face first into the bottom turnbuckle. TD tags back in and unleashes his capoeira assault on both Whitmer and Jacobs. Rush continues to fly as TD chucks both opponents to the floor and then follows with a somersault senton through the ropes. ACH tries the same, but BJ slips in the ring and decks him to cut him off. TD is back in as well, but BJ sweeps him down with a double leg takedown, allowing Jacobs to hit a springboard legdrop for two. ACH is back in and works BJ over with some kicks and a spinning springboard flatliner. Corino thinks Rush should be in line for a title shot, win or lose here. TD ends up on the apron, allowing Jacobs to spear him off and down into the railing on the floor. Back inside, ACH picks up a couple of near falls on BJ before eating a boot to the face. With TD still down, Jacobs slips back in and the Decade hits the All Seeing Eye for the victory. Hard to complain about the new team going over clean, but Rush could have used a win as they head towards a match with reDRagon in San Antonio.

When we return, KK takes sets up the Top Prospect Finals for us, taking us through the previous rounds and talking about the two finalists. After that, we head to the ring for the match.

Mark Poirier’s man, Hanson, is out first and ready to roll. Of course, the winner here earns an ROH TV Title match in the future. This should be a great battle of old school hoss talents. The beef is flying right off the bell, as Rowe hits Hanson with a clothesline that sends both men to the floor. Rowe slides back in and tries for a plancha, but Hanson decks him in the head before he can take flight. Hanson mauls Rowe in the ring as Corino puts over how Rowe has really gotten himself into great shape. Michael Elgin is in the aisle watching this one unfold, and Corino reminds us that the last time he got involved in this tournament, Kongo ate a powerbomb. Rowe starts to slug his way back into it, but Hanson just drills him with a knee to the head to put him back down. He follows with Snake Eyes but the two men collide in the center of the ring, and Hanson is the only one to go down. Rowe follows with shotgun knees and a big German suplex for a near fall. These two guys are really laying it in. Hanson whiffs on an axehandle, which allows Rowe to deadlift him for a stiff spinebuster and a near fall. Hanson fends Rowe off but comes up empty on a corner charge. The two behemoths then trade German suplexes, but Hanson comes out ahead after he dodges a backdrop with a cartwheel (!) and puts Rowe down with a clothesline. Rowe ducks the spin kick and counters with a powerbomb but Hanson stays alive. Hanson avoids the Death Row and finally connects on the Spin Kick of Doom for the big win. That was a hella fun big man brawl, with each guy tossing bombs and delivering ring shaking power moves. Both of these guys should be ROH mainstays throughout 2014. Hanson will get his title match in Philadelphia at the Anniversary Show. And then after his huge win, Hanson had to fend off a stalker. 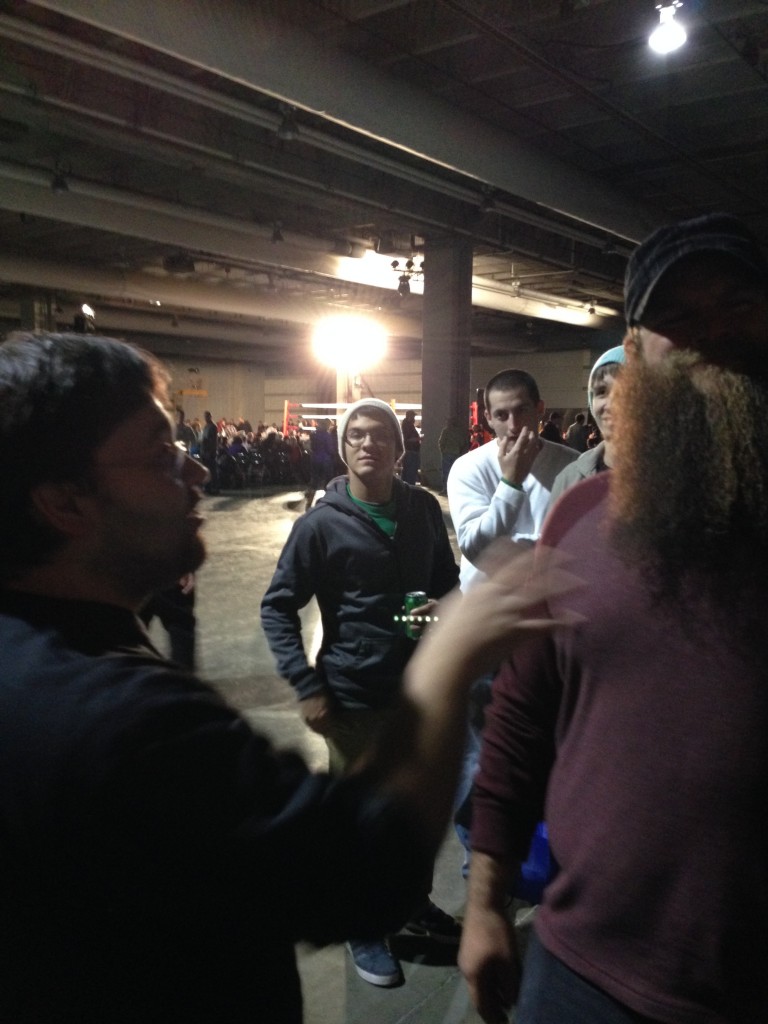 Before the match, we go back to Final Battle when Ciampa wrecked the HoT and won the TV title, followed by clips from TV of Matt Taven and Truth Martini severing their relationship. Although, Taven is still using Truth’s theme and has the Hotties with him, so that is an odd twist. And now Truth comes out, dressed like the American Badass Undertaker, and talks about his beef with Taven’s latest turn in attitude. Truth fires the Hotties and proclaims Hoopla to be dead. Taven gets his say in as well, thanks Truth for the opportunity and guidance and then fires him. Truth leaves and we take a break.

When we return, Lethal and Ciampa make their way out and we are finally underway. Things get off to a fast start with all three men hammering away at each other amidst a pile of streamers, which lends to a cool look. Lethal is on fire out of the gate, flying out of the ring with a pair of suicide dives to wipe both men out as we hit a commercial.

After a break, Ciampa has regained control and both opponents are down on the floor. Ciampa pulls up the protective mat and cues up a suplex on Taven, but Lethal breaks it up. Ciampa scoops up Lethal and rams him into the barricade and then finally hits that suplex on Taven. Truth is back and has hopped in on commentary, where he gets some more shots in on Taven. In the ring, Ciampa is working over Lethal, smashing him with a running knee in the corner. Taven is back in and avoids Project Ciampa, turning it into a modified Angel’s Wings for a near fall. Corino asks Truth what his future plans are as far as scouting  talent. Truth says he is still out here to support Taven and is not moving on yet. Lethal comes back with a superkick to Taven, but he pops back up and hits a spin kick to Ciampa, who had scooped up Lethal for a powerslam. Ciampa is the first back up and hits a falcon arrow for a near fall. Lethal grabs Ciampa and hits the Lethal Combination and transitions into the Koji Clutch, but Ciampa gets the ropes to force the break. Lethal follows with the Injection, but Taven crashes down on him with a frog splash to pick up a near fall. Truth slips his Book in to Taven, and Matt contemplates using it. Truth eggs him on and then gets on the apron to discuss it, but instead Lethal shoves them together and superkicks Taven to the floor. Lethal gets a small package for a visual pinball, but the referee was tied up. Lethal survives the Knockout Knee but then gets tossed outside as Taven makes his way back in, but is tripped up by Truth. Ciampa takes advantage and hits Project Ciampa for the win. That was a fun sprint and there was still a lot of gas left in the tank of these three, so maybe we get a rematch in the future. The fans loved it as well, and we get a stare down by all three men as they all shake hands.

Well, I lived this one twice and enjoyed it both times. I really dug the Hanson/Rowe throwdown and look forward to the development of both. The opener was solid and the main event was a lot of fun too. Ciampa’s build continues to be strong as he advances his way up the card as well. Until next week, take care and respect the code!