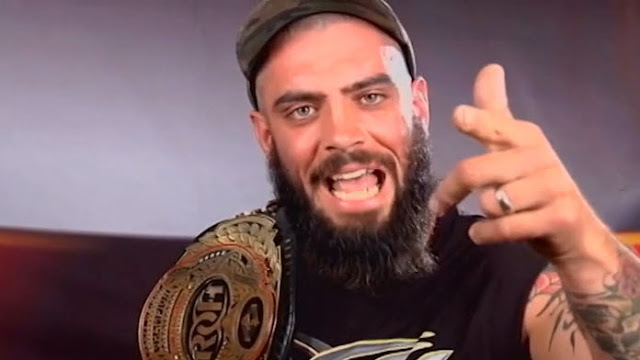 We kick off this week’s episode with our opening animation and then head inside the Nashville Fairgrounds as Kevin Kelly welcomes us to ROH wrestling. There is a lot on tap, but we open with the semifinals of the Top Prospect Tournament.

Ray Rowe is out first, still sporting his Napoli beard. KK refreshes us on how Hollis got here, thanks to an almost forfeit win and a victory over his tag partner. No Steve Corino yet tonight, and no Prince Nana either. The finals of the tournament go down in Pittsburgh, at the tapings recorded the very night this is airing. Hollis shakes Rowe early with a boot to the face and continues to out hustle the big guy, sticking and moving before knocking Rowe to the floor with a dropkick. Hollis dives out after him and then chucks him back inside. I love KK and he is doing A-OK here, but I miss me some King Corino right now. Rowe turns the tide and gets a near fall, followed by an overhead belly-to-belly suplex. KK notices Rowe is favoring his ribs, which Hollis seemed to target early on. Rowe uses his power to land a nice powerbomb for two. Rowe picks him back up and cracks him with the Knockout Knee for the win. That was a hella swank finisher, hache mache! Rowe advances to the finals in Pittsburgh!

We are back from break and head right to the ring. RD has Veda Scott with him as KK lets us know he claims to be on an undefeated streak, sitting at 13-0. Corino is in the booth and already laying it on thick, gushing over the 13-0 record. The Nashville crowd is pretty into Evans here. Max “Sex” Sells may be the weirdest gimmick name this side of Zip. He looks like the son of Dave Schultz and Pete Doherty. Evans fends off an early flurry and starts to work over Mr. Sells. Corino gets the early line of the night: “Even when I book a territory, I can’t win 13 in a row”. Veda tells us that he true top prospect is in the ring right now. Veda distracts Sells, allowing RD to strike and hit a splash off the top rope to win and push the undefeated streak up to 14. Veda hops in the ring and puts over RD and then issues an open challenge on behalf of RD, trying to push the streak even higher. And just as she name drops Michael Elgin, the Unbreakable one makes his way out.

As the bell sounds, Corino gives us RD’s obituary, noting his “several” illegitimate children. RD tries to observe the code, but Elgin slams him down instead. Elgin massacres RD on the floor as he issues a warning to Adam Cole. Elgin is just beating the piss out of him as Veda is in shock at the commentary table. Elgin continues the assault in the ring until Evans actually lands a strike to knock Elgin down, a victory in its own right. RD heads up top, but Elgin dropkicks him to the apron and the deadlifts him back into the air, holds him for twenty seconds and takes him over with a superplex. A bucklebomb and Elginbomb later, the match should be over, but instead of pinning RD, Elgin goes to the floor and grabs a pair of chairs. He sets them up in the ring and powerbombs RD onto the open seats giving RD the DQ win. Veda couldn’t care less that RD is dead as she celebrates his streak living on. Corino loves it too. RD is 15-0! Elgin wants more, but security gets involved to stop him.

Well, looks like we are getting a very wrestling heavy show this week, however with a parade of matches instead of the standard two to three big bouts. This is a 2013 Top Prospect Tournament Rewind, taking us back to the finals of last year’s tournament. KK talks about the tough trek back after losing a title, and Corino mentions about it becoming a confidence issue. They work the mat a lot early, trading holds and strikes until TD connects with a stiff kick to the face. Taven comes back with a missile dropkick as KK reminds us how Truth Martini first offered a slot in the HoT to TD before turning to Taven after being rejected. Corino still refuses to discuss SCUM, just claiming that he wants to watch the DVD about it when he gets a copy sent his way. TD starts to make his comeback as the crowd rallies him a bit. He knocks Taven to the floor and then flies onto him with a moonsault. Corino drops his weekly “whoa” reference!

Back inside, Taven catches TD with a superkick as he comes off the top. He then scampers up himself and comes crashing off with a frog splash for the victory. That was a solid match and it is clear that Taven has won this war, beating TD in back to back January bouts. They shake hands and we head to break.

After commercial, Jay Briscoe makes his way out, begging Cole for an answer to his challenge. He even quotes the great Roddy Piper. And a champion does answer the call…but it is Bobby Fish and not Adam Cole. Fish lays some serious trash talk down about Briscoe being delusional with his made-up belt. He accepts Briscoe’s challenge on behalf of Cole, with Briscoe’s title on the line and that match will take place next.

After a break, the match is under way as they two feel each other out a bit. KK talks about how Briscoe began to unravel when he had to forfeit his title last year. After a quick brawl on the floor, Briscoe works Fish over in the ring, not giving the tag champ one moment to catch his breath. As Briscoe keeps the heat on, we take a break.

After commercial, Fish still cannot get on track at all, with Briscoe all over him out on the floor still. Fish finally slows him down and slugs away on the floor as Corino lauds Fish for standing up to Jay on behalf of everyone in the locker room. Fish starts to pick Briscoe apart back inside the ring, picking up a near fall on a back suplex. Corino puts over Fish’s extensive international success as Fish gets another near fall after a kick to the chest. Fish hammers away at the midsection until Briscoe utilizes the headbutt to gain an advantage. Corino talks about how it is smart for Cole to avoid Briscoe because he really has no reason to face the man. Agreed! Jay takes things up a notch as he feels Fish is on the ropes. He drops him with a Falcon Arrow for two and the crowd has woken back up after being a bit quiet for the final leg of these tapings. Jay loads the Driller, but Fish shoves him back to the corner to bust it up. He comes back with a flurry of kicks but Briscoe kicks out at two. The two battle on top until Briscoe shoves Fish to the mat and comes flying off with a splash. With both men down and out, Adam Cole saunters down to the ringside, smug look adorned on his face as a true champion should have. Briscoe has Fish reeling a bit, but Cole grabs Jay’s title, distracting him long enough for a Fish low blow and Saito suplex…for two! Very good near fall there. Cole gets up on the apron, but Jay shoves Fish into him and then grabs him on the rebound and hits the Driller for the win. Cole is not happy. Me neither, bud. Cole tries to deck Briscoe with the belt, but Jay ducks the attempt and Cole bails to the floor. Jay now has both titles, which he raises high in the air to take us out for the week. That was a fun little match with a lot of energy, as expected with who was involved. Plus, it is always a treat seeing Cole.

This was very much a filler episode, but still had plenty of good, solid wrestling, albeit with no stand out match, and some low level storyline advancement. Next week brings us the much anticipated return of AJ Styles and then we head to Pittsburgh for Wrestling’s Finest.

Until then, be sure to check out the brand new Kevin Kelly Show exclusively at Place to Be Nation! In Episode One, Kevin chatted with ROH World Champion Adam Cole, plus much more. Until next week, take care and respect the code!